The Great Bison Roundup took place for its 53rd year Saturday with more than 275 ranchers gathering to put 700 bison to the test in Utah.

Antelope Island’s annual event is known for being dangerous for both the humans and animals who participate each October, as the animals that can weigh up to 2,100lbs charge after equestrians.

On one occasion KyAnn Betz, who has been attending for six years, got a nasty scare when she had an outfit slip up.

The gathering took place on Antelope Island, Utah to allow bison to have medical checks and receive vaccinations 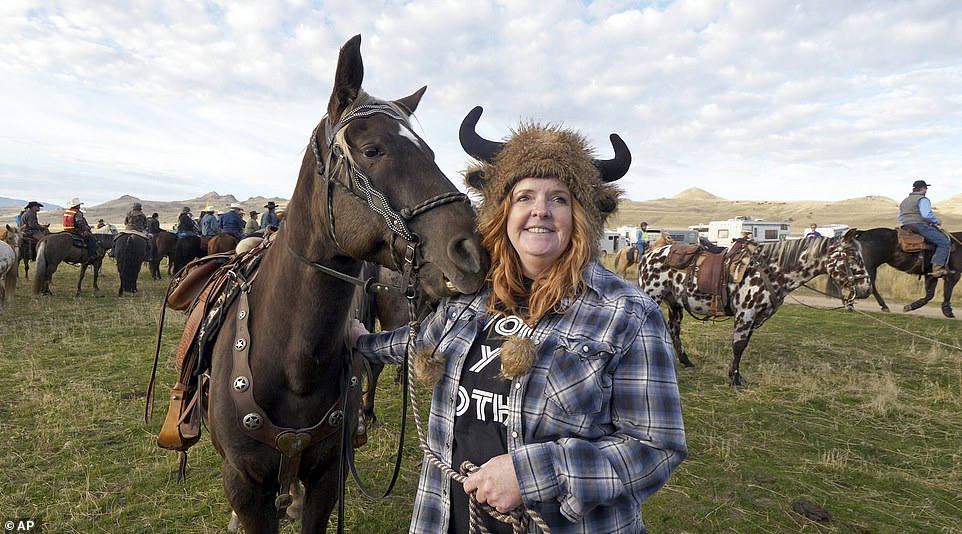 KyAnn Betz has been attending for six years, got a nasty scare when she had an outfit slip up on one occasion 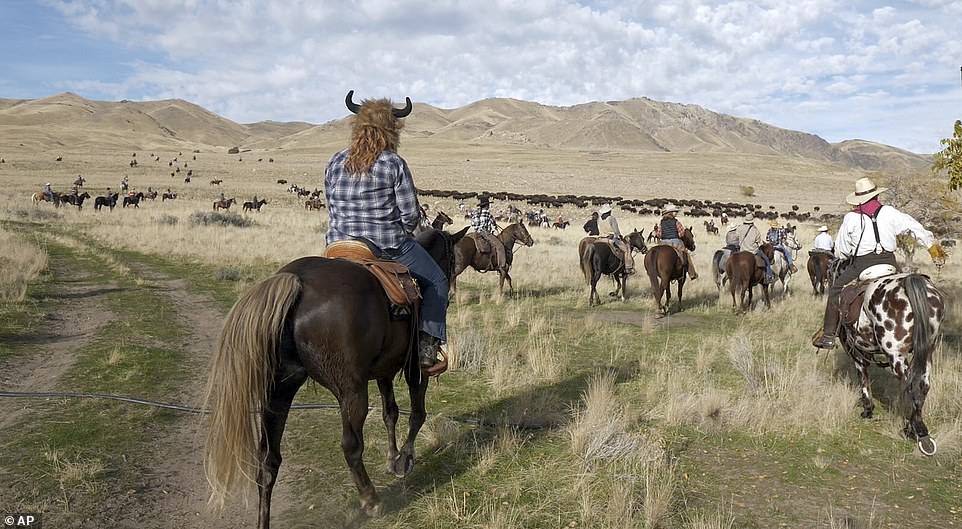 ‘I got bucked off a couple of years ago in a perfect storm, where my saddle had just been oiled and I was in the wrong gloves, and we were coming downhill and my horse got nipped from behind, and I went up and over a flank,’ she told Fox 13.

The tough woman got right back in the saddle though.

‘But I was fine. Nothing was hurt but my pride,’ she continued. 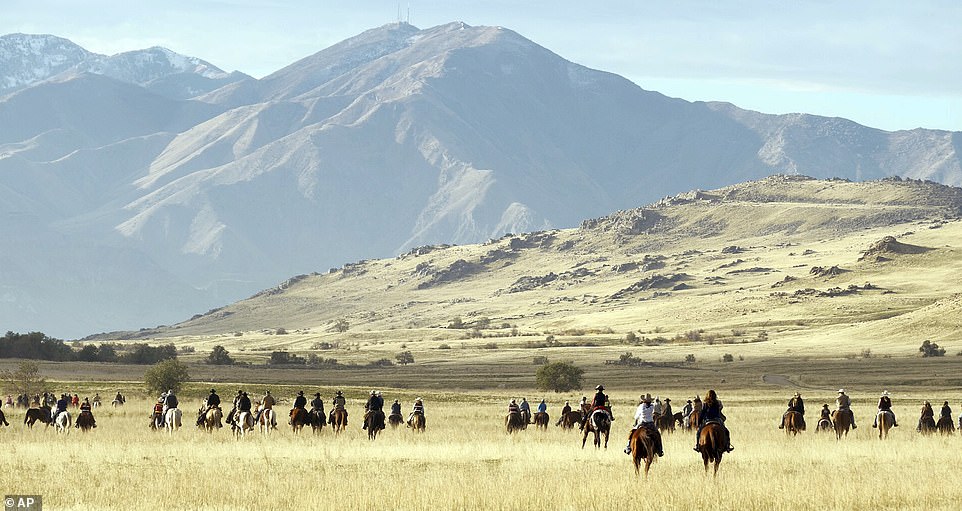 The annual event includes riding through canyons. Utah State Parks workers are moving the animals from across the island so they can be weighed, tagged and given health checkups 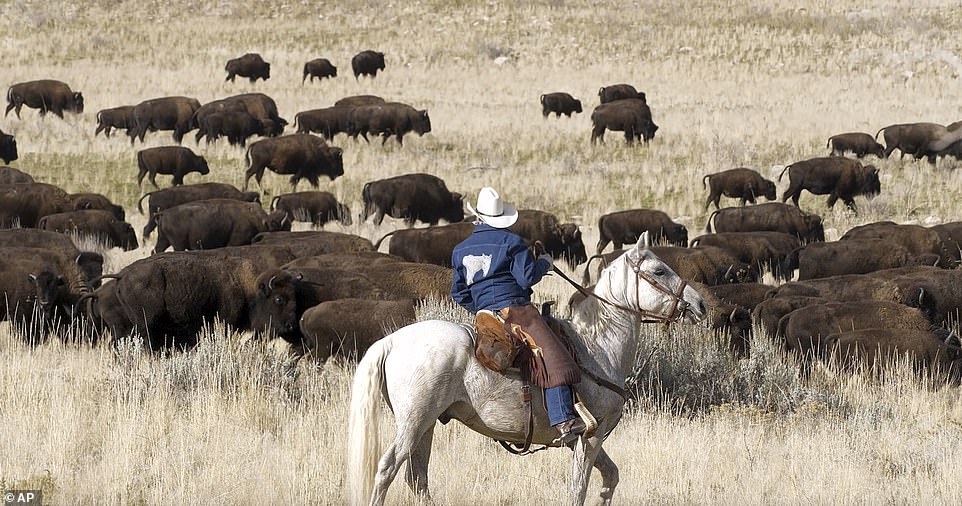 Don Bradshaw, Betz’s father, recalled a time when his horse was injured by a charging bison 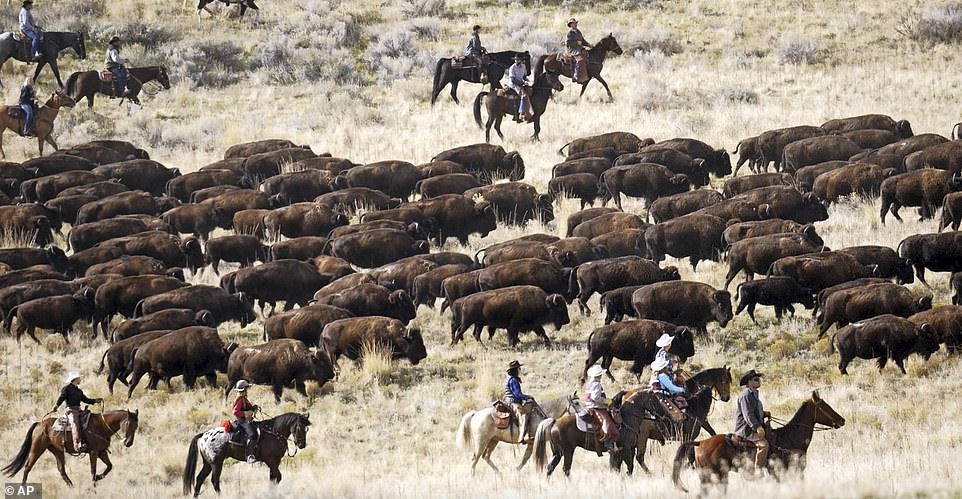 It’s nothing in comparison to what can happen to the animals though.

Her father – who outdoes her attendance record with his 20 years at the event – shared how bison can literally tear the horses a new one when they catch up to them.

‘What the buffalo do is they’ll charge the horse, and by the time the horse gets turned around, they hook him right here,’ Don Bradshaw said while referencing the rear. ‘They usually just put a horn in them or they rip them.’

It’s a tough job but it’s no sport for the participants. 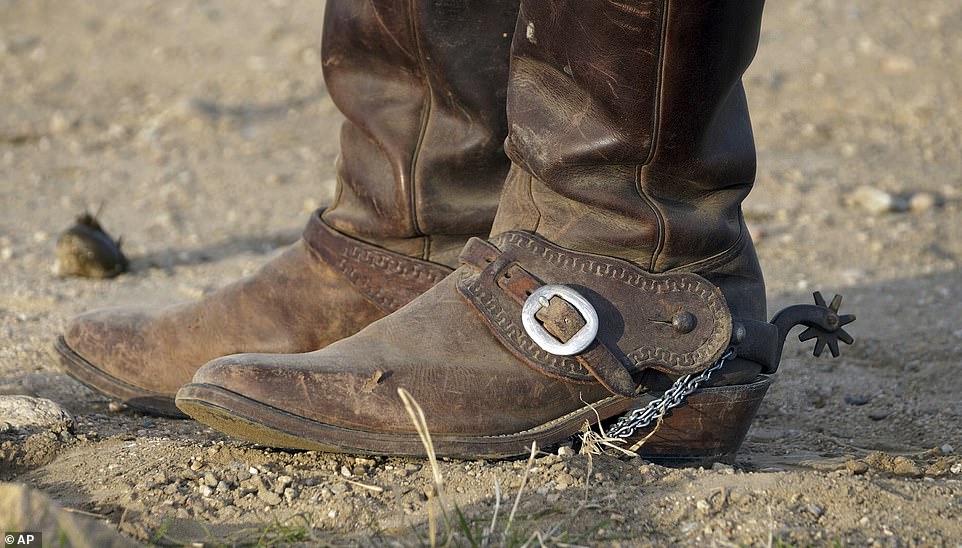 Betz describes her father as a ‘real cowboy’. Pictured are a rider’s boots during an annual bison roundup

Bison can weigh up to 2,100lbs. They charge after equestrians as they try to gather them before selling around 200

The roundup can take all day as they prepare to check the bison for diseases and injuries. Then they’re vaccinated and around 200 are sold two weeks later.

‘It’s a different ride, it’s not a trail ride. When you come out here moving the buffalo, you move much differently than you’d ride down a nice, safe trail,’ Don continued. ‘The buffalo will turn, they’ll run. They’ll head up the canyons. We have to go get them. If they go up high, they are really tough to get out.’

Funds raised go toward the conservation of Antelope Island.

A Buffalo Corral sign is shown during an annual bison roundup. The gathering has loyal attendees of 20 years