Inside the International Fireworks Festival in Da Nang, Vietnam

Not too long ago, the sounds of loud, cracking explosives in Da Nang, Vietnam were a source of fear. It was where American troops first landed during the Vietnam war in 1965, and the target of a major military campaign led by the communist North Vietnamese in 1975 — so naturally, loud, banging explosions were hardly welcome sounds in the region for quite some time.

Fast-forward just a few decades, though, and the central Vietnamese city has transformed. Now a bustling hub of business and tourism, it’s one of the most financially flourishing cities in the country, with millions of visitors swarming the coastal spot every year to enjoy the history, beaches, and now Instagram-famous Golden Bridge.

But the sound of explosions are still there — only now, they’re something entirely different. Every summer, Da Nang hosts the International Fireworks Festival, pitting pyrotechnics teams from around the world against each other in a month of incredible fireworks shows that light up the city and delight locals and tourists alike.

Real bang for your buck! The Da Nang International Fireworks Festival takes place in central Vietnam every year during June and July 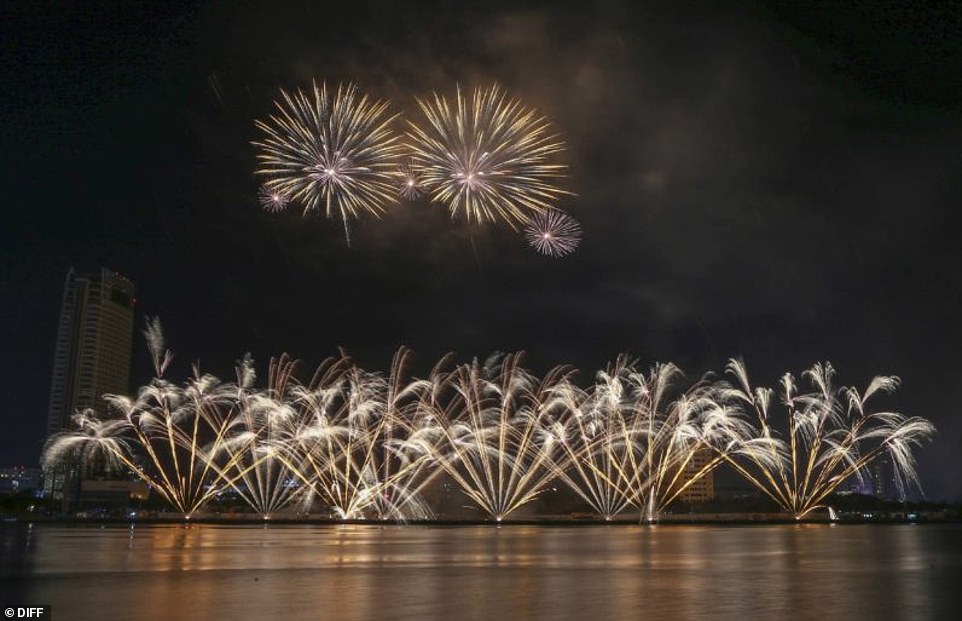 This year, international teams from the UK, Vietnam, China, Finland, Russia, Belgium, Italy, and Brazil competed over the course of several weekends 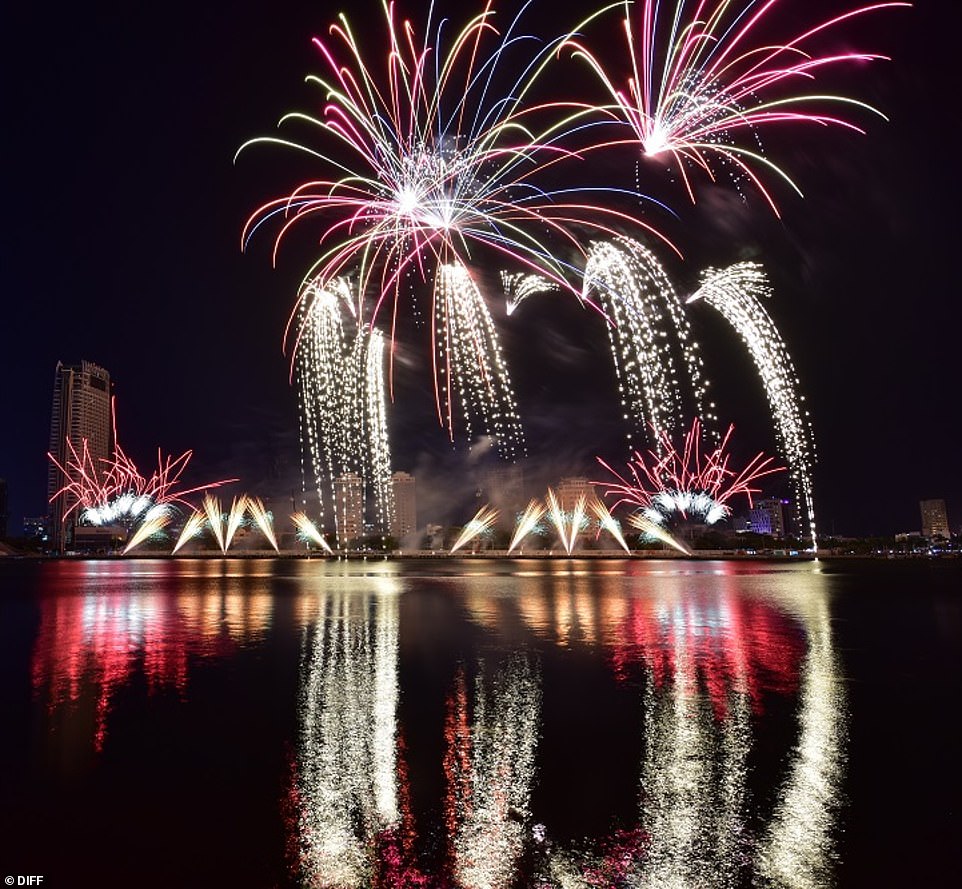 For five weeks, two teams from different countries faced off every Saturday night, with a grand finale featuring the top two performers on July 6 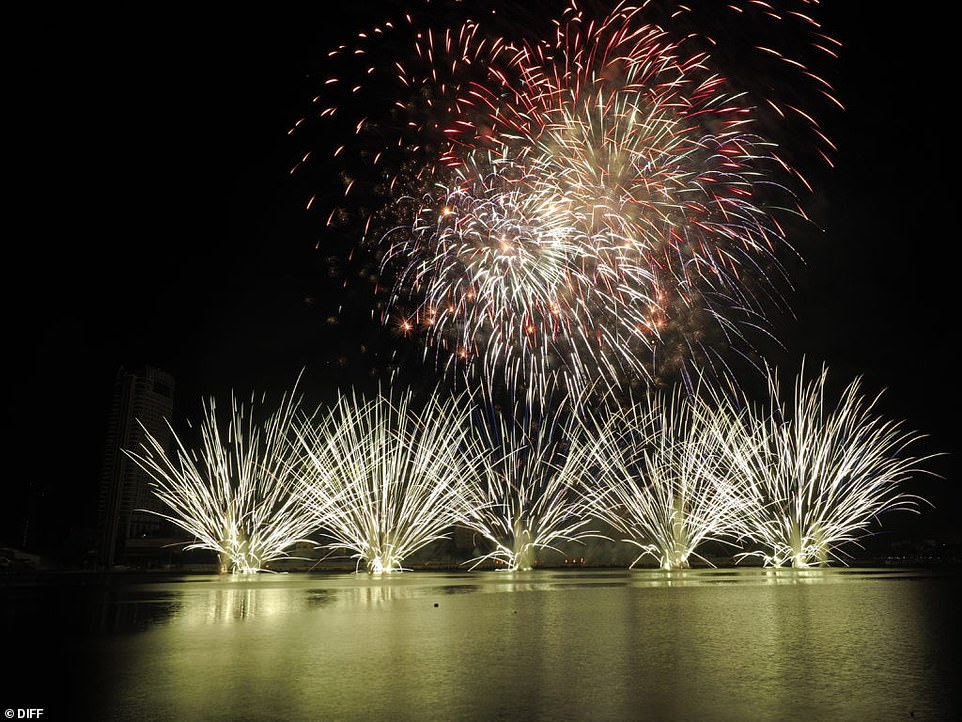 Visitors to the booming tourist city can watch the festivities along the Han River in stands, on river cruises, on bridges, and at bars and hotels 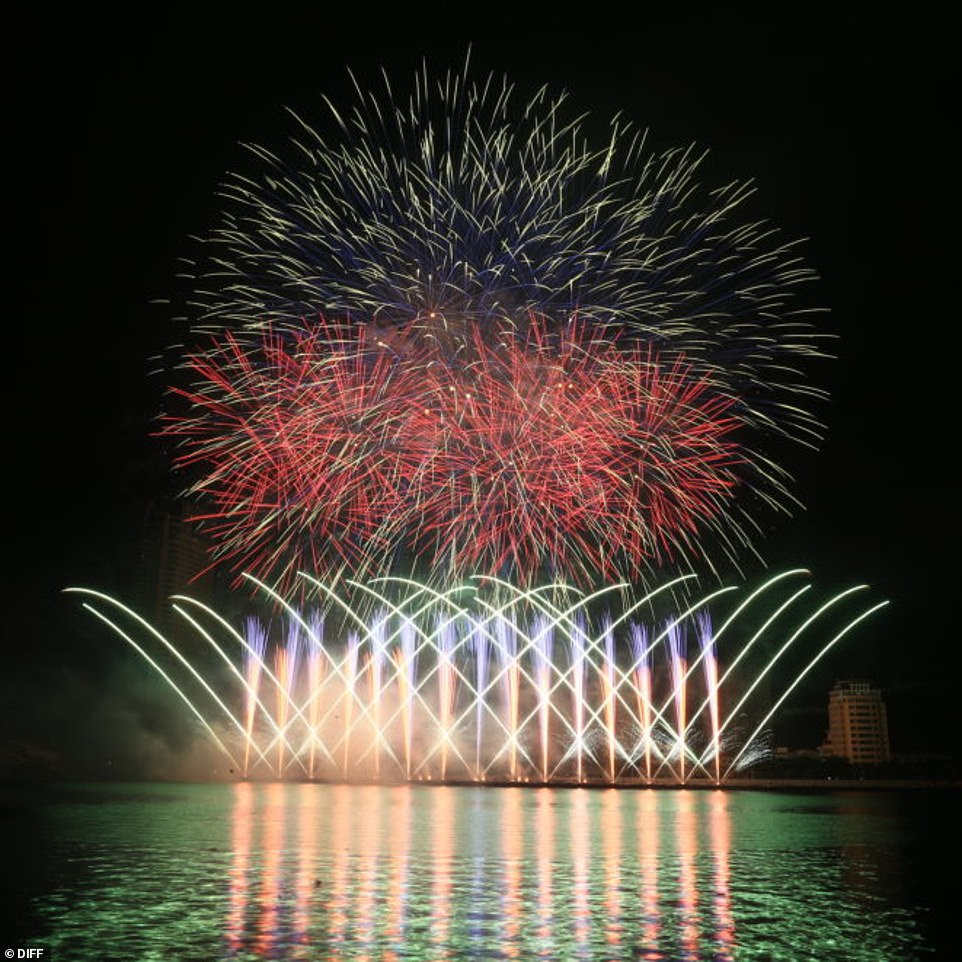 Each individual show is about 20 minutes, and the UK and Finland were picked for the final night — with Finland taking the win 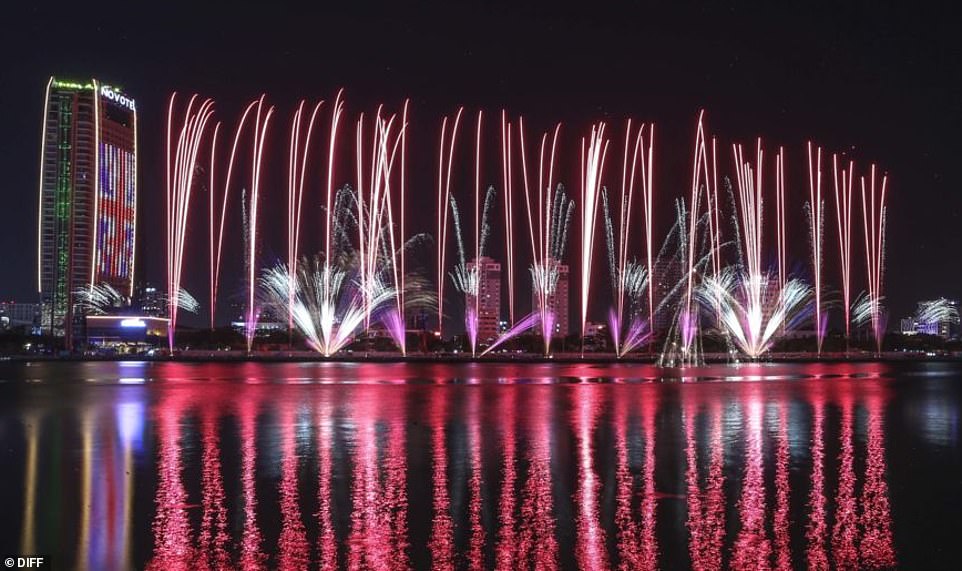 The UK team, Pyrotex Fireworx, told DailyMail.com that it took over two months to design their first show against China, which was so impressive it landed them a spot in the finale 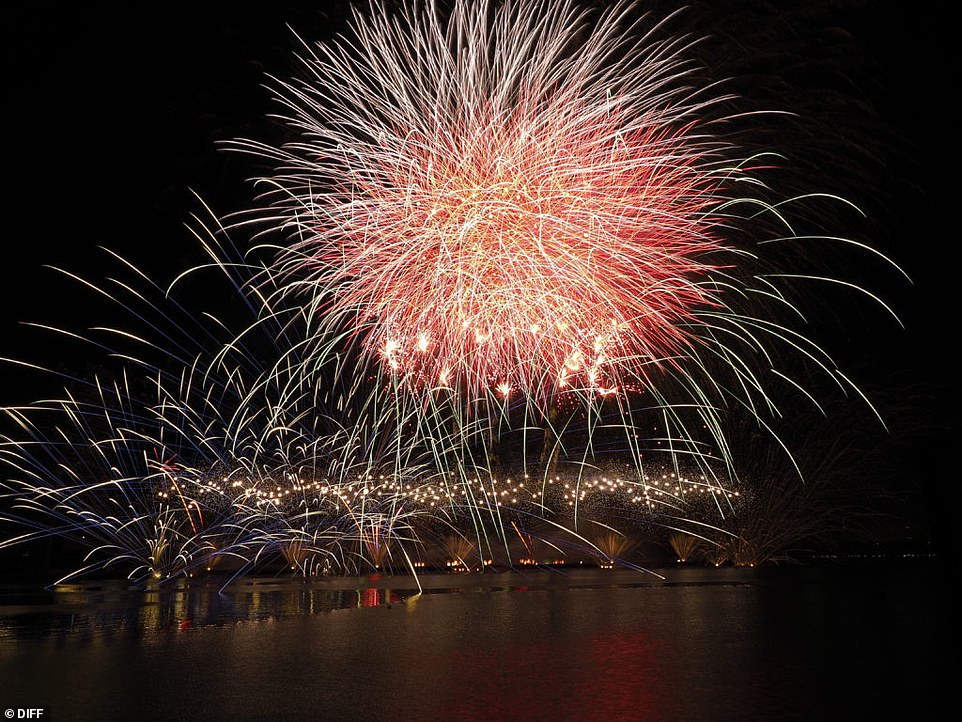 For Pyrotex Fireworx’s huge final show in the grand finale, the team only had a single week to prepare. They came in second to the team from Finland

This summer marked the tenth year of the festival, which took place over five weeks in June and July and also included street performances and a flash mob contest.

But the main attraction is the fireworks, held over the Han River every Saturday night during the weeks of the festival. For each show, two international teams compete with 20-minute displays, with two finalists chosen to take part in the grand finale.

This year’s festival featured teams from Vietnam, China, the United Kingdom, Finland, Russia, Belgium, Italy, and Brazil — with the UK facing off against Finland on the closing night with a spectacular double performance.

The UK team, Pyrotex Fireworx, told DailyMail.com that it took over two months to design their first show against China earlier in the competition, but they had just a week to bring together their show for the finale on July 6.

‘In normal circumstances, a show of this scale can take many months to design and execute,’ Scott Machin of Pyrotex Fireworx explained, adding that it was ‘very difficult’ to do it in a mere fraction of the time — ‘especially when we have been given products we haven’t used before.’ 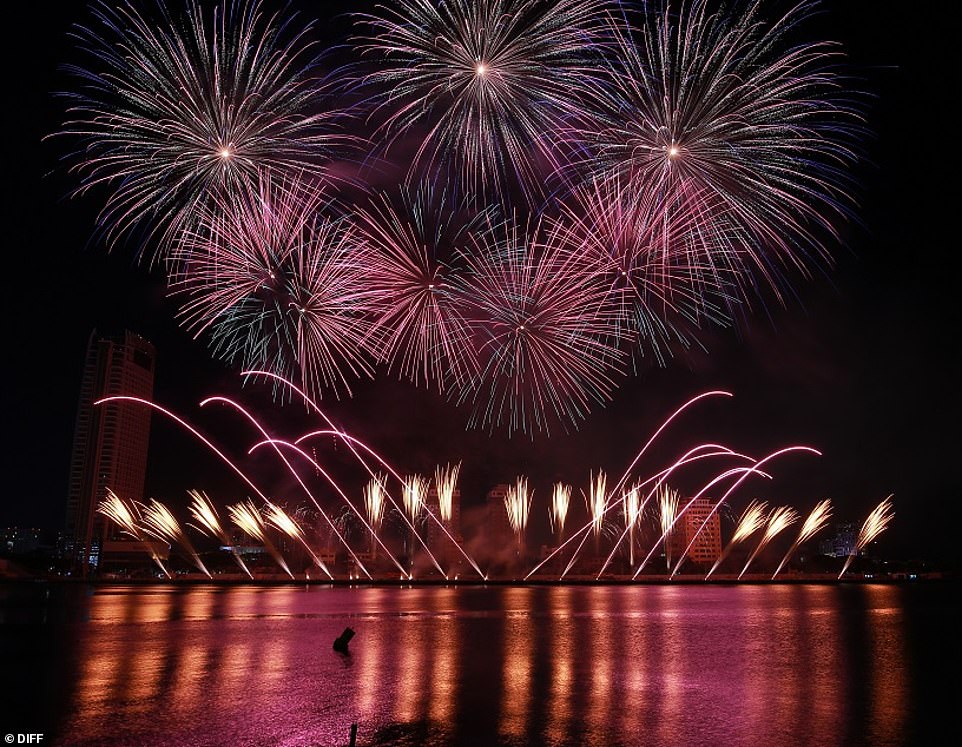 This summer marked the tenth year of the festival, which also included street performances and a flash mob contest 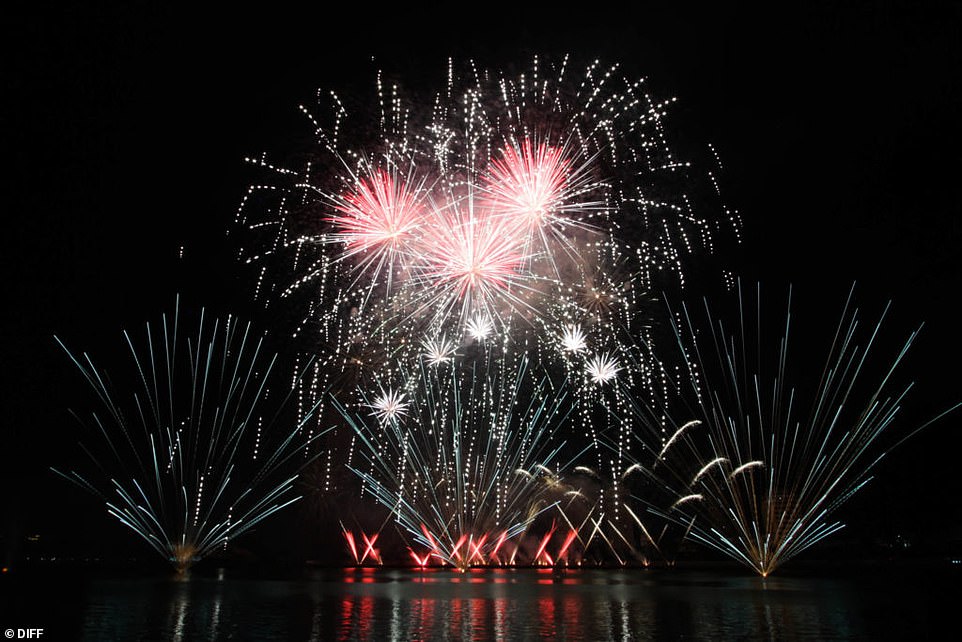 For the grand finale performance, the UK team used approximately 3,000 cues on their firing system, setting off almost 6,000 fireworks in all 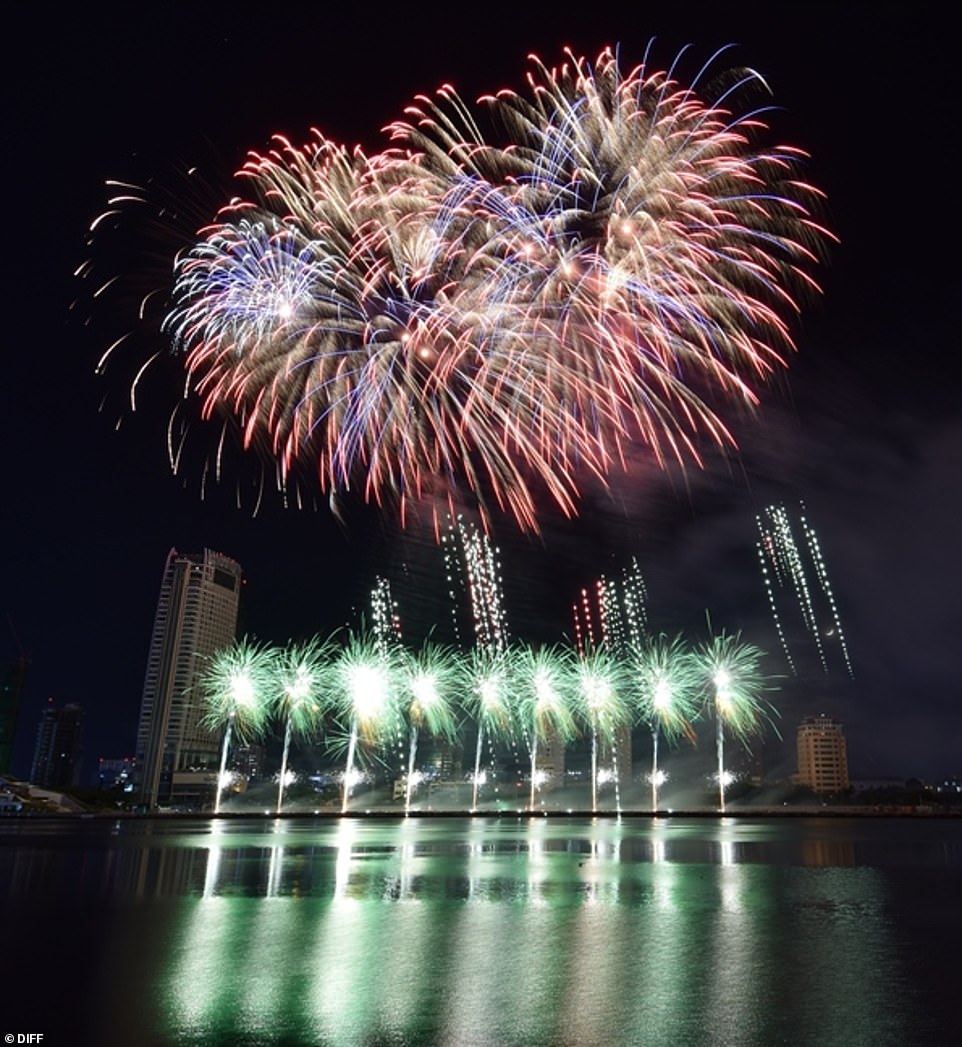 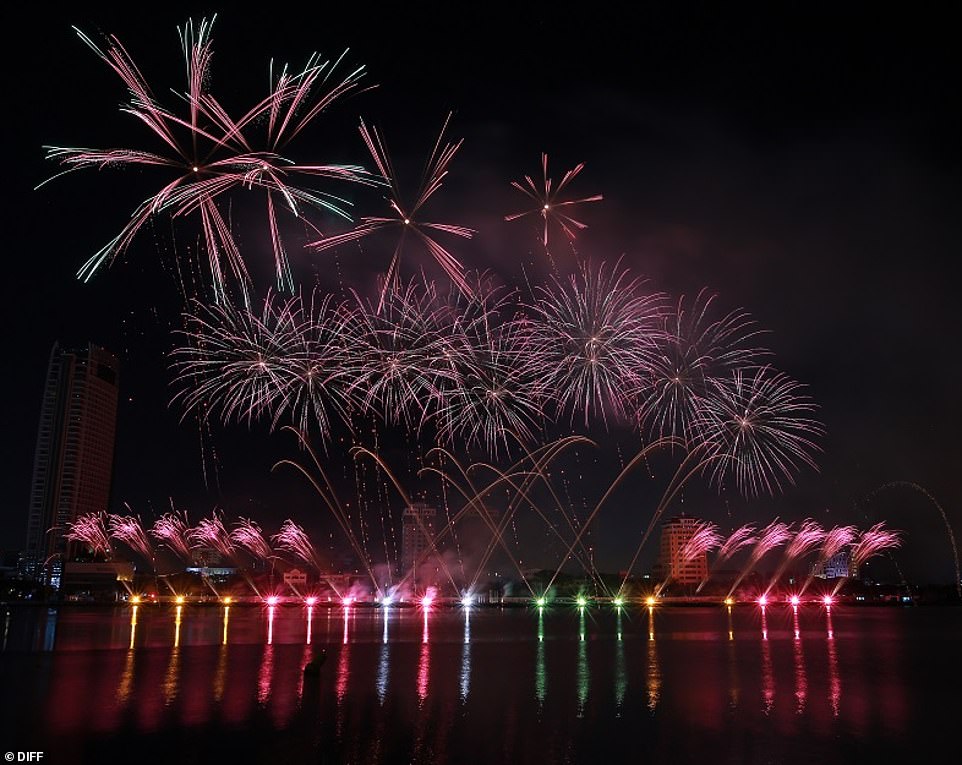 Tickets go on sale for visitors who want to sit in the stands, where they can also see a song and dance performance 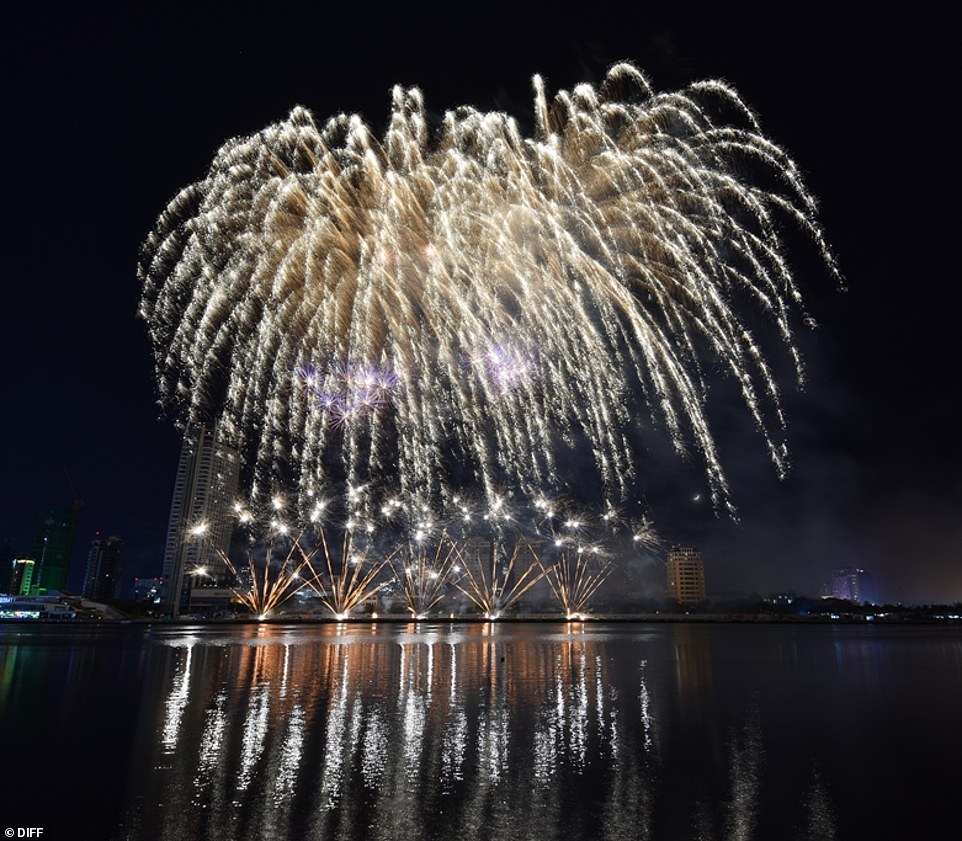 Some admirers choose to watch from riverbanks or even from river cruises, with a few that also serve dinner 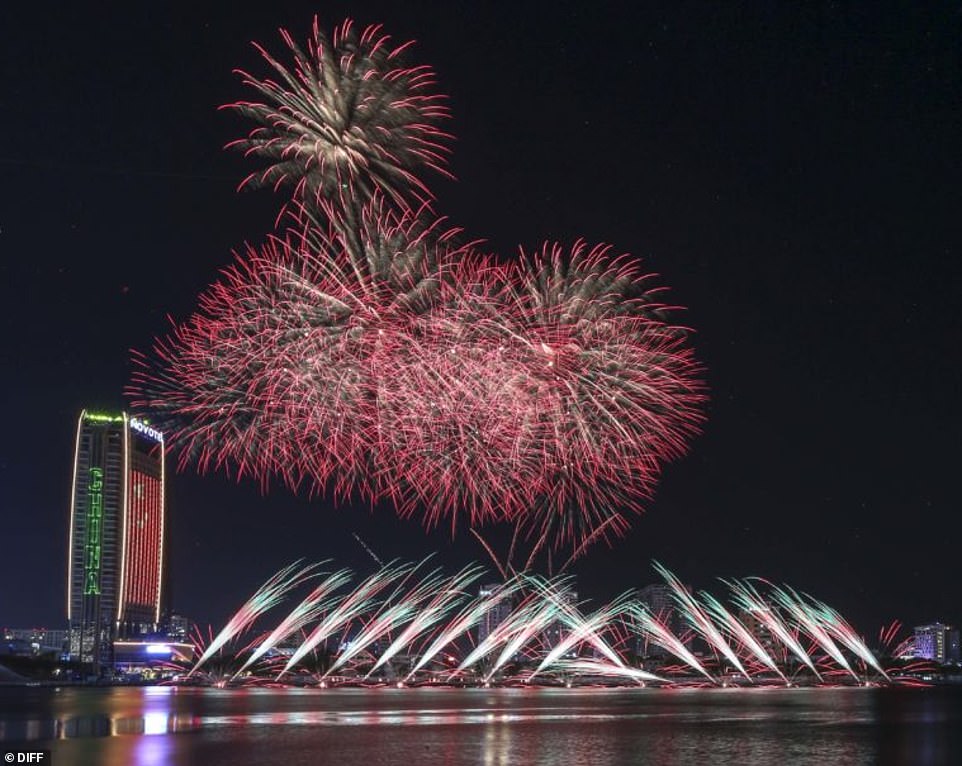 The impressive, colorful light displays are designed by top pyrotechnics teams from around the world, which travel to Da Nang for the festival 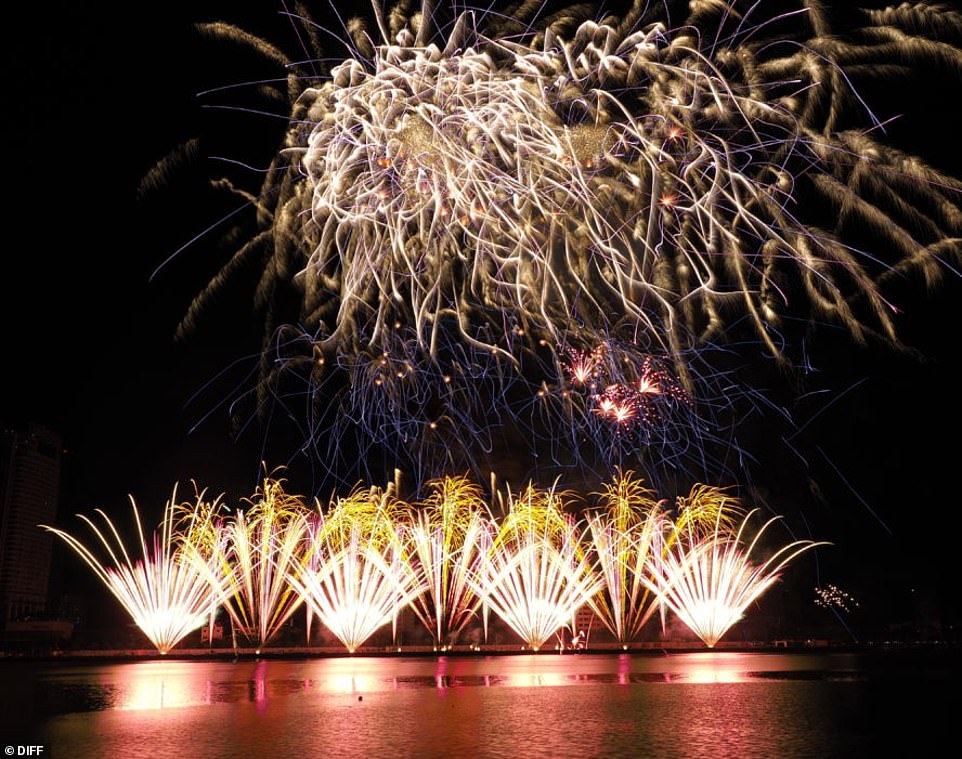 The festival has been a draw in the city, which has become a steadily growing tourist destination in recent years 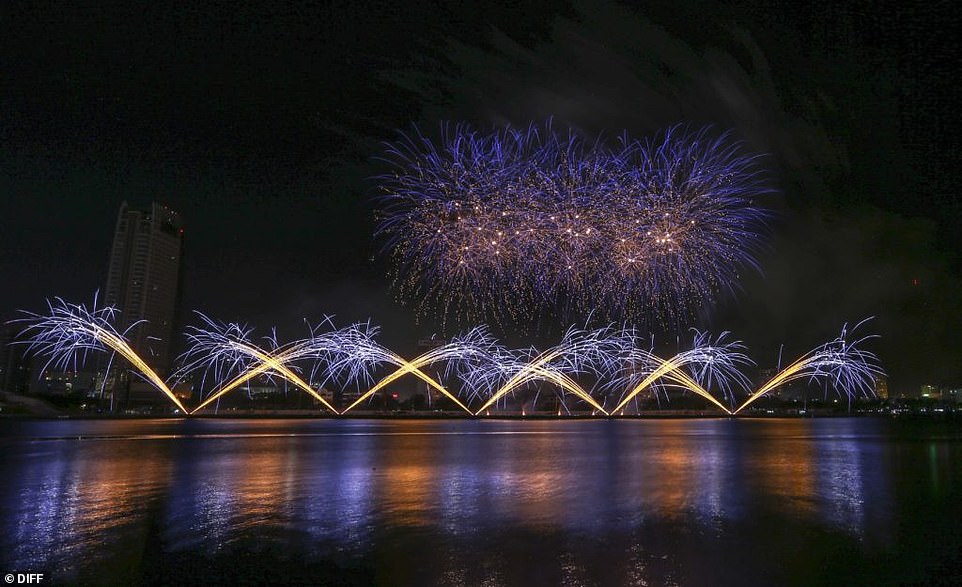 The city is unrecognizable from how it looked during the Vietnam War — or, as the locals call it, the American War

Typically, the team starts by picking out the music, then designing the show on a computer to go along with the tunes.

‘We use a number of materials for the show, items such as Shells, Single Shots, Slices, Cakes, and special effects such as Bengals, fountains, and Flares,’ he went on.

On the days leading up to the show, they spent 70 hours setting up before entertaining the crowd. For the grand finale performance, they used approximately 3,000 cues on their firing system, setting off almost 6,000 fireworks in all.

While this year they were runner-up to Finland, their over-the-top display certainly left audience members in awe.

Visitors who streamed into the city watched from a designated seating area (which sits 30,000 people), river cruises, riverbanks, bridges, and even rooftop bars and hotels.

One of the prime hotels for viewing the show is the just-opened Hilton Da Nang, which sits on one end of the Han River Bridge and has sweeping views of the water. 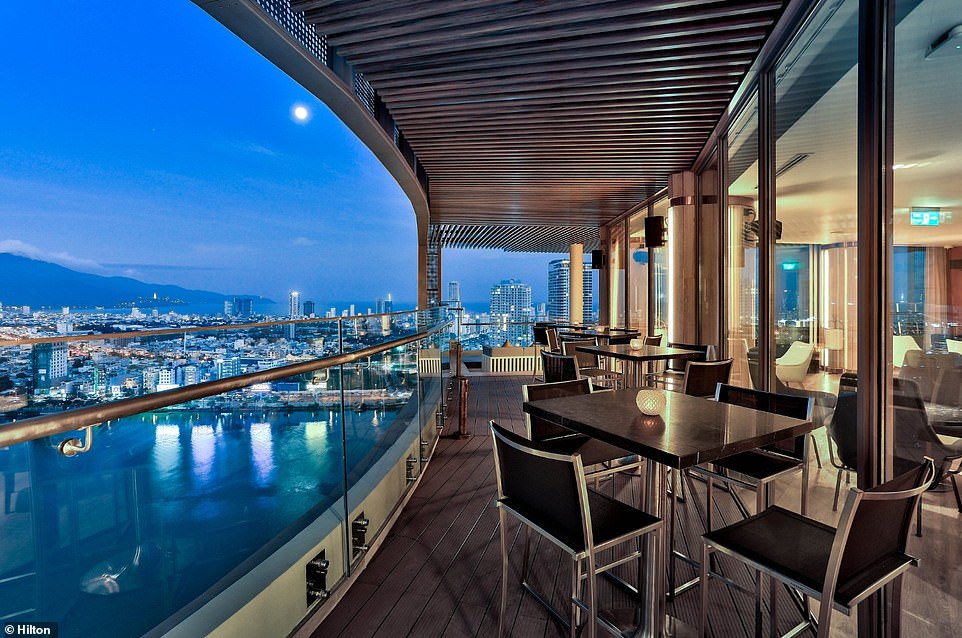 One of the prime hotels for viewing the show is the Hilton Da Nang, which sits on the Han River Bridge with sweeping views of the water 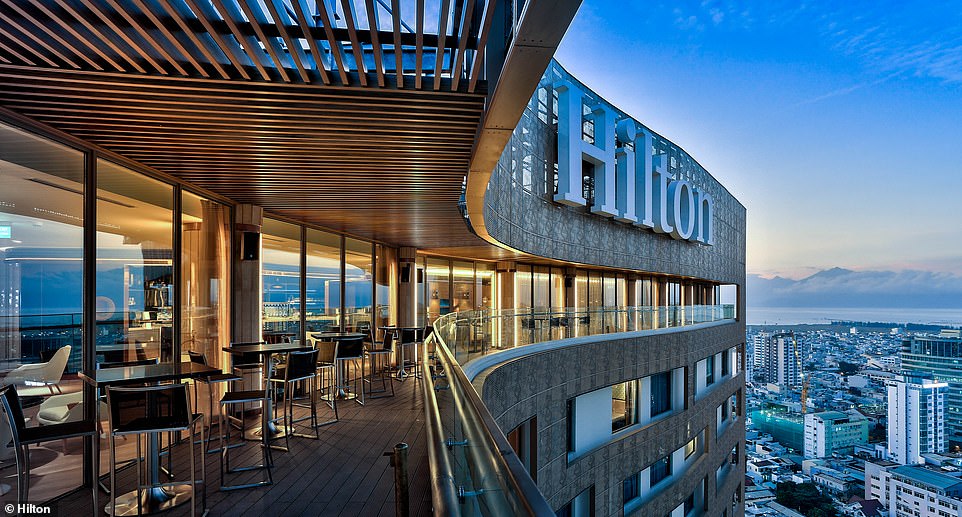 Guests can watch the fireworks while enjoying dinner at The Sail, a restaurant on the 28th floor with includes outdoor space 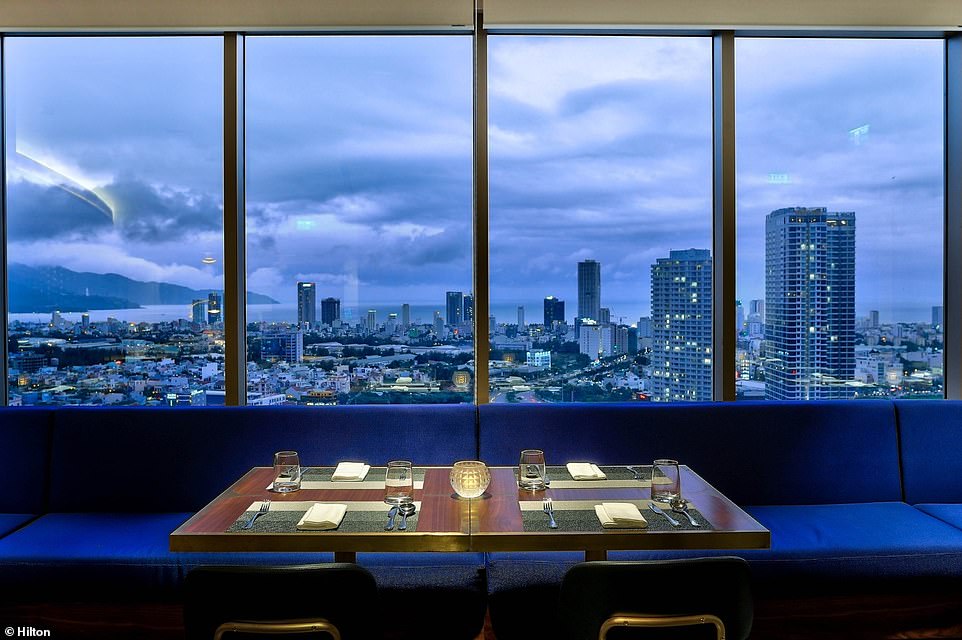 The restaurant has floor-to-ceiling windows, offering a great — and air-conditioned — view of the fireworks show 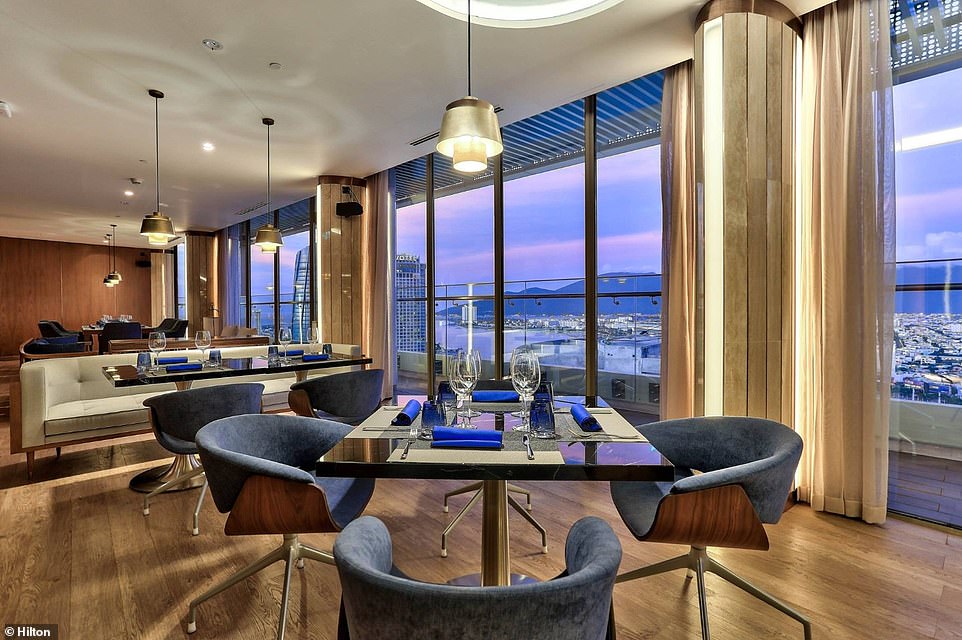 Since it only opened its doors in December, this was the first time it was able to host fireworks fans, who could score incredible seats at the hotel’s restaurant, The Sail.

Situated on the 28th floor, the high-end grill and cocktail bar has floor-to-ceiling windows offering a sparkling view of the river, as well as outdoor seating for those who insist that fireworks should have some literal bang for their buck.

Throughout June and the first weekend of July, diners at The Sail were also offered a special set menu with drinks on fireworks nights, in addition to menu options like steak, seafood, and burgers, as well as an extensive cocktail bar.

The five-star hotel also serves up food at Cafe Viet and Brasserie Nam, which hosts an extensive breakfast buffet.

Fireworks-viewing aside, the Hilton also has a 24-hour fitness center, an elevated outdoor pool with a relaxation area, an executive lounge on the 27th floor, meeting rooms, and a ballroom. 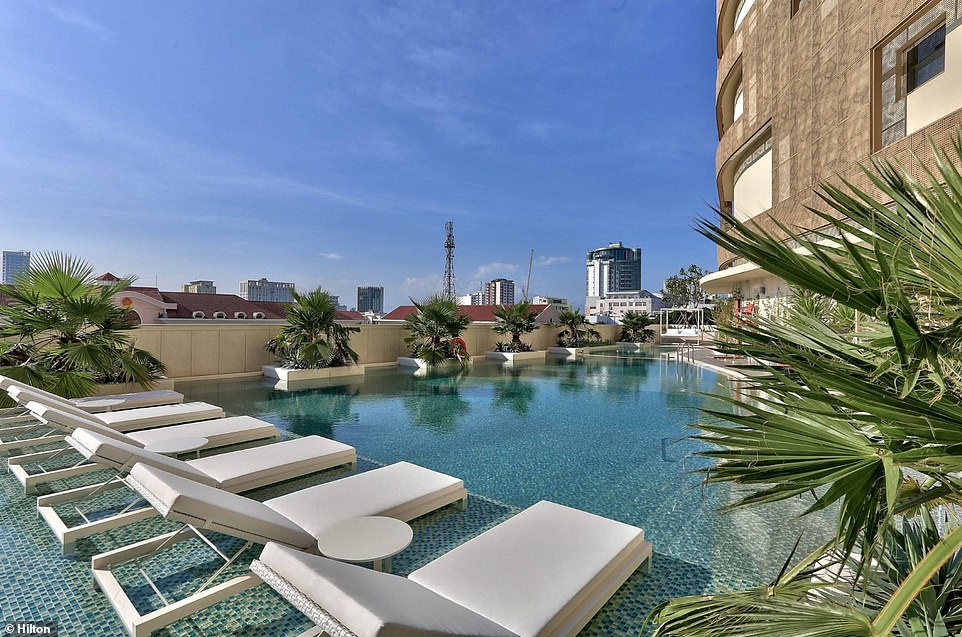 The five-star hotel, the brand’s third in the country, has an elevated outdoor pool with a relaxation area 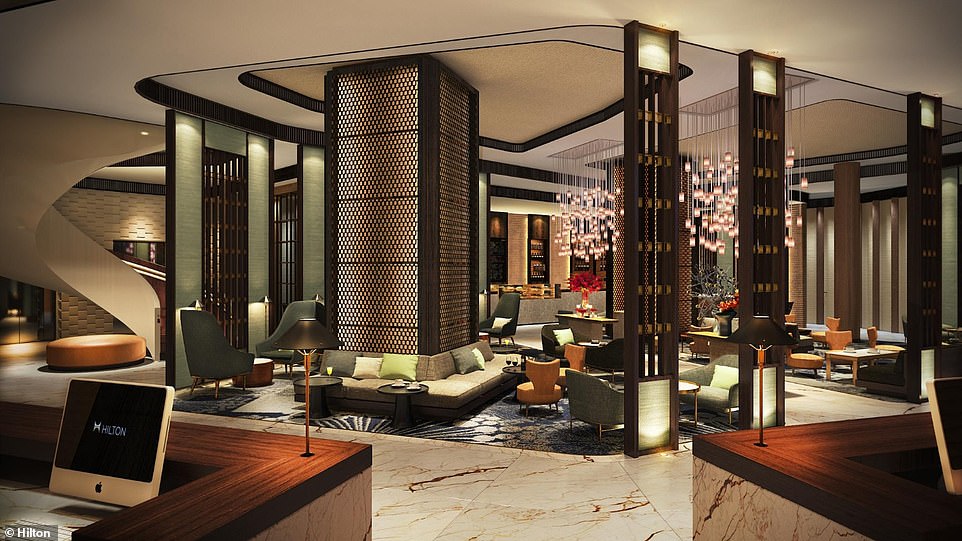 It also has a 24-hour fitness center, an executive lounge with views on the 27th floor, meeting rooms, and a ballroom 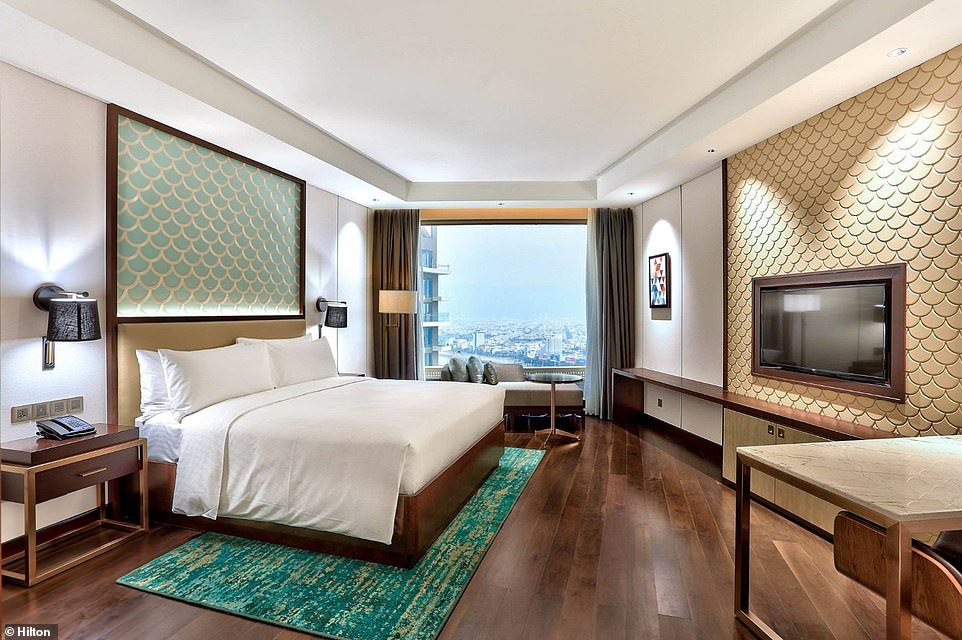 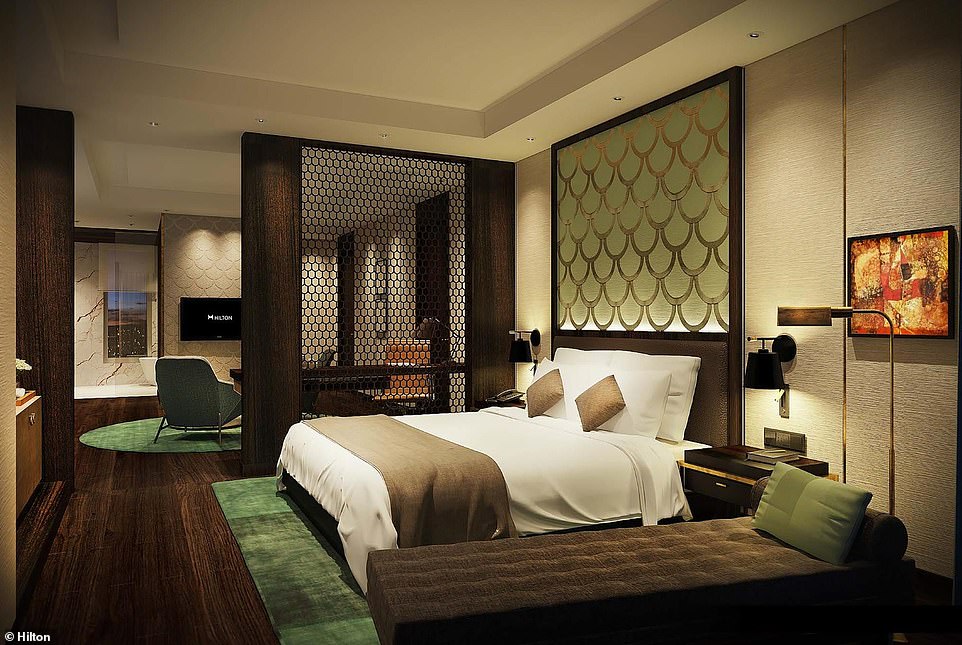 Its 220 guest rooms are all river-facing — meaning great views all around — and feature soaking tubs, waterfall showers, and Vietnamese-inspired décor like dragon scale art.

The hotel is also a great central spot for accessing the region’s tourist hotspots, including Da Nang Beach, the Dragon Bridge (which breathes fire on weekends), the nearby Marble Mountains, and the Son Tra Peninsula.

It a short ride from My Son Sanctuary, Hue, Hoi An, and Ba Na Hills — a theme park known for the Golden Bridge, which is held up by two stones hands. 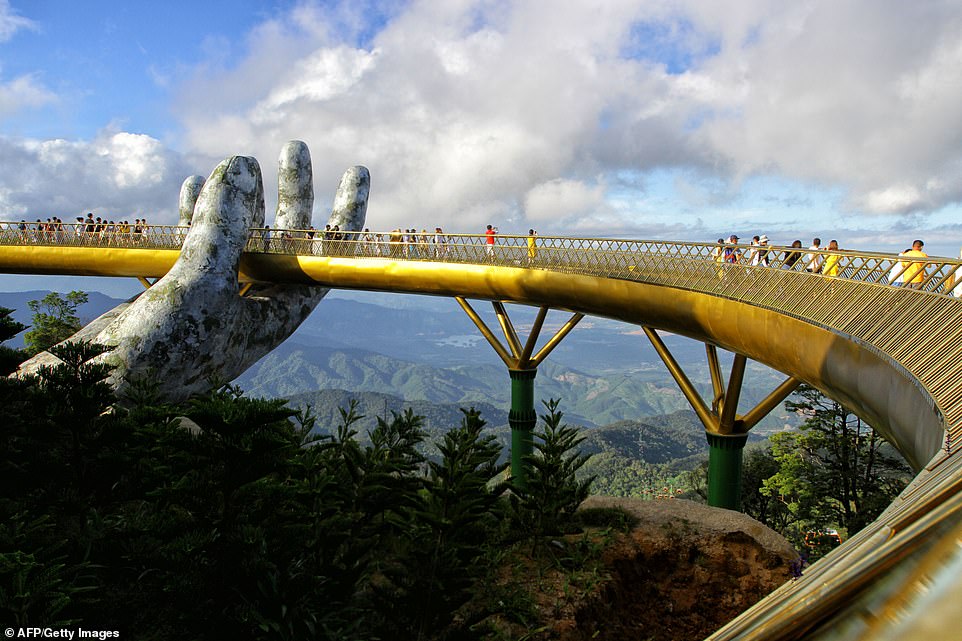 The hotel is also a great central spot for accessing the region’s tourist hotspots, including the famous Golden Bridge at Ba Na Hills amusement park 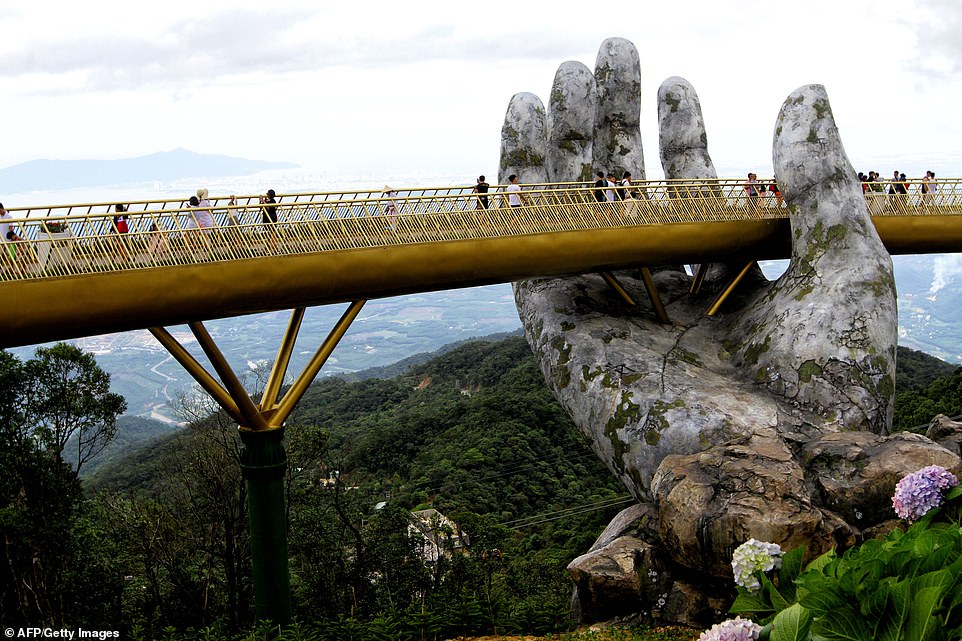 The bridge, which looks like it is being held up by hands, has become an Instagram must-visit for travelers since it opened a couple years ago 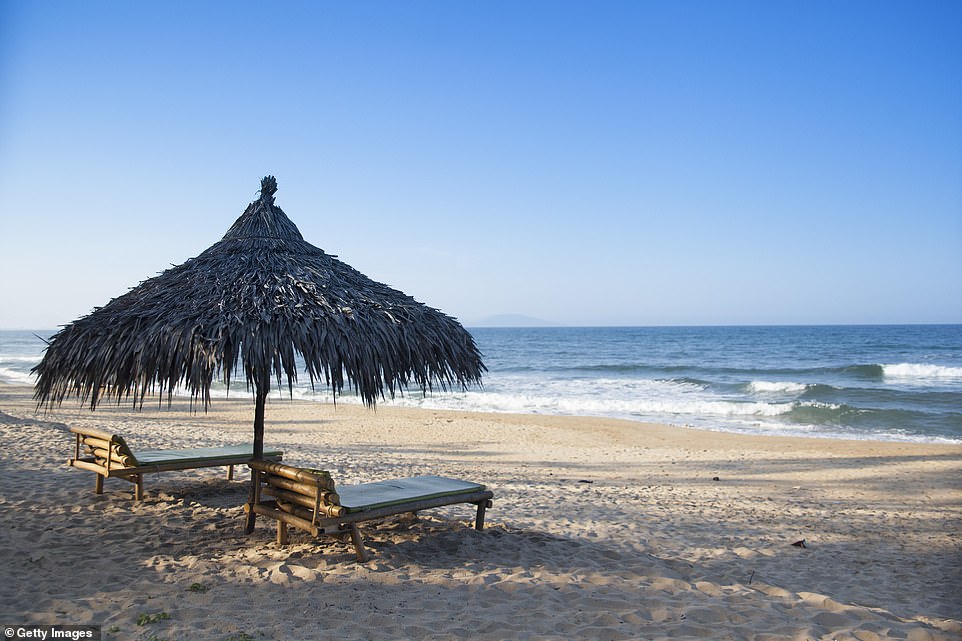 The city also boasts Da Nang Beach, which gets quite hot but isn’t too crowded for swimming and sunbathing during the day 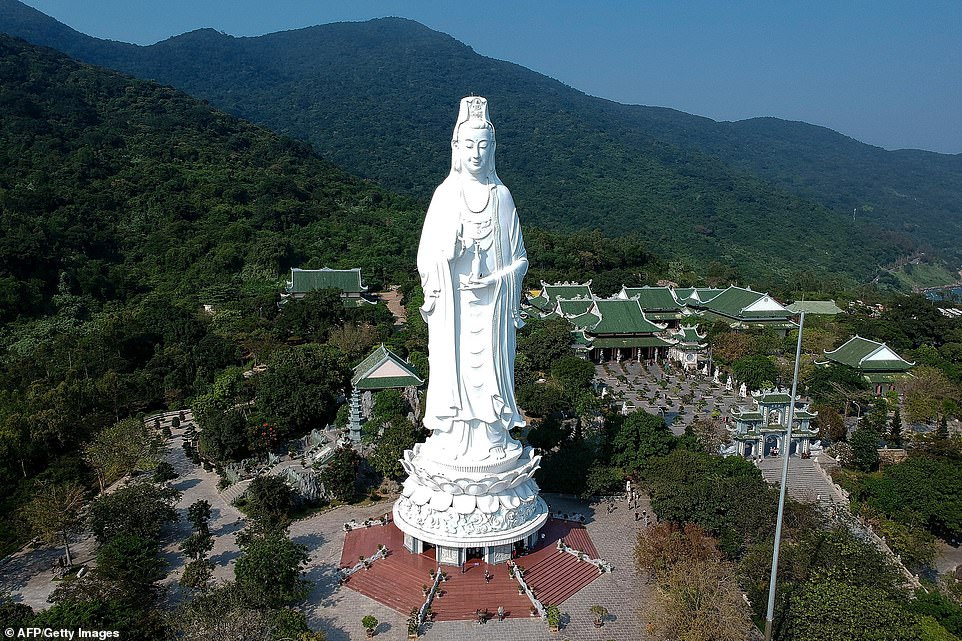 Nearby is Son Tra Peninsula, where visitors can see the Lady Buddha (pictured), the tallest Buddha statue in Vietnam 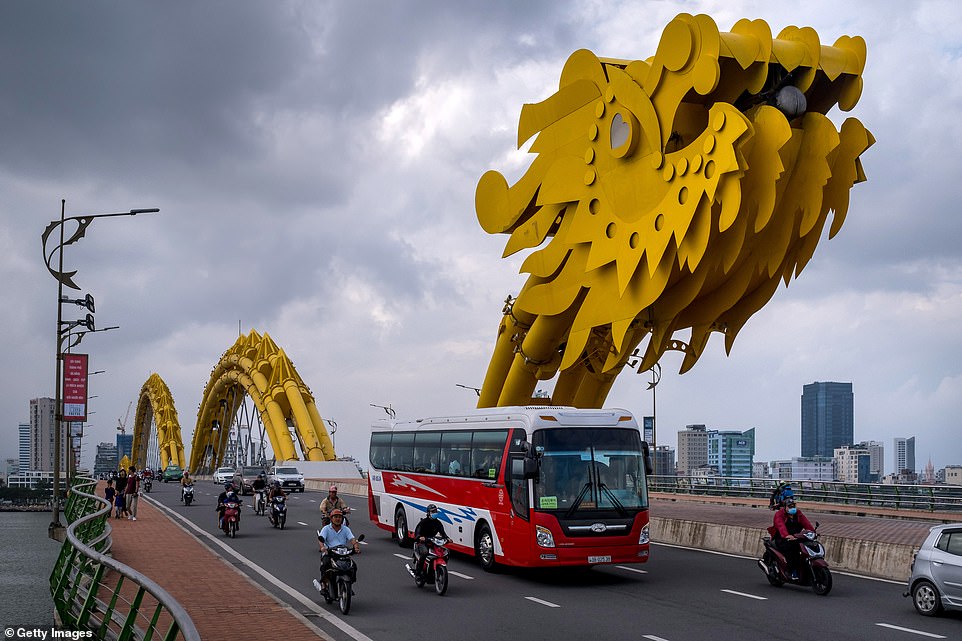