The fascinating life of mafia wife Anna Genovese is the subject of an upcoming HBO series that will explore her role in Manhattan’s drag club scene, her illicit lesbian romances, and her bold testimony against her notorious crime boss husband Vito Genovese.

Anna became the Italian-American mobster’s second wife just a few weeks after her first husband was mysteriously murdered in 1932. The businesswoman ran drag clubs and gay bars in Manhattan, reportedly having a number of lesbian affairs.

Two decades after she married into the mob, she reached a new level of infamy when she left Vito in 1950, ultimately breaking the rules of the Sicilian mafia, a.k.a. Cosa Nostra, by revealing his illegal criminal dealings in the divorce proceedings.

For years, her story was overshadowed by the criminal exploits of her ruthless husband, who was also her fourth cousin and the head of the Genovese crime family. Little was known about her until the release of Jessica Bendinger and Michael Seligman’s 12-episode podcast Mob Queens in 2019.

Wild: The life of Anna Genovese (pictured in 1957)  is the subject of Lena Dunham’s upcoming HBO series Mob Queens, which is being adapted from the 2019 podcast of the same name 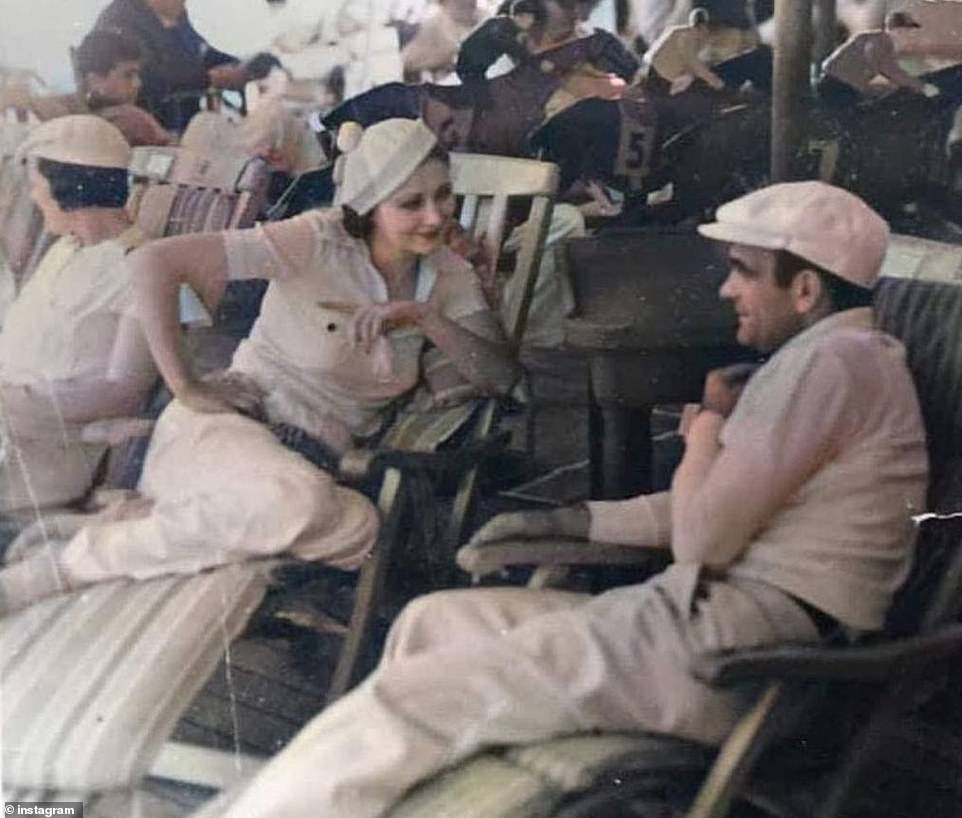 Crime family: Anna was the second wife of Italian-American mob boss Vito Genovese (pictured), who was also her fourth cousin

The writers spent four years researching Anna’s life after Seligman discovered a cache of letters written by drag queens while cleaning out the storage unit of an older friend who had passed away.

‘Anna just blows us away the more we learn,’ Bendinger told the Los Angeles Times. ‘As complicated as she is, she’s a part of queer history.’

Anna, whose maiden name was Petillo, grew up in New York City as the eldest child of Italian-Catholic immigrants. Bendinger and Seligman explained in the first episode of their podcast that the earliest mention of Anna that they could find was in a 1910 census record. She was listed as being five years and living on West Houston Street.

At 19, she married her first husband, Gerard Vernotico, in the spring of 1924. Anna’s great-niece told the podcast hosts that the future mob queen had ‘married for love,’ but the union was ‘not looked upon kindly’ by her family because he was a ‘young man of no means.’

The couple welcomed their daughter Marie in 1927, and they moved to a tenement apartment on Sixth Avenue. While census records listed Gerard as a carpenter, he was actually a baker, according to Anna’s great-niece.

Court records from the time show that Anna worked nights at a club in Greenwich Village. Vito was running rackets in the neighborhood, but it’s unclear if their paths ever crossed.

The mob boss was married to his first wife, Donata Ragone, and they lived in Queens with their daughter Nancy. The podcaster’s referenced the out-of-print book ‘King of Crime’ by Dom Frasca in which it was reported that Vito was violent toward his first wife.

According to the book, he once hit her with the back of his hand because she had accidentally spilled wine on one of his associate’s sleeves. Donata died of tuberculosis in September 1931, though there have been rumors that Vito played a part in her death. 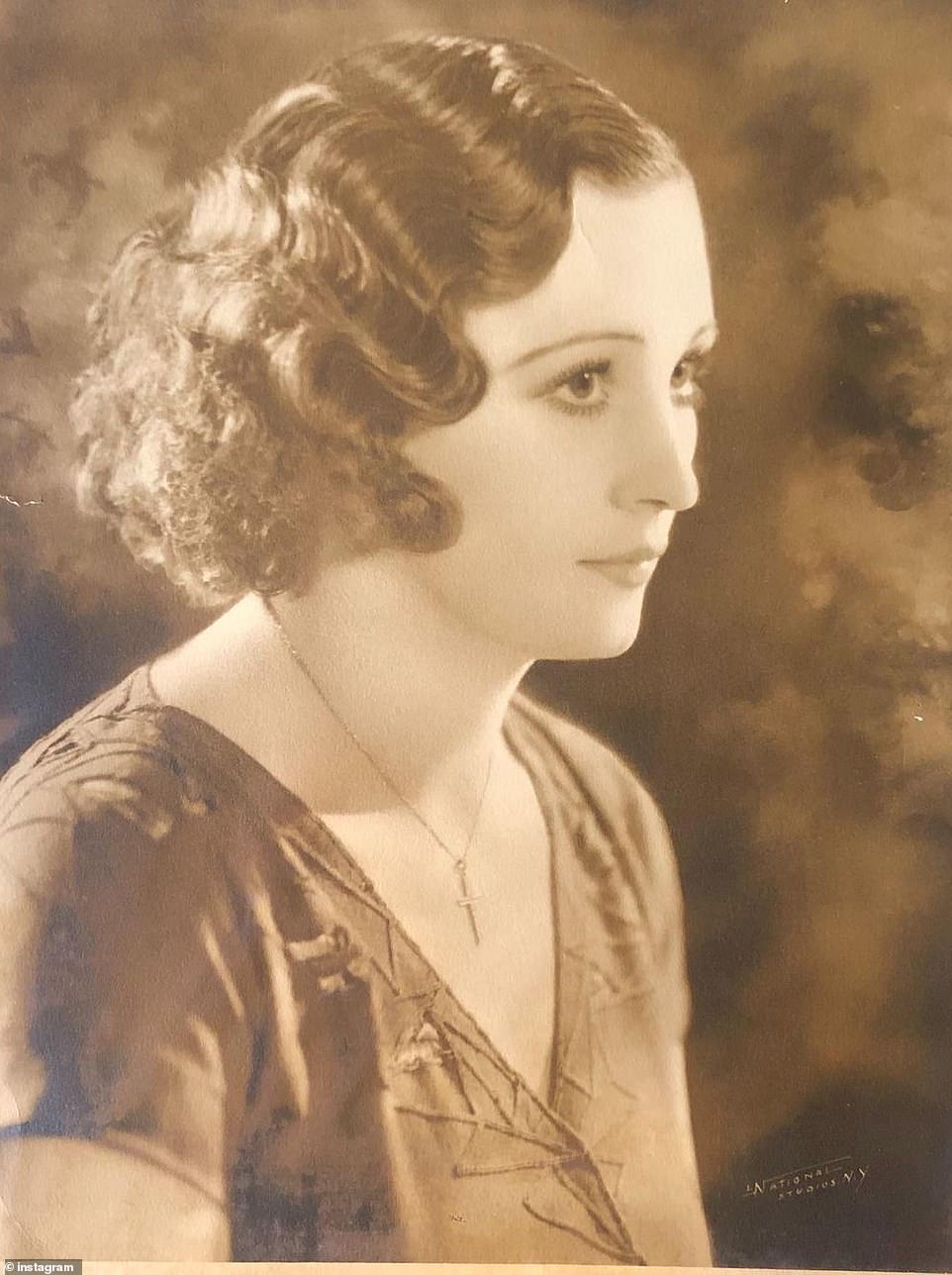 Rumors: Anna married Vito in 1932, just two weeks after her first husband Gerard Vernotico was murdered. It has been claimed that Vito ordered the hit because he wanted to marry Anna 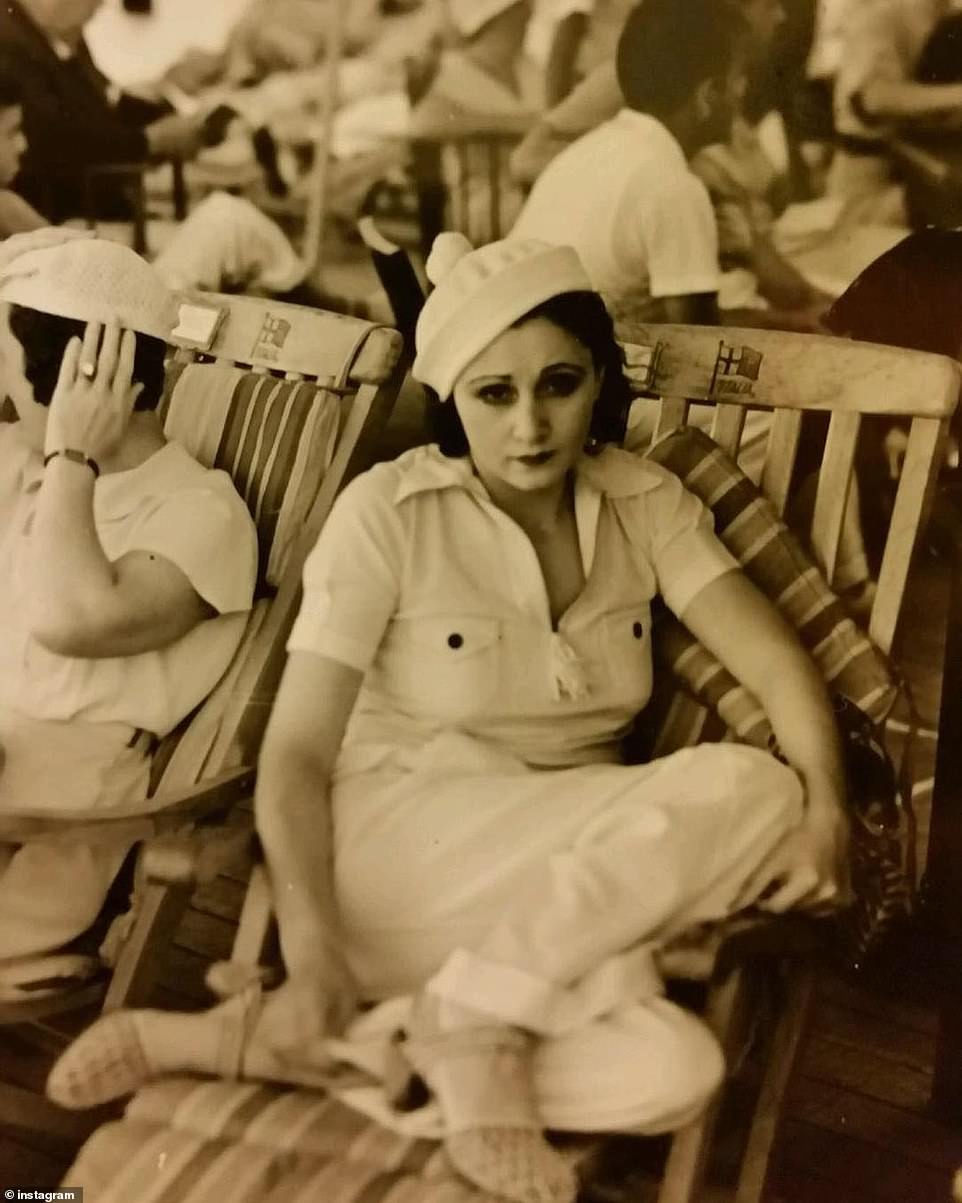 History: Anna started running drag clubs and gay bars in Manhattan after Vito fled to Italy in 1937. She would siphon the profits to the mob and Vito while he was in exile

Months later, Anna’s husband Gerard was found strangled to death on the roof of a building in March 1932. No one was ever convicted of the crime, but informant Joseph Valachi claimed Vito put a hit on Gerard because he wanted to marry Anna.

Two weeks after her first husband was killed, a pregnant Anna said ‘I do’ to Vito, but according to her great-niece, she didn’t have a choice in the matter.

‘She hated Vito,’ she claimed on the second episode of Mob Queens.

In 1934, just two years into their marriage, Vito allegedly had fellow mobster Ferdinand ‘The Shadow’ Boccia killed. A year later, Vito purchased ‘Deep Cut,’ a 1928 mansion in Middletown Township, New Jersey, and moved his family out of New York.

Around the same time, there was a crackdown on organized crime led by New York Special Prosecutor Thomas E. Dewey. When Boccia’s body was pulled from the Hudson River in 1937, Vito stood accused of the mobster’s murder and other crimes, including racketeering. He fled to Italy, leaving his wife to run his crime business.

Prohibition had ended in 1933, but it paved the way for ‘Gay Prohibition,’ which prohibited members of the gay community from drinking at bars and clubs.

Bendinger and Seligman explained in episode five of their podcast that bars could lose their liquor licenses for serving gay patrons at the time because it was considered ‘disorderly.’ 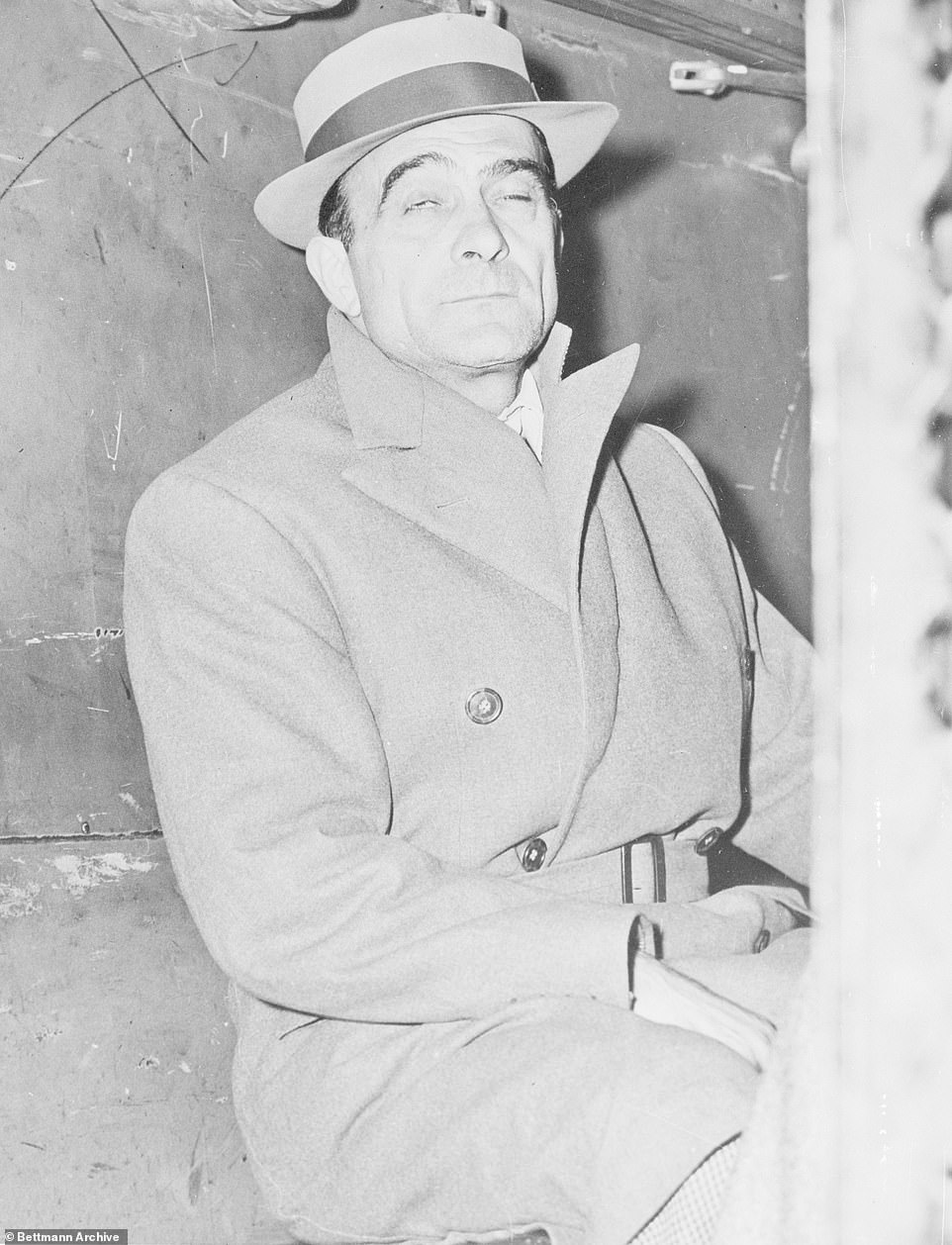 Coincidence? In 1945, Vito was extradited back to the U.S. and went on trial for murder, but the charges were dropped after two key witnesses were found dead 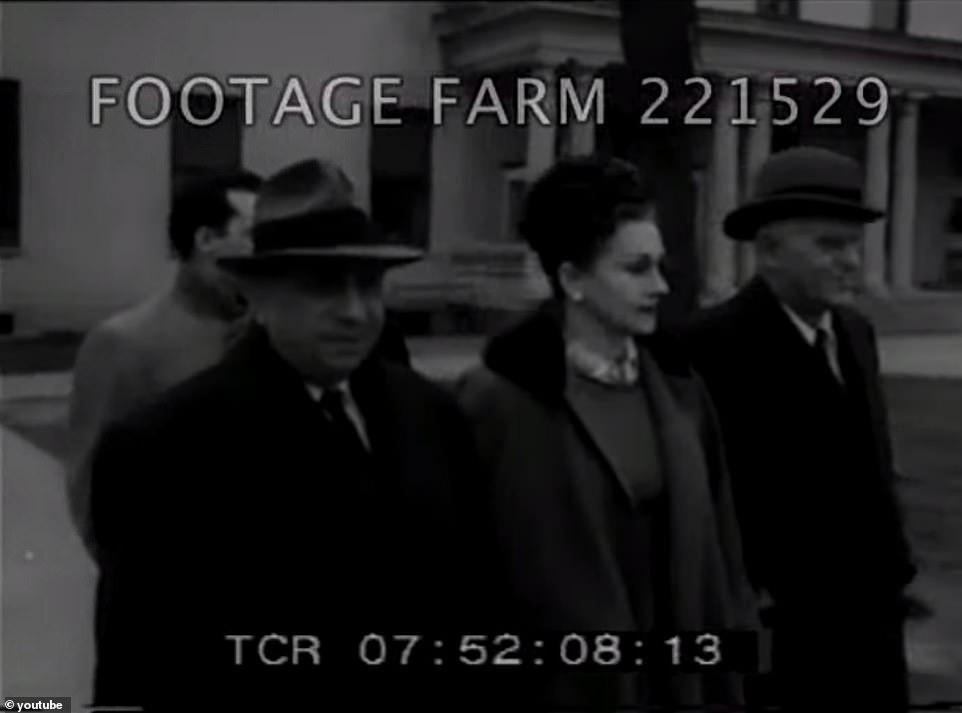 Bold: Anna reached a new level of infamy when she left Vito in 1950, ultimately breaking the rules of the Sicilian mafia by revealing his illegal criminal dealings in the divorce proceedings 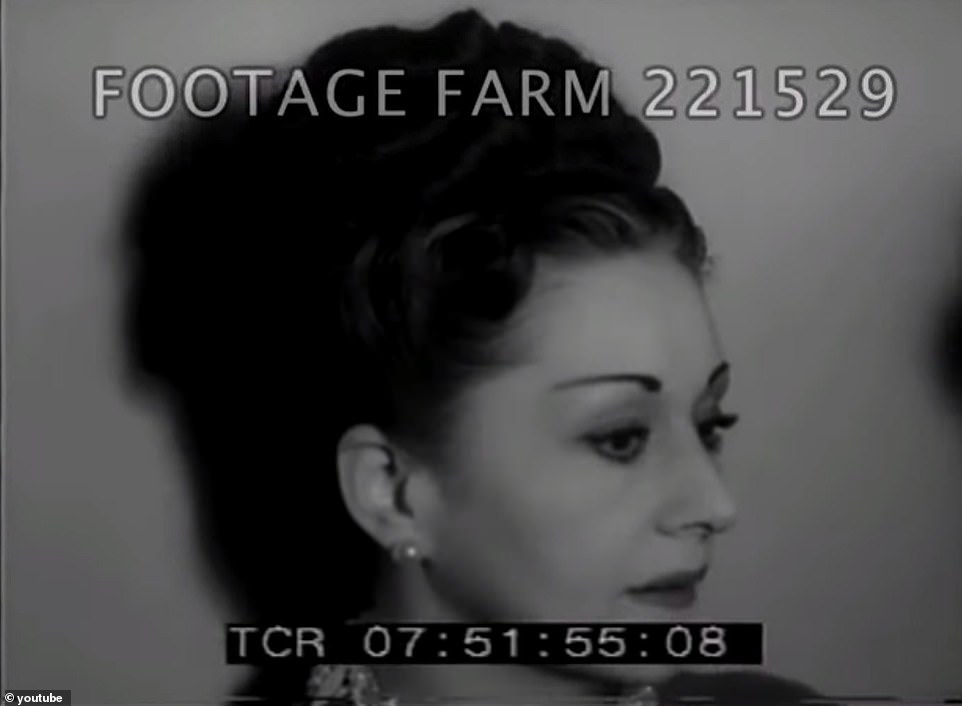 Revenge: Anna, who accused her husband of domestic abuse, told the court: ‘Vito has his sticky fingers almost all the rackets’

She used her mob ties to block police efforts to persecute gay patrons and would siphon the profits to the mob and Vito while he was exiled in Italy.

In 1939, she opened her first club, Club Caravan, which featured singers and performers, including drag king Malvina Schwartz, who was known as Buddy ‘Bubbles’ Kent. She later co-owned the 181 Club, a cabaret venue that was known as ‘the homosexual Copacabana.’

There were rumors that Anna was bisexual or a lesbian, which her granddaughter confirmed on the Mob Queen’s podcast. She said Anna was romantically involved with Gwen Saunders, a cashier at one of her clubs. She also opened up about her grandmother’s relationship with her girlfriend, Jackie, a drag king known as Duke.

In 1945, Vito was extradited back to the U.S. He went on trial for Boccia’s murder, but the charges were dropped the next year after two key witnesses were found dead. The kingpin moved his family from New York to New Jersey, and Anna’s time in the club business came to a halt.

Anna walked out on Vito in 1950, and it was arranged in court that he would give her $200 per week in separate maintenance, which was essentially alimony without a divorce. The maintenance was later dismissed after Vito claimed he couldn’t afford the payments.

She dropped her divorce suit in 1951, and that same year, her beloved 181 Club was raided by undercover state liquor authority agents and lost its liquor license. At age 46, she was living with her mother in Little Italy without any money or business. 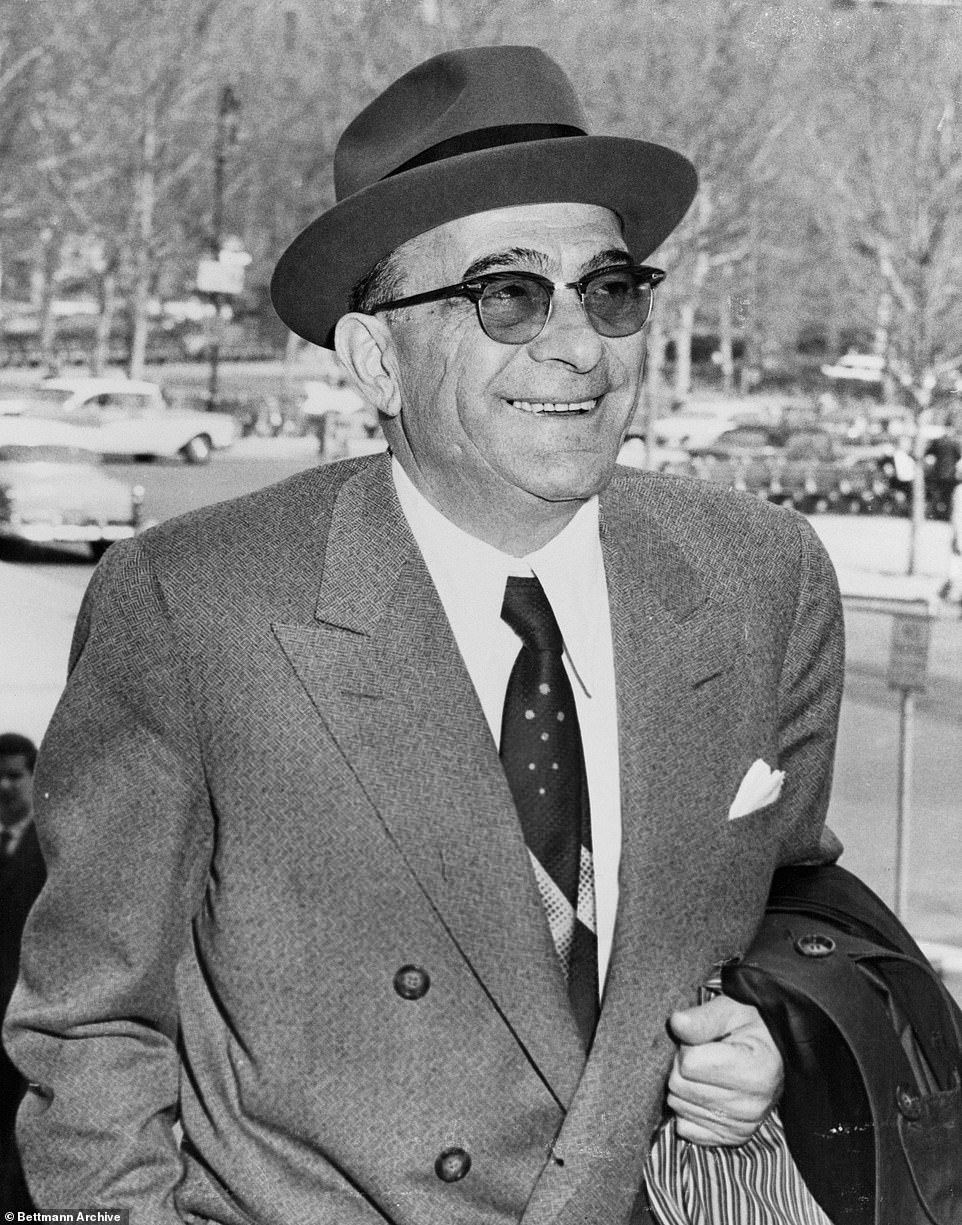 Claim to fame: In 1957, Vito took control of the Luciano crime family from Costello and renamed it the Genovese crime family 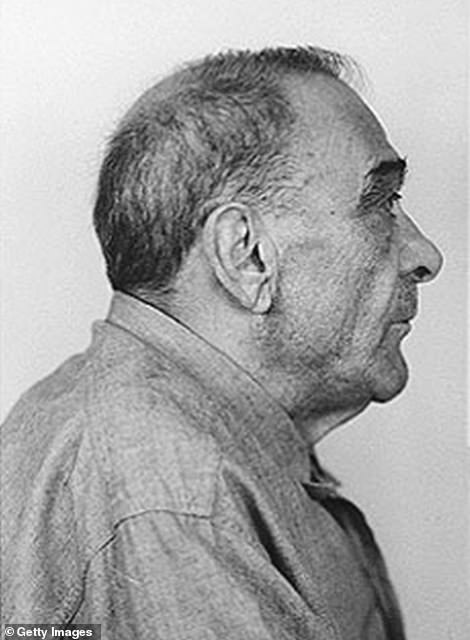 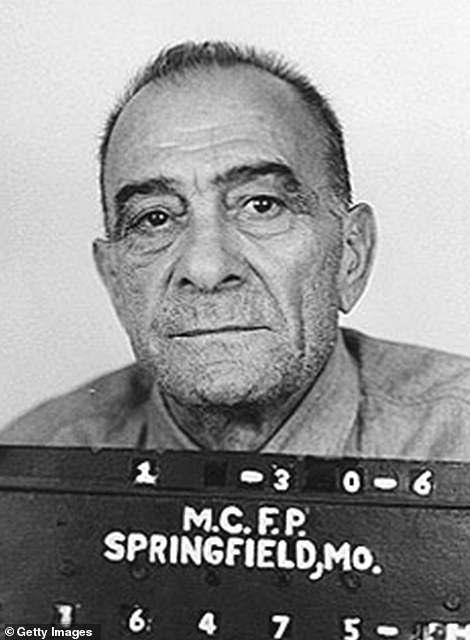 Busted: After just a year in charge, he went to prison for possessing and distributing narcotics 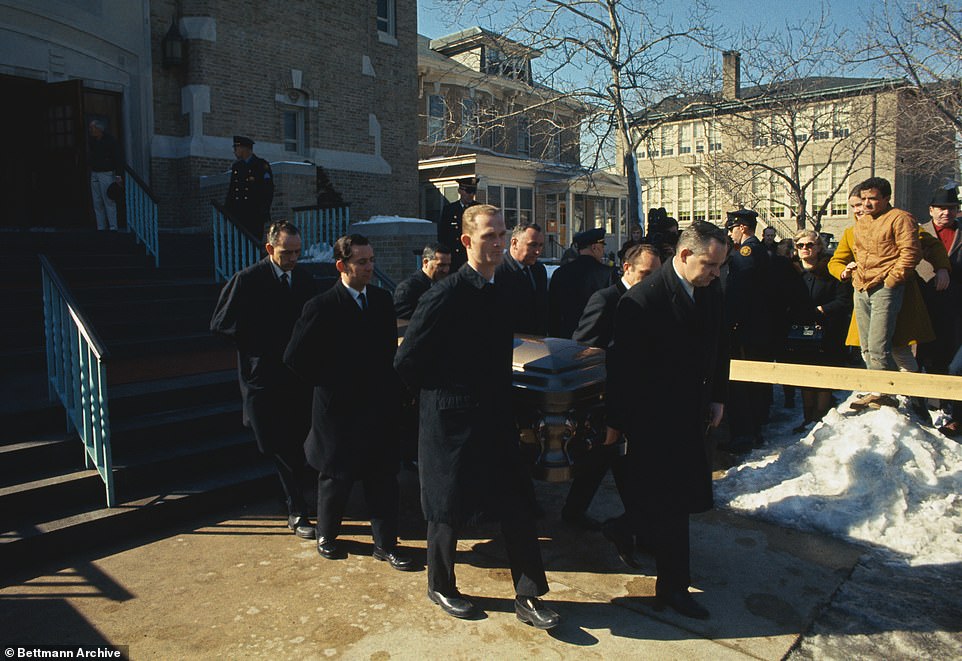 Death: Vito died from a heart attack at the United States Medical Center for Federal Prisoners in Springfield, Missouri, in 1969. His funeral was held  in New Jersey (pictured)

In 1953, Anna did what no mob wife had ever done before: She testified against her husband in open court. She brought on the divorce suit on the grounds of ‘extreme cruelty’ and asked the judge for $350 a week in alimony (about $3,600 in today’s money).

‘Vito has his sticky fingers almost all the rackets,’ she she testified at the Freehold County Courthouse in New Jersey. 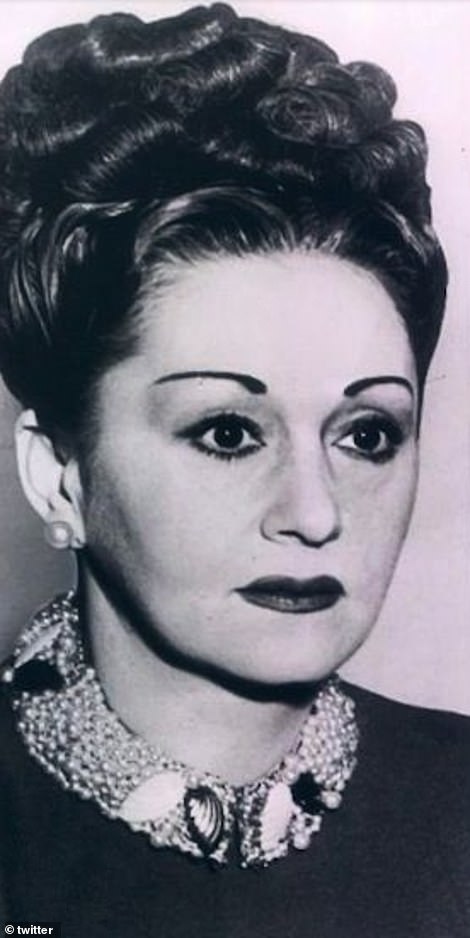 End of her life: In 1982, Anna suffered a stroke and died in the hospital. She was surrounded by her daughter Marie, her granddaughter, and her lover Jackie

Anna, wearing a mink coat, said the crime family had been involved in a myriad of criminal activities, including narcotics trafficking, casinos, labor rackets, and dog- and horse racing.

She claimed that she managed gambling ventures that generated $30,000 per week and stated she was the only one with the combination to the family safe in New Jersey.

Anna namedropped other mob leaders, including Vito’s rival Frank Costello, in her testimony. She also alleged that Vito had been physically abusive toward her in his marriage, saying she had been afraid to talk about his crime career in the past because he had threatened her.

Vito filed a counter-suit for divorce on the grounds of desertion. His lawyer attempted to discredit Anna by characterizing her as an untrustworthy and hot-tempered woman who was intimate with other women. More than 20 witnesses took the stand to say Vito was nothing but a loving husband.

Dorothy Kilgallen, a syndicated gossip columnist, reported on the case, writing: ‘If I were Mrs. Vito Genovese, I would be awful careful crossing streets.’

It was later revealed that the journalist was friendly with Costello, who had gifted her a diamond cross. The podcast speculated that Kilgallen may have issued a public warning to Anna via her column on the behalf of Costello.

When it was time for Anna to testify in front of a grand jury, it was reported she was too sick to leave her home.

‘It’s a good bet that Mrs. Anna Genovese will continue to be too sick to talk to any grand jury investigating crime along the waterfront,’ Kilgallen wrote, according to the podcast. ‘All she wants is a divorce and a healthy settlement from Vito.’

Anna went on to manage Club 82, the mafia-owned drag performance venue in the East Village, as she awaited the judge’s ruling in her divorce suit. 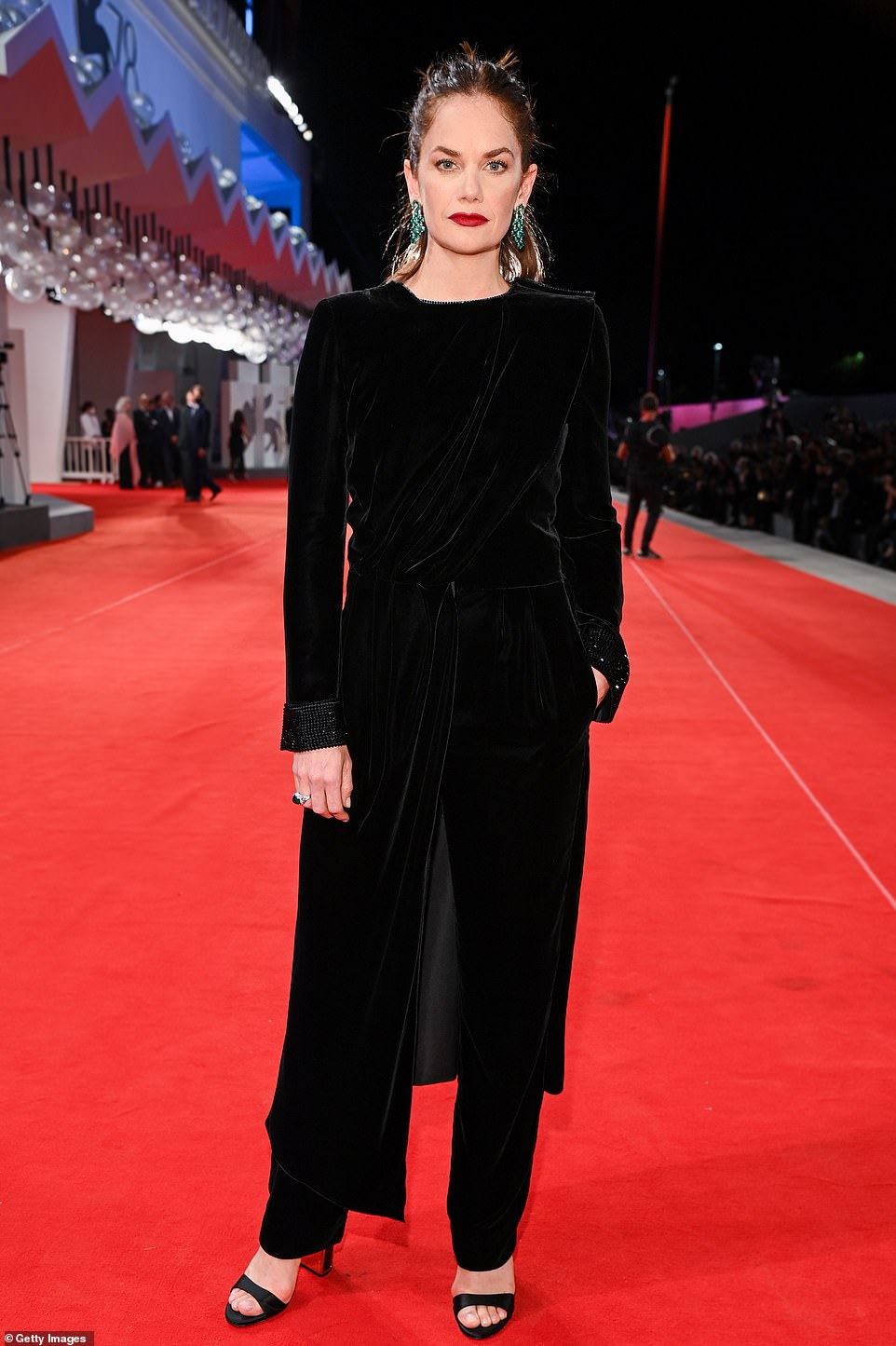 Meet Anna: British actress Ruth Wilson is set to portray the mafia wife in a new HBO series, Mob Queens, on which she will also serve as an executive producer

In 1953, Vito allegedly had mobster Steven Franse murdered because of Anna. Franse was in charge of supervising Anna while Vita was in exile in Italy, and the mobster was enraged by her alleged affairs and the lawsuit against him. 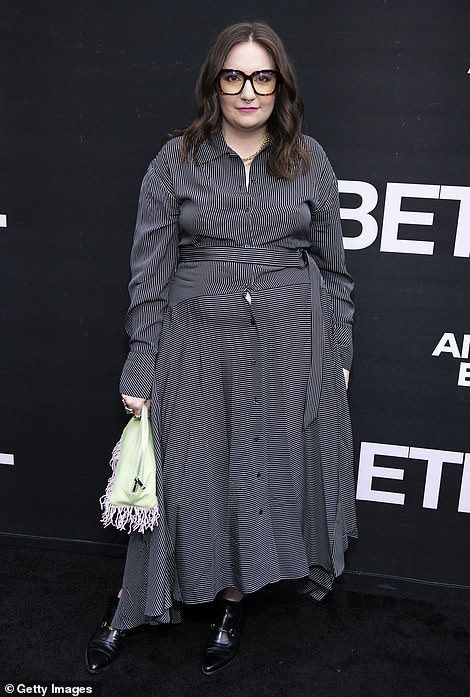 Taking it to the small screen: Lena Dunham is adapting Jessica Bendinger and Michael Seligman’s Mob Queens podcast into the television drama of the same name

Valachi claimed Vito ordered him to set up the murder of Franse, who was strangled in the Bronx, though charges were never brought against him.

A judge later threw out their divorce suit, and the couple remained married but estranged. Anna continued to work at Club 82 and somehow managed to survive ratting out her ex in court.

In 1957, Vito took control of the Luciano crime family from Costello and renamed it the Genovese crime family.

After just a year in charge, he went to prison for possessing and distributing narcotics.

He died from a heart attack at the United States Medical Center for Federal Prisoners in Springfield, Missouri, in 1969.

Anna left Club 82 in the late 1960s to help take care of her family, but she continued to work. She got a job at the swanky Warwick Hotel working in guest relations. According to her granddaughter, she befriended Cary Grant while she was there.

In 1982, thirteen years after Vito’s death, she suffered a stroke and died in the hospital. She was surrounded by her daughter Marie, her granddaughter, and her lover Jackie. She was buried next to Vito in the Genovese Family vault in St. John Cemetery, Queens, New York.

Dunham is adapting Bendinger and Seligman’s Mob Queens podcast into a television drama of the same name. She is writing and executive producing the HBO limited series with writer Dennis Lehane.

The Girls star is slated to direct the project starring actress Ruth Wilson, who is also serving as an executive producer.