Inside the New York of Yesteryear: Pictures give rare glimpse into the homes of 1970s Brooklyn

A series of fascinating photographs by a pioneering female photographer offer a glimpse into life in 1970s Brooklyn.

The late Dinanda Nooney has become synonymous with Brooklyn after taking more than 570 photos of around 200 families who lived there between January 1978 and April 1979.

The photographer, who moved to New York from Germany in the early 1970s, documented their private worlds from family dinners, to games, hobbies, jobs, birthdays, naps, post Christmas lunches, and taste in decor and fashion.

The candid, gelatin silver images capture a snapshot in time with parents and children in bedrooms, living rooms or kitchens.  Everyone a character in their own right.

Many of the photos are still-life captures of buildings or rooms filled with period furniture that are perfect time capsules of late 1970s decor, including shag pile rugs, rattan Peacock chairs, record players, fringed lamps and sofas covered in plastic.

One of the homes she entered was the Park Slope residence of Gerard Basquiat, Nora Fitzpatrick and daughters Lisane and Jeanine; a Haitian Puerto-Rican family.

Their 18-year-old son was not present that today- he had already left home and was on his way to future stardom as a painter – Jean-Michel Basquiat.

The photos are available to browse on the New York Public Library’s (NYPL) online catalogue after Nooney gifted them to the library in 1995.

The NYPL also created an interactive map showing where all the homes are located.

The home of Gerard Basquiat and his family, pictured at dinner at their home 553 Pacific St., Park Slope, Brooklyn. March 5, in 1978. Their son, Jean-Michel, then 18, was not present, having already moved out and started on his way to becoming a world-famous painter. Basquiat’s neo-expressionist paintings were a social commentary on his life as a Haitian, Puerto-Rican American, as well as attacks on power structures and racism. He died of a heroin overdose aged 27 in 1988. At a Sotheby’s auction in May 2017, a 1982 painting by Basquiat sold for $110.5 million, becoming one of the most expensive paintings ever purchased. 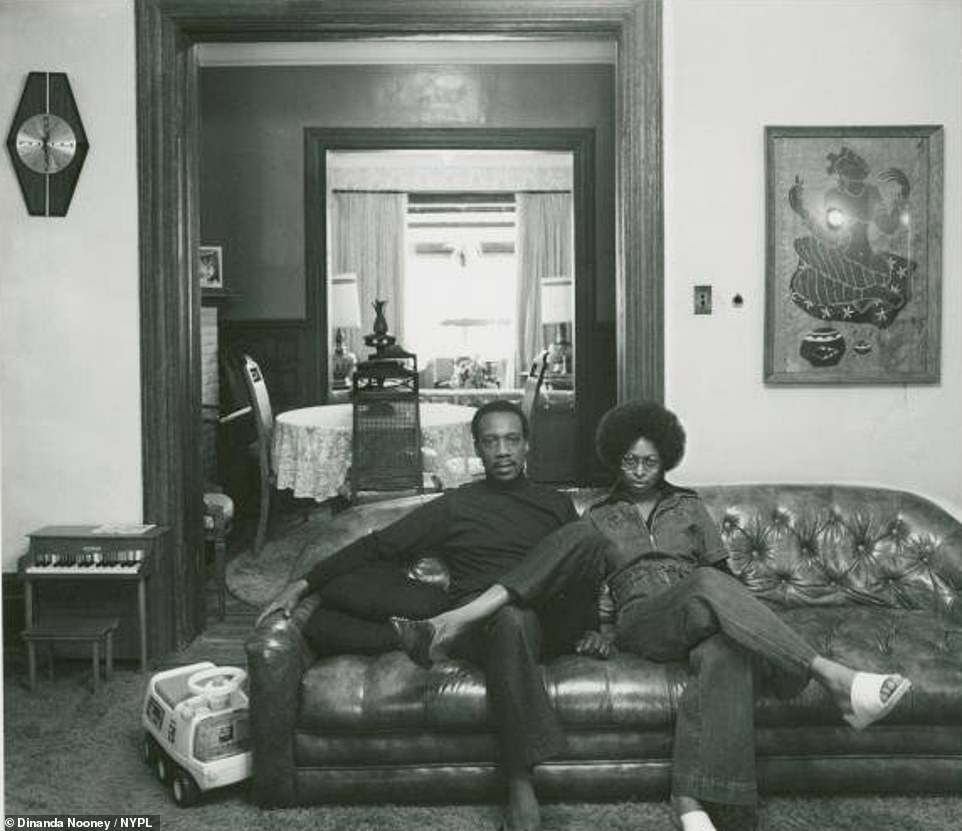 Jonathan & Dorothy Nelson, pictured on the leather Chesterfield at the home they shared with their children, at 897 Sterling Pl., Bedford-Stuyvesant, Brooklyn, on May 20, 1978. Nooney was known for keeping meticulous notes of her subjects’ names and addresses 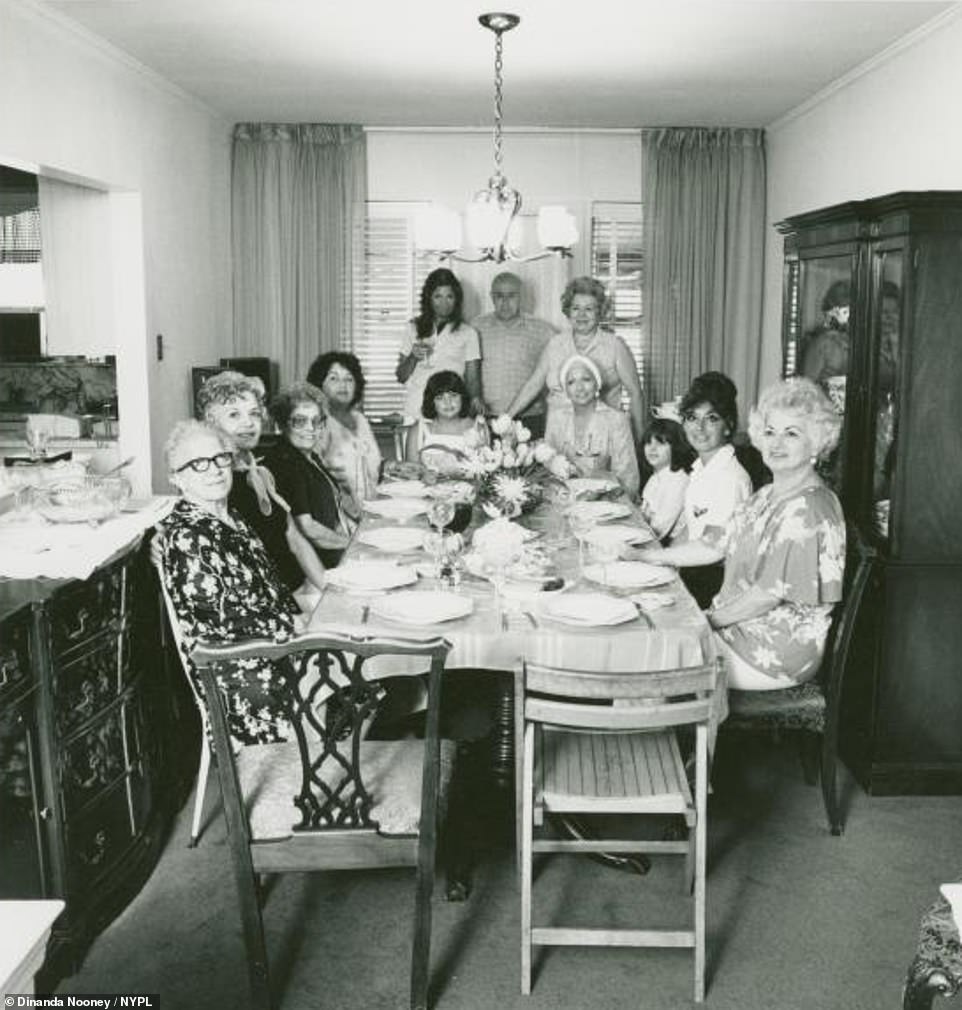 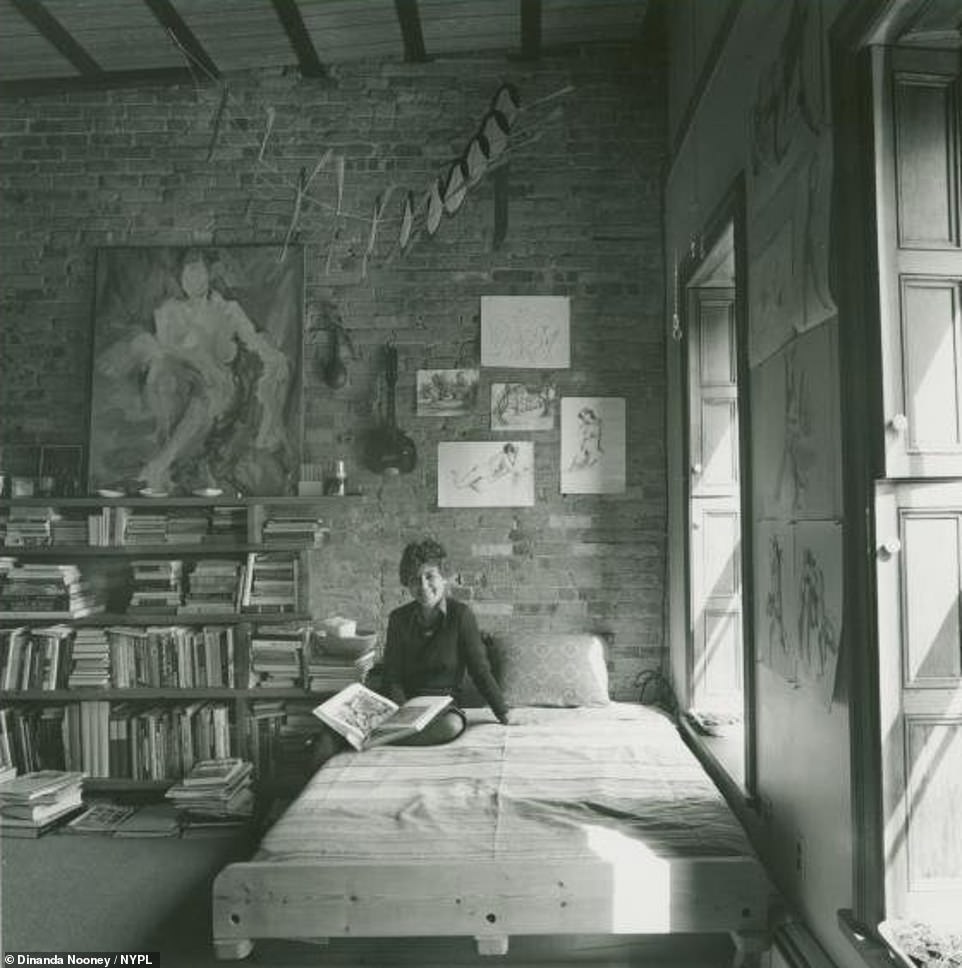 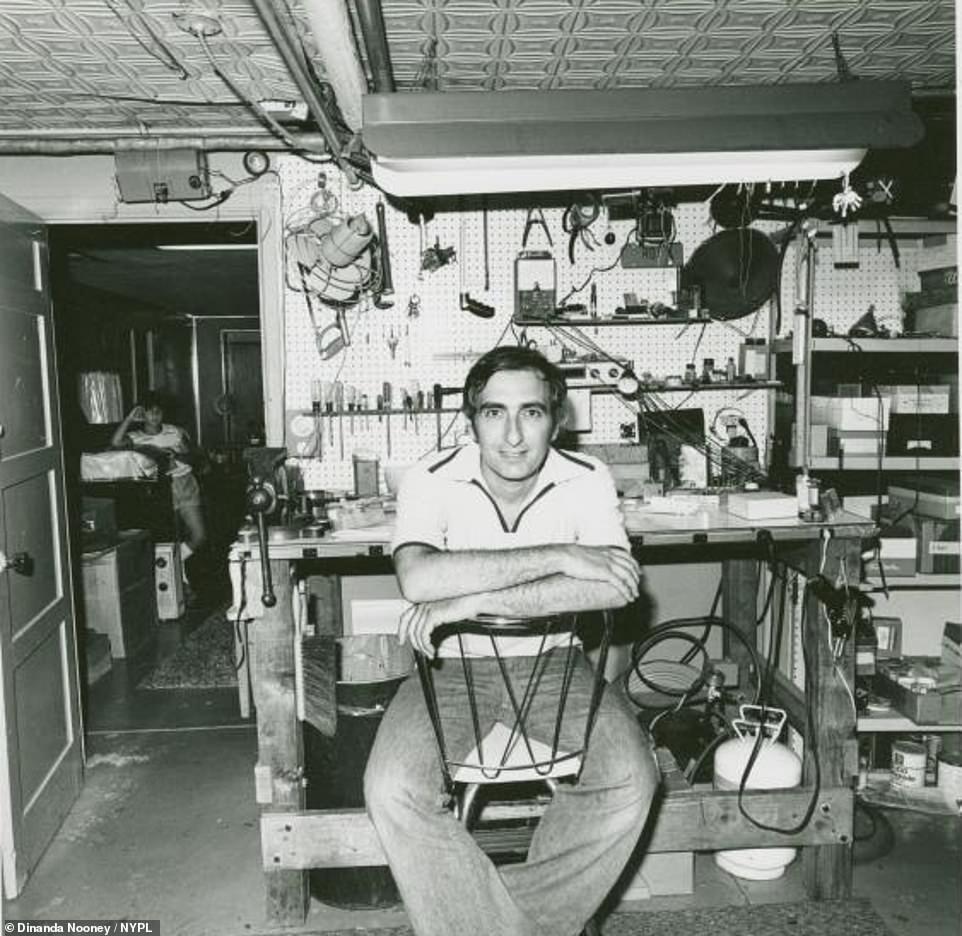 Roy Zirillo pictured in his workshop at 85 76th St., Bay Ridge, Brooklyn, on July 26, 1978, the home where he lived with his wife Martha and children, pictured in the background 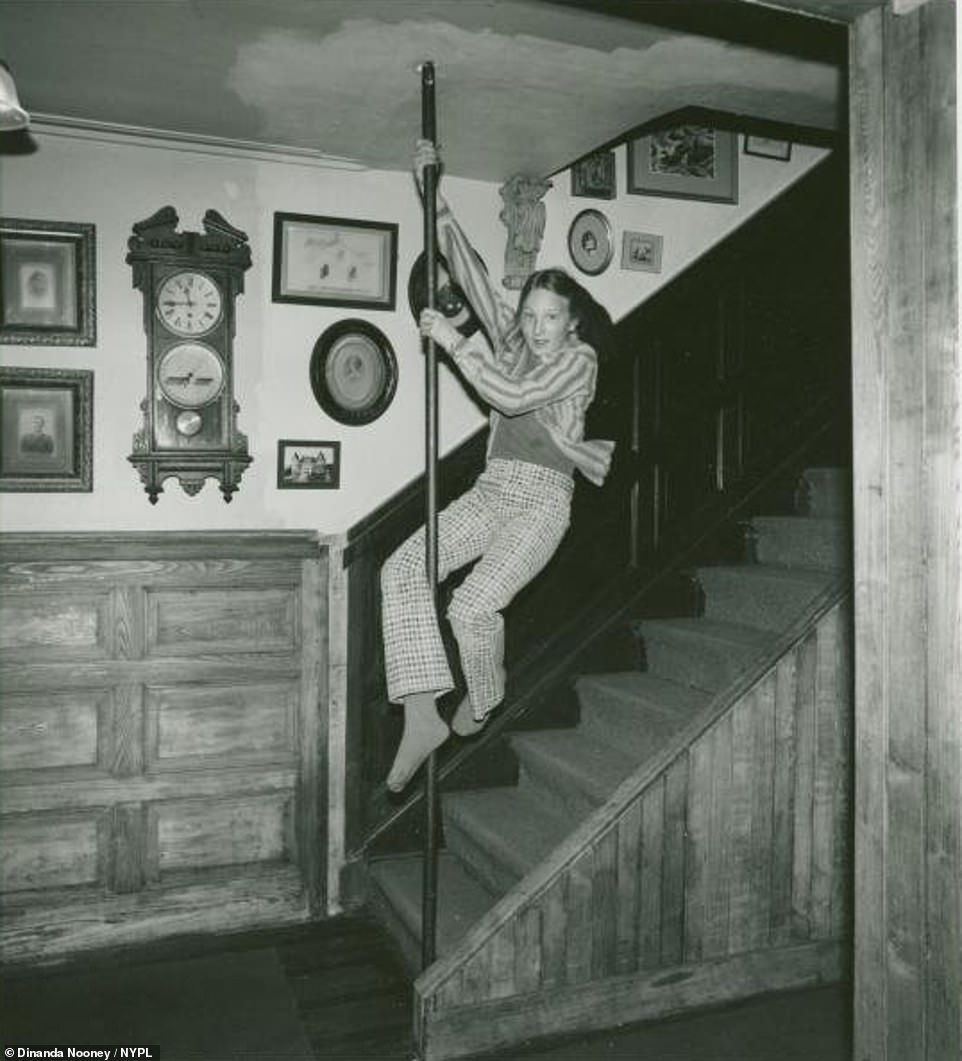 The daughter of Bill & Lucy Sikes, slides down the pole at the bottom of their staircase at 231 Washington Ave., Clinton Hill, Brooklyn, on May 7, 1978. Nooney wanted to capture people’s everyday lives

She was born in Germany in 1918 to a wealthy family in the caviar business before moving to the US following her divorce.

Nooney had never lived in Brooklyn herself, having moved to Manhattan.

In 1972 , she worked on anti-Vietnam war presidential candidate George McGovern’s unsuccessful campaign in 1972 against Richard Nixon, photographing his rallies in Brooklyn as well as helping organize in the city.

A few years later, some of her Greenpoint coworkers from that time became the first people to allow her to photograph them inside their homes.

The Brooklyn project, from January 1978 to April 1979, became a year of near daily work that criss-crossed her through the borough – into wealthy neighborhoods and homes, as well as less well off areas. 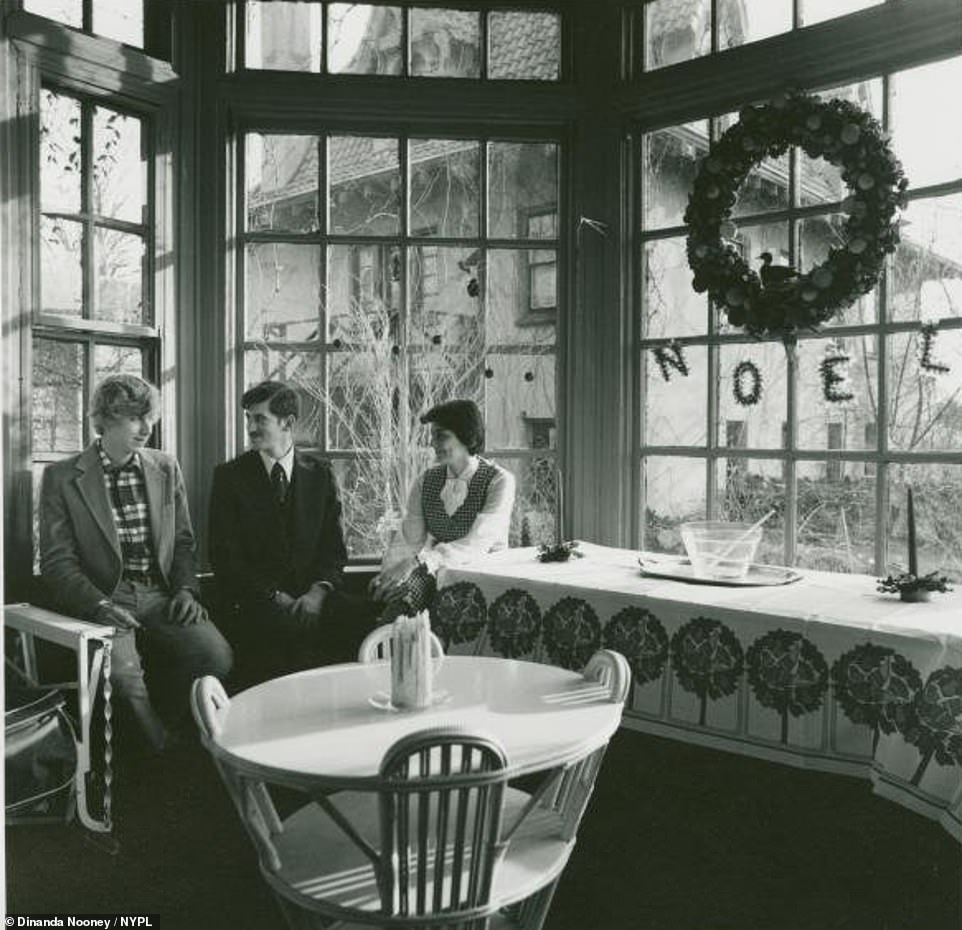 The children of John & Elinore Koechley, a well-off family living at 122 76th St., Bay Ridge, Brooklyn, where photographed on December 26, 1978, just after Christmas 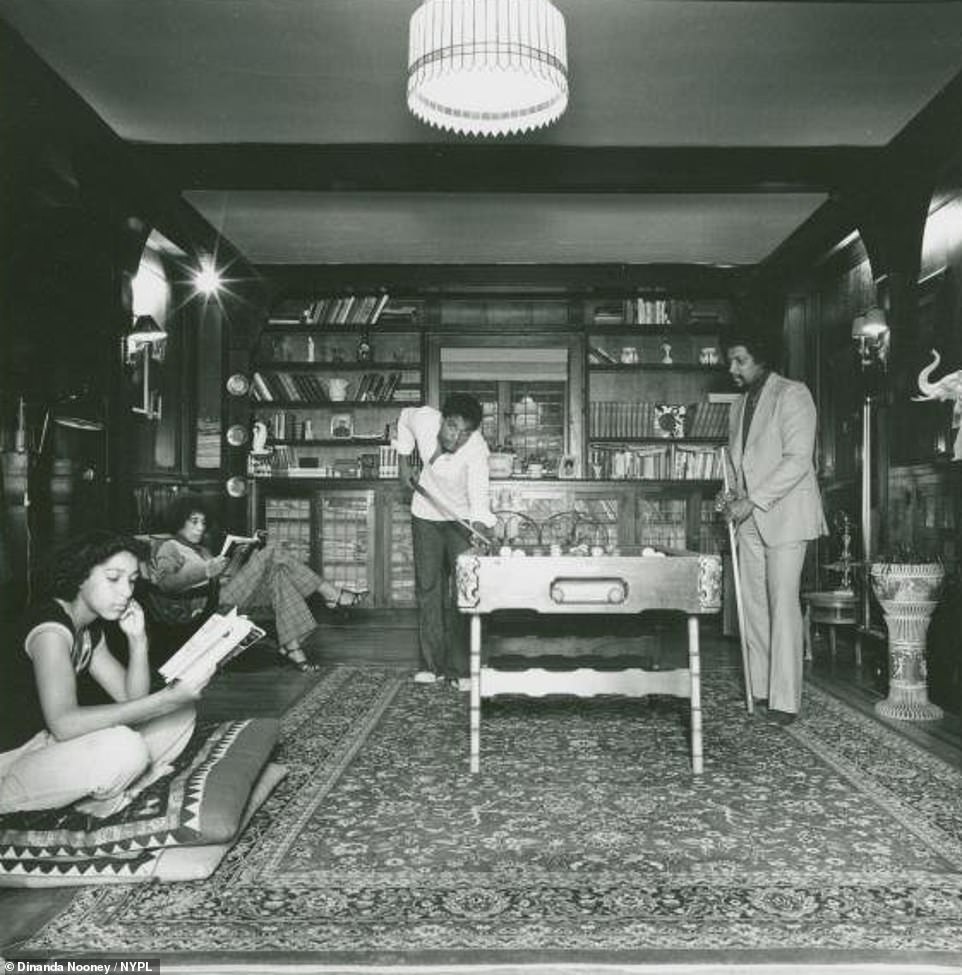 Erskin & Eleanor Agee and their children read, play snooker and relax at their luxuriously furnished home at 165 Argyle Rd., Flatbush, Brooklyn, on October 19, 1978 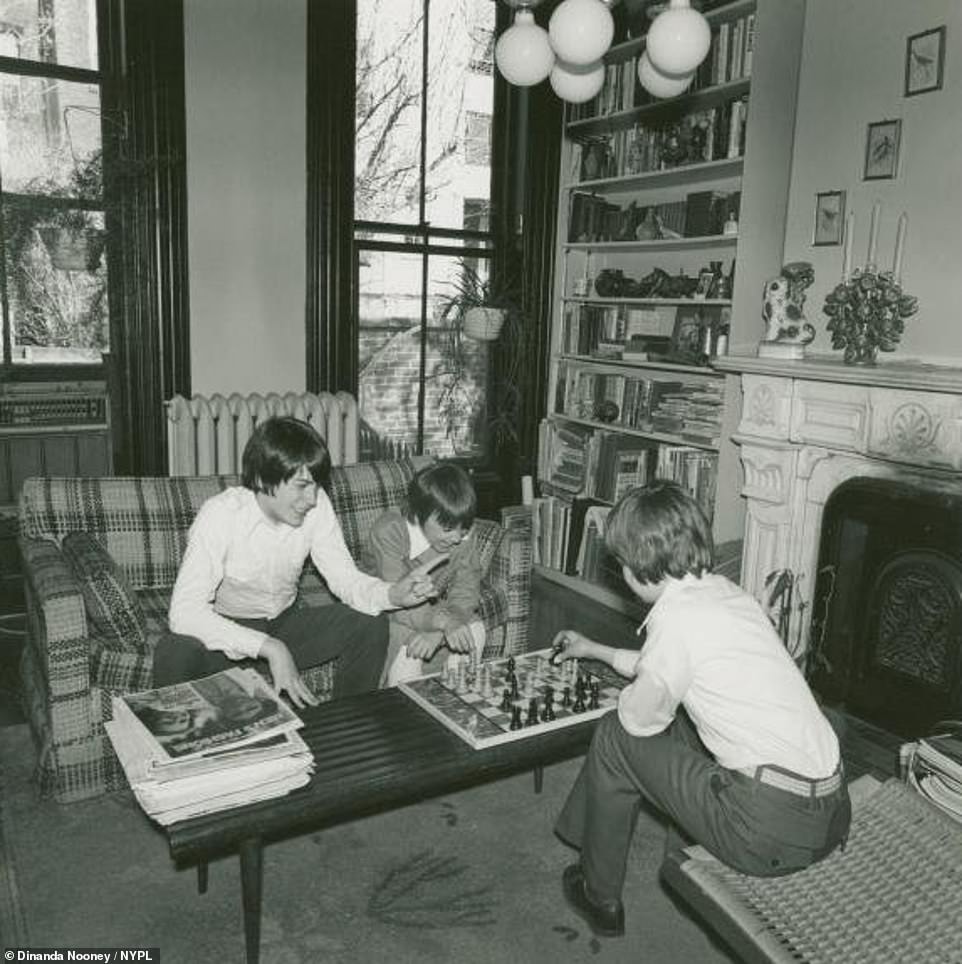 Boys playing chess at the home of Cornelius and Kathleen Walsh, 309 Vanderbilt Avenue, Fort Greene, Brooklyn. April 16, 1978. Nooney was known to keep written observations of the families she met, to accompany the pictures 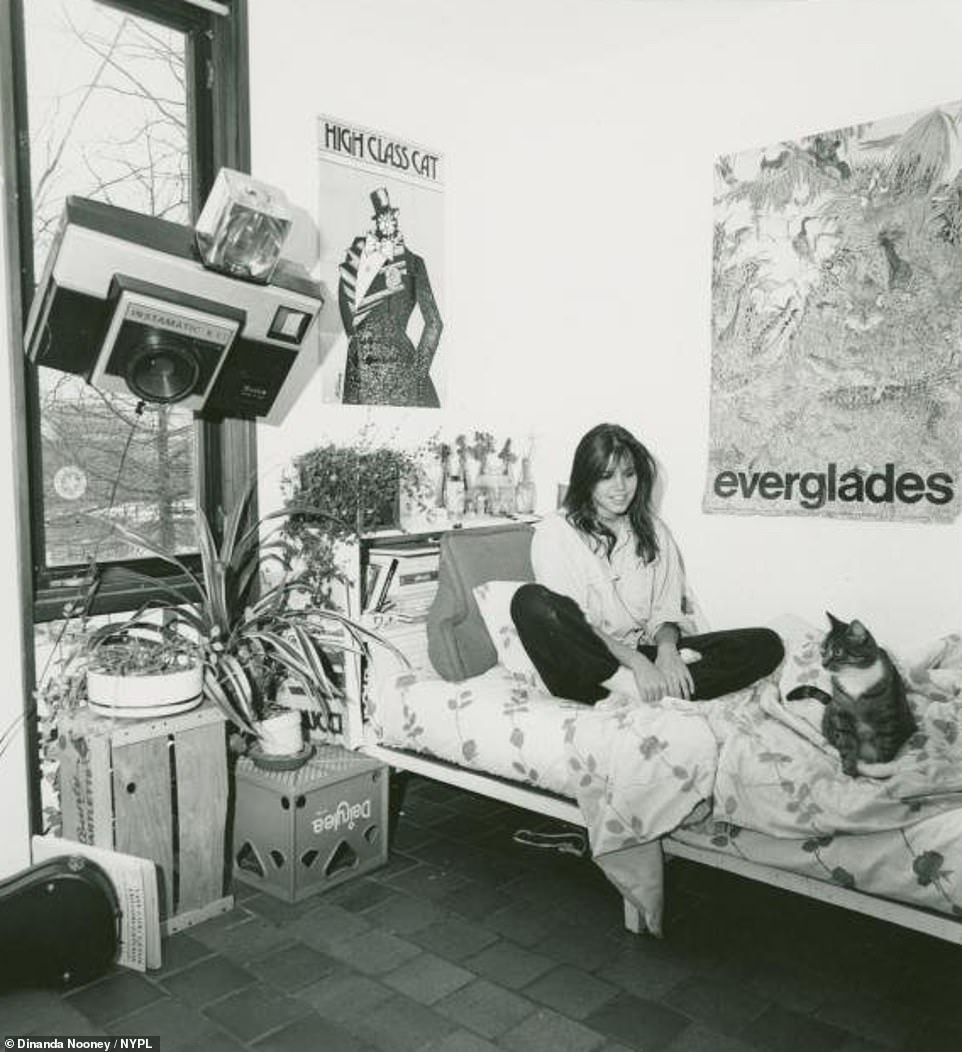 Julie Merz and her cat in her bedroom at 48 Willow Place, Boerum Hill, Brooklyn. January, 1978, that she shared with her architect father Joseph and mother Mary. Her portraits of young people gave a glimpse into the beginning of teenage pop culture, including posters on walls. This was the year Grease arrived in movie theaters 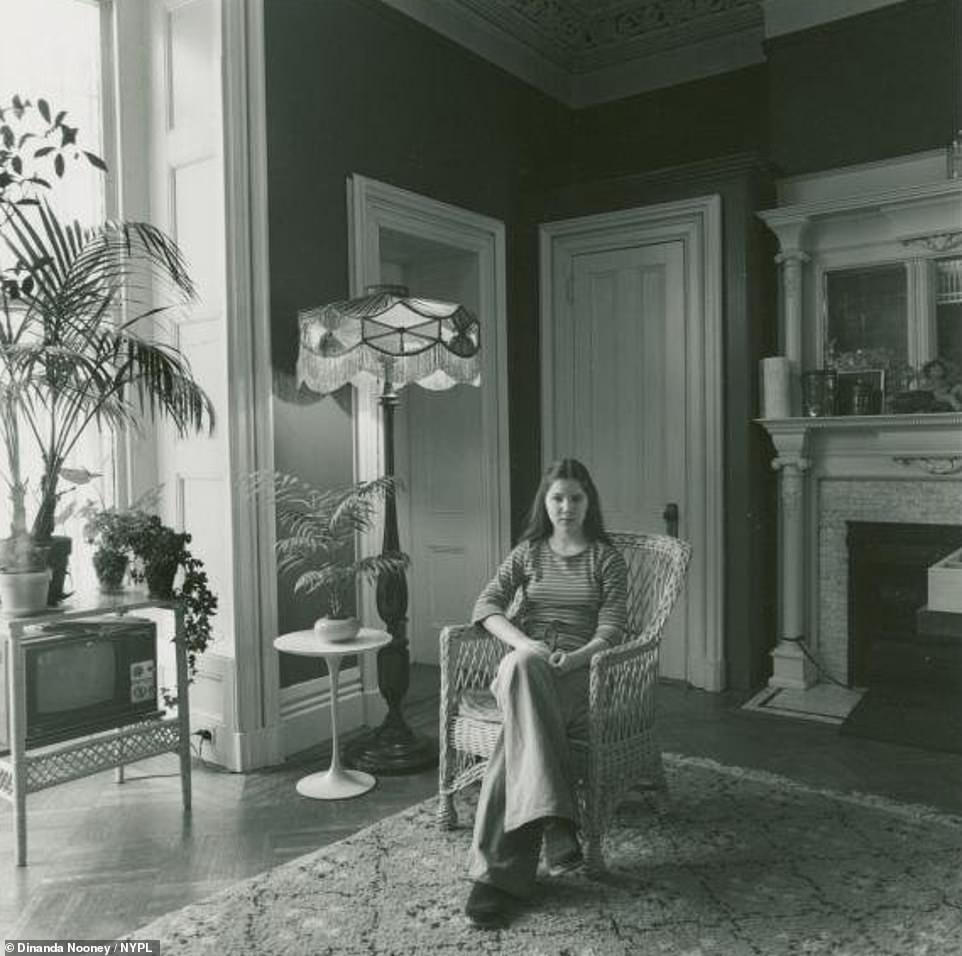 Carol Sullivan at home at 284 Clinton Ave., Clinton Hill, Brooklyn, on March 30, 1978. The glimpses inside these Brooklyn homes show a fondness in the era for rattan furniture 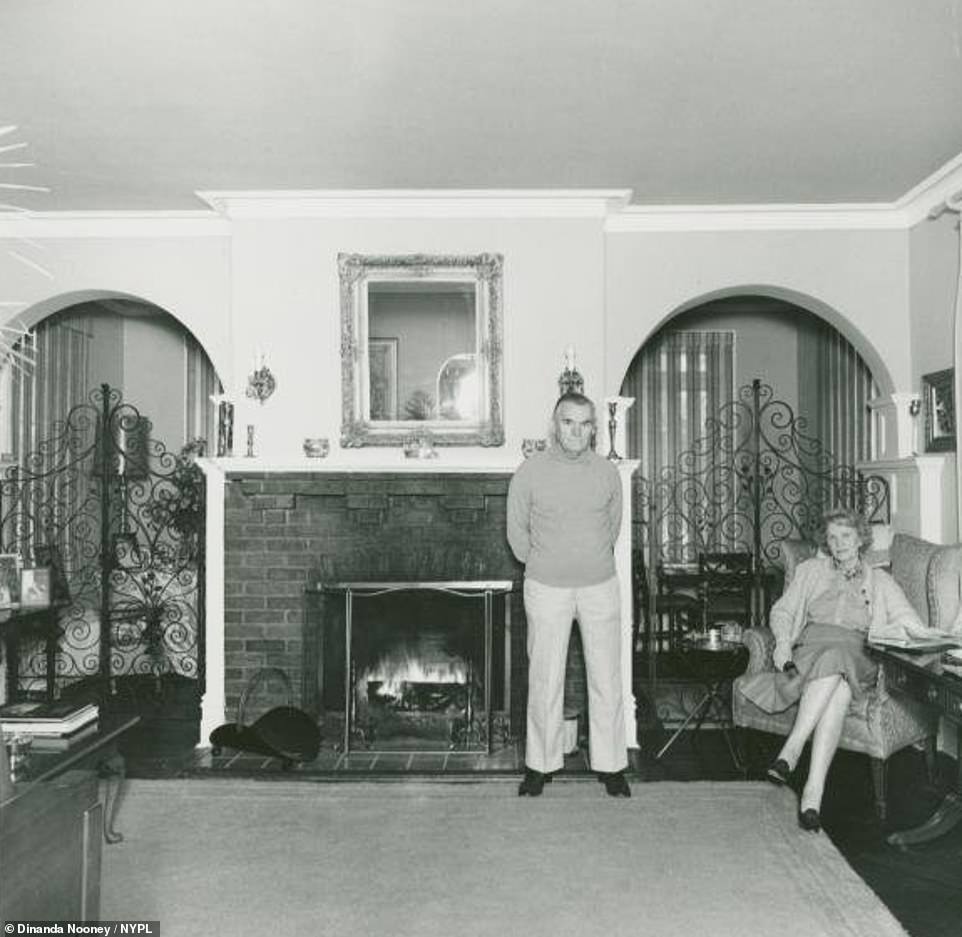 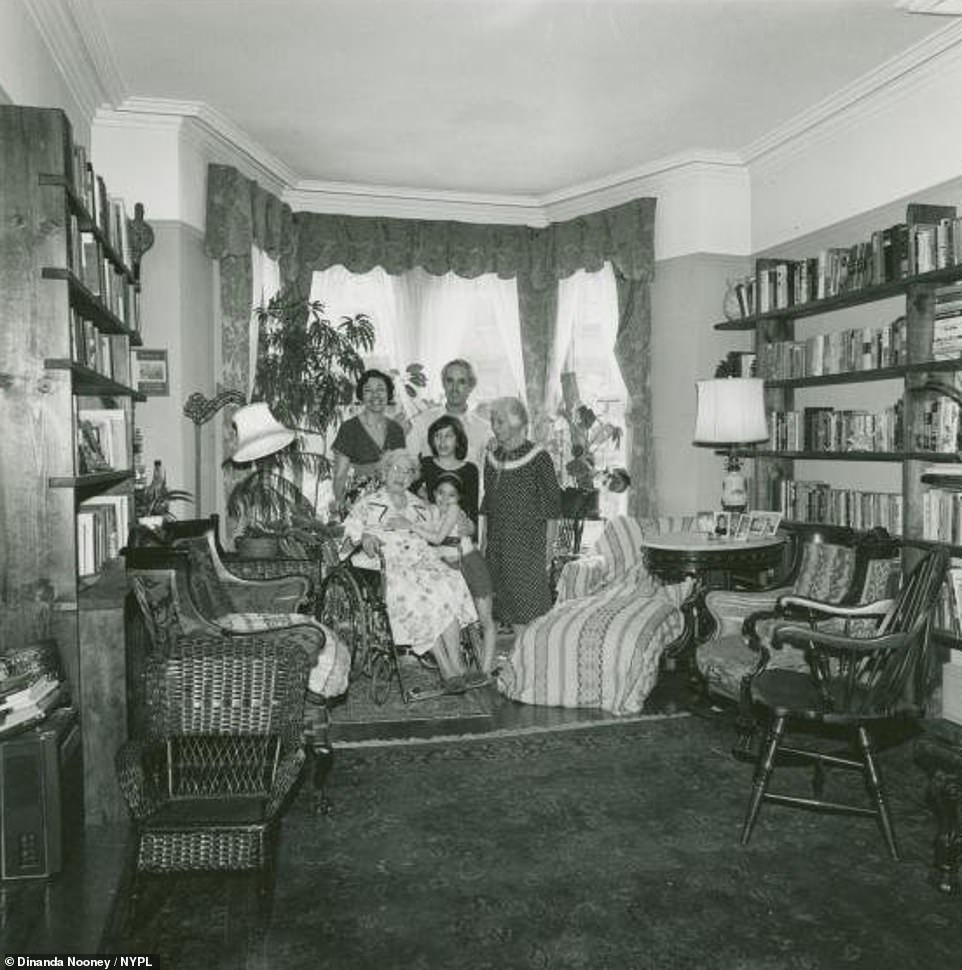 Nooney was known for meticulously documenting her work with detailed captions, as she considered her work ‘capturing history’.

Using a pen and paper she wrote on the front of a file folder or on sheet of yellow legal paper the name, date, address, photo release, date printed, if she had given a set to the subjects.

She was known to keep written observations made about each family.

Elizabeth Cronin, Assistant Curator of Photography at NYPL, said: ‘After a year and a half, she had over 576 photographs from all over the borough. Each photograph is labeled with the family name, address, and date,’ as reported in Gothamist.

She added: ‘Most of the photographs are of middle-class families and yet, they show a diverse range of lifestyles. The collection as a whole is a fascinating window into interiors in the late 1970s as well as it is an interesting study in portraiture and self-presentation.’ 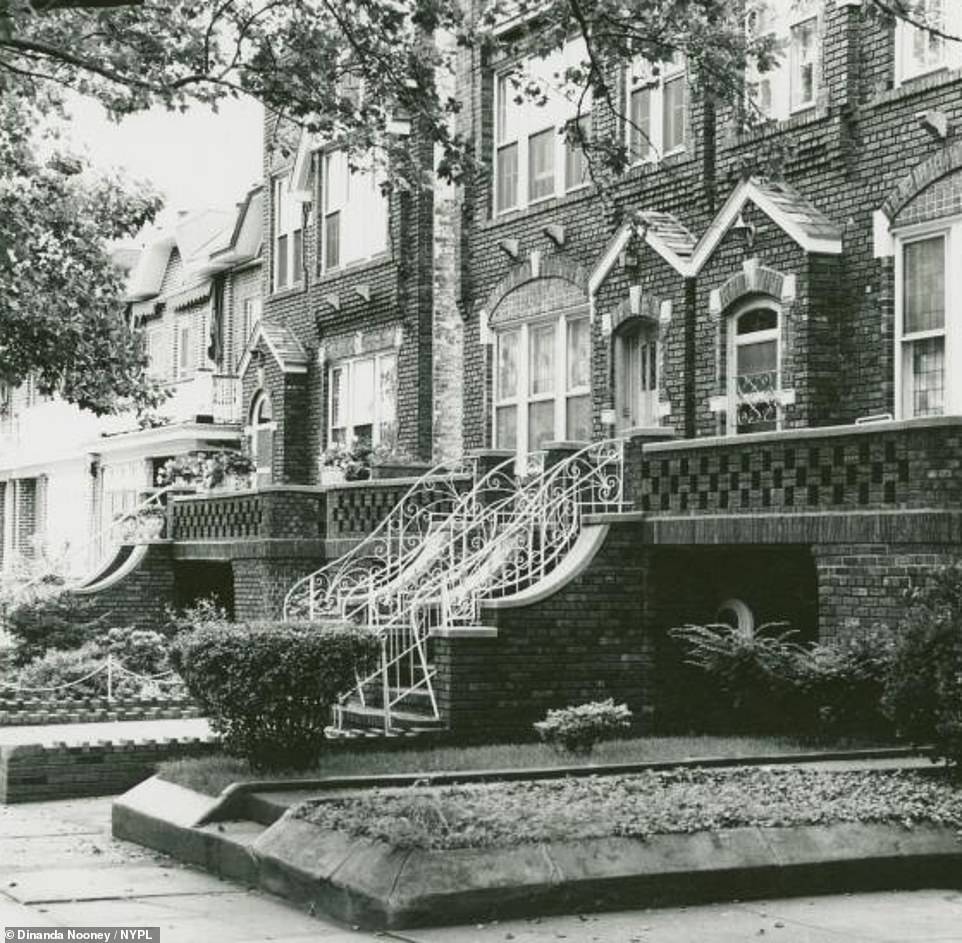 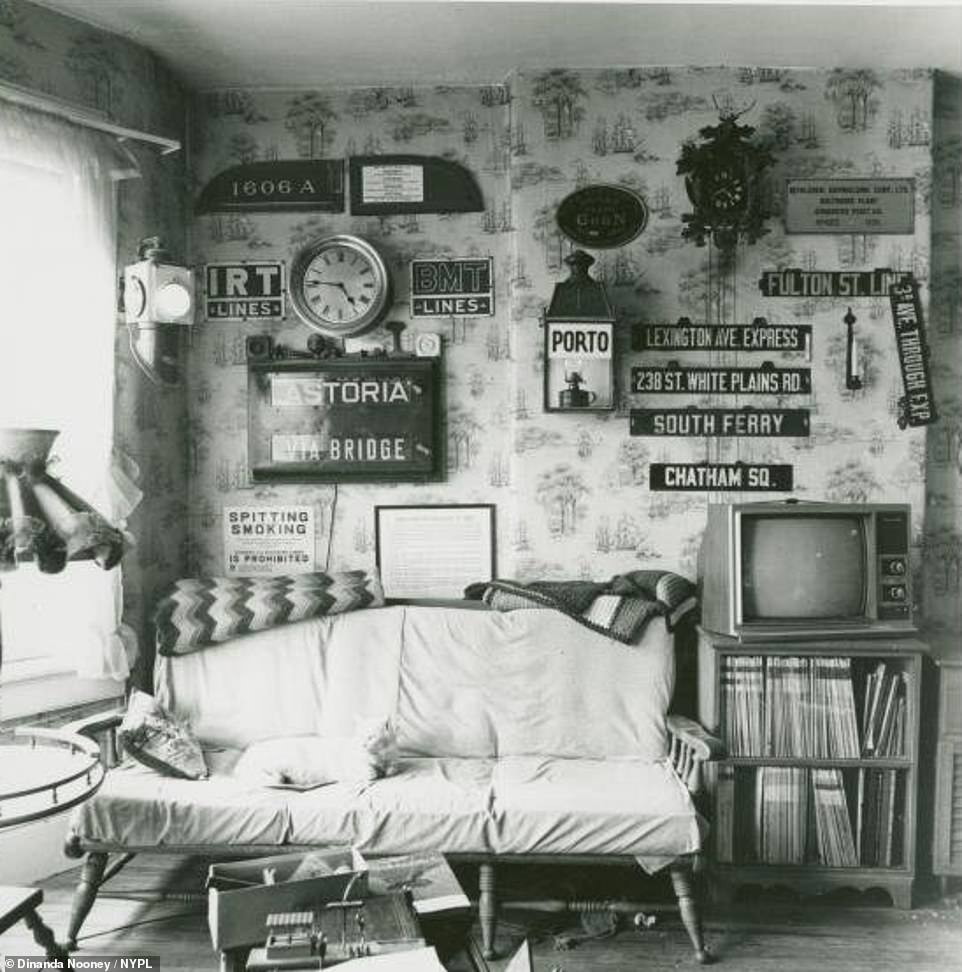 Conrad & Phyllis Milster. 178 Emmerson St., Clinton Hill, Brooklyn. May 9, 1978, featuring toile wallpaper and a collection of art on the walls 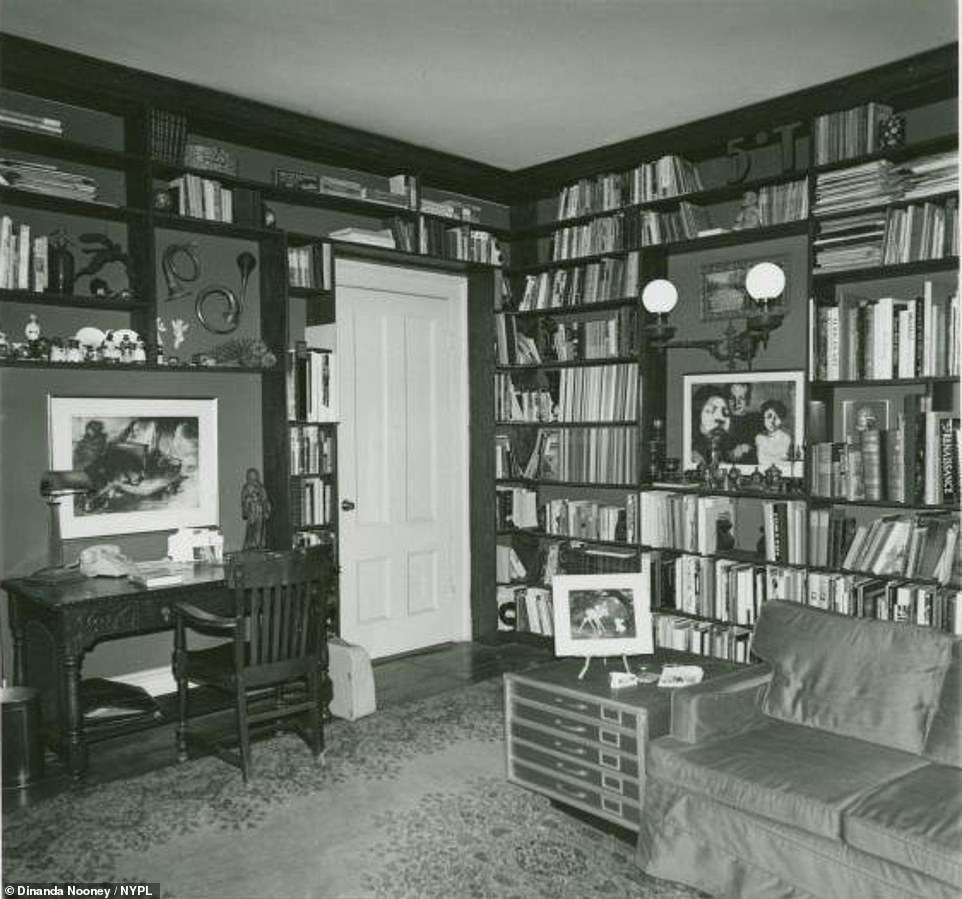 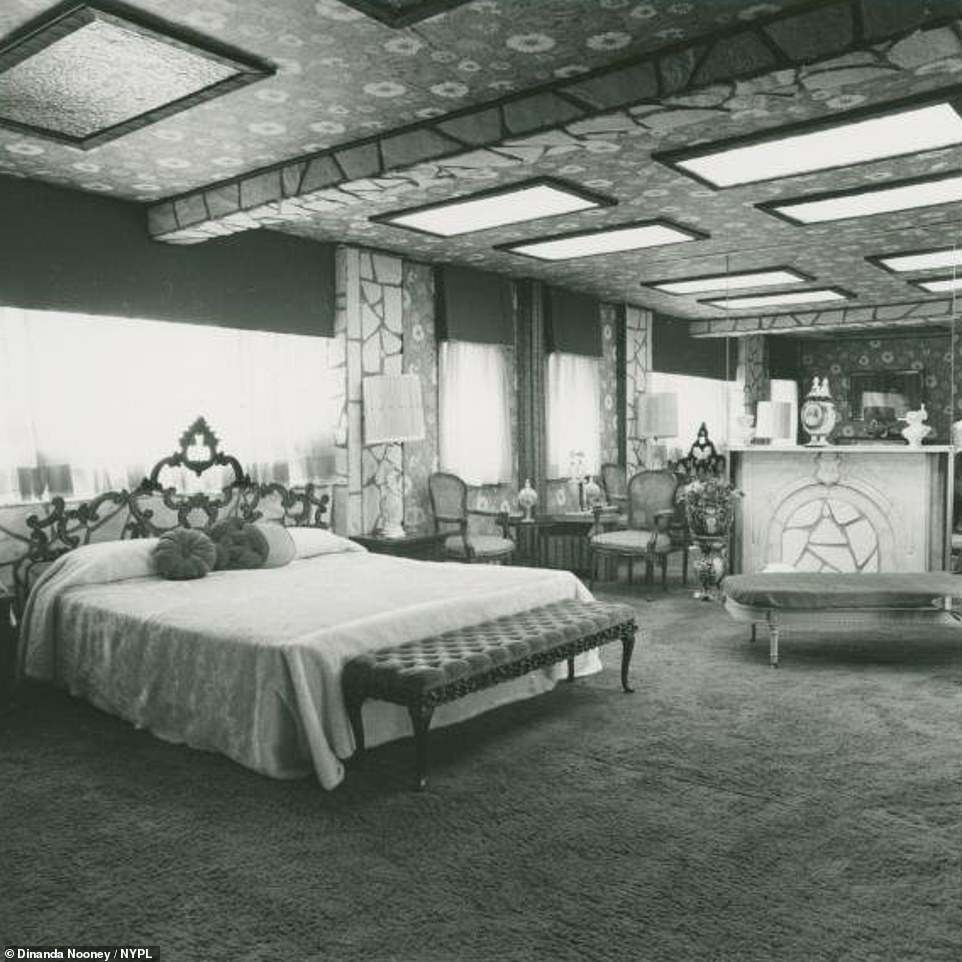 The bedroom of Johnny Redd at 416 Waverly Ave., Clinton Hill, Brooklyn. April 6, 1978. Nooney had an interest in the interior of people’s homes and her work gave a glimpse into late 1970s design- including wallpapered ceilings

Nooney often selected her candidates by referral, each family referring her on to someone new.

She built a raport, allowing her to photograph intimate moments like cooking dinner or comforting a child after a tantrum.

Nooney donated the photos to The New York Public Library (NYPL) in 1995. 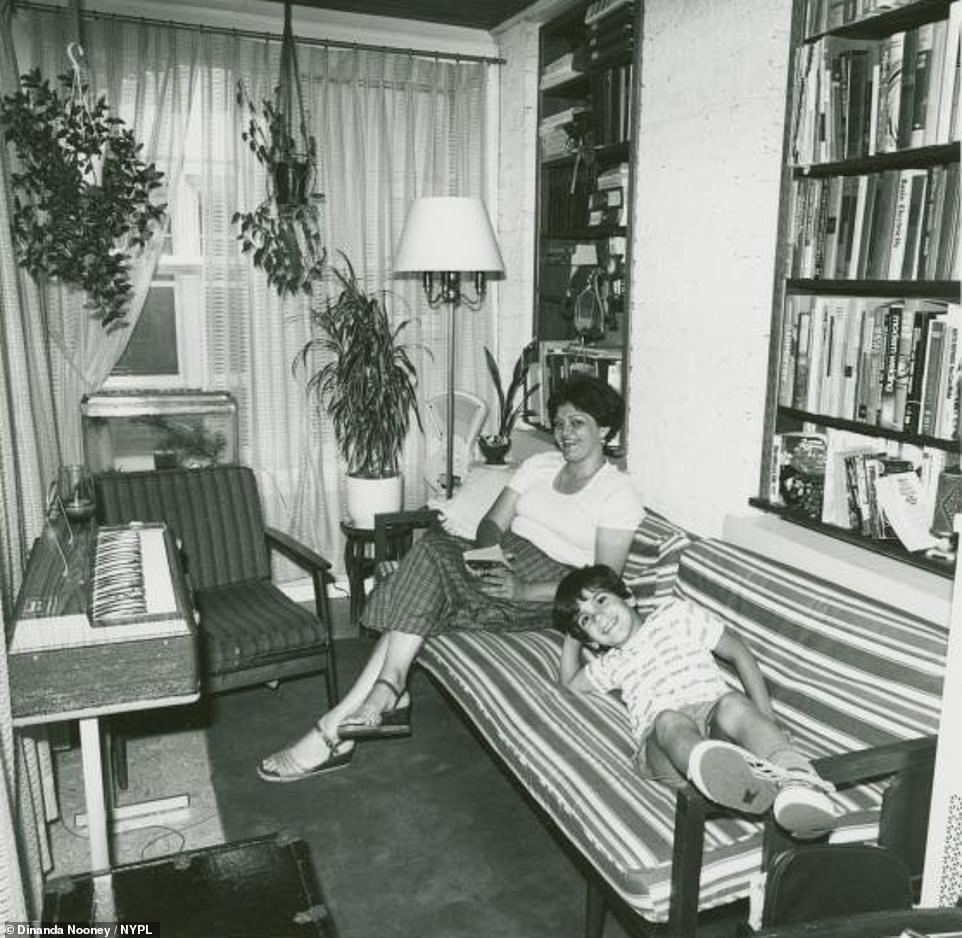 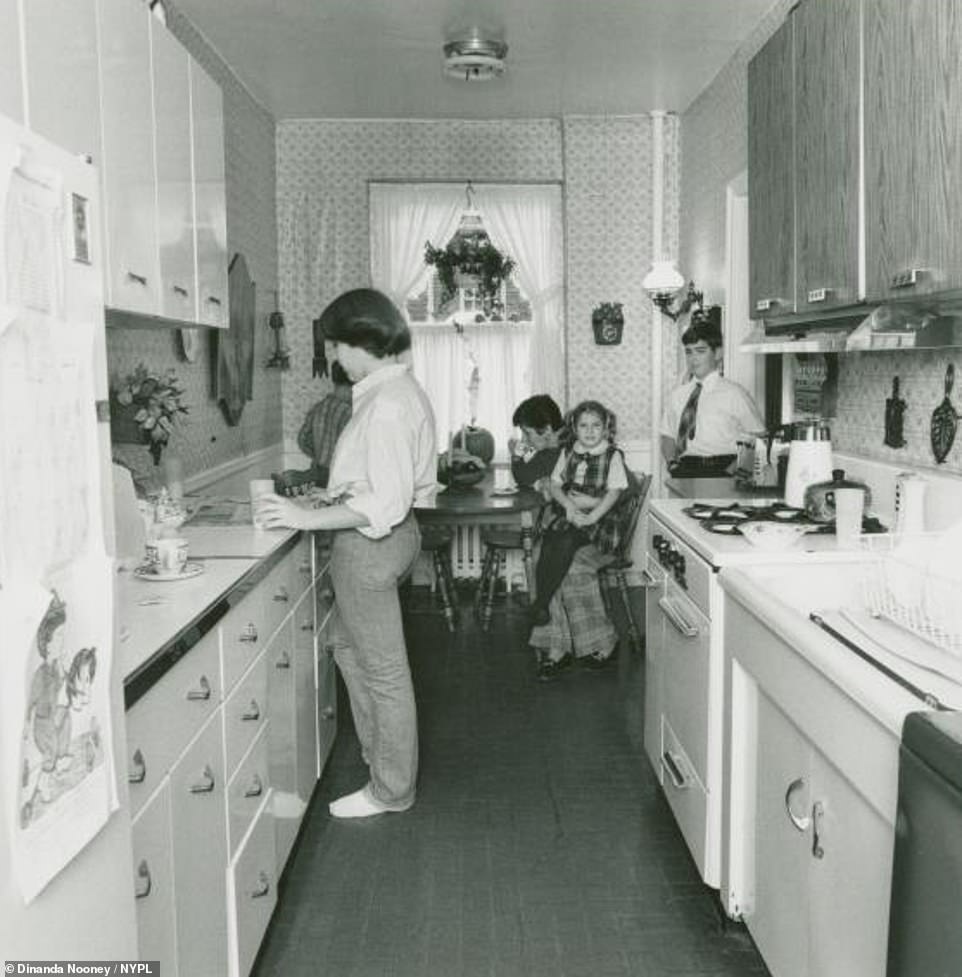 Diane McDonough & children, in the kitchen of their home at 8701 Shore Rd, Bay Ridge, Brooklyn, on December 1, 1978. On the left you can see drawings by the children stuck onto the fridge 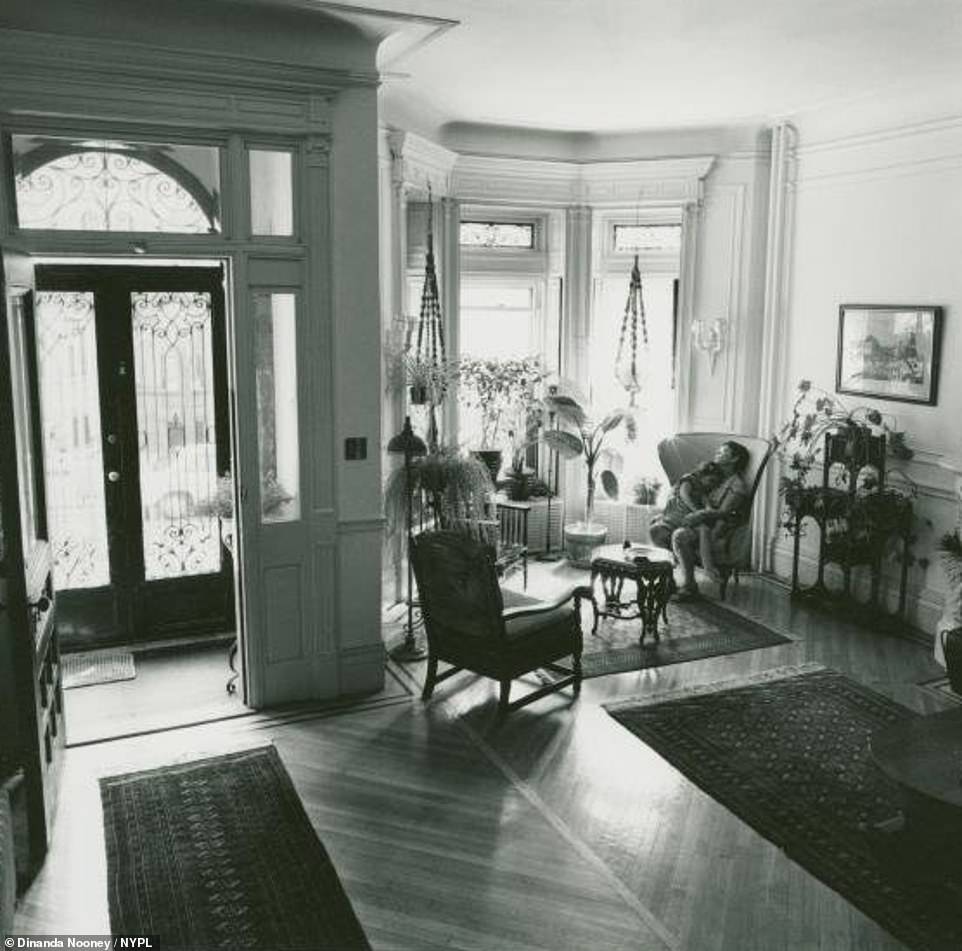 Tobi Needler and daughter share a hug at the home they live in with Tobi’s husband Geoffrey, at 51 Montgomery Pl., Park Slope, Brooklyn, on June 24, 1978. Note the parquet floors of the Brooklyn walk-up 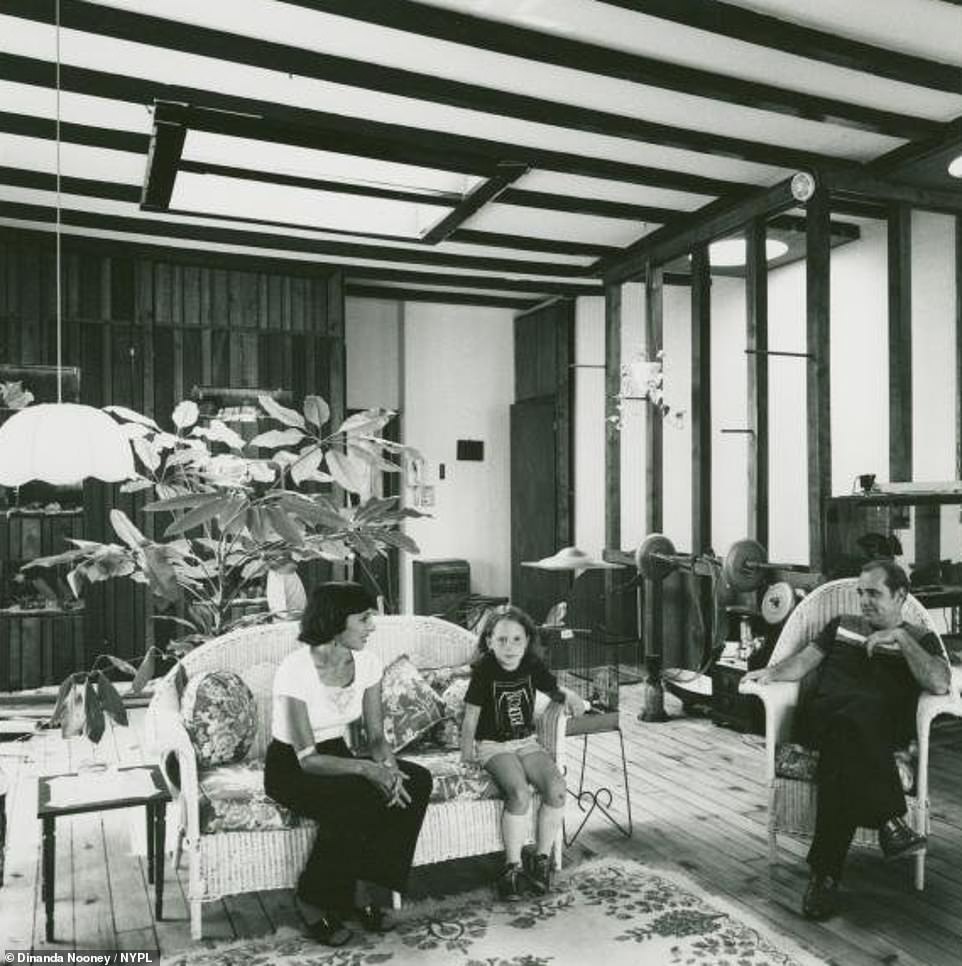 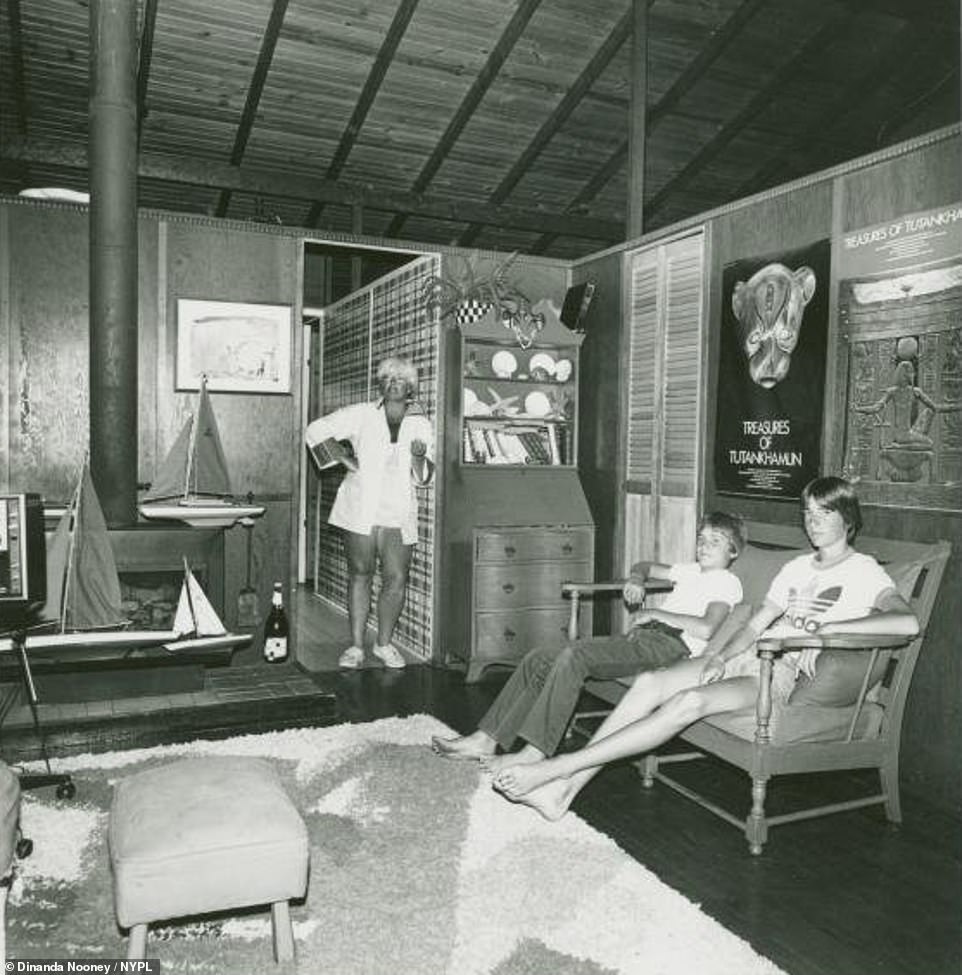 The cottage of Tom & Jean Kelly, pictured with her sons, on their summer holiday at 33 Newport Walk, Breezy Point, Brooklyn, on July 25, 1978 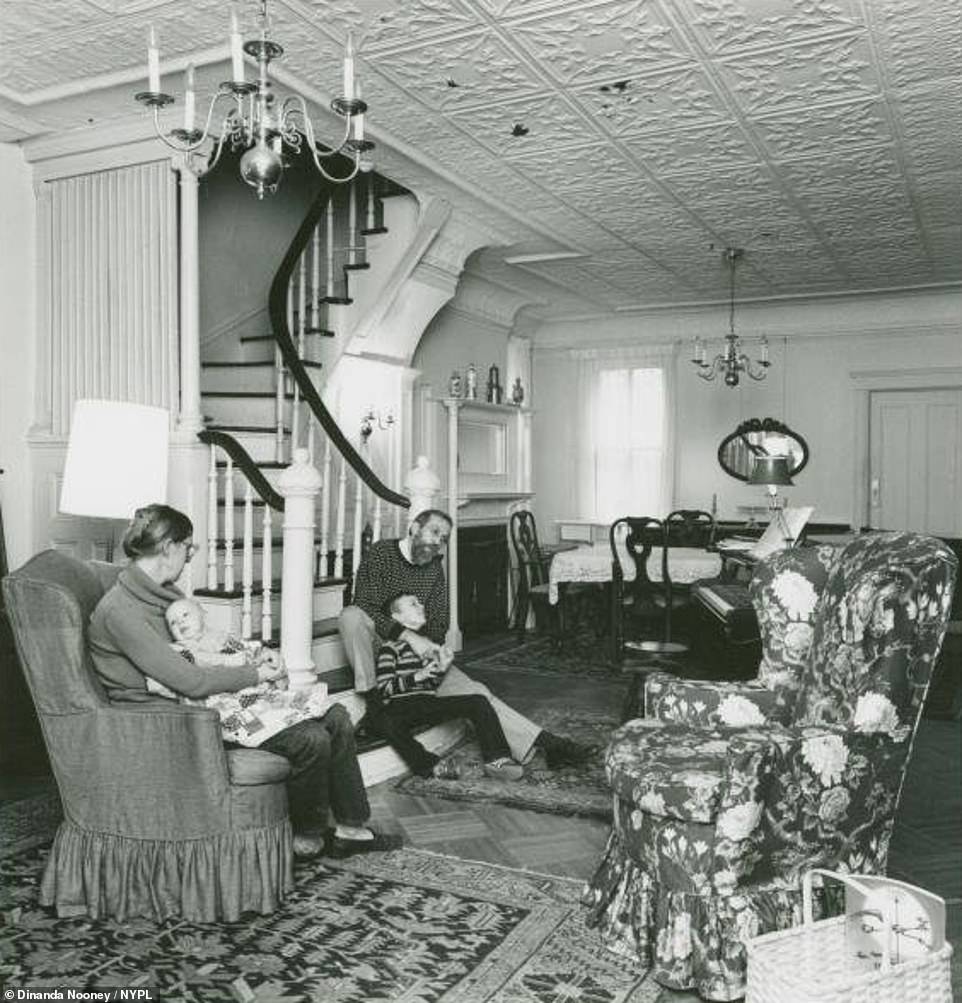 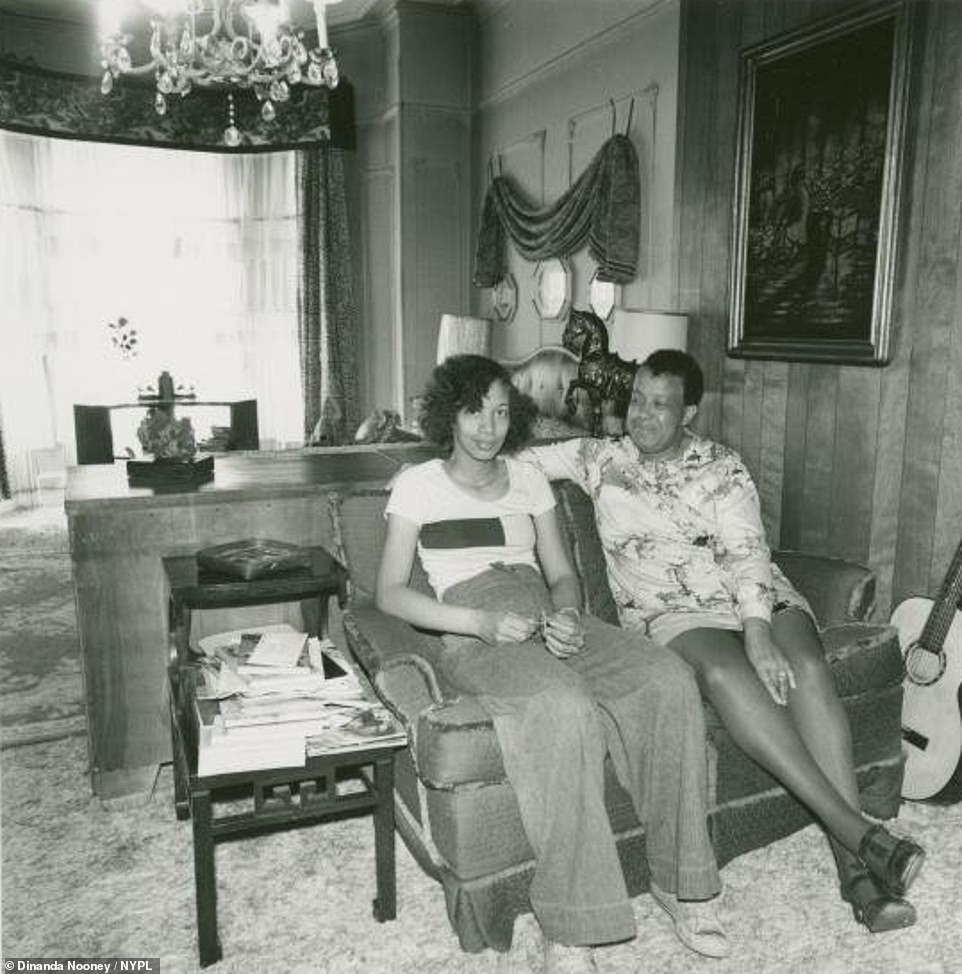 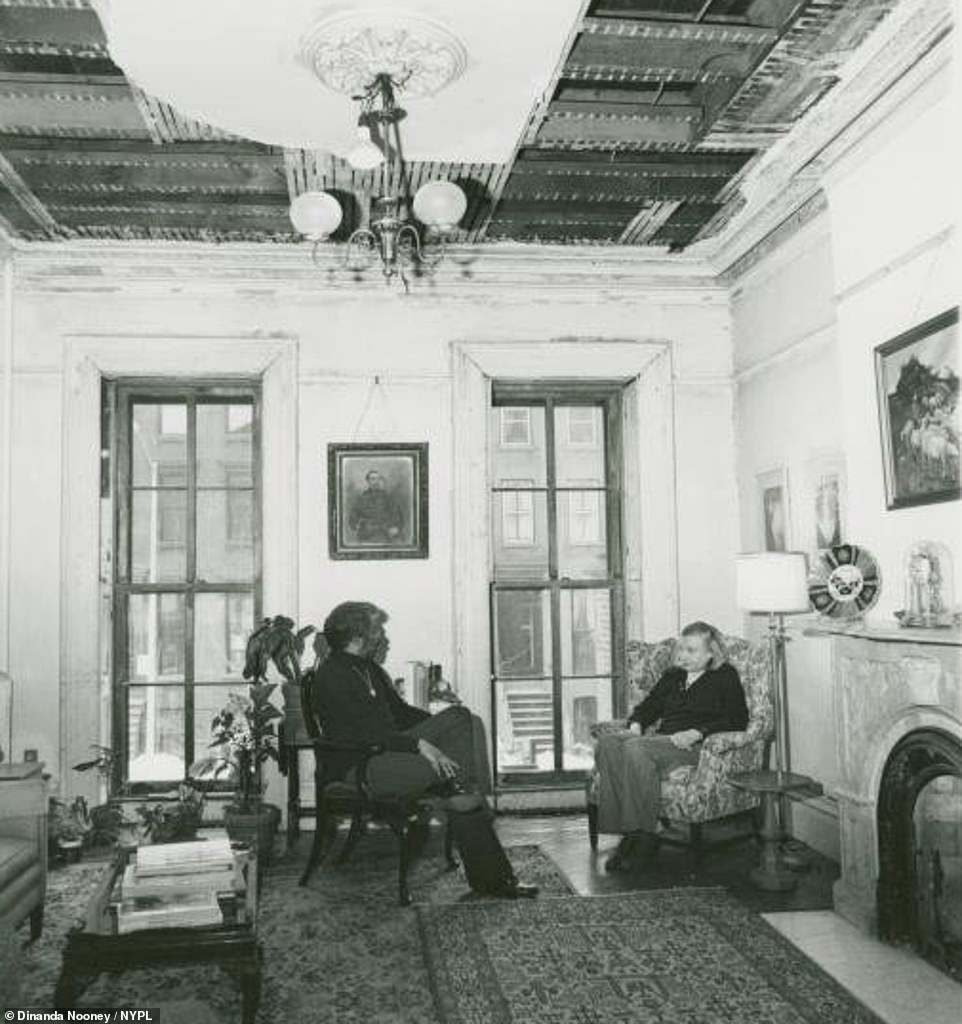 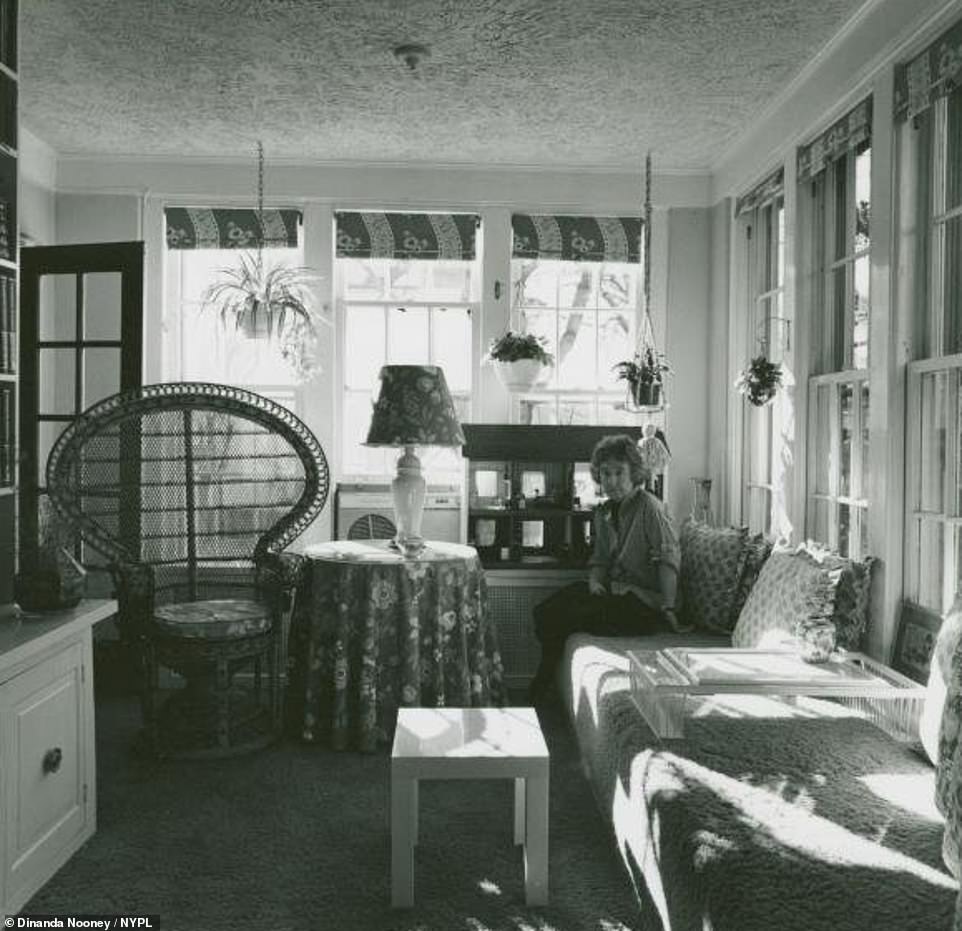 Maureen Watson in the home she shared with her husband Gerard at 66 82nd St., Bay Ridge, Brooklyn. December 1, 1978. Note the rattan Peacock chair- a classic 1970s item that would go on to become highly valuable in the vintage furniture market in the last 10-20-years 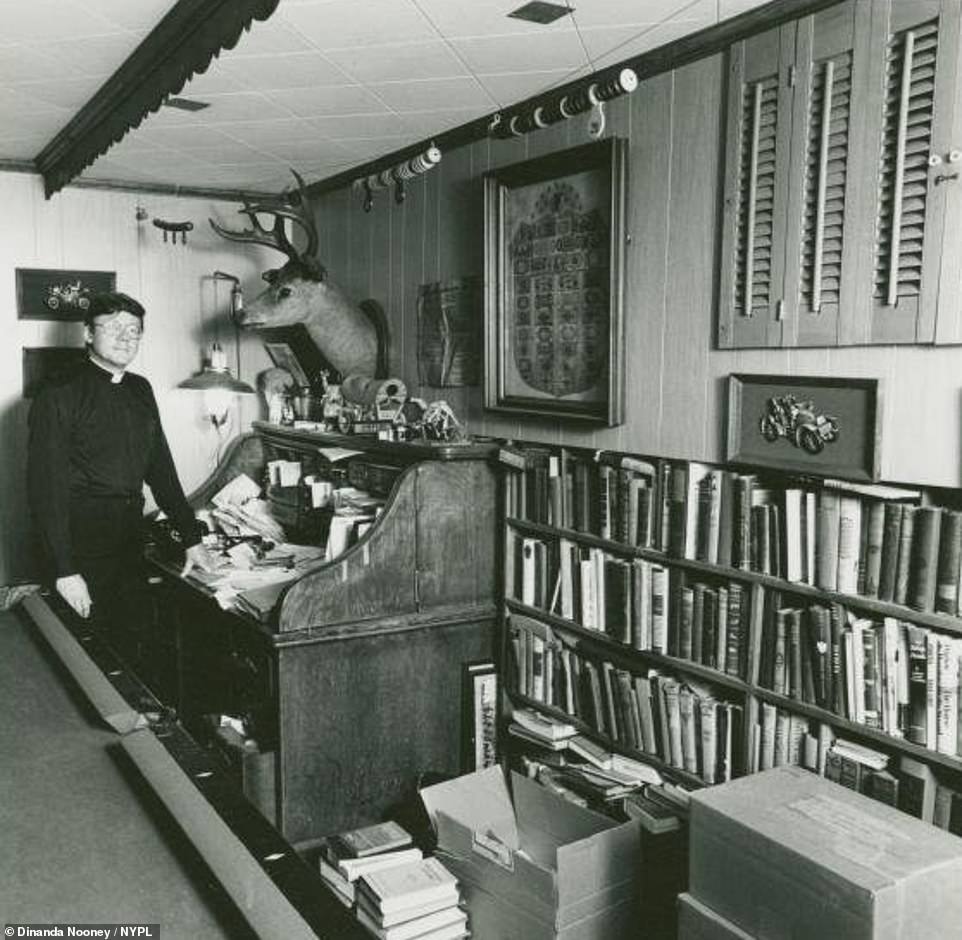 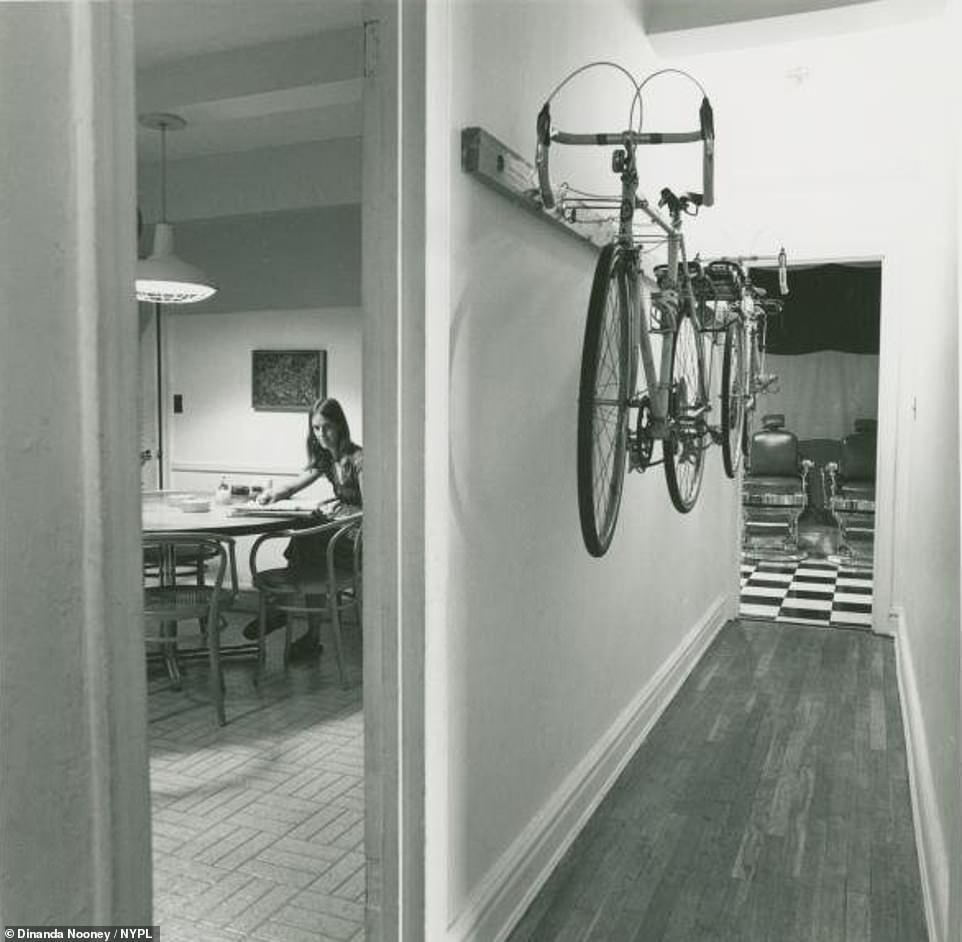 Barbara Rothenberg in the kitchen of her home at 135 Eastern Parkway, Prospect Heights, Brooklyn. June 9, 1978, behind a beauty salon, chairs just pictured