Inside the ‘very powerful’ 48 Club in China ‘grooming’ storm

A powerful network of British business and political elites would rub shoulders with Chinese dignitaries and executives, an insider has revealed to MailOnline.

London’s 48 Club, which aims to strengthen the UK’s ties with Beijing, has come under the microscope after an explosive new book claimed its members were being ‘groomed’ by the Chinese state.

The Club has rubbished claims made in the Hidden Hand as ‘inaccurate’ and insisted it is an ‘independent’ company.

Now, a former member of the 48 Club has lifted the lid on the organisation which counts ex-ministers and corporate heavyweights among its associates.

A picture of former home secretary Jack Straw at an event has also surfaced after he denied ever hearing about the club.

Speaking on the condition of anonymity, the source said the group was ‘very powerful’ and would attract the ‘crème de la crème’ of UK society.

48 Group Club chairman Stephen Perry meets with President Xi in Beijing in 2018. Peter Mandelson is also pictured in the background 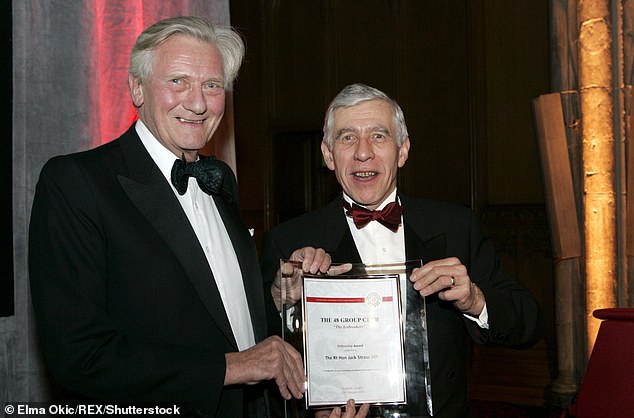 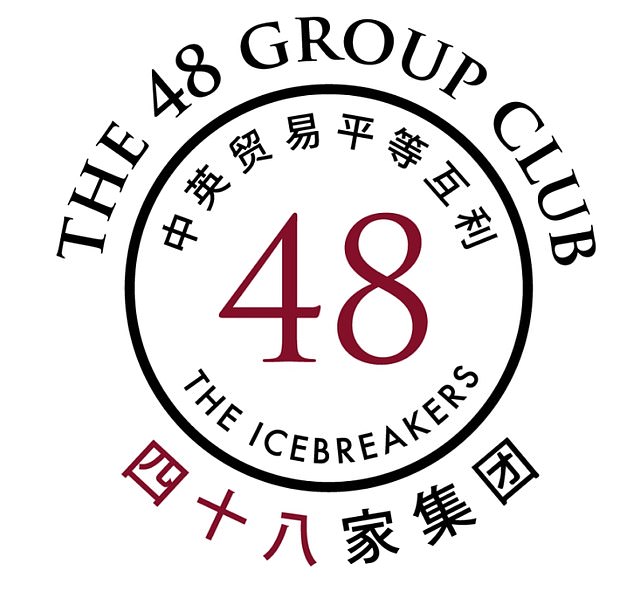 On the 48 Club’s website, which was briefly taken down amid the book storm, its mission statement is to foster commercial and cultural harmony between Britain and China

They recalled how Beijing’s ambassador in London would come to events to bang the drum for Sino-Anglo relations by stressing China’s economic growth and saying the nation would welcome British investment.

Mayfair art galleries were among the venues where the ‘Who’s Who of China’s big companies’ would network with the 48 Club, the ex-member said.

Describing who would attend these networking events, they told MailOnline: ‘Senior business people, senior diplomats, British diplomats, businesses owners, people who are prominent, they are C-level executives of big companies, both UK and Chinese who have interests in China.’

Detailing which Chinese companies would attend, the source added: ‘Very powerful people. People who are there are the decision makers within society.

‘The UK head of Huawei was there, the head of China Telecom was there. I don’t know what influence they would have at those meetings, but it’s people meeting each other.’

They added: ‘The events were to promote cultural harmony between the UK and China, to promote business relationships… You would have the Chinese ambassador there.

‘There was a networking dinner, a breakfast arranged by the 48 club with the China-Britain business club in partnership. So it was like trade events.’

Tony Blair himself has been named as an honorary fellow on the group’s website, but his office had no idea why he was listed.

Amid confusion, the 48 Club have clarified: ‘Associate members have no connection with the Club other than that honour, unless a separate contribution to the Club has been established.’ 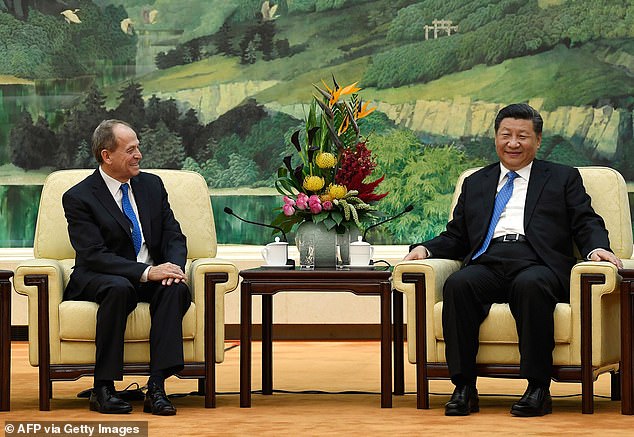 China’s President Xi Jinping (right) meets with the 48 Group Club chairman Stephen Perry at the Great Hall of the People in Beijing on October 16, 2018 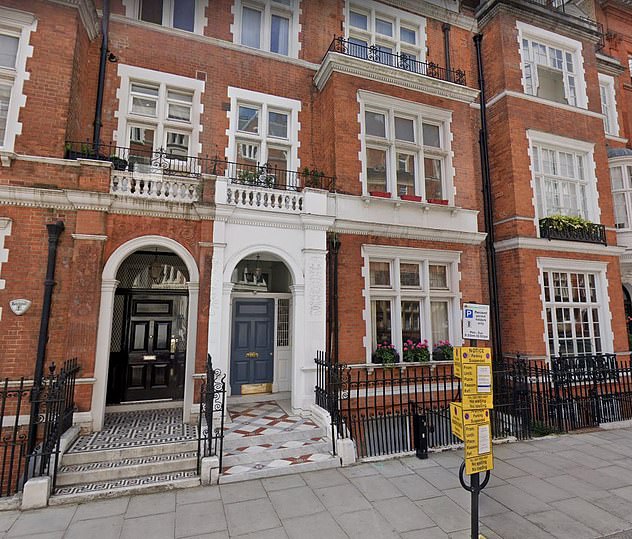 The 48 Group Club, also known as ‘The Icebreakers’, are a 500-strong outfit with headquarters in Bayswater, W2

The source, who has not been a member for several years, said that they never saw any lobbying by Chinese companies done publicly.

They also cast doubt on the group being used as a vehicle for the Chinese Communist Party to exert influence overseas.

He said of 48 Club chairman Stephen Perry: ‘I’ve known Stephen for some time and it’s always been about business, never about anything else.’

On the 48 Club’s website, which was briefly taken down amid the book storm, its mission statement is to foster commercial and cultural harmony between Britain and China.

It adds: ‘The Club offers an important – and often key – network of contacts for those active in building relations through any field from commerce to culture.’

The ex-member said that members would gain access to senior Chinese officials at events.

They told MailOnline: ‘Different provinces of China have their own Mayors and they would have trade breakfast forums to promote that particular province.’ 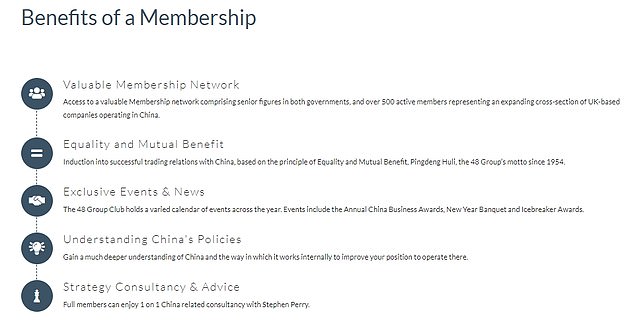 The 48 Club is a 650-member strong organisation which helps British companies break into the Chinese market, according to its website. It offers a range of levels of membership and personal consultancy from chairman Stephen Perry 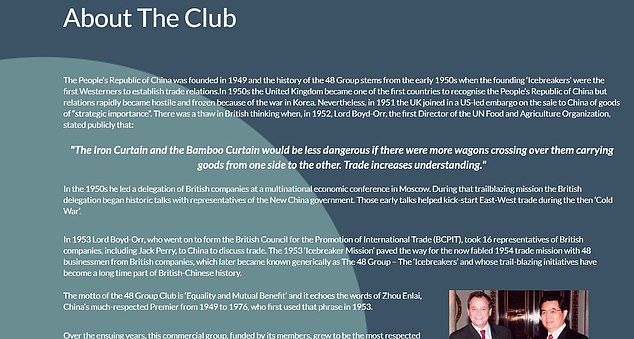 Some of these events would be sponsored by banking and corporation giants, said the source.

What is the 48 club? A group of British elites to foster relations with China

The 48 Club is a 650-member strong organisation which helps British companies break into the Chinese market, according to its website.

It dates back to the efforts of businessmen to forge greater Sino-Anglo alliances following the formation of the People’s Republic of China in 1949.

It paved the way for a second visit in 1954 where 48 representatives from British companies embarked on a trade mission to China.

Since its inception, the club claims to command gravitas among the Chinese businesses community to the extent that it is ‘the most respected name in China-Britain trade’.

The group was particularly close with former Chinese premier Hu Jintao, who is pictured with several of the 48 club’s members, including Perry.

The club hosts seminars and dinners for its members, while also offering ‘support and consultancy services to British companies entering China’s market’.

The 48 Club claims to be funded by its members.

Mr Perry is managing director of the London Export Corporation, a consultancy firm about the Chinese market.

‘Practically, the Who’s Who’s of China’s big companies and their senior managers would be there.’

However they stressed that membership was not just limited to big business, but also entrepreneurs hoping to break into the Chinese market.

‘I remember one person was thinking of selling British baby milk powder to China. That’s an example, he was there looking for people, partners or buyers,’ he said.

The 48 Club said in a statement: ‘It has been reported in the media that we have initiated legal proceedings against the authors of a book entitled Hidden Hand.

‘This is not the case. The Club’s legal advisors wrote to the publishers after the book was drawn to the Club’s attention through a German media enquiry and the Club and its members were previously unaware of the book.

‘It became clear that the book contained a number of inaccurate and potentially libellous statements relating to the role and function of the 48 Group Club and some of its members.

‘On taking legal advice the Club wrote to the publishers of the book to request sight of the text and opportunity to correct and respond to the errors in the book.

‘Errors have been acknowledged by the publishers and we are working to correct the others.’

Relations between Beijing and the West have soured during the coronavirus crisis as many governments accuse China of covering up its early outbreak and allowing it to spread.

Beijing is also being increasingly assertive in its foreign relations, taking greater control of Hong Kong and projecting its naval power in the South China Sea.

A leaked dossier from the Five Eyes intelligence alliance also accused Beijing of ‘disappearing’ whistle-blowers who exposed the seriousness of the coronavirus , while Donald Trump fanned conspiracies of Covid-19 spilling out of a Wuhan laboratory.

And in Britain, a Tory backbench rebellion and mounting pressure from the White House has forced Boris Johnson to review the decision to allow Huawei to build the UK’s 5G network.

America is also urging the UK to ditch Huawei and Google has banned the Chinese telecoms giant from its apps.

Critics fear that giving Huawei access to the country’s vital telecoms infrastructure could be used by China to steal secrets from Britain or launch crippling cyber attacks.

Tory MP Bob Seely told MailOnline: ‘There is a real need for foreign lobbying laws in this country. Our lobbying laws are very weak compared to other countries.

‘The US brought in tight lobbying laws in the 1930s and Australia did so last year.

‘We badly need a foreign lobbying law so if people in power – politicians, current officials, soldiers, the great and the good so to speak – are lobbied, the rest of us need to know.’

Who are the powerful movers and shakers who lead the 48 Club?