The crazy night out shared by Married At First Sight stars during filming of the cast reunion has all been captured on my car dashcam as I found myself driving some of  the main cast members around Sydney’s nightspots.

The reunion episode which screened on Sunday was filmed back in February, and when the cameras weren’t rolling on the dramatic season finale, the stars really let their hair down.

Pressed into service as their designated driver, I ferried them across the city as the dashcam captured their excited banter.

This is the inside story of how the night unfolded.

The cast members began returning to Sydney after a two-month break on February 6, four days before filming the reunion.

And while some cast members were still adjusting to becoming household names through their roles on Australia’s most watched and discussed reality program, others wanted to make the most of their fifteen minutes of fame.

The cast knew me all too well, as I spent much of the previous two and a half months camped outside their Sydney CBD apartment to get the inside stories.

Inside the wild Married At First Sight after-party you didn’t see on TV as the boozy brides and rowdy grooms stay up until 3am in Sydney – and bring Daily Mail Australia reporter ALI DAHER along for the ride. Pictured alongside: Beth Moore, Booka Nile and Jake Edwards 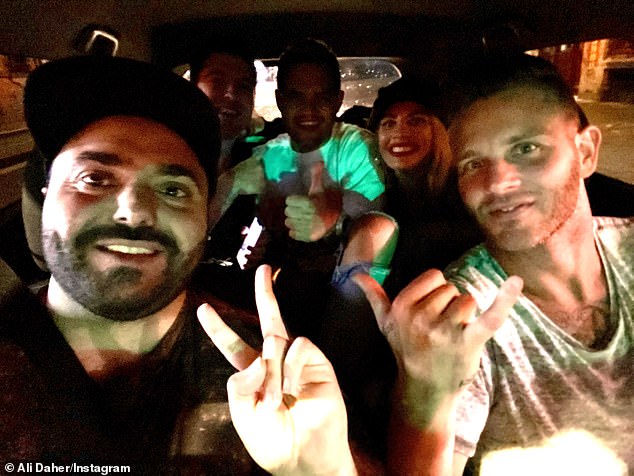 Car selfie: The cast already knew me by name, having spent the past two and a half months camped outside their Sydney CBD apartment to catch any drama.

After learning when the cast would be flying in, I knew the airport was the place to be, to see which couples were still together and who had split since filming the final vows.

Booka Nile was among the first cast members to arrive in Sydney, and a lot had changed since she was last in the city just a few months earlier.

She was wearing a face mask and appeared overwhelmed with the number of photographers waiting for her arrival. 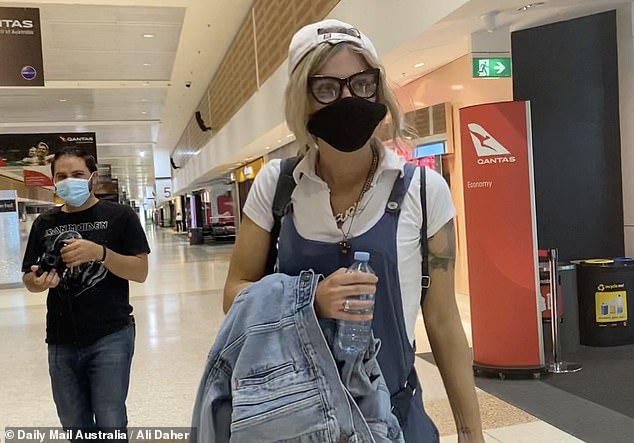 Incoming! Booka Nile (right) was among the first cast members to arrive in Sydney, a lot had changed since she was last in Sydney just a few months earlier

‘Welcome back to Sydney, are you ready for the reunion?’ I asked.

‘I am, I’m wondering if we have to wear masks or not because apparently, they’re very mandatory now,’ she replied.

‘What about outside? I’ve worn this for like four hours now and my face is feeling dirty,’ she then asked 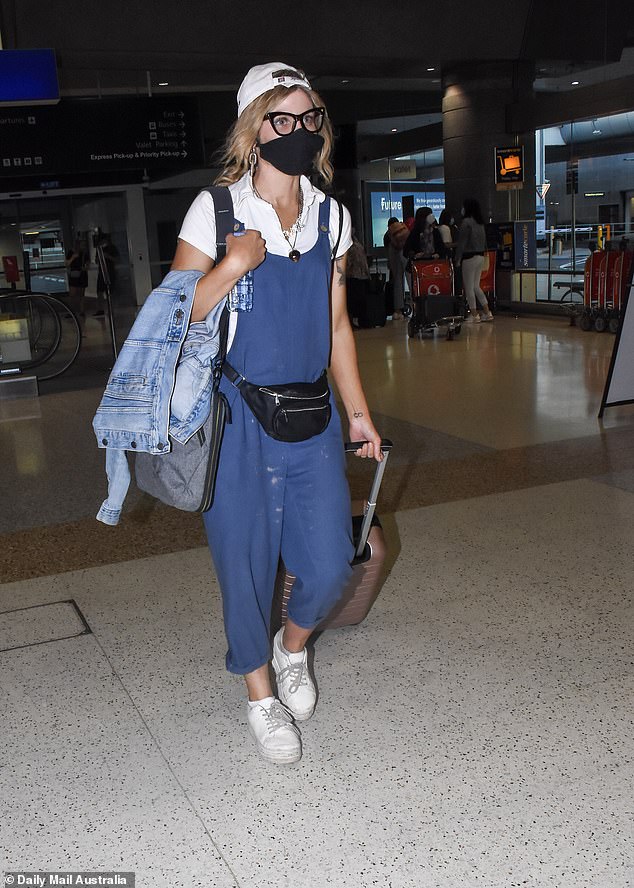 ‘Welcome back to Sydney, are you ready for the reunion?’ I asked.  ‘I am, I’m wondering if we have to wear masks or not because apparently, they’re very mandatory now,’ she commented- referring to the recently introduced rules that face masks must be worn inside the airport

We briefly chatted about her new haircut before I walked her over to the express pick up where she took an Uber.

Jake, the 32-year-old charity CEO and former AFL player, was one of the nicest cast members to speak with during filming, and also the most active. 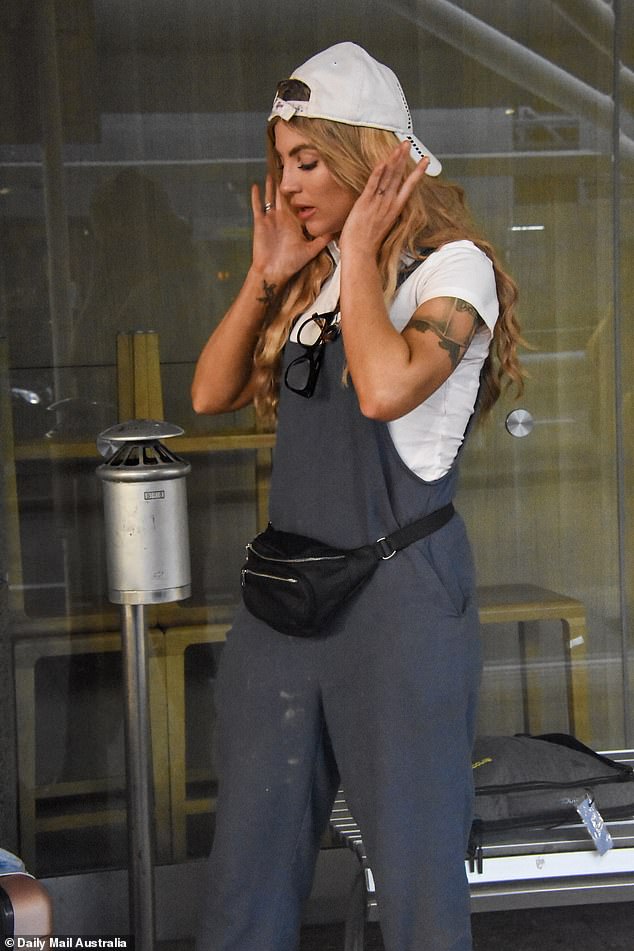 Indie cool! We briefly chatted about her new haircut before I walked her over to the express pick up where she was picked up by an Uber

You could set your watch by his daily double espresso shot at the nearby cafe or coming back from a jog.

Having just completed a COVID-19 test after walking off the plane, he did not seem in the mood to talk on camera.

Instead, I cheekily asked him where his ring was, trying to get an indication whether he and his on-screen ‘wife’ Beck were still together. 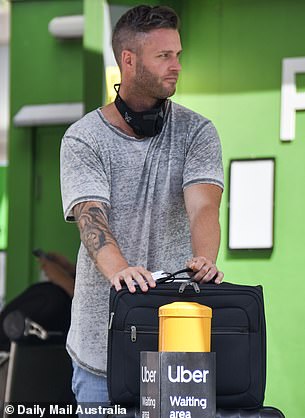 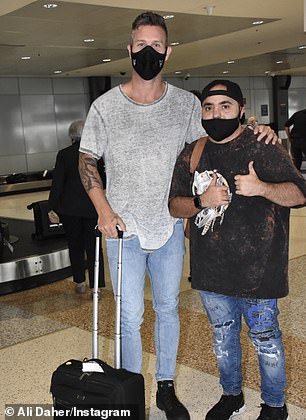 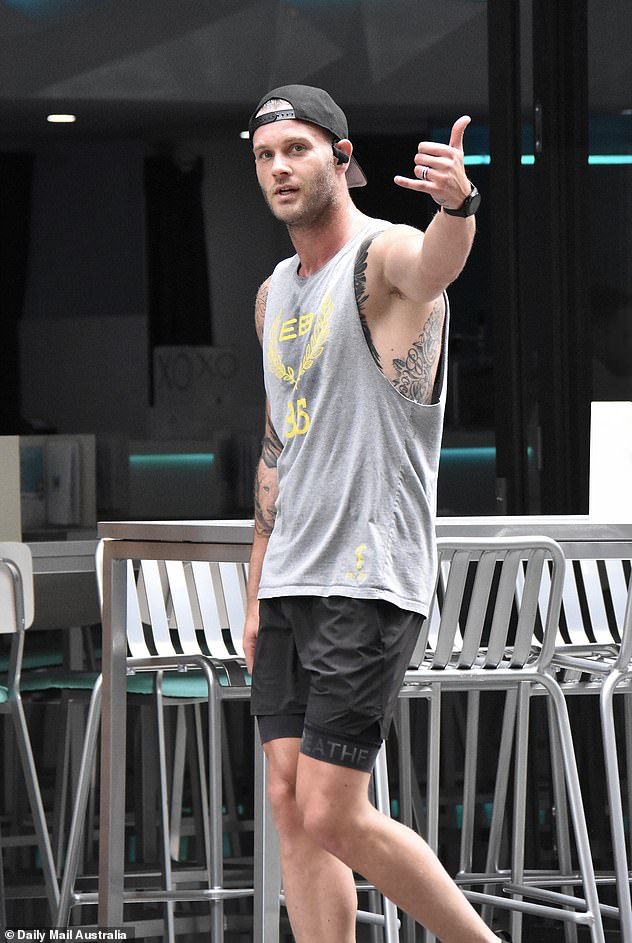 Friendly: You were almost guaranteed to spot him picking up his double espresso shot from the nearby cafe every morning or coming back from a jog. Jake pictured in November 2020

Keeping coy, Jake said it was packed away in his suitcase and was keeping it safe.

Later that night, Jake’s business partners were coincidentally in Sydney and were out celebrating a birthday.

I was already following them on Instagram and to my luck, they were sharing updates on their movements while tagging the name of the restaurant, so I headed on over. 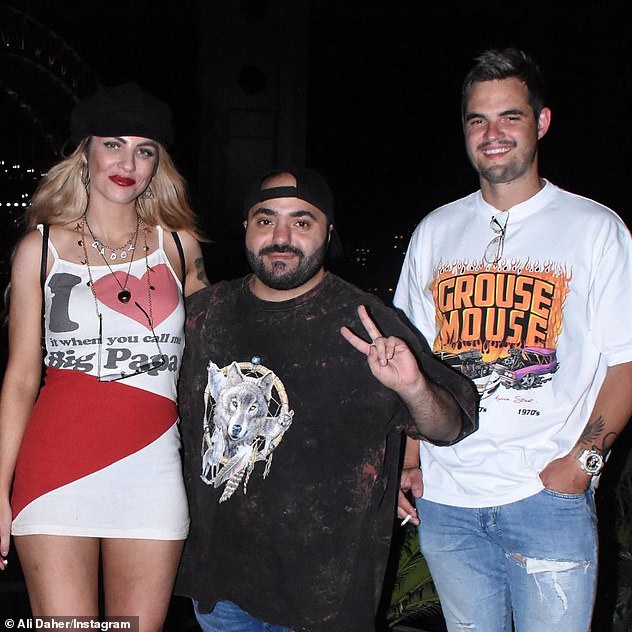 Lucky me! Jake’s business partners were coincidentally in Sydney and were out celebrating their birthday. Booka, Sam and Patrick were also in attendance 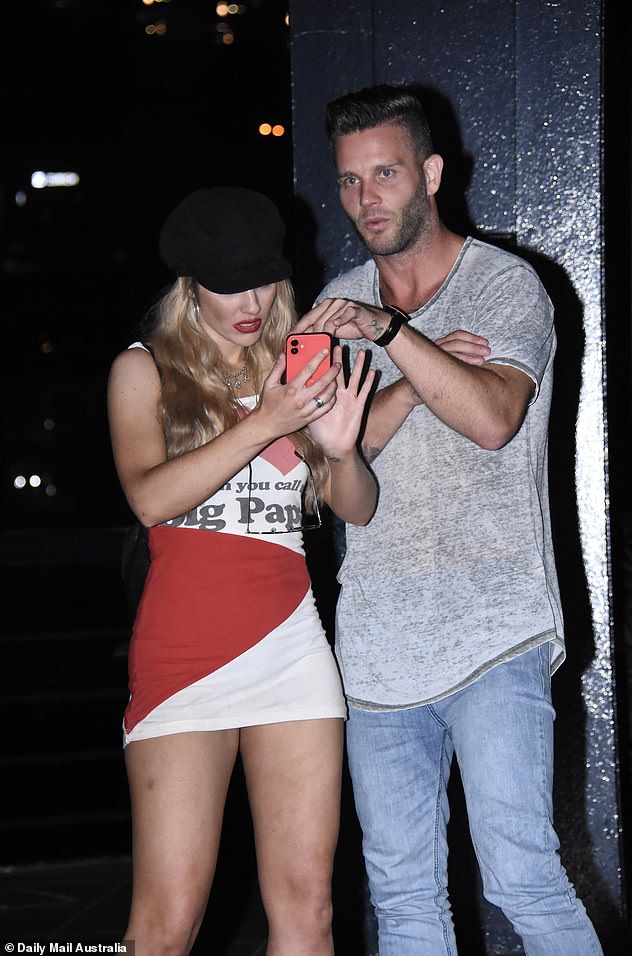 To my surprise, Jake had been joined at the restaurant by co-stars Booka, Sam Carraro and Patrick Dwyer.

We chatted as they came out of the restaurant regularly for cigarette breaks, as they cheekily posed for photos.

Hours, multiple meals and drinks later, all four exited the restaurant at 11pm and no-one was in the mood to call it a night. 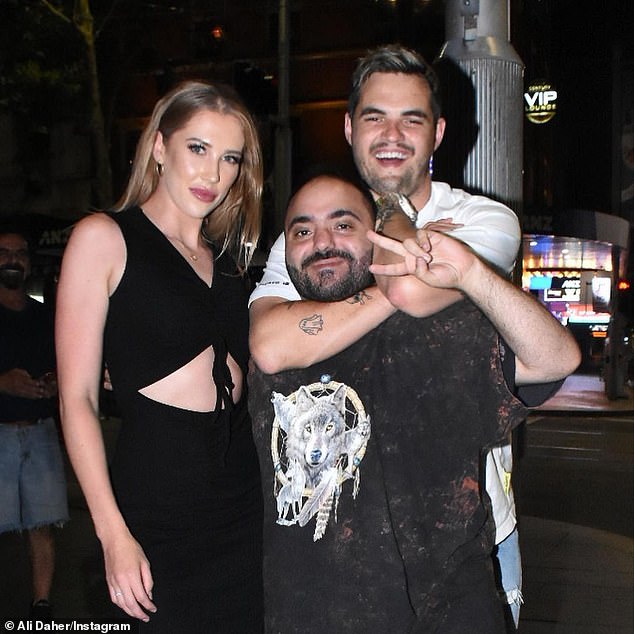 Ready to party! Hours, multiple meals and drinks later, all four participants exited the restaurant at 11pm very excited, and ready to continue their night 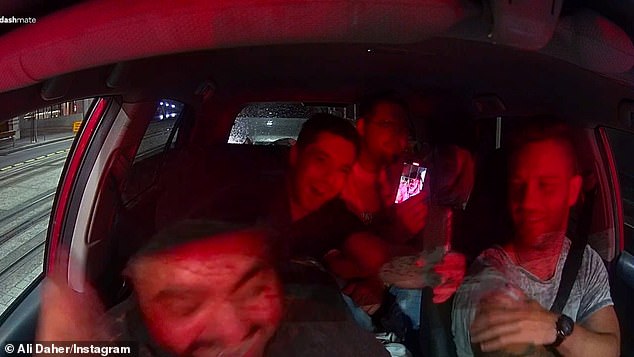 Need a ride? I cheekily then asked the group if they needed a ride before they got in

Standing at the top of the Overseas Passenger Terminal and almost 50 metres away from the road, the out-of-towners pondered where they could get a ride.

I suggested they walk down to the main street for a cab and cheekily asked ‘where are we going?’

The next destination was a few blocks away, so one of the grooms asked: ‘Have you got a car?’.

Unsure if I was joking, the group were still standing on the footpath when I pulled up and told them to ‘jump in’. 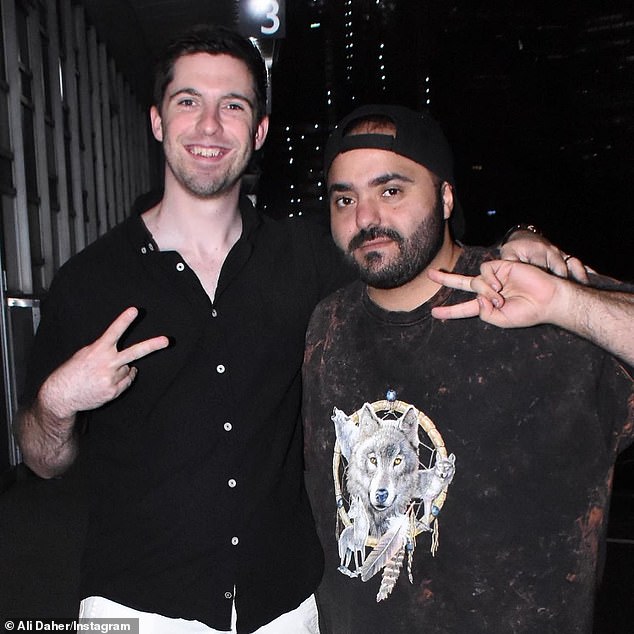 Belts on! Sitting in the back seat, Patrick was heard laughing: ‘[Sam] didn’t want to get in the car,’ before joking, ‘I’m an Uber. I didn’t see any cabs today.’ 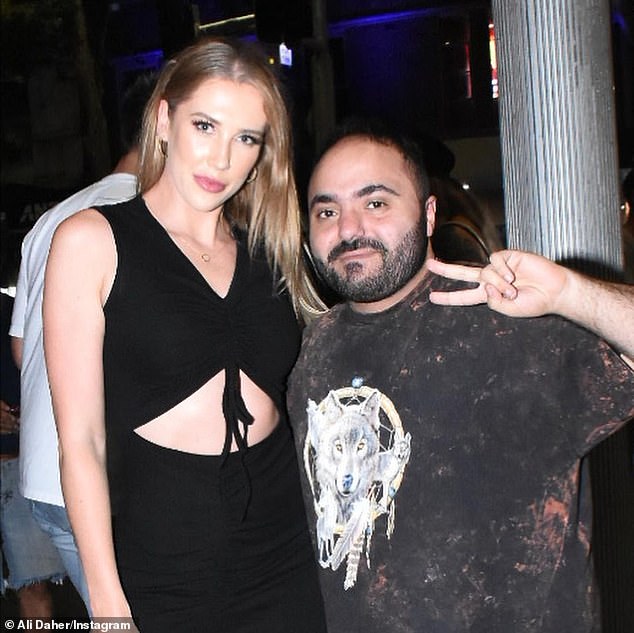 Upon entry into my car, the wild reality stars were instructed to put their seat belts on before they embarked on a 15-minute drive from Sydney’s Circular Quay to George Street. Pictured with Beck Zemek later in the night

They all managed to squeeze into my Toyota Corolla and we set off for an entertaining 15-minute drive from s Circular Quay to George Street.

The group joked about the rules they were breaking by being in a reporter’s car, after months of being warned by the show’s producers to keep away from the press.

‘This is the highlight of the f**king experiment,’ Sam joked, and a laughing Jake added ‘it’s f**king classic.’

Sitting in the back seat, Patrick was heard laughing: ‘(Sam) didn’t want to get in the car,’ before joking, ‘I’m an Uber. I didn’t see any cabs today.’

The reality stars then flipped roles on this reporter by asking me some questions, including who my favourite cast member is.

‘Obviously Jake, Patrick…’ I began before Sam called out ‘don’t leave me hanging!’

‘Sam I loved you until you blocked me on Instagram,’ I replied, which sparked a laugh at his expense from fellow cast members. 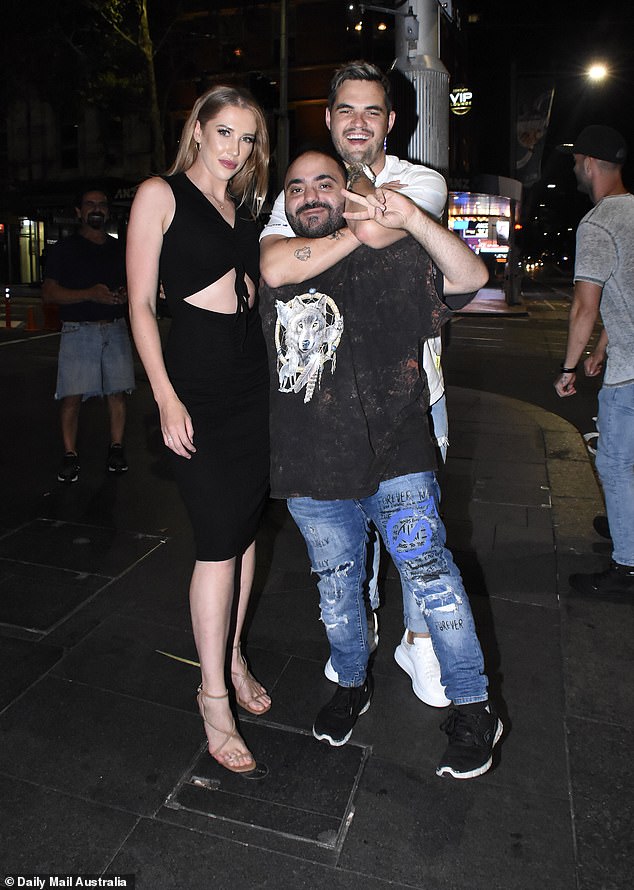 During the drive, I was asked who my favourite cast member from the show was, Naturally I replied, ‘Obviously Jake, Patrick…’ before Sam called out to say, ‘Don’t leave me hanging’

A few hours, and presumably several drinks later, one of the cast members was refused entry to a bar.

Heated words were exchanged between the offended groom and a security guard before another cast member decided it was time to call it a night and asked if I could drive him back to his hotel.

I felt responsible to get him back safe. 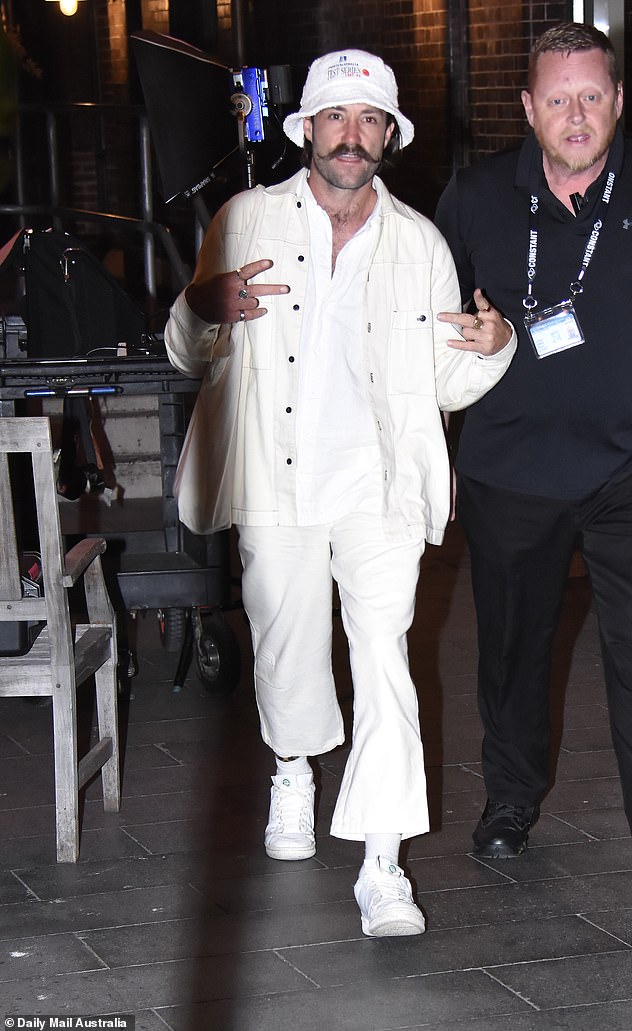 Friendly: Brett Helling appeared only too happy to be photographed leaving the reunion

Two days after my night out with the cast – day two of the reunion – I decided to get to Grounds of Alexandria a few hours early and get something to eat.

To my luck, the much-feared Married At First Sight boss – Tara McWilliams (aka Queen of MAFS) – parked her car right by mine.

‘I thought there wasn’t a better time to introduce myself, ‘The infamous Ali,’ she said.

Tara later asked if there was anything that she needed to be worried about, I replied ‘Not really,’ … she then thanked me for taking care of her ‘naughty’ cast. 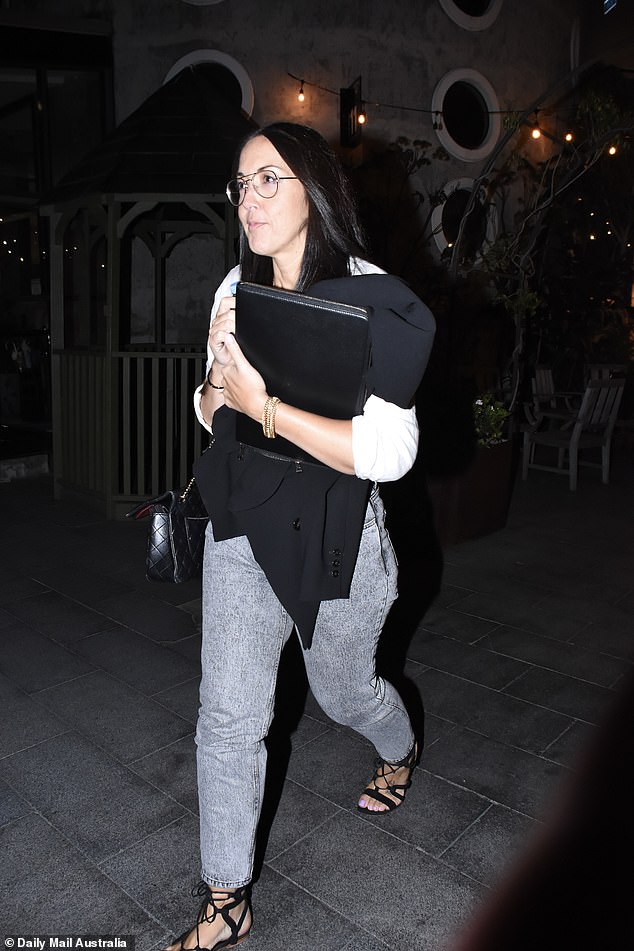 Chance encounter: To my luck, the much-feared Married At First Sight boss – Tara McWilliams (aka Queen of MAFS) – parked her car right by mine. ‘I thought there wasn’t a better time to introduce myself, ‘The infamous Ali,’ she said

A NIGHT TO BE REMEMBERED

Despite getting the cast into trouble with producers, it was a night to be remembered where cast members could briefly put aside life under the Married at First Sight microscope and forge friendships.

It was a rare opportunity to glimpse the true personalities of the cast outside ‘the experiment’ and not just the characters the rest of the country watched and judged.