Inside this four-bedroom at 8 Carrington Street in Canberra lies a pool, cabana and sunken bath

Inside architect’s brilliant one-of-a-kind industrial home – complete with a stylish swimming pool, a hotel-style sunken bathtub and a vacuum built into the WALLS

An architect has created a one-of-a-kind house in one of Canberra’s most sought-after suburbs.

Designed by Alessandro D’Ambrosio of local firm Arkitex in 2018, the two-storey at 8 Carrington Street in Deakin has won awards for its extraordinarily luxurious design – and it’s not hard to see why.

Fitted with gold marble and imported Turkish tiles, the opulent home has four bedrooms, four bathrooms, a heated outdoor swimming pool and hotel-style cabana, which looks more like a fixture of a Spanish resort than something you’d find in a backyard.

Standout features include a sunken bathtub flushed into the floor of the master ensuite and a ducted vacuum cleaner built into the walls, so the lucky owners need never lug a machine around again.

The two-storey at 8 Carrington Street in Deakin, Canberra, designed by local architect Alessandro D’Ambrosio in 2018 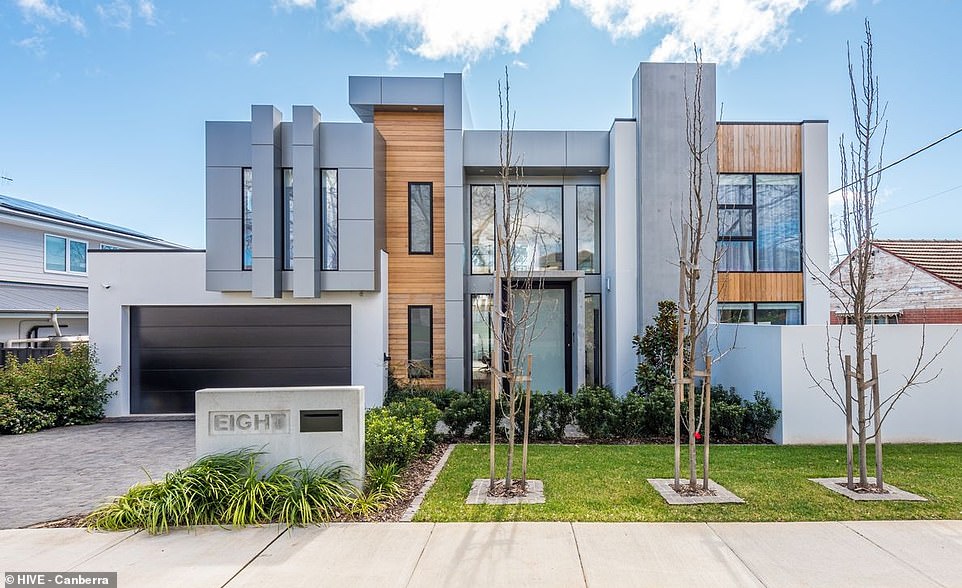 The one-of-a-kind house (pictured) has won awards for its extraordinarily luxurious design, with standout features including a heated outdoor swimming pool, hotel-style cabana and a sunken bathtub flushed into gold marble

The property, which is described as ‘old charm meets the pinnacle of modern design’, has a sprawling 293 square metre living space – 51 larger than the average floor space of a Canberra home which sat at 242.3sqm in 2018, according to figures from the Australian Bureau of Statistics.

It’s in auspicious company in a neighbourhood home to the Royal Australian Mint and ‘The Lodge’, the official residence of Prime Minister Scott Morrison, though neither rival the industrial luxury found inside 8 Carrington Street.

Spacious living rooms and a large chef’s kitchen are decorated in a sleek monochrome colour scheme, alongside polished concrete floors and premium appliances including a built-in fridge and washing machine.

Floor-to-ceiling windows are scattered throughout, flooding every corner with natural sunlight, as well as American oak floorboards which interrupt the black and white theme in the downstairs hallway. 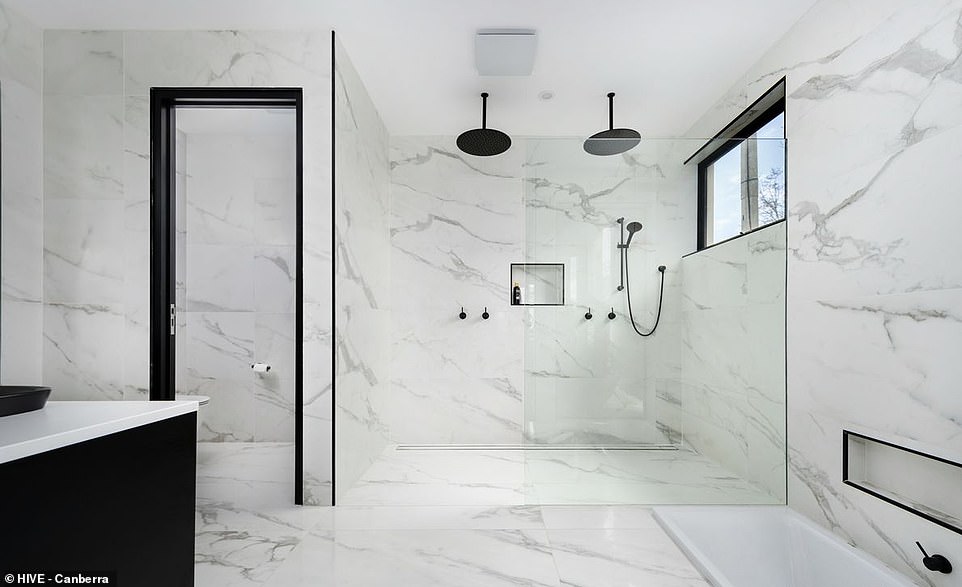 A sunken bathtub (bottom right) is flushed into the marble floor of the master bathroom, which is decorated in a sleek monochrome colour scheme that run throughout the house 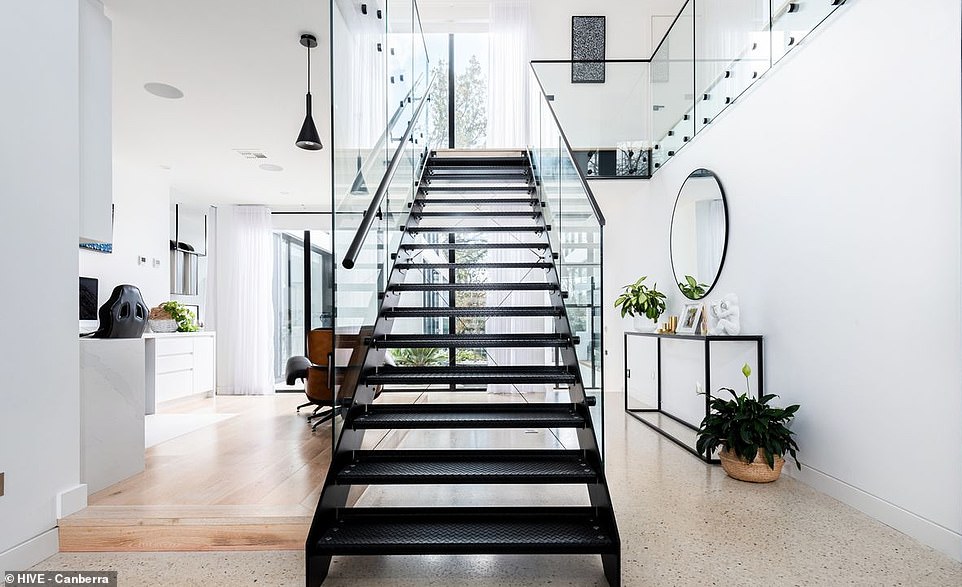 Floor-to-ceiling windows are scattered throughout, flooding every corner with natural sunlight

‘The house itself feels like something you would get in Melbourne or Sydney,’ he told realestate.com.au.

‘It has a lovely internal-external relationship, so there’s lots of big wide opening glass doors and lots of glass.’

Outside, the pool area is covered with imported Turkish tiles which stretch to the cabana on one side and a raised barbecue deck on the other. 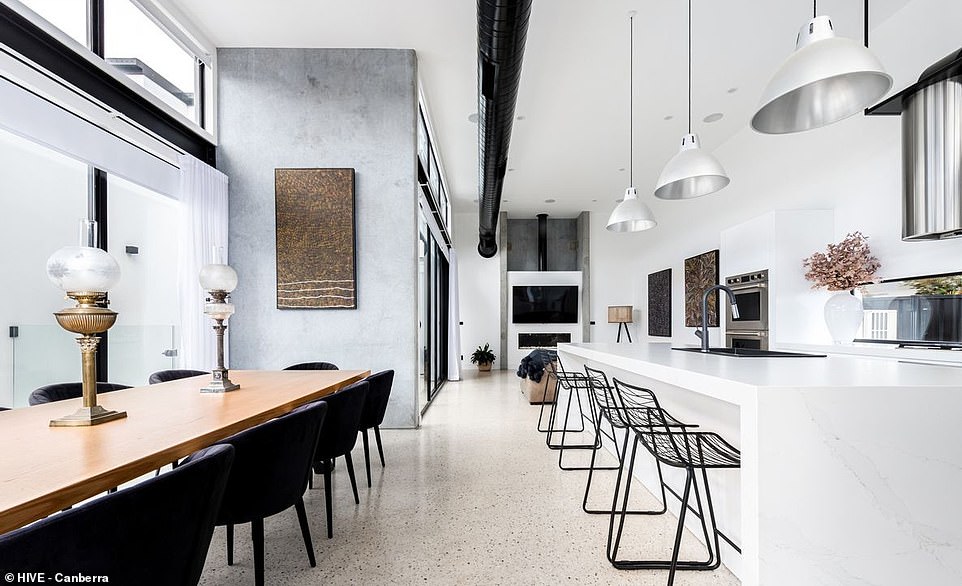 The house has been described as an unusual find in Canberra, with features more suited to properties in Sydney or Melbourne 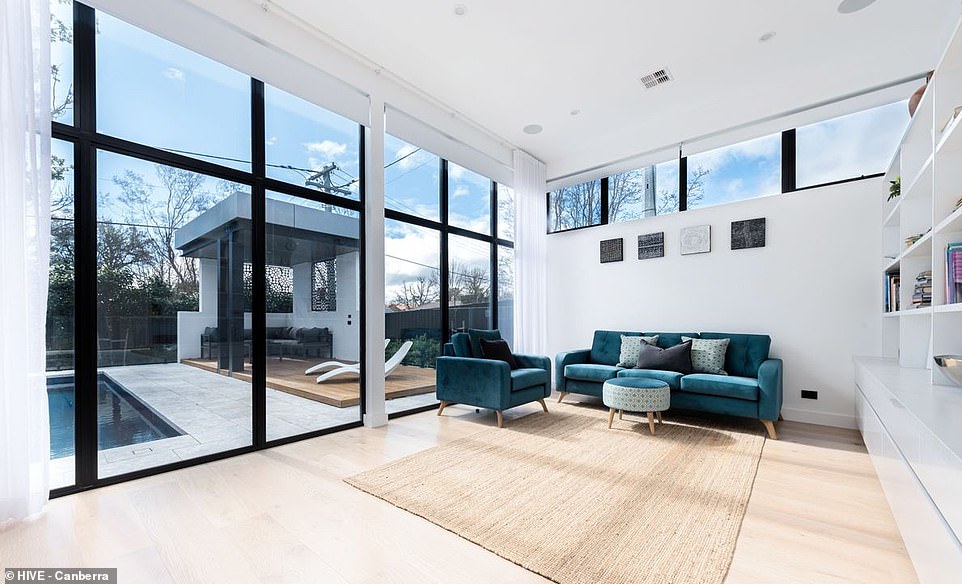 ‘Not only has [the house] been designed with this lovely indoor-outdoor feel, but the finishes are consistent and high-end even when you’re sitting out in the backyard. It’s pretty special,’ Mr Shipard said.

That investment in quality was recognised when the house won the 2019 Master Builder’s Award for the best use of materials.

The property was listed for private sale on Thursday, October 1, with viewings available on request.