Inside Victoria’s most contagious city where 16,000 residents are trapped in isolation

Supermarket giants are working furiously to feed a third of the population of a Victorian country town that has been trapped in Covid isolation for more than a week.

Shepparton, located on the floodplain of the Goulburn River in northern Victoria, on Friday remained a ghost town eight days after a Covid-19 outbreak was discovered, sending the entire state of Victoria into its sixth hard lockdown. 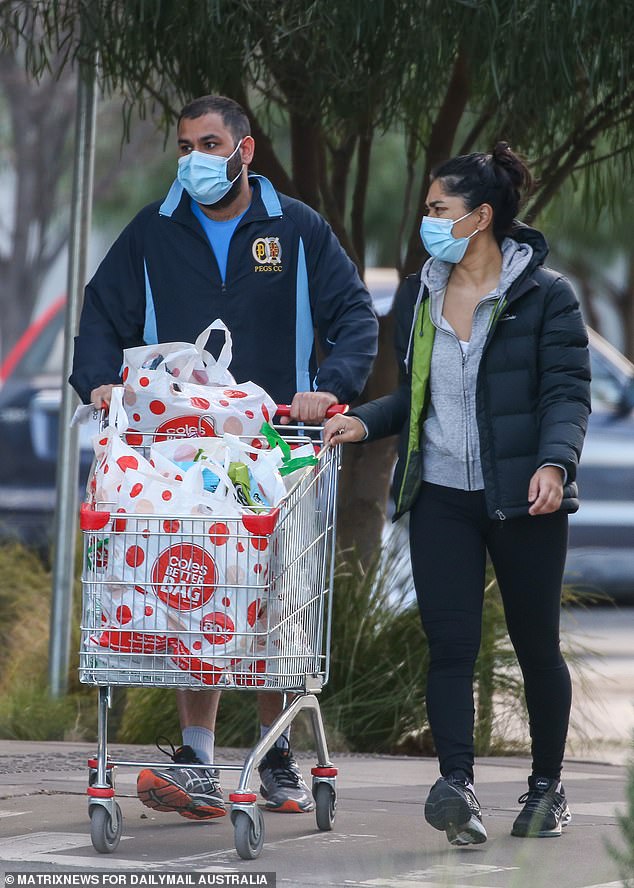 Those not ordered to isolate in Shepparton were finally able to get food on Friday. An outbreak of Covid there eight days ago locked down the entire state 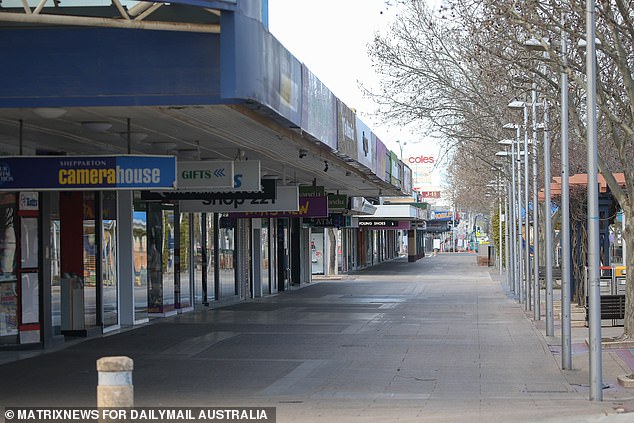 With a third of the town of Shepparton forced into isolation, the town remained a ghost town on Friday

With supermarket shelf stackers, suppliers and other staff all ordered to quarantine for 14 days, online orders for basic essentials skyrocketed.

On Friday, Coles Online reported it had increased capacity by 350 per cent, with the number of vans delivering orders up from two to seven.

Shepparton News, which is providing residents with near minute-to-minute updates on the Covid crisis, has reported a 630 per cent volume increase on the usual number of Coles Online orders being delivered to homes in Shepparton on Friday.

As the crisis threatened to spiral out of control just yesterday, food was being trucked in from as far away as Melbourne.

While shelves appeared well stocked on Friday morning, by midday supplies of basic essentials such as bread and milk were beginning to dwindle.

The town’s plight made national news on Thursday when reports emerged that some residents had not been able to obtain food for days.

So dire was the situation that the town was left vulnerable to something as basic as fire, with 24 of its 30 Country Fire Authority firefighters in isolation.

One welfare organisation delivered more than 250 help packages on Thursday, with businesses as far away as Echuca on the NSW border chipping into help. 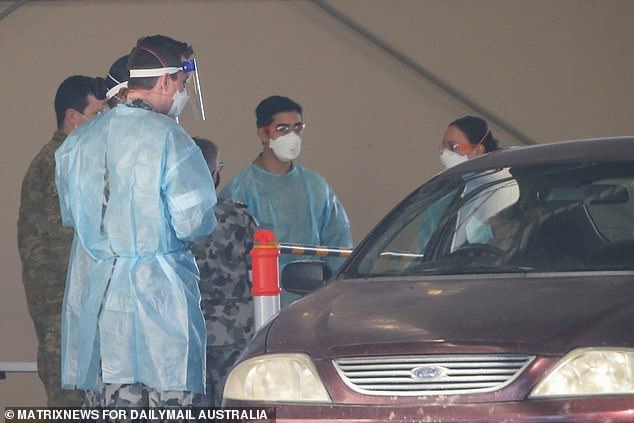 While thousands have already been tested in Shepparton, testing stations were relatively quiet on Friday 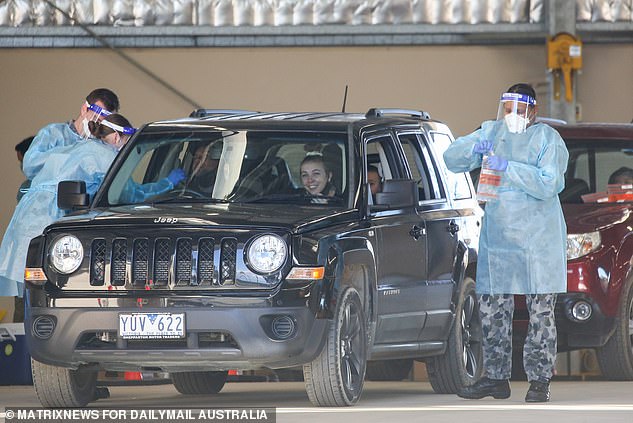 Shepparton residents line up for a coffee on Friday. Most of the town’s shops have been closed 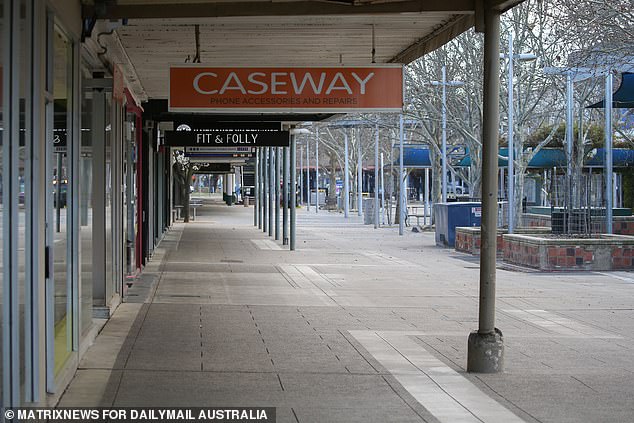 It was the day Victorian Premier Daniel Andrew dispatched the state’s deputy emergency management commissioner Deb Abbott, as well as other senior departmental officials, to Shepparton to co-ordinate relief.

Troops remain on the ground and on Friday could be seen going door-to-door backing up health officials as they checked to make sure the community was isolating as instructed.

About 70 ADF personnel will support testing and door-to-door checks over the next one-to-two weeks, with up to 25 members trained and deployed on Thursday afternoon.

About 16,000 residents in the region, which has a population of 65,000, are believed to be self-isolating, forcing the closure of food distributors, supermarkets and pharmacies due to staff shortages.

‘In the next 24 to 48 hours, I’m hopeful we might be able to see some of those exposure sites have their tier rating reclassified,’ he said on Friday. 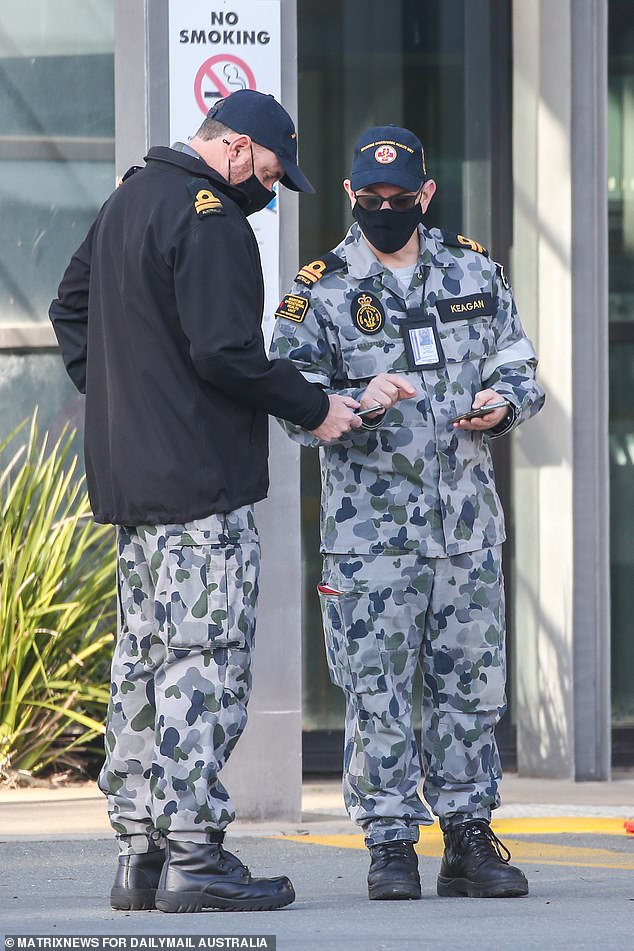 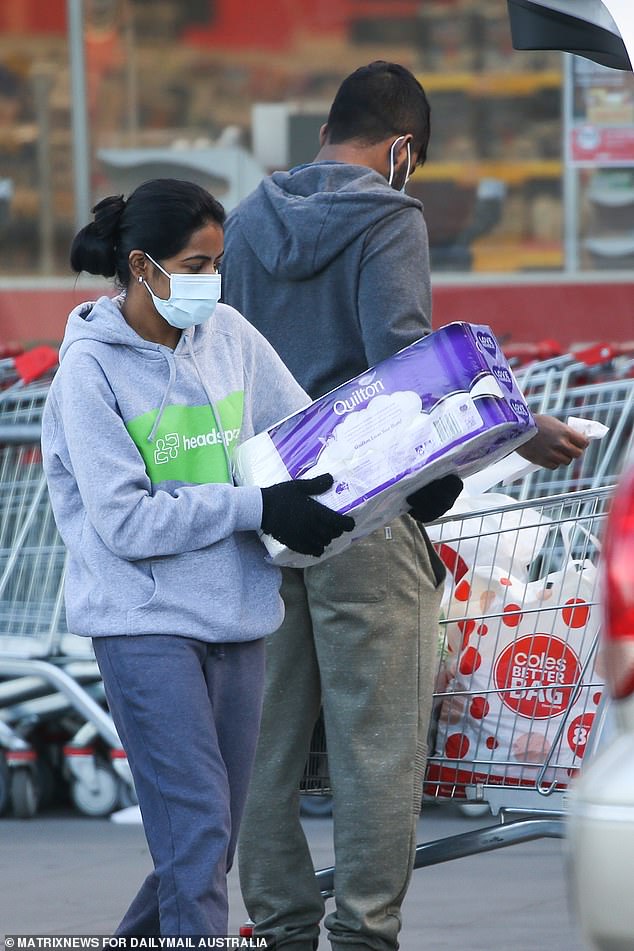 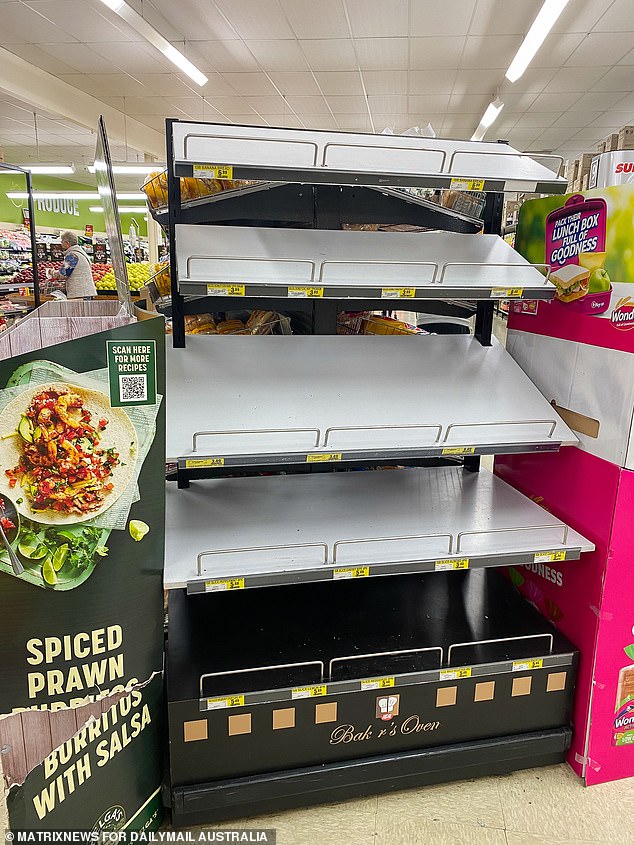 While spirits in Shepparton have been buoyed somewhat by the increased availability of basic supplies, tension threatens to boil over among the town’s large indigenous community.

More than 6,000 Aboriginal and Torres Strait Islander people in the Shepparton community.

On Friday, indigenous rapper Adam Briggs threw fuel on the fire when he openly called the town ‘racist’ after a front page article by the Shepparton News failed to represent a member of the indigenous population in an article aimed at promoting community support.

‘Shepparton has the largest Indigenous population in Victoria. How’s our representation on the front page of Todays paper?’ he posted to Twitter.

‘The town I grew up in is Racist AF.’

His comments stirred a flurry of anger from sections of Shepparton’s Aboriginal community, who rallied behind his comments.

The publication quickly apologised to Briggs and the indigenous community.

‘This is a good point and a reminder media organisations can always strive to be more diverse and representative of their communities,’ it wrote.

‘I understand Briggs was on our initial list of contacts to reach out to. It is disappointing he wasn’t in our paper today as such a valued member of our community.’ 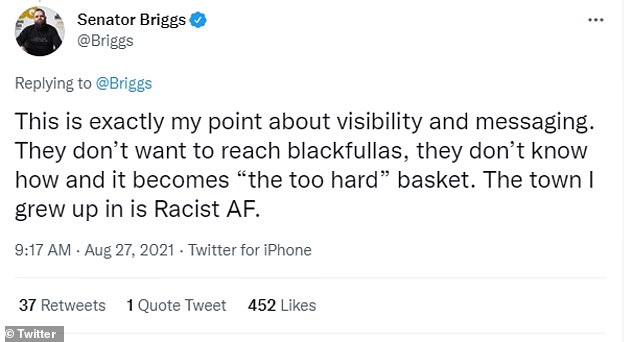 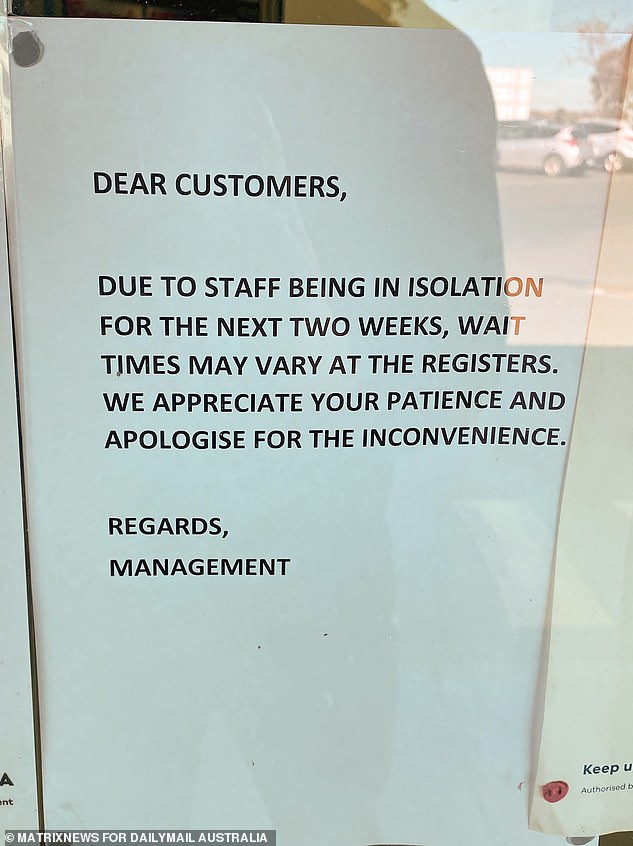 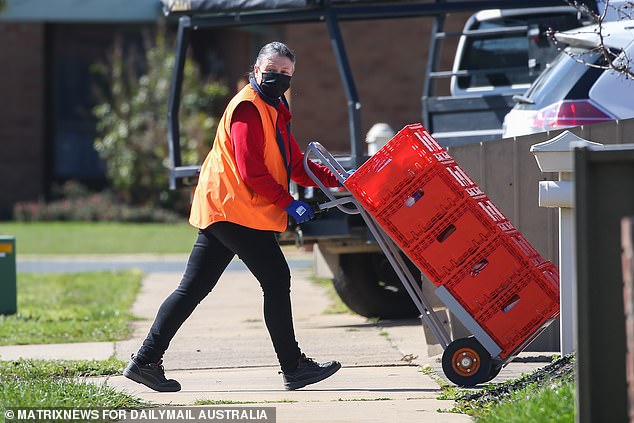 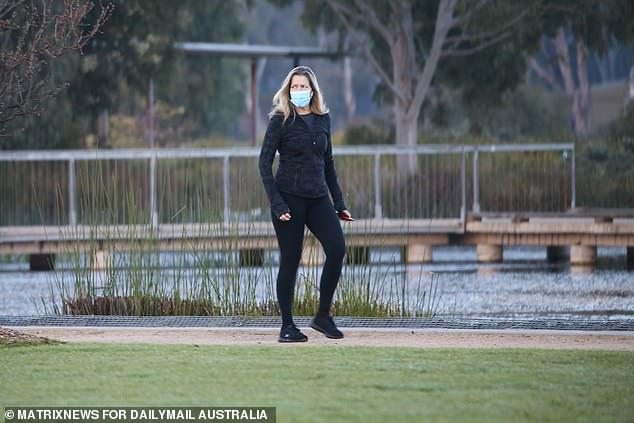 Others remain angry that they had been forced to isolate and effectively fend for themselves for days until relief arrived.

‘Great Scomo & Gladys can help by going and stocking the shelves at woolies for me and helping my team members while I’m safe at home under my Stop and Stay Order,’ one Shepparton woman posted to social media on Friday.

‘People of Shepparton might need more than messages,’ another wrote.

Addressing reporters on Friday, Covid commander Jeroen Weimar conceded the spread of the virus throughout Shepparton had caught health officials off guard.

The town had gone almost a year without recording a single active case of the virus until this month.

‘We think we have good control and support around our contact tracing and response in Shepparton but it shows you how quickly these clusters can blow up in a short period of time,’ he said. 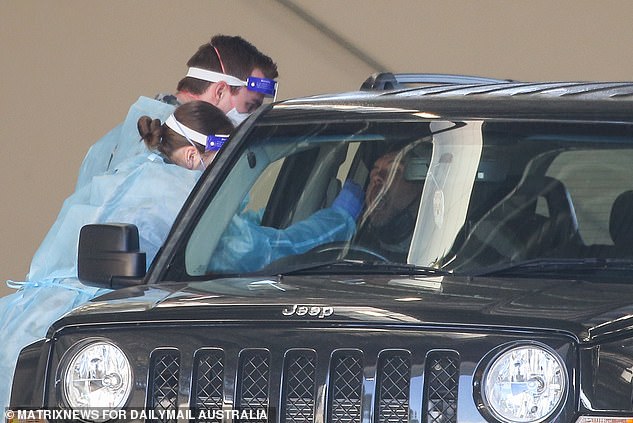 ADF staff test a Shepparton man for Covid-19 on Friday 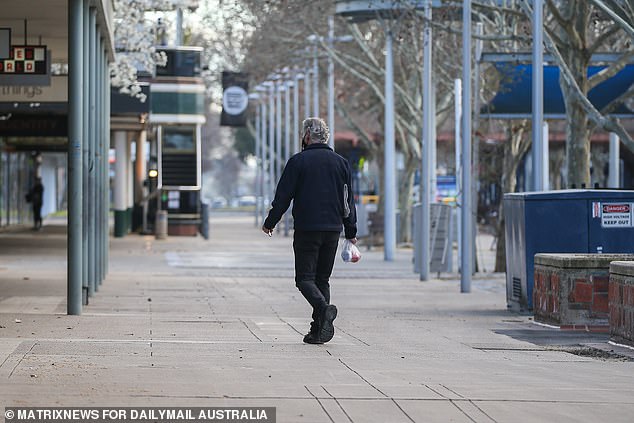 He praised locals for their response to the crisis, with three quarters of 6000 primary close contacts having returned negative test results and continuing with their isolation.

Several exposure sites have also been reviewed with some downgraded, including a primary school.

About 500 primary close contacts are expected to be released from isolation on Friday when they complete a negative test result.

‘We know of course how hard it is to isolate, particularly when so many people in the town are isolating at this point in time and I think in particular to the various local and statewide support services that are now working so hard to keep the Shepparton community safe and supported at this very difficult time,’ Mr Weimar said.

Goulburn Valley Health, in partnership with the Victorian Government and the Greater Shepparton City Council, will hold another online community information session tonight between 6pm and 7pm.

The forum will address the current situation in Greater Shepparton and emergency relief available to families and individuals.