An Instagram blogger has quit the app amid claims she is exploiting her children for financial gain.

Clemmie Hooper, 33, has been accused of posting ‘ethically dubious’ pictures and stories of family life to her 500,000 followers.

The midwife, who works one day a week, shot to Insta-fame for her musings on being a parent of four under her online personna ‘Mother of Daughters’.

But she has now vanished from the social network without comment amid rows she uses her children to sell advertising.

Insta-perfect: Clemmie Hooper gained followers on Instagram for giving a snap shot into family life as a mother-of-four

In a heated discussion on parenting message board Mumsnet, she told users she ‘didn’t feel’ she sold her children to make money. 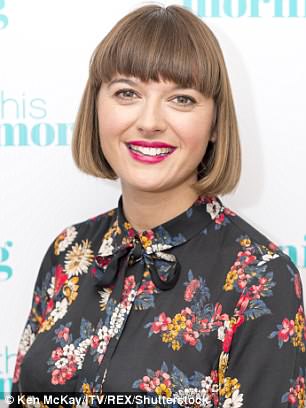 The Telegraph reports she said:’I don’t feel I ‘sell’ my children to make money, I actually hardly ever feature the older girls and have changed my approach when working with brands. I won’t feature a picture of my children alone for an AD and I always ask “do they need to be in the post at all?”‘

Using the name ‘anyalovesrose’ she added: ‘I said I hardly ever feature them. They also see and give consent to any post where there are in the picture.’

But users replied saying that it was ‘morally wrong’ and as children they were not able to give consent or understand what it meant.

Almost 470,000 people followed her Instagram page which followed the trials and tribulations of being a mother to daughters Anya, Marnie, Ottillie and Delliah, aged between two and 10.

Her husband Simon, who posts under the name ‘Father of Daughters’ and has almost 850,0000 followers on Instagram, also regularly posts images of the family including advertising.

The couple made the most of their online popularity by writing three books on parenting and working with brands like Renault and Visit Florida for sponsorship deals.

Her husband Simon, who posts under the name ‘Father of Daughters’ and has almost 850,0000 followers on Instagram, also regularly posts images of the family including advertising

But it hasn’t all been smooth sailing with Mrs Hooper becoming caught up in a bullying row after her followers turned on a woman who called Hooper a ‘hypocrite’ on the social networking platform.

And some followers have turned on Mrs Hooper, by suggesting she has been reported for breaches of the Nursing and Midwifery Council’s social media rules.

The Telegraph reports her employer King College Hospital said it has not received any complaints of this nature.

Mrs Hooper has also repeatedly had to defend her decision to feature her young children in posts online.

Fans of her account have now been calling for her to return, by leaving messages beneath her husband’s posts.

One person pleaded with her to ‘ignore the bullying’. Another said: ‘People still can’t handle someone being a mother and a professional, and a person in their own right.’