An Instagram model who is ‘so beautiful’ people think she’s a catfish has now hit back at trolls – saying life is ‘harder for beautiful people’.

Veronika Rajek, 25, from Slovakia, claims that her Instagram profile constantly gets deleted because followers report her for being fake, because she’s ‘too pretty’ to exist.

Others allegedly bully the former Miss Slovakia 2016 finalist for having had plastic surgery, which she insists isn’t true.

‘People don’t even believe I exist,’ Veronika said. ‘It’s pretty discriminatory that other women can do the same thing as me and I can’t, and I just get deleted because of my looks.

‘I call myself an alien as people don’t believe I’m real. They think I’m an AI robot or a catfish online.

‘People say beautiful people have it easy but I have it worse as people make it harder for me because I’m beautiful.’

Veronika Rajek, 25, from Slovakia, claims that her Instagram profile constantly gets deleted because followers report her for being fake, because she’s ‘too pretty’ to exist 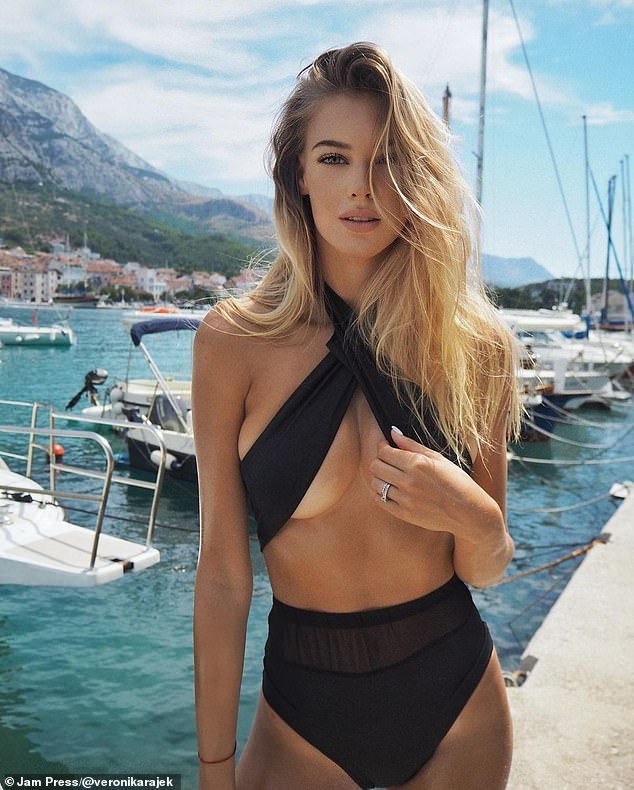 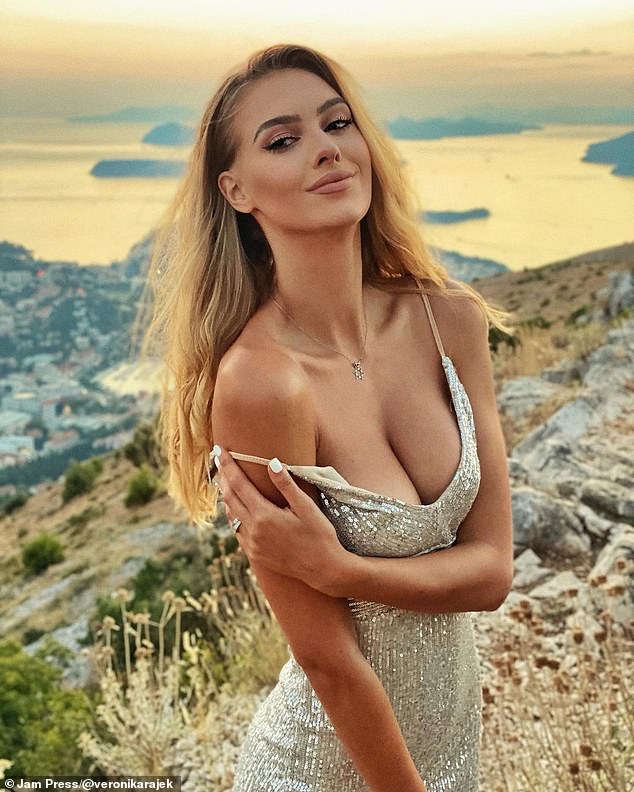 Veronika insists that she doesn’t edit her social media snaps to look different, aside from using a ‘normal’ skin smoothing tool

The model, based in Vienna, Austria, travels the world making content for her Instagram – and claims people are ‘always surprised’ when they meet her for the first time.

The former Miss Slovakia 2016 finalist claims she receives hundreds of messages from women body shaming her on a regular basis and that many claim she uses filters to advance her looks.

Veronika, who has 1.1 million followers on Instagram (@veronikarajek), said: ‘I get messages from men who don’t think I’m real but the worst messages on my Instagram are from women asking me why I’m pretending and asking for proof.

‘I don’t make any adjustments, shaping or filters – I use a skin smoothing tool but I think that’s normal. 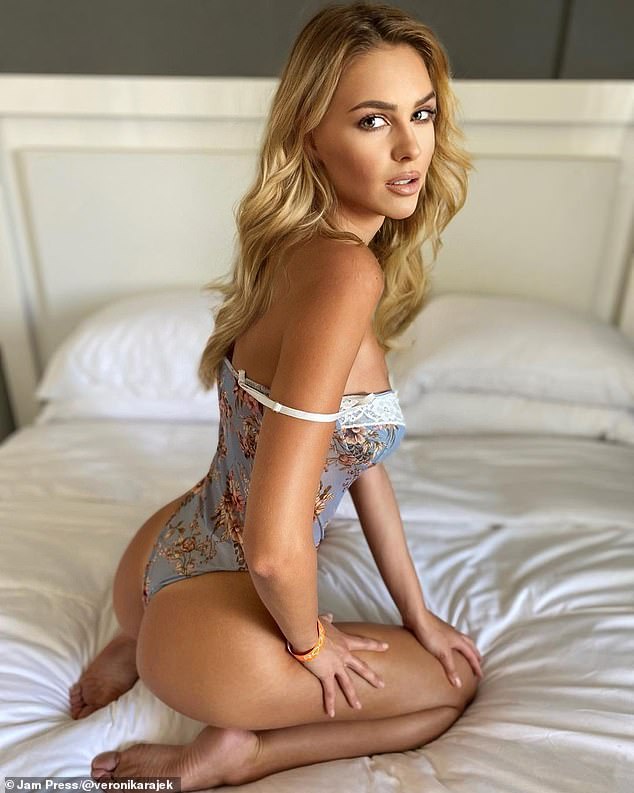 The model admitted that she doesn’t have lots of friends, and said that her life is made harder by other people because of her good looks 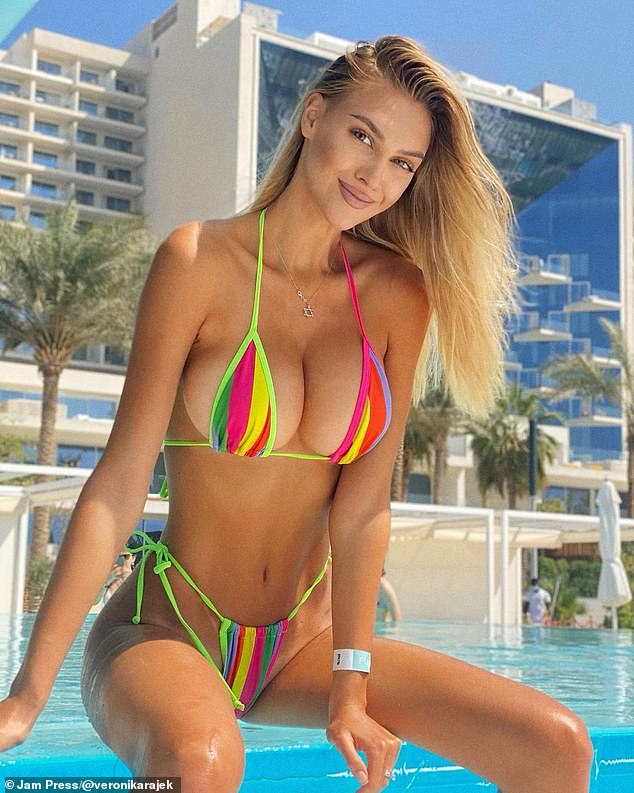 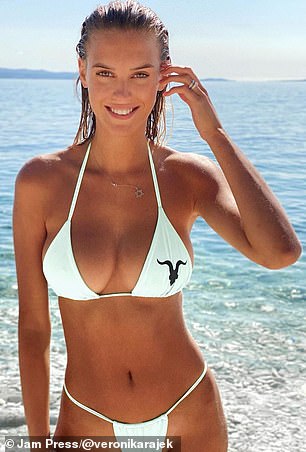 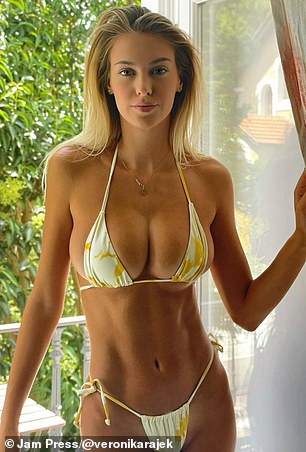 The content creatore said that while some people are body-shamed for being too big or small, she is shamed for not being ‘natural’. To maintain her figure she works out five times a week and doesn’t drink or party

‘Skinny girls are body shaming plus-sized models but I’m being body shamed too as they don’t think I’m natural.

‘I get more abuse from women as they are jealous and they think I want their boyfriend.

‘Only women can hurt other women so strongly. 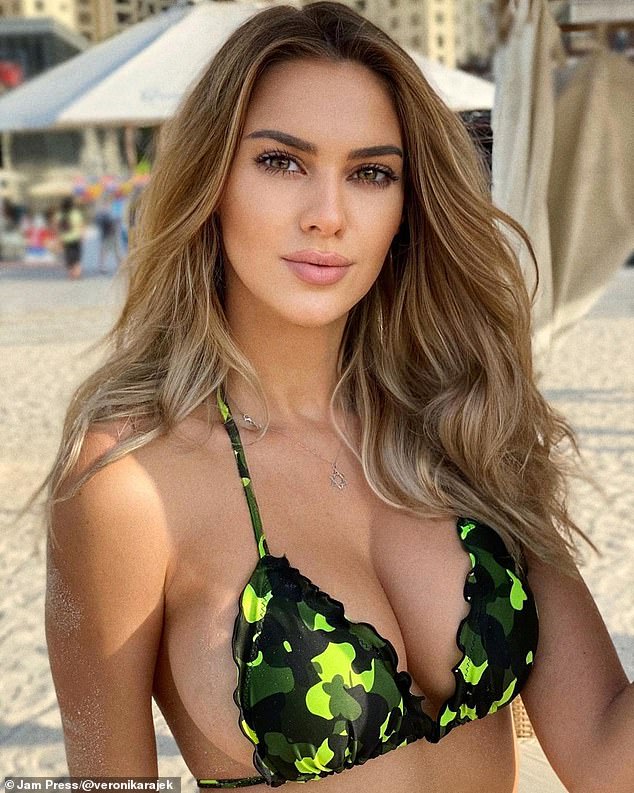 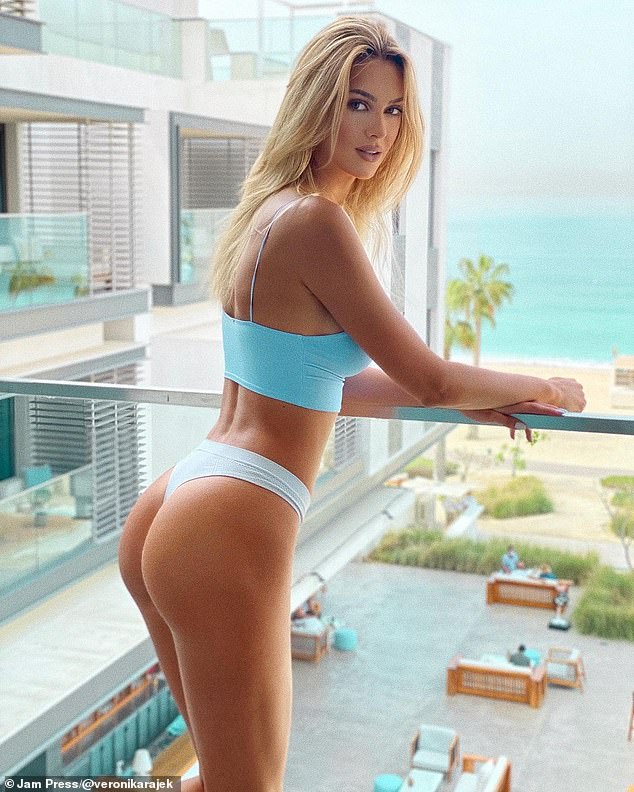 Veronika, who awas previously crowned Miss Slovakia, said that it’s other women who make her life harder by constantly questioning her looks 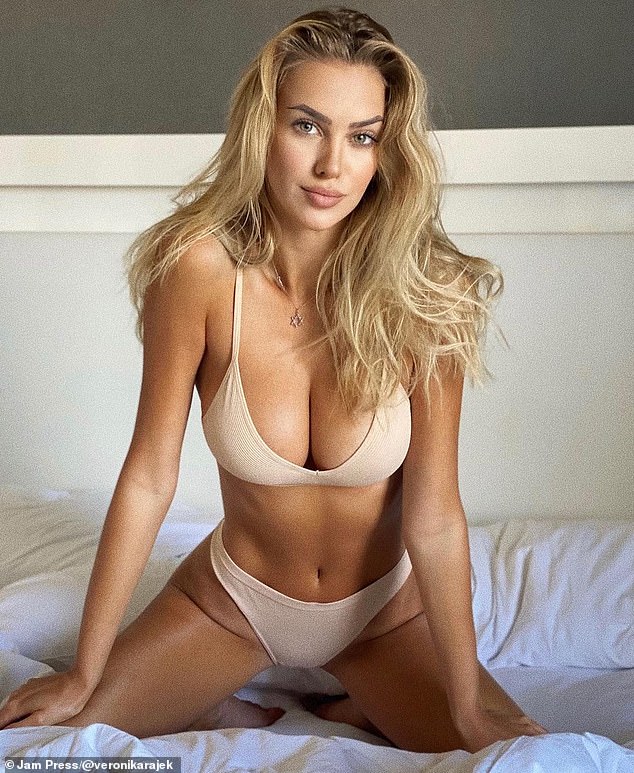 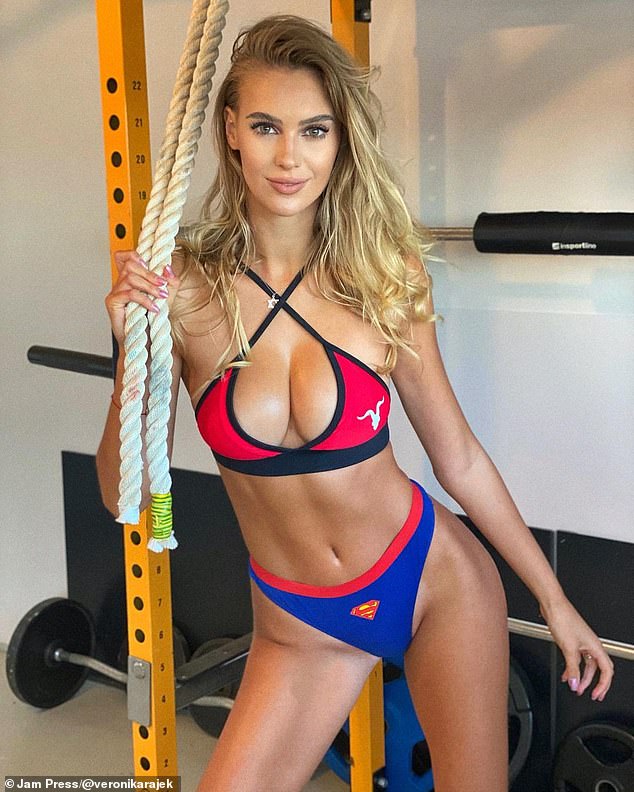 ‘People say beautiful people have it easy but I have it worse as people make it harder for me because I’m beautiful,’ Veronika claimed

‘I don’t think I’m perfect but I’m natural in real life. But people are scared of me and don’t want to talk to me.’

To end the rumours of plastic surgery and claims she’s a catfish or robot, Veronika has now resorted to desperate measures – getting a scan of her breasts to prove people wrong.

The model, who is a 36D cup in most lingerie brands, paid £75 for a breast examination while in Dubai in October, which included a quick scan.

She said: ‘I was forced to do this check-up to get people to believe me. 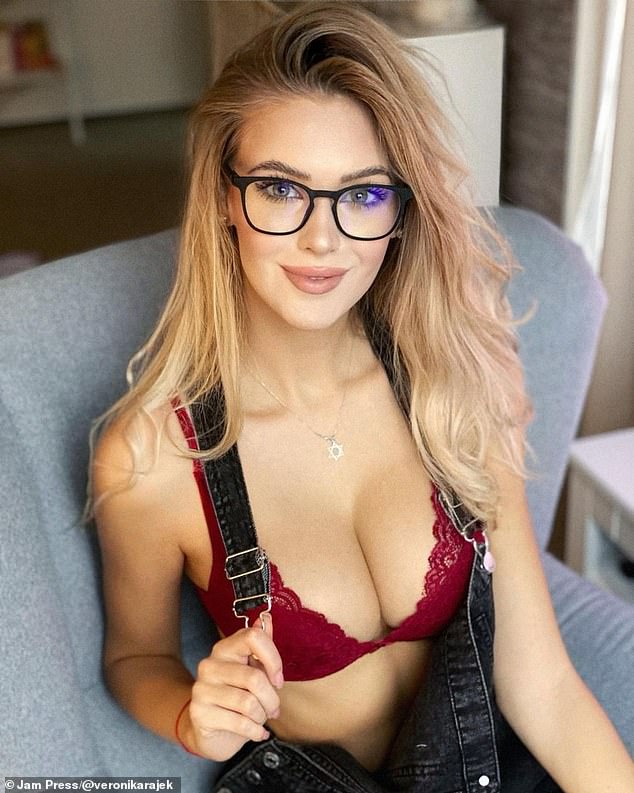 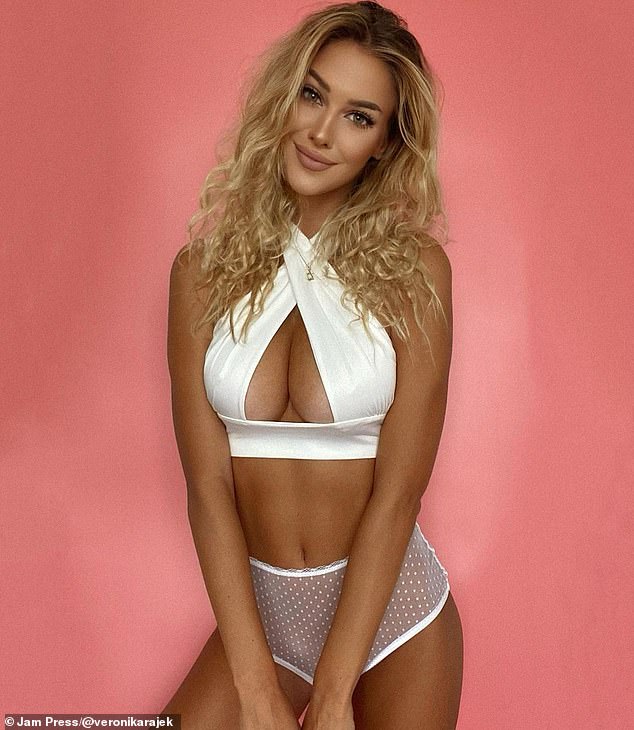 ‘People question if my breasts are natural so I went to a doctor to get a breast examination and proof that they’re real, with no enhancements, objects or scars.

‘My doctor was really surprised because she thought I’d had surgery too and said I had the most beautiful natural breasts.

‘I worked out so much at teenage years that I developed muscles which make my breasts a nice shape.

‘I’m not trying to be sexual, I just have big boobs. 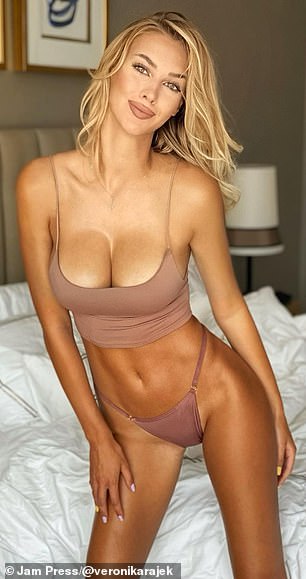 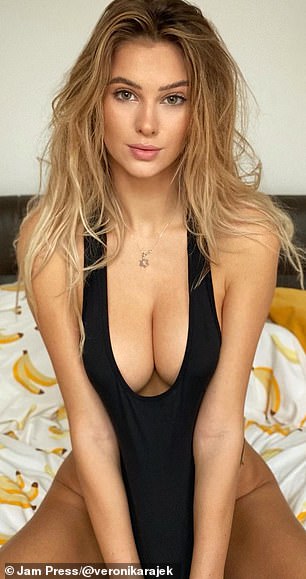 Veronika insists she’s not trying to create a sexual persona, but has naturally big boobs. People assume she’s had plastic surgery, and she claimed that even a doctor couldn’t believe her curves were natural 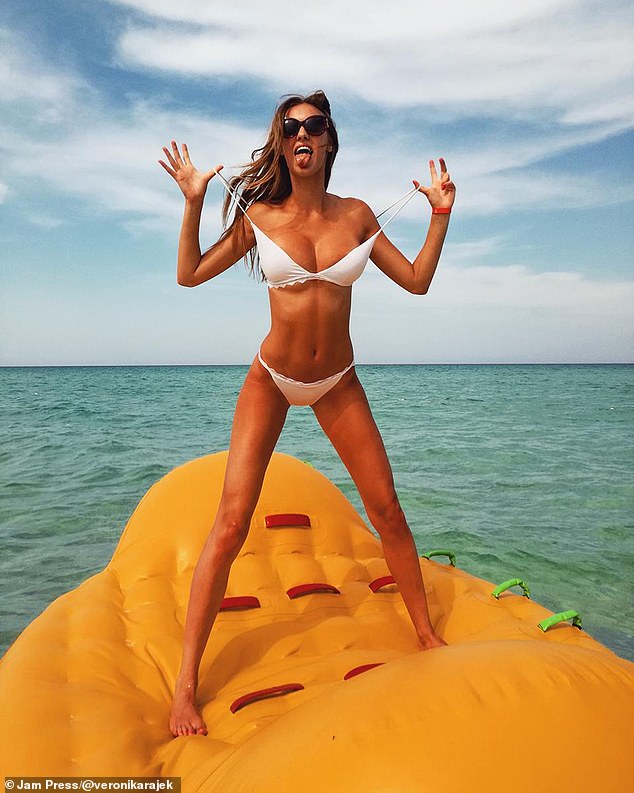 Veronika, who has 1.1 million followers on Instagram said that she prizes her confidence and believes that it’s self-esteem that makes you beautiful

‘God gave me these gifts and I want people to believe me.’

But God’s gift actually developed late for Veronika, who has been modelling since she was 14.

In school, she was often called a ‘desk’ or ‘giraffe’ for being flat-chested.

‘They were always making jokes that I was a giraffe with no breasts.’ 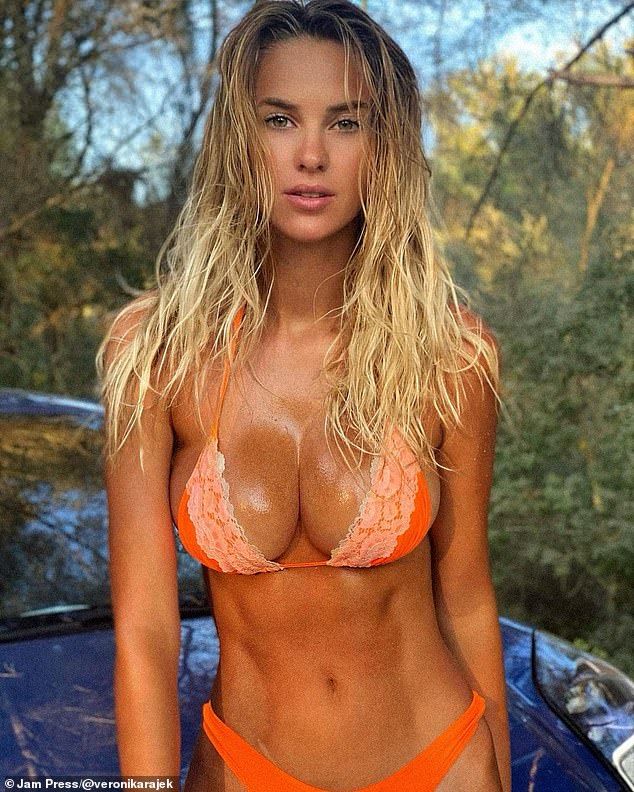 Veronika takes good care of her body – the model doesn’t drink or party, and works out five times a week, sharing fitness routines and saucy snaps on Instagram.

But her beauty has also come at a price.

She added: ‘I don’t have many friends, but I feel good.

‘If you feel beautiful the way you are, then you are beautiful. If you feel confident in your body and you are plus-sized, then just be confident.

‘If you have had plastic surgery, just be honest. If you take care of yourself, you can be beautiful too.’