A furious mum has blasted Instagram for removing a photograph of her 12-year-old son who has a facial deformity – after another user complained about the image.

Harry Beswick was born with Goldenhar syndrome, which means he has no left eye, eye socket, nostril and left ear.

Mum Charlie, 38, from Stoke-on-Trent regularly posts pictures of Harry and his twin brother Oliver to 12,000 followers on her Instagram account, called Our Altered Life.

Harry has a prosthetic eye, but when Charlie posted a picture of him without his eye on Sunday, the picture was taken down two days later after after an anonymous user reported it to Instagram’s content moderation team.

Charlie complained about the decision on her Twitter account, which has been re-tweeted more than 46,000 times and after dozens of people contacted Instagram to express outrage, the photo was restored at 7pm on Tuesday.

An Instagram spokeswoman said: ‘We mistakenly removed the photo, but quickly restored it as soon as the mistake was brought to our attention. We have apologised to the family.’

The mother-of-two also has to contend with trolls who post hateful comments about her son, referring to him as an ‘abomination’ and a ‘monster’.

Charlie Beswick, 38, with her son Harry Beswick (who has Goldenhar syndrome) was outraged after Instagram removed her son’s picture when another user reported it to moderators 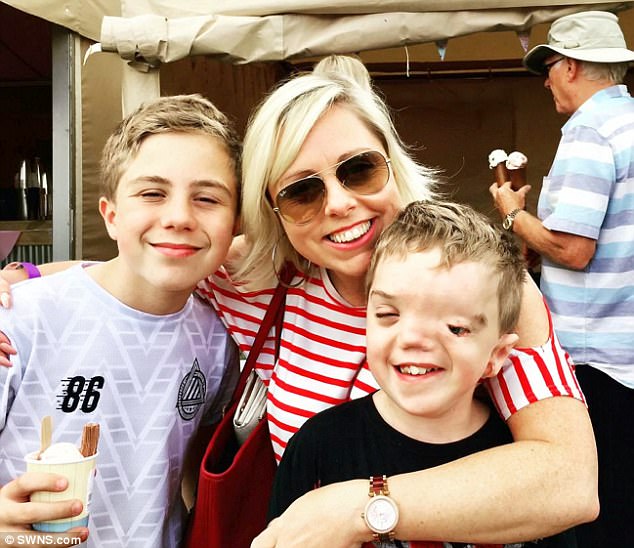 But part-time supply teacher Charlie says she has not received an apology from Instagram – and claims it not the first time her pictures were taken down.

Charlie said: ‘Instagram haven’t apologised – they’ve restored the photograph but not explained why it was removed in first place or apologised.

‘It really upset me to have my child’s face taken off the platform and that it contravened some sort of guidelines.

‘I have 11,700 followers and it’s a really lovely community.

Goldenhar Syndrome is the name given to a range of bone abnormalities that affect the face and sometimes the vertebrae.

The main features are under development of complete lack of one ear and underdevelopment of the jaw and cheek on the same side of the face.

Other problems may include a cleft lip and or palate, skin tags and fused spinal vertebrae.

‘On the picture I had 2,300 likes, over 200 comments – all really nice supportive comments.

‘Had they taken 30 seconds to look at the image they would see it was really well received and a high engagement post for them.

‘I felt quite offended, quite confused.’

Charlie said that while the page attracts trolls, who have heartlessly described Harry as an ‘abomination’ and ‘monster’, the positive comments outweigh the negative.

She said: ‘We do get trolls and I’m quite thick skinned, I do a lot of policing on Instagram.

‘I get in there first for negative comments.

‘I’m very hot on the comments, I delete or report anything really quickly.

‘You get people telling me I should kill him with fire, he’s an abomination, a monster, freak, alien. 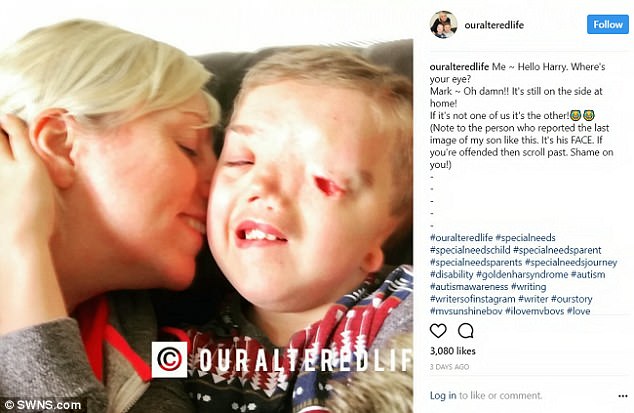 Charlie has hit back at the person who was ‘offended’ by her picture of Harry and was backed up by 46,000 Twitter followers 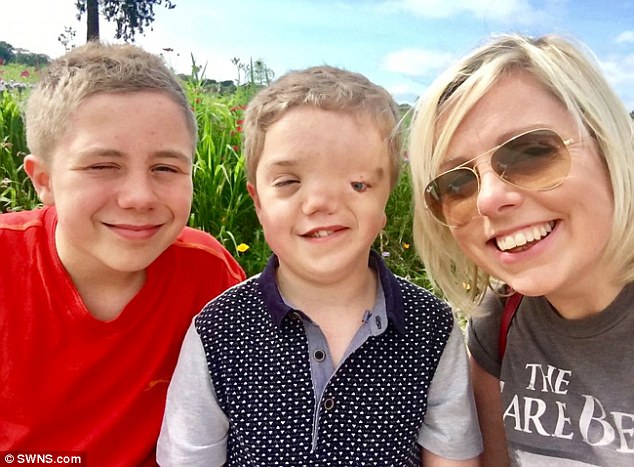 Charlie Beswick with her twins Oliver and Harry, who has no left eye, eye socket, nostril or left ear

‘People asking if they could put their bodily parts on different parts of my son’s face, which I find extremely offensive.

‘Real weirdos, kids trying to wind me up, and more hard core weirdos that will email and when I block them, set up other accounts to continue to send me abuse.

‘But for every one of them there is two to three hundred incredibly supportive comments. It’s few and far between.’

Harry goes to a special school because of his autism and suffers from global learning delay, meaning his cognitive and physical development is much slower that others.

He is non-verbal, meaning he cannot hold a conversation and is functioning at around two and a half years old rather than 12. 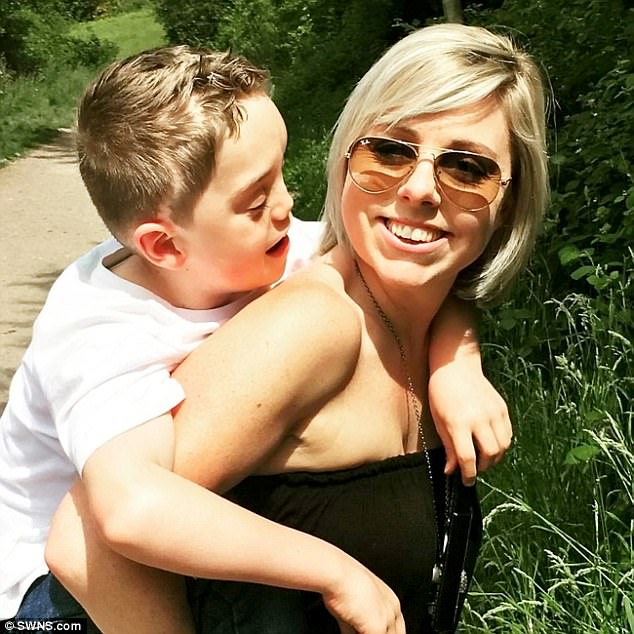 He has had surgery to create his missing eye sockets and wears a prosthetic ear.

Charlie said: ‘Goldenhar syndrome is an umbrella term for craniofacial and spinal abnormalities.

‘His spine is unaffected, his mobility is fine.

‘But he is at the more severe end of the craniofacial cosmetic end so when he was born he had got no eye socket at all, no eye, no ear, no nostril and a short underdeveloped jaw as well.

‘This isn’t the first time Instagram have done this, it’s the second time they’ve taken an image off. 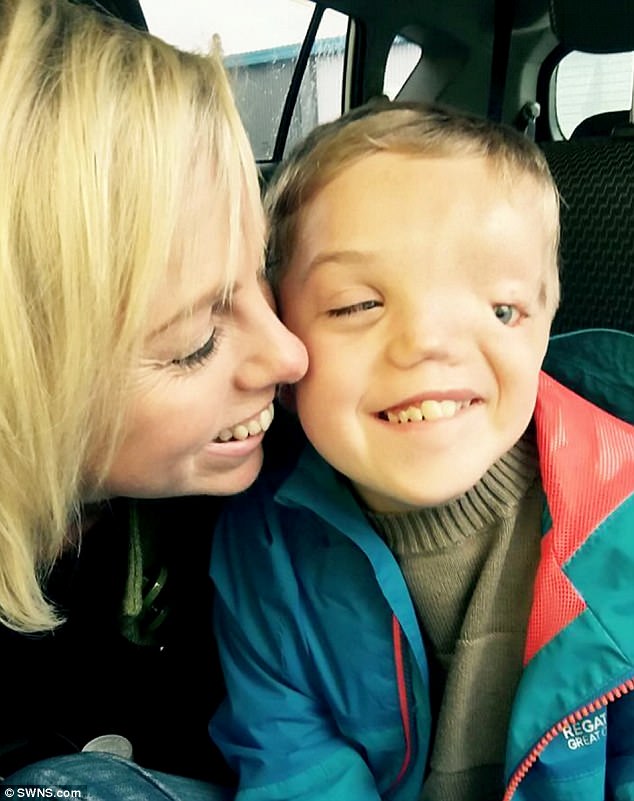 ‘Both times were when he didn’t have his prosthetic eye in – it’s specifically those pictures Instagram or someone is finding offensive.

‘He has had a lot of surgery to create those sockets so I’m proud to show it off.

‘It can be full on, peaks and troughs – if he has surgery or appointments it’s a busy time.

‘We have to take him to Alder Hey Children’s Hospital in Liverpool, about 50 miles from us. 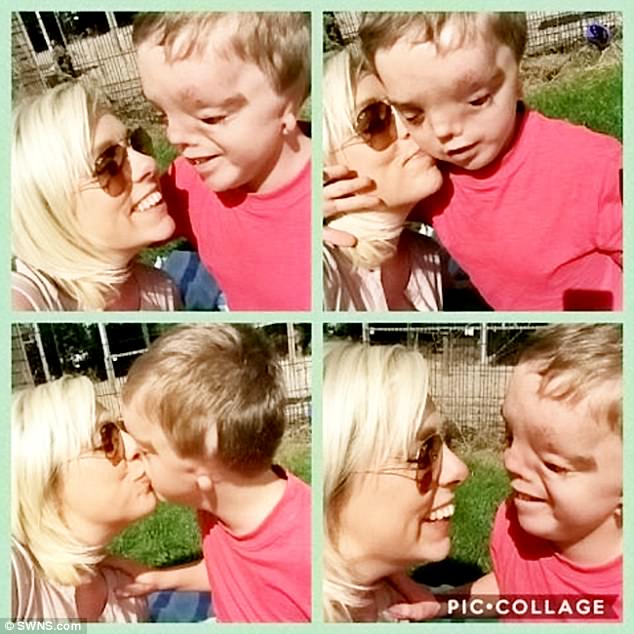 ‘I spend quite a bit of time there because local hospitals are not specialised enough to deal with his condition – but other than that he’s not a sickly child at all.

Charlie said: ‘It’s a public forum and they should be supporting people who deserve their support and encouraging.

‘I am trying to become an advocate for children like Harry and families like us and hope Instagram would support us in a positive way, not make life difficult – because we have enough already.’

The app also bans content used to bully or harass anyone based on their race, gender, sexual orientation, religious affiliation, disabilities or diseases.

Charlie writes a blog about her family’s experiences on her website www.ouralteredlife.com.