Whether he’s facing inappropriate questions from strangers or retrieving toys from U-bends, Simon Hooper’s posts on life as an outnumbered man in a chaotic household of six have made him a one-man Insta-brand – with 827,000 followers

On being a father of four

I’ll be honest – when I found out at 24 that I was going to be a dad I was bricking it. What made it worse was that none of my friends had embarked on the good ship fatherhood yet, so I was the first one pushed out to sea in a tiny boat with no sail or rudder and forced to explore the choppy ocean, otherwise known as parenting, that lay before me.

Ten years on, I’m husband to Clemmie and a father to our four girls – these amazing people have made me who I am today and I owe them everything. I did react very differently, though, each time I was told that we were going to have a baby – or in the most recent case, babies. 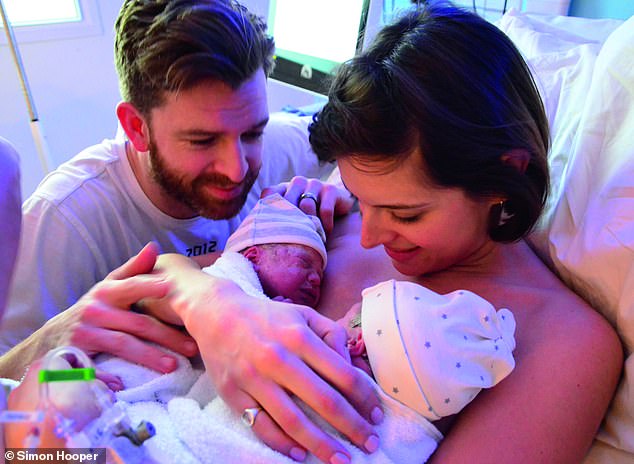 Daughter number one – a surprise

My reaction: Oh. My. God. Why the hell is this happening? I’m going to sue the condom company for this.

My reaction: Oh. My. God. This is brilliant – I can’t wait to tell everyone that Anya’s going to have a little sister!

Daughters numbers three and four – planned and a surprise

My reaction: Twins! I bl**** knew this would happen if we went for a third. It took Clemmie ages to talk me into this, and now… I mean, how are we going to cope?

Of course, I wouldn’t change any of it, except for perhaps having a mute button grafted on to them at birth, but we can’t have everything we want, can we?

On the importance of vetting visitors

After Anya, my eldest daughter, was born, I was a complete novice when it came to visitors. I was like a trainee bouncer who’d lost the guest list and just let everyone in to make my life easier. Much as with the release of a new iPhone, the crowds were deep at our door, all wanting to get their hands on our shiny new gizmo.

Within two days, the house looked like a florist had dumped all their old stock in our living room. Clemmie loved the flowers, but getting to the bathroom involved taking a machete and a day’s supply of water should we not be able to find our way back through the foliage.

Having people round can be enjoyable, but it can also mean you suddenly find yourself tidying up to convince them that you’ve got your act together, and doling out the nice biscuits that you were saving for yourselves as all the previous well-wishers have polished off the digestives.

After the twins were born, I opened the door to find a pleasant lady who had brought round some smoothies. I didn’t quite catch her name but, being polite, I invited her in nonetheless, assuming she knew Clemmie, and sent her upstairs to say hi to my wife, who was busy being a mobile restaurant – tandem-feeding the twins.

It was only when the lady left some ten minutes later that I heard Clemmie yelling: ‘Who the hell was that?’

‘Wasn’t she one of your friends?’

On reflection, I should have asked the random woman a bit more about herself – ‘So how do you know Clemmie?’ would have sufficed. Oh well, you live and learn. 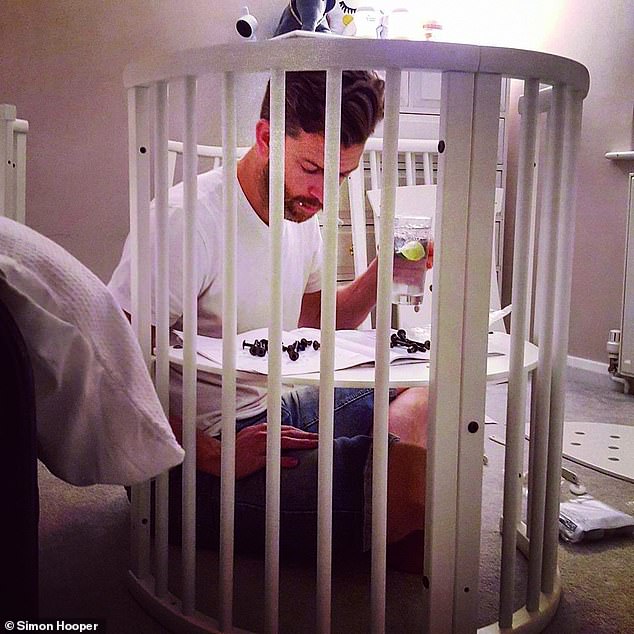 My years of erecting wobbly flat-pack furniture in my student digs finally paid dividends when it came to assembling a cot. It was only midway through my second G&T that I realised I’d built the sodding thing around me like a scaled-down Alcatraz. Did I read the instructions properly? Did I hell! Ten years on and my collection of Allen keys would rival that of an Ikea distribution centre 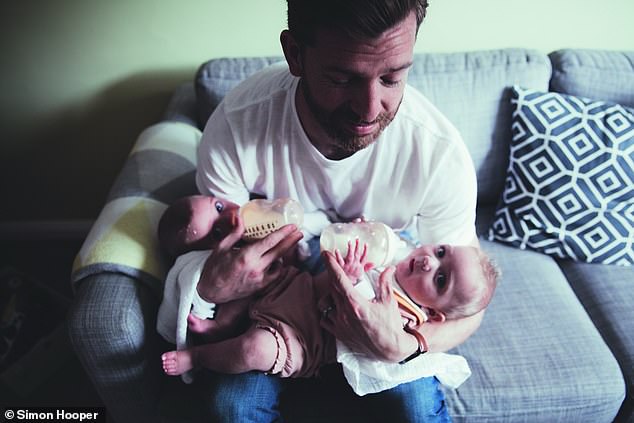 I like being popular, but dividing my time between all five women in my life leaves me feeling more thinly spread than the last scrapings of a jam jar. If I could be everywhere at once, then I would Yes, this makeshift cot was completely against manufacturer’s guidelines, but when your wife has had an evening out for the first time in a year and needs child-free ‘special sleep’ thanks to all the cocktails, it’s important to have easy access for those night feeds

On strangers who talk to you just because you have children

As a guy, I’m not likely to go up to a stranger carrying a baby and start chatting. And if I did, they’d probably think, ‘What the hell does this weirdo want?’ Women, however, seem to be totally OK about striking up a conversation with me when I’m out with the girls. I’m not against it but they do sometimes catch me off guard, usually when I’m trying to corral the older girls on scooters away from the road, wrestle one twin who has performed a Houdini and broken free from the buggy while also trying to find the other one’s dummy, which was dropped somewhere between the house and where we currently are.

On the words I never want to hear again

‘Out on your own – where’s Mum? Are you giving her a break?’

Patronising words that assume that men are either incapable of looking after babies without the supervision of wives/girlfriends, or struggling in some way that mothers don’t. So here are some of the responses to flummox my interrogators:

‘She told me that she didn’t want to be a mum any more and moved to Ibiza to be a yoga instructor.’

‘She’s behind you.’ (Then run away when they turn round.)

‘Well done you for getting out and about.’

‘Do I look like a geriatric? Do you see me with a Zimmer frame?’

To me, making an assumption about a child’s gender is almost as bad as making eye contact with a large woman while on public transport, guessing she’s pregnant and then offering her your seat – only to discover that she’s just large. Surely the rule should be that unless you’re 100 per cent sure don’t mention it.

‘Are they all yours?’

‘No, I’ve just been to the park and scooped up a collection of random children.’

‘Are you insane? Four is enough for me.’ Also, why is there an assumption that because I have girls, I’m somehow not fulfilled? My girls are my life. 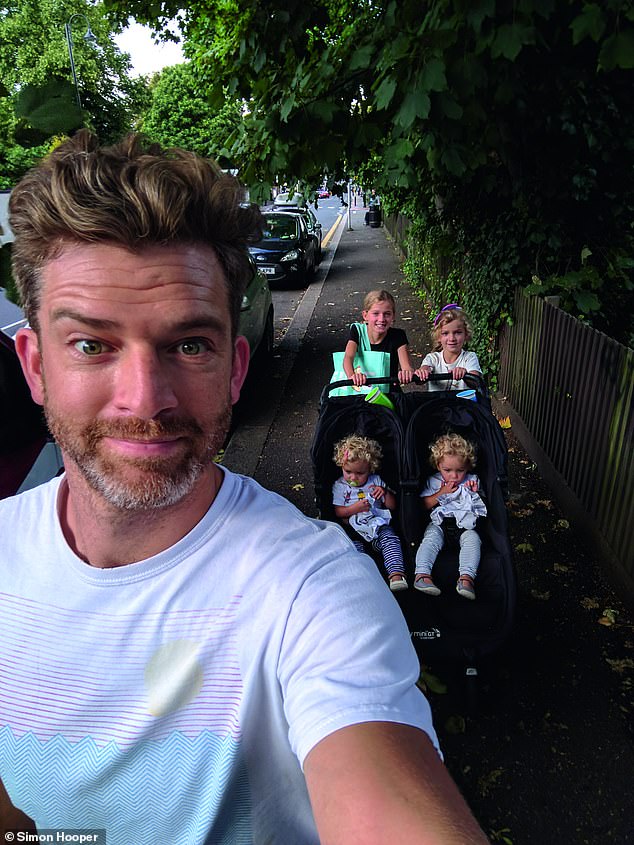 Getting down the street can be a slow process with babies. Before I became a father I was just another unapproachable guy you thought might mug you but now with four children in tow, I’m an upstanding member of society who often gets interrogated by total strangers 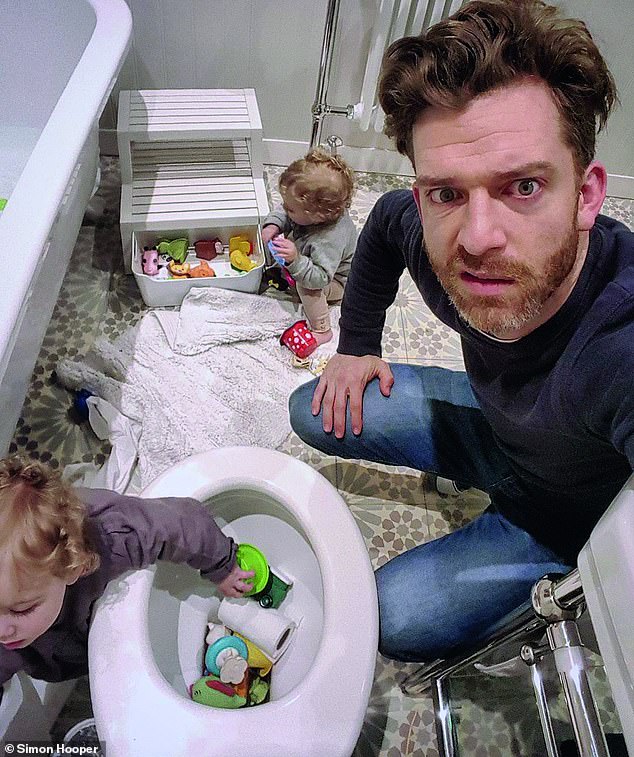 One of the many pleasurable jobs I have as a father is fishing items out of the loo. I’m sure I’m destined to die on a cold, wet bathroom floor with my hand trapped in a U-bend trying to retrieve a soiled toy 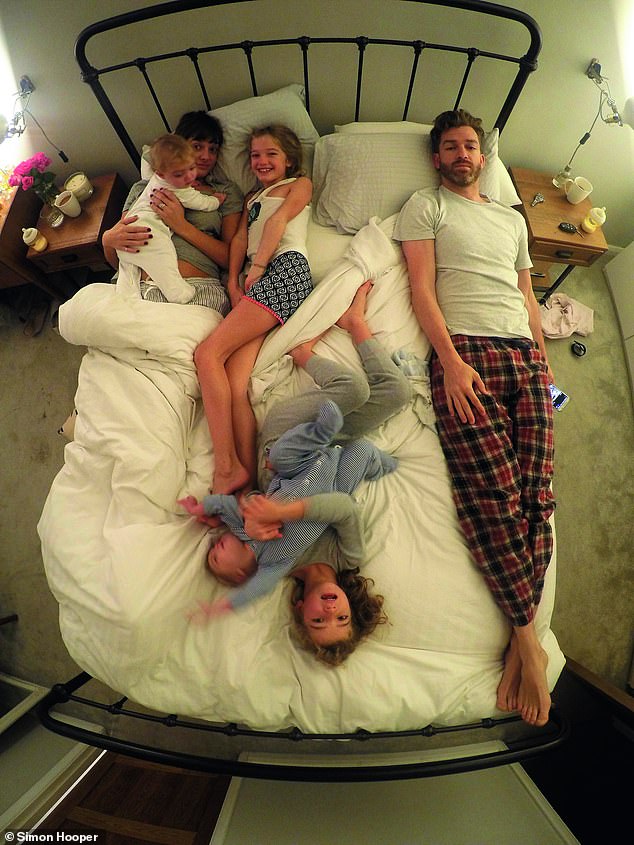 I have no idea why, but irrespective of how big your house is, everyone congregates in one place like a game of sardines that no one wanted to play. If I were claustrophobic, I’d be permanently hyperventilating as I have no space any more

Secretly I’ve grown to love days when I’m in charge, as the strict regime of Clemmie’s OCD-level cleanliness can make way (albeit temporarily) for a new father-led revolution, in which the rules are relaxed and the house can settle. I know that Clemmie trusts me to look after the kids but looking after the house is a completely different matter and I’ve had a number of what we’ll call ‘learning experiences’…

● The time I was cooking with one of my daughters safely secured in the bouncer watching TV. My nose was suddenly hit by a familiar smell. I discovered my beautiful offspring had escaped the clutches of her harness, removed her full nappy and was rolling around the floor, spreading its contents.

Learning point: babies are escapologists in training and seemingly have vertebrae made from jelly, enabling them to wriggle out of the tightest of straps.

● The time I forgot to close the stair gate. Noticing it was quiet, I ran upstairs to find both twins at Clemmie’s dressing table. They had removed all her lipsticks from their plastic sheaths and snapped them in two. On closer inspection I discovered that they were creating a masterpiece with said lipsticks on the carpet we’d just had laid. Just so you know, lipstick doesn’t come off carpets and if you wipe it, it just smudges, resulting in something that is reminiscent of a murder scene minus the chalk-body outline. It’s still there today.

Learning point: children gravitate towards things they know they are not supposed to touch. 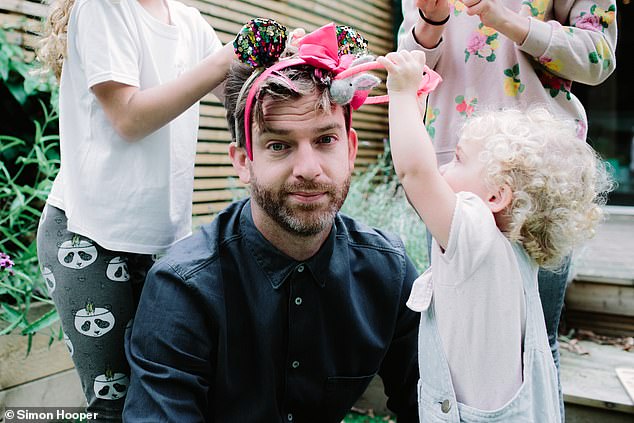 I also do hair modelling. You’ll never know real pain until you’ve had a hair clip driven into your scalp by a child who then laughs as blood rolls down your temple. It’s fun. Sort of 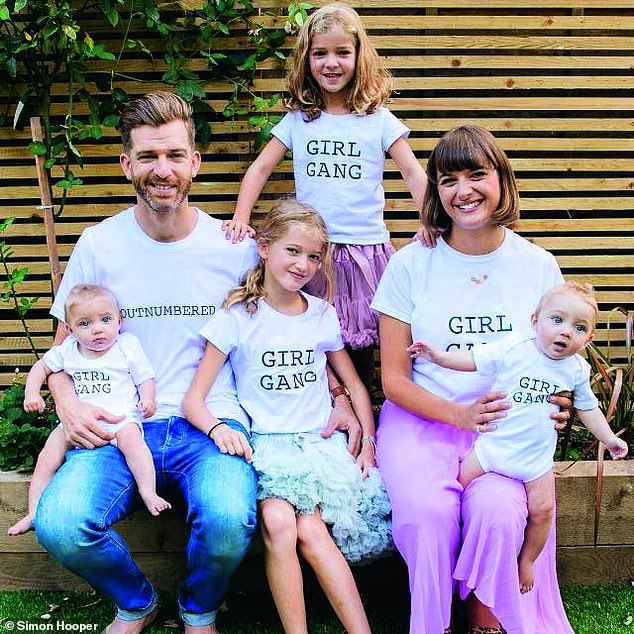 Me with my girl gang, completely outnumbered and outgunned in every way. Who knew that my male-chromosomes-carrying sperm would go on strike during my procreation years? A decade ago I was worrying about being a father to one child; now I’m literally knee-deep in them – but I wouldn’t have it any other way

● The time I decided to sand the kitchen table while Clemmie was away for the weekend. I thought I could clear up the mess by the time she got home. I was wrong. Looking back, I probably should have taken the table outside to do it. The kids had sawdust in their hair and up their noses for days.

Learning point: if you have to do woodwork, do it in a well-ventilated area. Or make sure that your wife is away for longer than two days to allow yourself sufficient time to clear up. 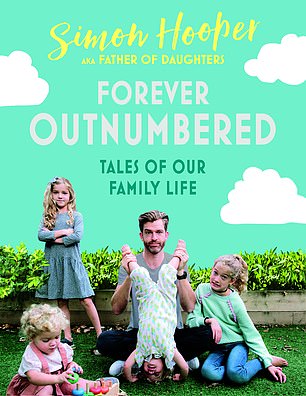 The list of mishaps could go on for ever. However, looking at this handful of examples does make me sympathise with Clemmie when she says that having me around is ‘just like having a fifth child in the house’. No wonder she rarely gets excited about coming home when she has been away for more than a day. It’s not because she hasn’t missed us – of course she has, she can’t wait to see us – it’s just the five minutes after she comes through the door and starts to assess the state of the house that she hates.

For information about book events with Simon visit: foreveroutnumbered.com