By Helen Roberts for MailOnline

Our dogs are like members of our family, always there for us, without judgement and full of unconditional love.

But they’re also quite hilarious. And social media users from around the world have shared their best photos of their dogs doing the silliest of things, with Bored Panda collating the best posts into a gallery.

While one dog looks totally unimpressed with her new puppies feeding off her, another dog lays flat on the pavement with legs spread out refusing to go home after a walk.

Another post sees a group of dogs swimming and contending with a wave in the ocean, going on to create a magical photograph.

Tired! This dog looks how many new mothers feel. Her face couldn’t be any more animated as her little puppies feed off of her 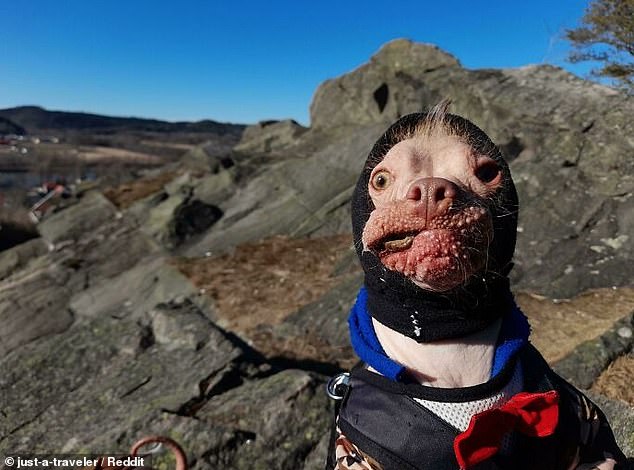 This owner posts ‘it’s hard to capture my dog’s beauty on camera’! This little pooch was even mistaken for a turkey and looks like it has one eye, but it does in fact have two 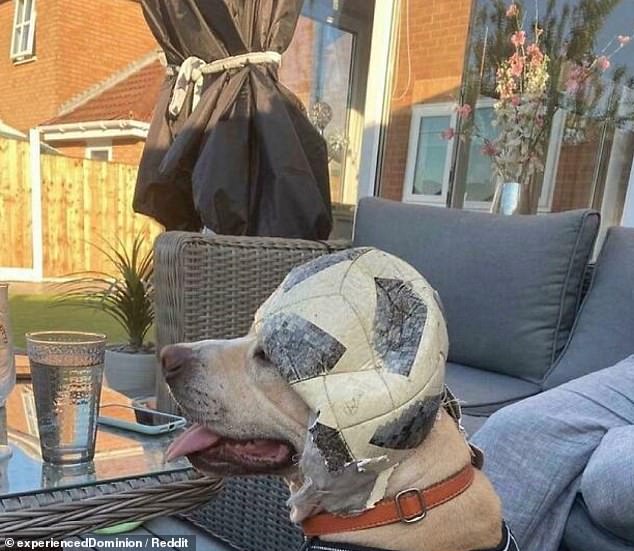 Trouble! This dog called Zion had fun with the owner’s nephew’s ball but ended up wearing it like a helmet. The dog looks ready for a game of American football 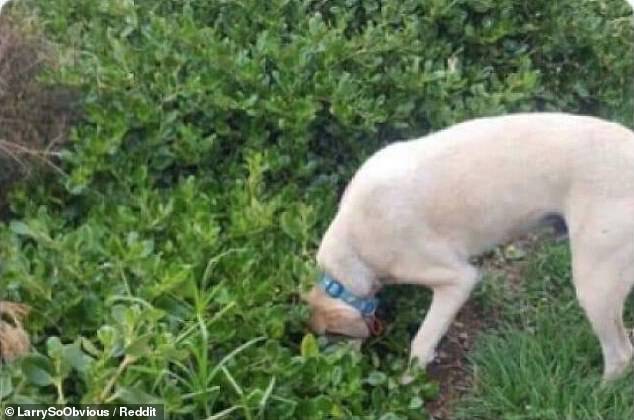 Hungry! Dusty found a pie in this bush on a walk a month previously, ever since, the bush must be inspected closely for more pie, naturally! 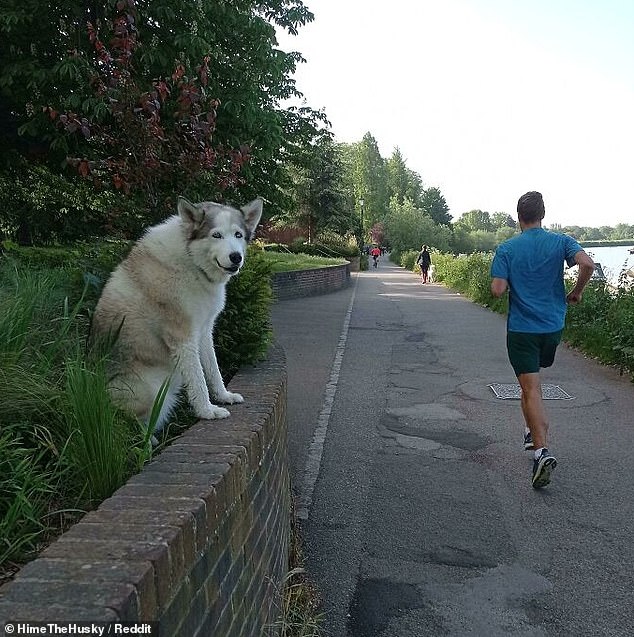 Loving! This gorgeous Husky realised she got a lot of attention from passersby when she simply sat here, so apparently she sits here all the time 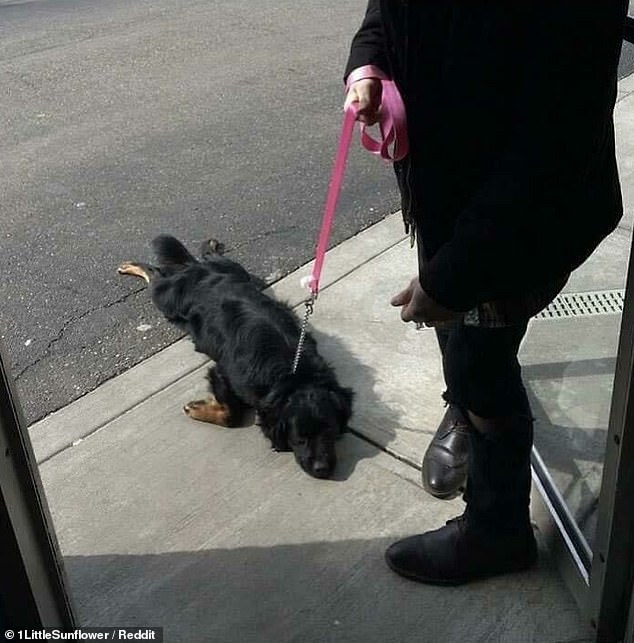 Not going home! This is Robert and he does this – spreads his legs and refuses to move – every time he realises his walk is over and it’s time to go home 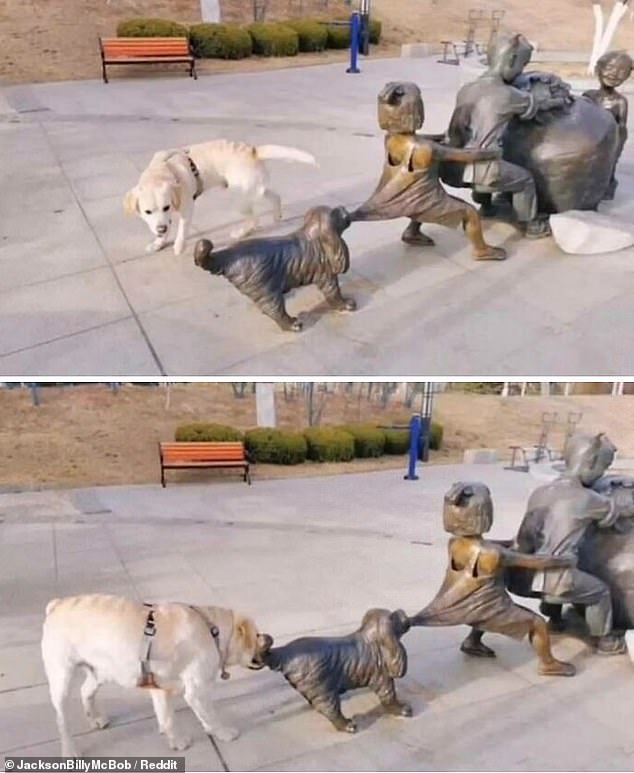 Totally confused! This poor dog has no idea what it’s found. It most probably thinks by grabbing the tail it’s trying to help somehow 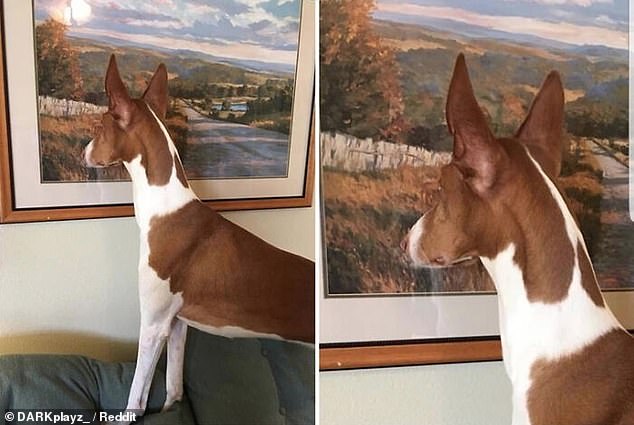 This dog thinks the painting is a real window, sits there most of the day. The owner can’t bear to interfere 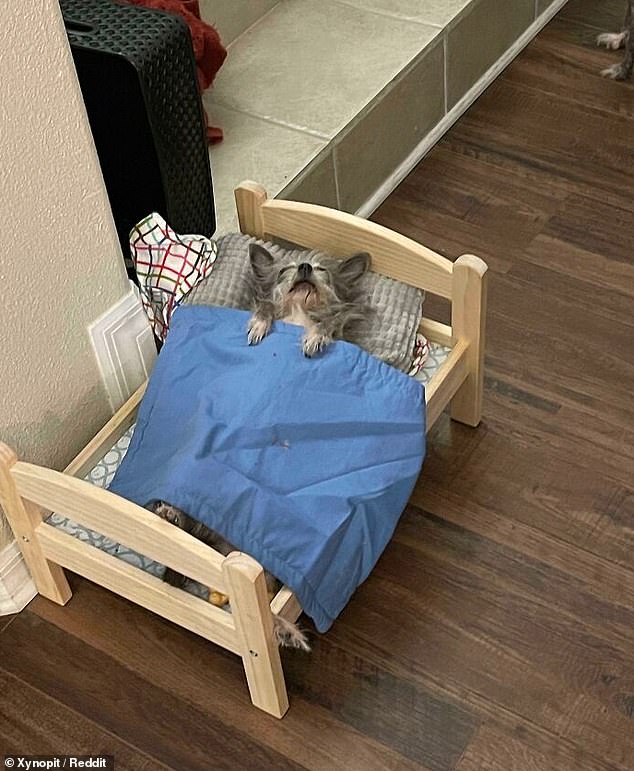 This dog has realised that sleeping like a real person has its advantages! The owner has admitted it’s learned to sleep like a human, and another person added ‘they learn fast’ 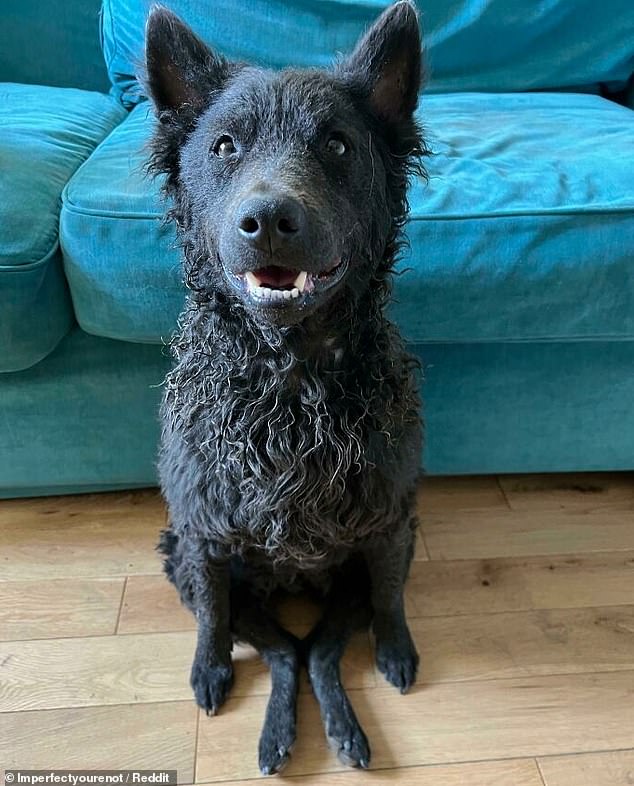 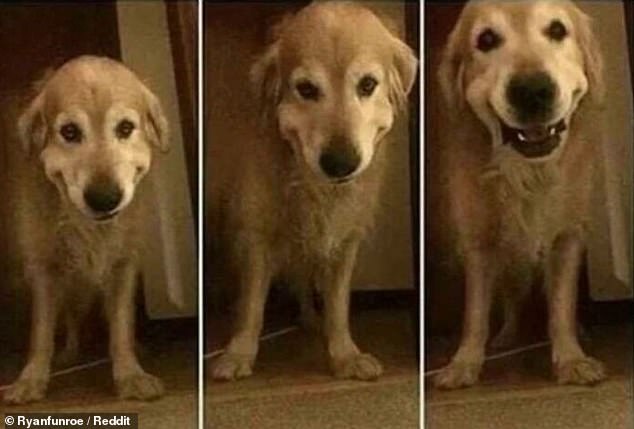 This owner gave the dog a chicken twist stick and managed to lodge it in between his cheeks, with this hilarious outcome – a sarcastic looking smile 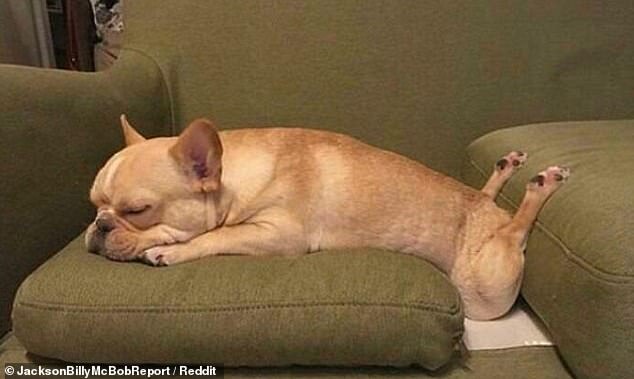 Yoga! This dog not only looks like it’s in the middle of a yoga position but it also looks like it has chicken legs 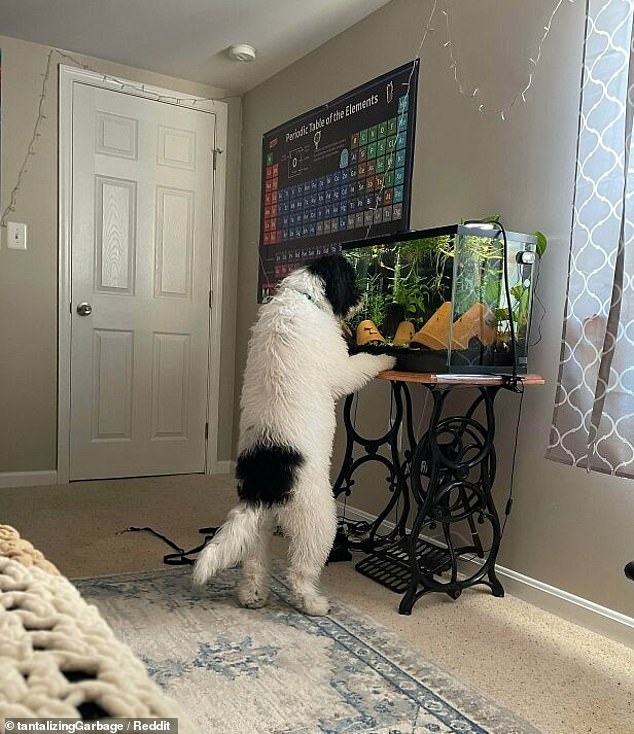 Cat tricks! While this type of thing is normally related to cats, clearly this dog has been picking up some tips. She stands watching the fish in the tank for ages 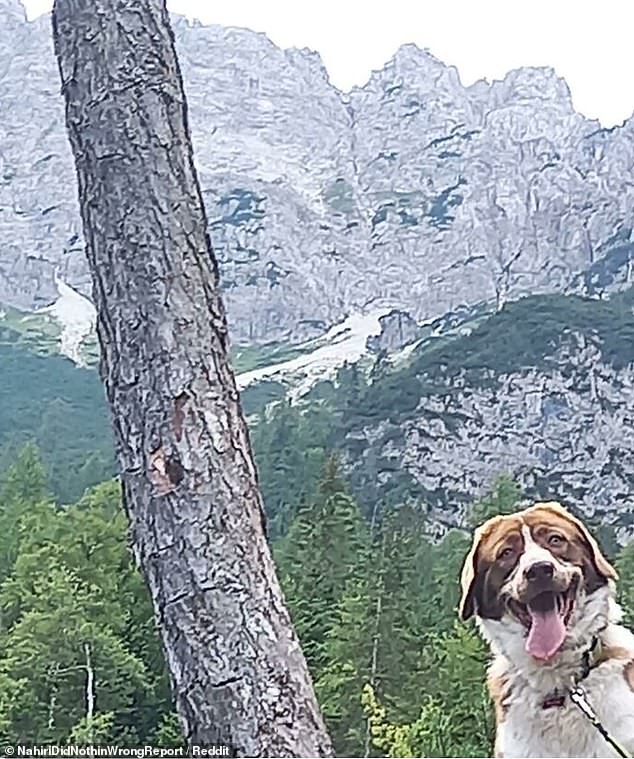 Hello! This owner wanted to take a beautiful photo of the landscape and then the dog jumped in 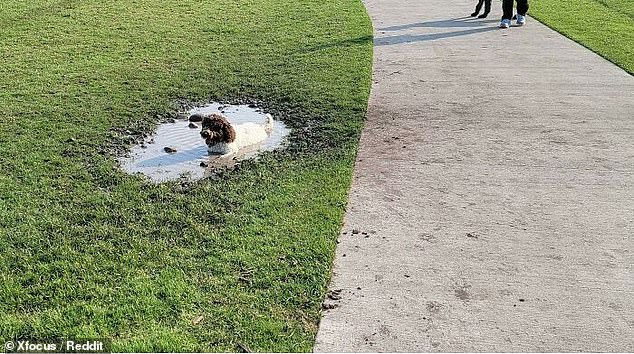 Some dogs just love water, and this one will find any excuse to jump in. So much so the owner tries to avoid parks with water features, but the dog will still find some water to sit in 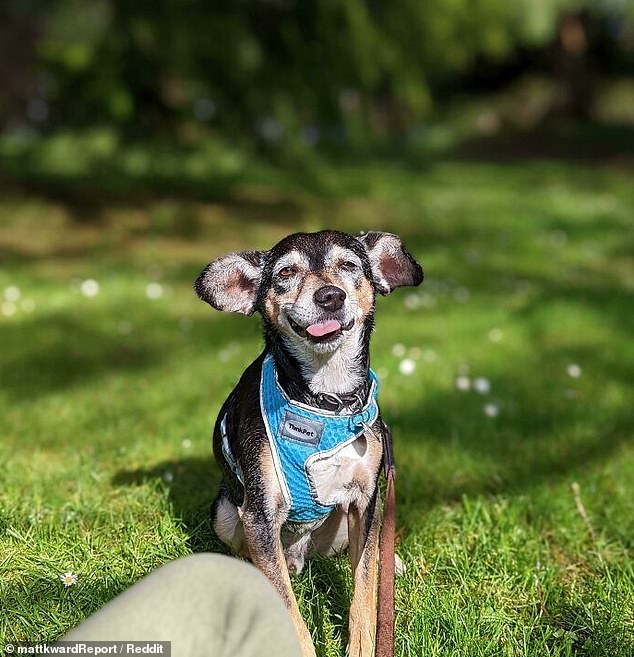 Mid-sneeze and this is the result! This owner managed to capture the moment its dog was about to sneeze, managing to capture a perfect moment on camera 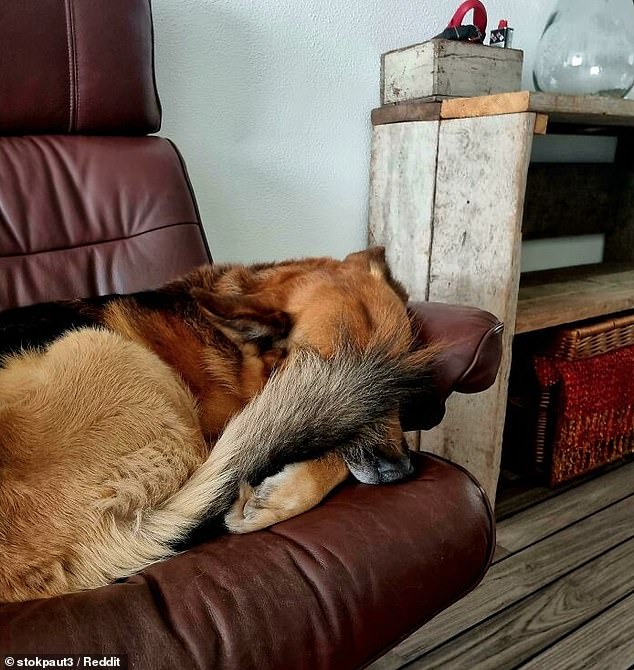 This German X Belgian Shepherd aged 11 finally realised the uses of a bushy tail. Now it uses it to dim the lights during an afternoon siesta 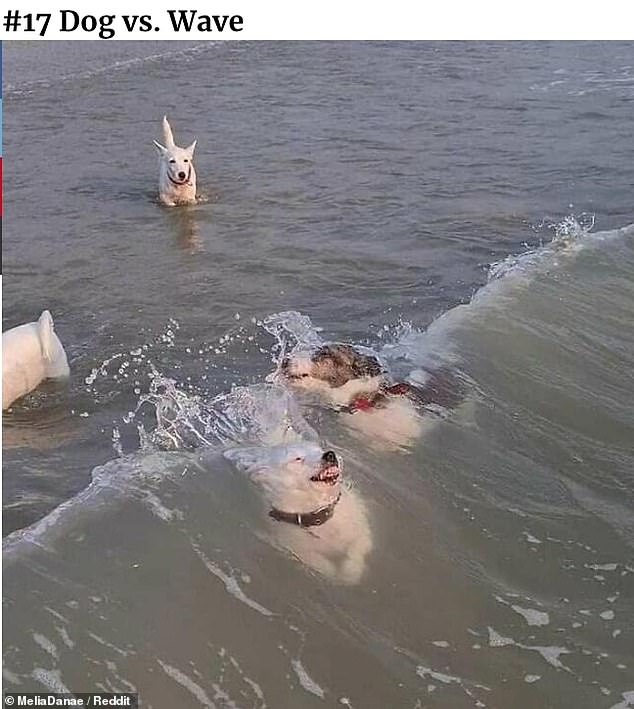 Dive! A hilarious moment when a group of dogs went swimming in the ocean and a wave hits them. The fourth looks on either concerned or enjoying the moment 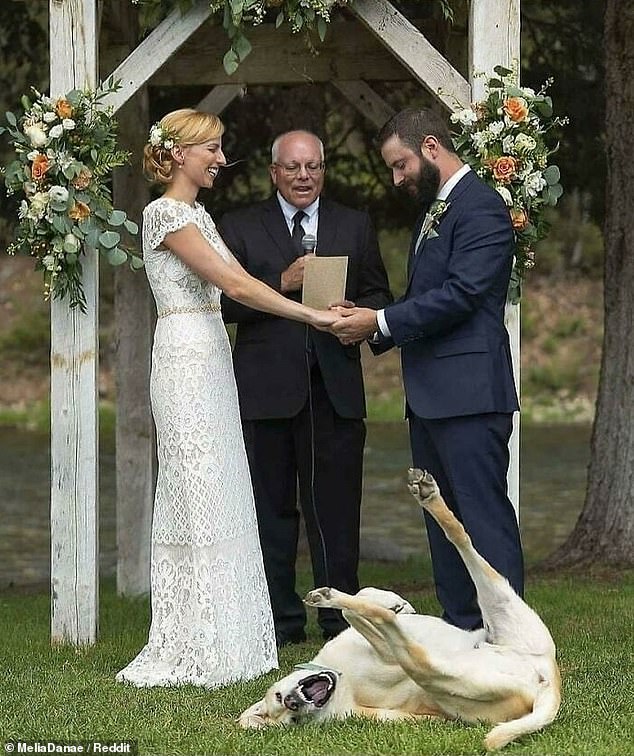 It’s meant to be an idyllic moment but this dog had other ideas. While its owners were taking their vows during their wedding day, this dog decided to role around in hysterics or there was an itch on its back 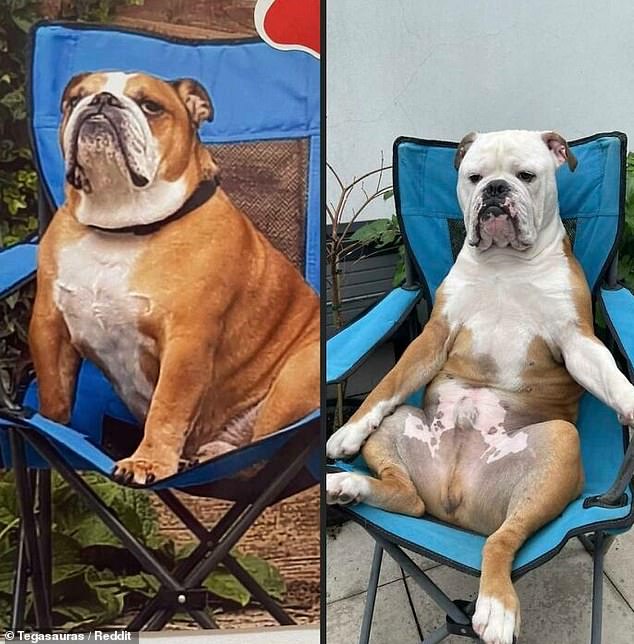 The dog on the left is the owner’s old dog and the one on the right is their new dog. Both with great attitude for Bulldogs.