As a general rule it’s always best to pay attention to warning signs near a shark tank – be it real or virtual.

Unfortunately for one man this lesson was one that needed to be learned the hard way.

Gregory Heinzman was enjoying an afternoon at the International Spy Museum in Washington DC on Sunday when he came across a screen showing a computerised shark.

Above the screen in bold letters were the words ‘touch at your own risk’ – a warning to which the daredevil visitor paid no heed.

Footage filmed by Mr Heinzman’s friend, Casey Peck, shows him placing his hand on the virtual tank as the huge underwater beast drifts by.

For a few seconds nothing happens and the shark lazily drifts away.

Mr Heinzman appears bemused but perseveres in touching the screen.

But just as he turns to the camera to wonder what all the fuss is about a huge shark rushes straight to the screen before crashing into it and appearing to form a crack.

The shock is overwhelming for Mr Heinzman who is thrown backwards and on to the floor in terror. 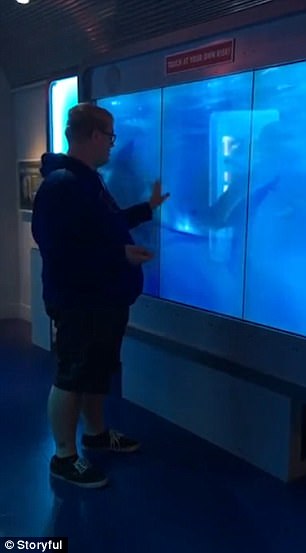 He is then seen visibly shaken on the floor as he recovers.

The video was uploaded to the internet and has since gone viral with more than 7 million views.

Ms Peck told Storyful she knew Mr Heinzman was easily frightened and had to capture the moment.