The return of international travel has put WH Smith on course to ‘return to meaningful profit’.

Chief executive Carl Cowling said yesterday the retailer has seen a ‘significant improvement’ in trade since the start of its financial year in September.

There was a particular boom in travel around the October half-term and its travel stores – in airports and train stations – returned to 84 per cent of pre-Covid sales for the month.

Sales up: There was a particular boom in travel around the October half-term and WH Smith’s travel stores – in airports and train stations – returned to 84% of pre-Covid sales for the month

This was boosted further by this week’s reopening of trans-atlantic flights between the US and the UK, Cowling said.

The boss of the 229-year-old retailer said the business was now ‘well positioned’ for the future having racked up losses over the past two years.

Cowling said: ‘We are now in a strong position to grow our business as our markets continue to recover, returning to meaningful profitability in the current financial year.’

It will operate them under its US In Motion brand and sell everything from iPads and bluetooth speakers to headphones and phone chargers.

The company is planning to open more than 100 stores worldwide including 58 in North America over the next three years.

AJ Bell analyst Danni Hewson said it is ‘only fair’ Cowling should ‘big up’ the business.

She said: ‘It has been battered and the achingly slow return of passengers, both to airports and train stations, has meant the pain has lasted longer for WH Smith’s than for many of its High Street compatriots.

Its travel business has always been the retailer’s crowning glory and the fact it’s poised to fill in some of the gaps left by Dixons Travel suggests this is a business with a sound, long-term strategy.’

The upbeat outlook came after the retailer was hammered by travel restrictions in the year to August 31.

Travel shops make up 560 of its 1,365 stores worldwide. Its travel arm racked up losses of £39million in the year, more than the £33million loss it made in the previous 12 months.

Analysts expect it to report a £70million profit in the current year.

Passenger numbers take off at Heathrow

Heathrow passenger numbers have improved for the sixth consecutive month

Some 3m passengers travelled through the airport last month, compared with 1.2m during October 2020.

Relaxation of travel rules ahead of half-term ‘unleashed pent up demand’, a Heathrow spokesman said yesterday. 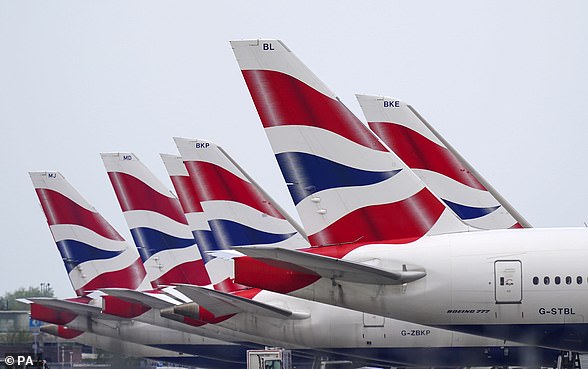 Some 3m passengers travelled through Heathrow last month, compared with 1.2m during October 2020

But it urged ministers to ‘reassess’ the testing requirements for fully vaccinated travellers arriving in the UK. Those are required to pay for a lateral flow test taken on or before the second day after their arrival.

Heathrow noted that its passenger levels remain 56 per cent down on pre-pandemic levels, and air travel is recovering quicker at its European rivals.

The airport also called on the Government to support investment in sustainable aviation fuel (SAF).