This is the astounding moment an intruder jumps into an elephant enclosure at a zoo in Denmark.

The unnamed man can be seen perching reflectively on a rock at Copenhagen Zoo as stunned onlookers watch with horror as the elephants charge towards him.

The older elephants protectively flank the young calf and stamp on the floor and bash their trunks on the ground, trumping and trying to warn the man off.

Off-camera a person can be heard saying ‘go away, go away’. 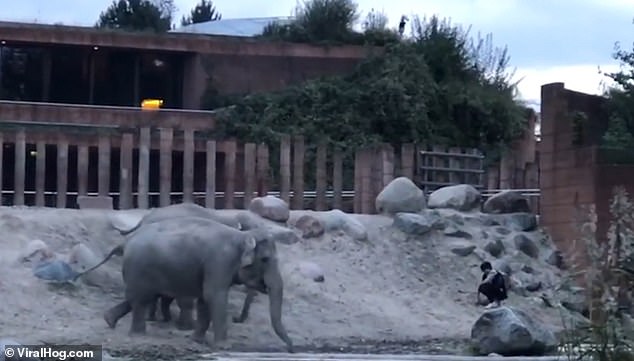 The older elephants protectively flank the young calf and stamp on the floor and bash their trunks on the ground, trumping and trying to warn the man off 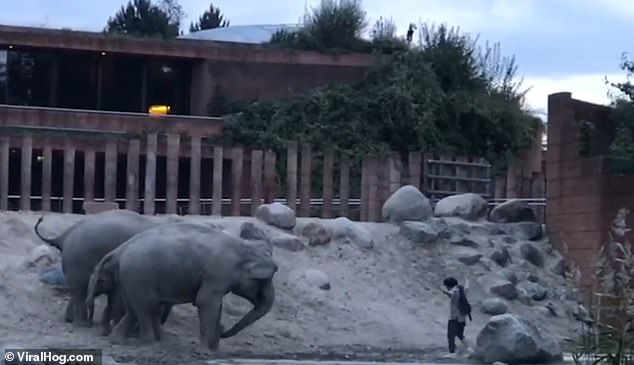 He quickly realises he is in over his head as the elephants are behaving very aggressively. He desperately starts to look for a way out and raises his hands in a sign of deference

The man slowly moves from the rock he is perched on with his hands raised in the air and unbelievably, moves towards the elephants.

They continue to bash their trunks on the floor and make it abundantly clear the man is not welcome in their habitat.

The man starts to move away from the elephants and points to the other side of the enclosure, with a woman shouting ‘go out’, trying to guide him from the obvious danger. 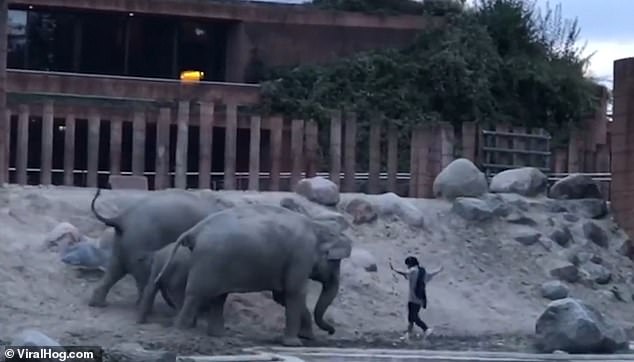 He holds his arms out wide and slowly makes his way over the rocky terrain towards safety.

But the two elephants want to make double sure the unwanted intruder is leaving them and their baby calf alone.

They continue to flank the young calf and closely follow the man, who is wearing a flannel shirt, blue trousers and trainers, with a jumper slung across his shoulders.

He gets to the other side of the pen and nimbly leaps up and over a fence, much to everyone’s relief.

It is thought the man was then detained by zoo security for the potentially life-threatening move.

The man was clearly not aware that despite their perception as a lovable giant, elephants can become very dangerous when agitated or threatened.

The mammals- who are the largest land animals now living- are responsible for a number of human deaths every year.