‘It would be good news for the UK equity market’: Investors put pressure on Boris Johnson to help bring Arm back for London listing

Top City fund managers are lining up to take a stake in Arm as the pressure grows on Boris Johnson to bring the float to the UK.

Abrdn and Jupiter Asset Management have called on the chip designer to come home and return the company to its former glory.

Fund managers believe the listing would also help London to shed its image as a ‘mature and dull’ stock market, full of old-fashioned legacy miners and oil explorers.

The Prime Minister, meanwhile, has joined a final push to convince Arm to choose the Capital and, as part of the last-ditch effort, he has written to executives at Arm’s Japanese owner SoftBank.

New York is the favoured destination for the float but no formal decision has been made and ministers and executives have launched a charm offensive to persuade SoftBank to rethink its preference for the US.

Sources close to the situation say a decision will be made by the conglomerate’s executives over the summer after the firm successfully regained control of Arm China earlier this month.

Digital minister Chris Philp and Lord Grimstone, the former Barclays chairman who now heads the UK’s Office for Investment, are leading the lobbying efforts, and it is understood that the Government is also weighing up taking a stake.

Andrew Millington, head of UK equities at Abrdn, told the Daily Mail: ‘Arm is a fantastic business, which we were indeed shareholders in before it went private.

‘It would be good news for the UK equity market if Arm were listed here again, as having large, successful, growing tech companies in the London market would help in the battle against the perception in some quarters that the UK market is mature and dull.’ 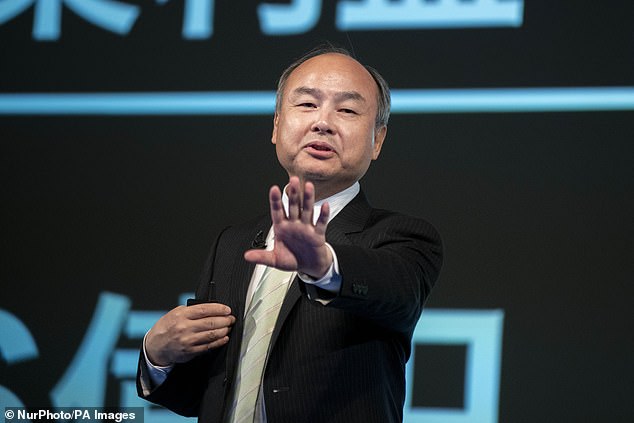 Under pressure: SoftBank boss Masayoshi Son, above, faces calls to float Arm in the City

Other heavyweights to get behind the float include Richard Buxton, at Jupiter Asset Management, who believes that institutional and retail investors still have an emotional tie to the firm.

‘London institutional and retail investors have an attachment to Arm as it was such an outstanding success when it was listed before,’ he said.

One of the City’s foremost investors, Martin Gilbert, chairman of Asset Co, told the Mail in February: ‘It is not that we’re short of tech entrepreneurs and fantastic, innovative businesses in the UK, they simply decide to remain private or to list on a stock exchange elsewhere, which is a pity for UK investors. Arm listing in London would be a major coup and signal the FTSE is a welcoming home to technology businesses.’

Chancellor Rishi Sunak told the Daily Mail three weeks ago that the Government was doing all it can to bring the float to the UK.

But even as the UK’s efforts intensify, with the Daily Mail launching a campaign to Back British Tech and for Arm to return to the London stock market, there is recognition that the chances of wrestling the float away from New York are slim.

Hermann Hauser, one of the entrepreneurs who spun off Arm from Acorn Computers in 1990, has called on SoftBank to float it in London and New York in a socalled ‘dual listing’.

The calls for Arm – which has not flourished under SoftBank’s sixyear ownership – to return home come after the chip designer’s £50bn sale to US tech giant Nvidia fell through earlier this year following intense scrutiny from regulators around the world over competition concerns.