Two snorkellers returned a phone they found at the bottom of a river to its owner by tracking him down using a photo of his ‘legendary’ dog on his lock screen.

Dr Rebecca Kinaston and her boyfriend Graham Johnson had spent 45 minutes snorkeling on the Clutha River, on New Zealand’s South Island, at the start of April when they found a dry bag on the riverbed.

After climbing out of the 8C river and back into their boat they found the bag contained an iPhone.

More than a month earlier in February, builder Carl Gerrard had lost the phone during a trip down the river with his family.

Dr Kinaston took it home to Dunedin and after doing some googling decided to put the drenched gadget in a bowl of rice, where it stayed for a month. 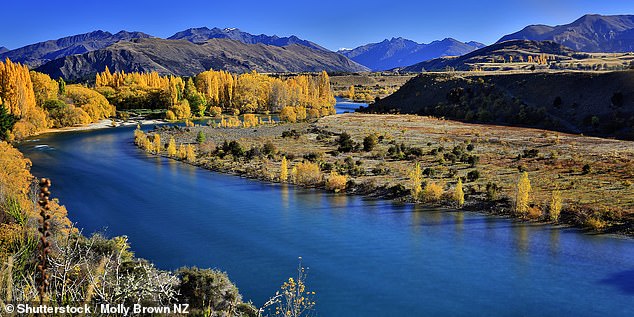 The Clutha River is one of the country’s coldest and fast-flowing rivers, coming off the Southern Alps 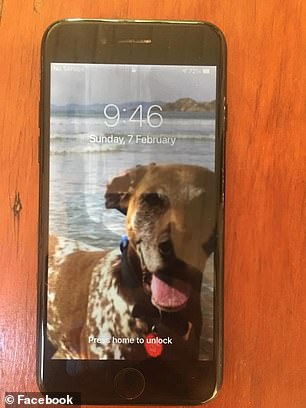 Pictured: The actual phone after it had been turned on, with the lock screen image of Magnum, Wanaka’s local legend German short-haired pointer

Dr Kinaston had a dream on Thursday night the phone would turn on.

The following day she switched the iPhone on and the noble-looking German short-haired pointer was staring straight back at her.

The date on the lock screen was February 7.

‘I plugged it in and it actually charged, it turned on,’ she told stuff.co.nz.

Ms Kinaston put a photo of the lock screen in a Facebook group for the Upper Clutha region on Friday in an attempt to track the owner down.

A friend of Mr Gerrard quickly tagged him – recognising the dog as Magnum, a ‘local legend’ in the tourist town of Wanaka at the foot of New Zealand’s Southern Alps.

‘We did float down the river a few more times and I did keep an eye out for it but working out the odds it wasn’t worth it.

‘We did joke that someone may find the phone in 50 years time and have a really good laugh.’ 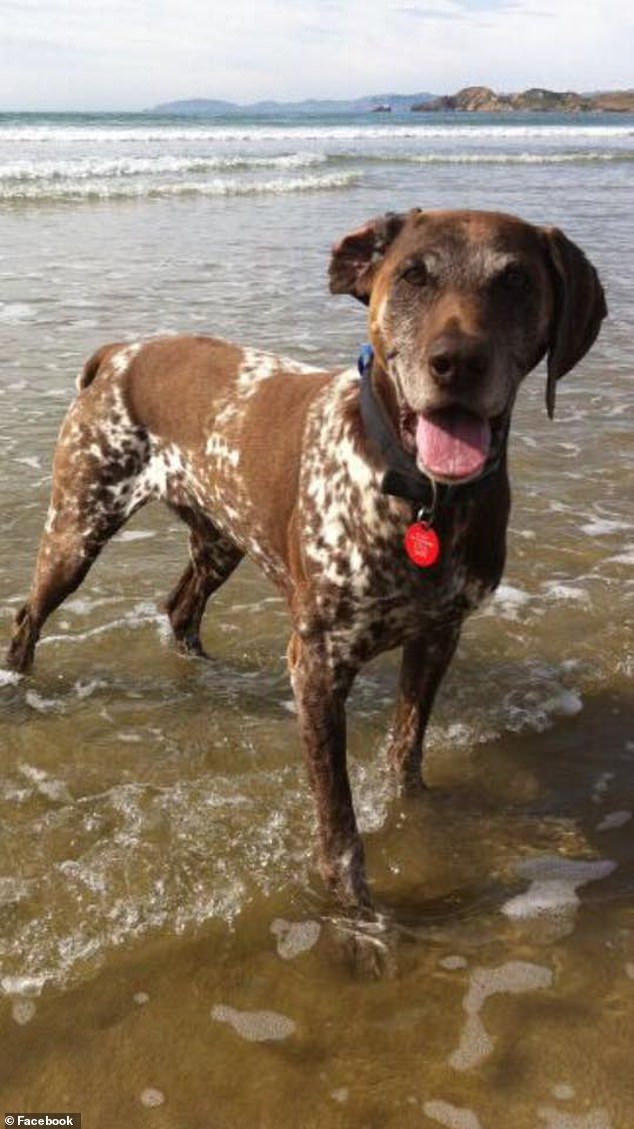 But against all conceivable odds, the phone was found after just two months.

‘I was very pleased with the find and a little bit emotional to be honest, seeing it turn up online,’ Mr Gerrard, who runs Marvel Constructions at Albert Town, said.

‘To be honest when I saw the photograph of my dog I had a lump in my throat he’s been dead for three years and we loved him dearly.’

Magnum passed away in 2017 of cancer after living a long and happy 12 years in Wanaka.

Magnum was a ‘legend’ because he ‘protected’ Mr Gerrard’s two children, Vincent and Mia, growing up, but also because of his famous tendency to roam the town. 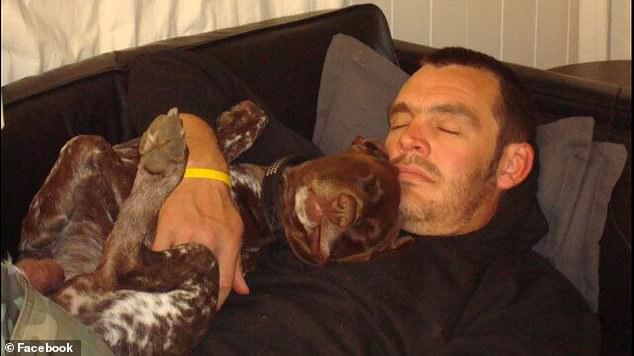 Carl Gerrard says he ‘got a lump in my throat’ when the lock screen photo of Magnum turned up on Facebook on Thursday. He is pictured on his sofa with the dog several years ago

Occasionally Magnum would turn up in Wanaka’s small but bustling tourist quarter, including on the dance floor.

‘I knew one of the bouncers at our local nightclub and I received a call from him one morning at 2am whilst I was fast asleep to let me know that my dog was on the dancefloor,’ Mr Gerrard said.

‘He actually was sitting at the front door with the bouncer managing the crowds. 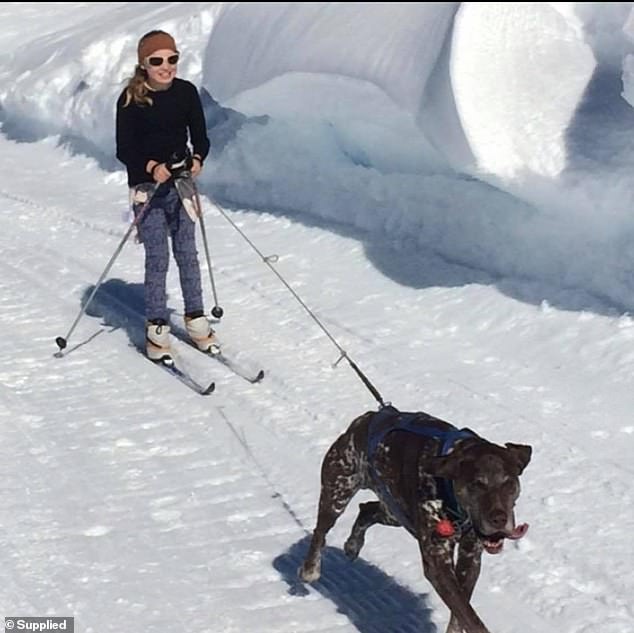 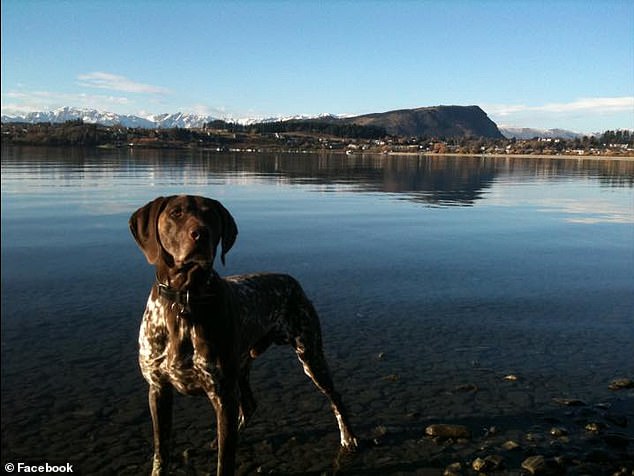 ‘This was not an isolated incident as he used to frequent the bars in town quite often to hang out and get lots of love.’

Mr Gerrard said once he was driving his car only to see his own dog cross in front of him, using a zebra crossing ‘like a human would’. 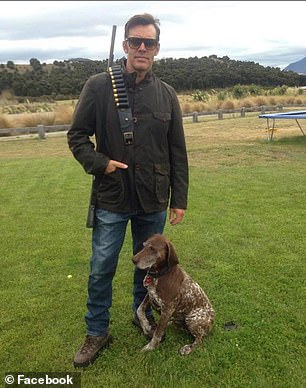 The dog saw his owner and guiltily waited at the side of the road to be packed into the car.

‘He used to come up to Cardrona Alpine resort with us when we were skiing and chases of the chairlift and followers down the mountain, he used to come hunting with me too, but still retained his ability to be a fantastic family dog.’

In a story laced with remarkable coincidences, Ms Kinaston lives only a few doors away from Mr Gerrard’s best man.

‘We are stoked so many people like this story,’ she told Daily Mail Australia. ‘It’s pretty crazy and pretty silly too.’

Mr Gerrard doesn’t have the phone back yet but said he was delighted Magnum’s lock screen photo spurred a bigger tale that means his eccentric and beloved hound got one more decent run.

‘It’s very cool that he lives on through this this story, he deserves this – he was a total legend,’ Mr Gerrard said.

‘We still haven’t scattered his ashes, they are still underneath the TV and we pat them regularly.’