An Iranian actress who starred in an Oscar-winning film has been given a five-month prison sentence for ‘propaganda activities against the state’ after re-posting a video of morality police attacking a woman for not wearing a hijab.

Taraneh Alidoosti, who starred in The Salesman – which won the Best Foreign Language Film award at the Oscars in 2017 -was handed the five-month sentence for sharing a video of a morality police officer attacking a woman on a street in Iran for not wearing a hijab.

Iranian actor Babak Karimi who co-starred with Alidoosti in The Salesman told Variety he had spoken with the actress in the wake of her sentencing.

He said she felt the sentence was an act of intimidation by the regime.

Iranian actress Taranah Alidoosti, pictured in a scene from 2017 Oscar winner The Salesman, has been sentenced to five months in prison, deferred for two years, for reposting a video of a woman being accosted by morality police

Global media outlets often refer to Alidoosti as the ‘Natalie Portman of Iran’, and she caused a stir in 2016 for revealing a feminist tattoo at a press conference for the The Salesman.

Giso Faghfouri, a veteran arts and culture journalist, tweeted the news that Alidoosti had been detained and tried because of a legal complaint from the Deputy for Legal and Parliamentary Affairs for Iranian law enforcement (NAJA).

Faghfouri tweeted: ‘Following a legal complaint from the Deputy for Legal and Parliamentary Affairs of NAJA, Taraneh Alidoosti was sentenced to five months in prison.’

Alidoosti is not expected to be imprisoned immediately as her sentence has been deferred to two years.

The subject of NAJA’s complaint was her re-posting of a controversial film showing an encounter between a morality police officer and a woman. She was summoned on January 21, 2020 but was later released on bail. 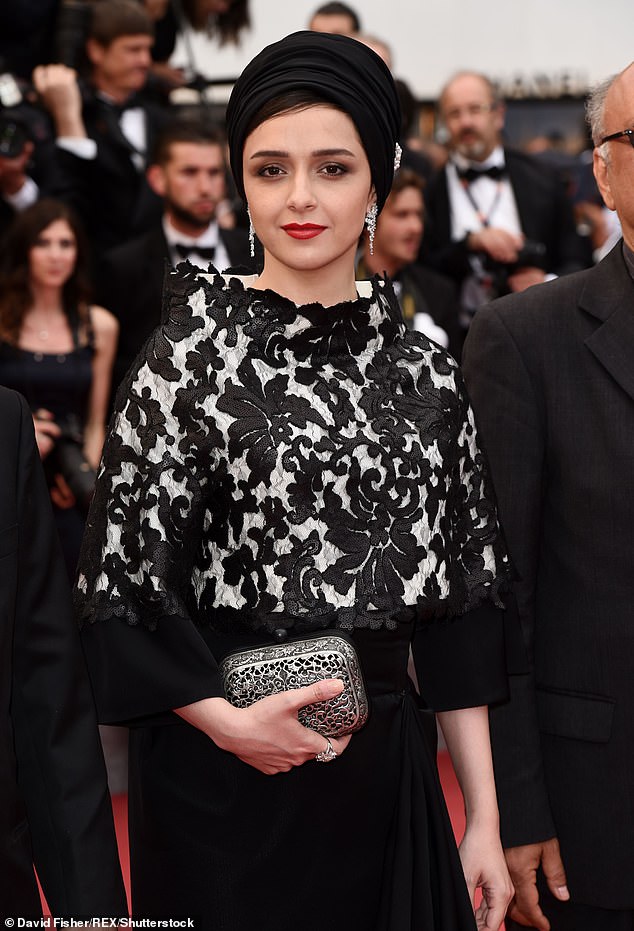 Taraneh Alidoosti is pictured at the Palme D’Or Award, 69th Cannes Film Festival, in France in 2016

Volant Media UK reported that Alidoosti was summoned to Branch Nine of the Culture and Media Prosecutor’s Office on January 21, 2020 and was charged with ‘propaganda activities against the state.’

She was released on bail after being charged and has not yet publicly responded to her sentence.

Earlier this year, she broke rank and criticised the government in Tehran in a post on Instagram, telling her almost six million followers that ‘we are not citizens’ but ‘captives’.

She also said that she had replaced her profile picture with the colour black in mourning for demonstrators that were shot dead by security forces in the protests which shook Iran in November last year.

Alidoosti has previously spoken out against Donald Trump’s decision to impose visa bans on Iranians.

In 2017 she boycotted the Academy Awards ceremony after The Salesman was nominated in the best foreign language film category, saying that the blanket ban was racist.

She added: ‘The arrest and subsequent sentencing of Taranah Alidoosti demonstrates how the regime is trying to stop Iranian citizens from using social media to expose human rights abuses in the country.’