Iran’s paramilitary Revolutionary Guard has fired a missile from a helicopter targeting a replica aircraft carrier in the strategic Strait of Hormuz.

The exercises – dubbed ‘Prophet Mohammed 14th’ – were held near the Strait of Hormuz, a vital shipping lane for a fifth of global oil output.

State television reported the exercise on Tuesday, which is aimed at threatening the U.S. amid tensions between Tehran and Washington.

The U.S. navy has condemned the military exercise as ‘irresponsible and reckless’.

It comes a day after satellite images showed the aircraft carrier being towed by a tugboat to the strait from the Iranian port city of Bandar Abbas.

An image grab from footage obtained from Iranian State TV on July 28, reportedly showing an Iranian mockup imitating a US aircraft carrier being encircled by speedboats during a military exercise near the Strait of Hormuz, above and below 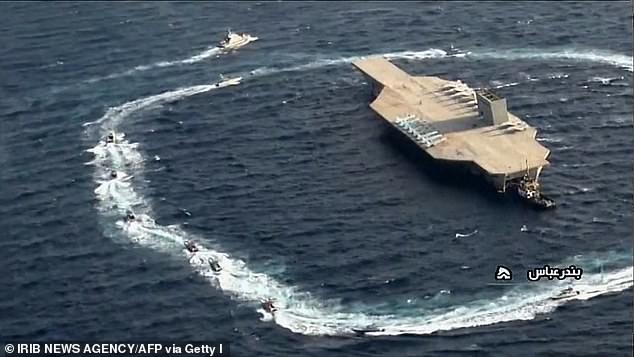 Iran’s Revolutionary Guards blasted a mock-up of a US aircraft carrier with missiles on July 28 during military exercises in sensitive Gulf waters, state television said 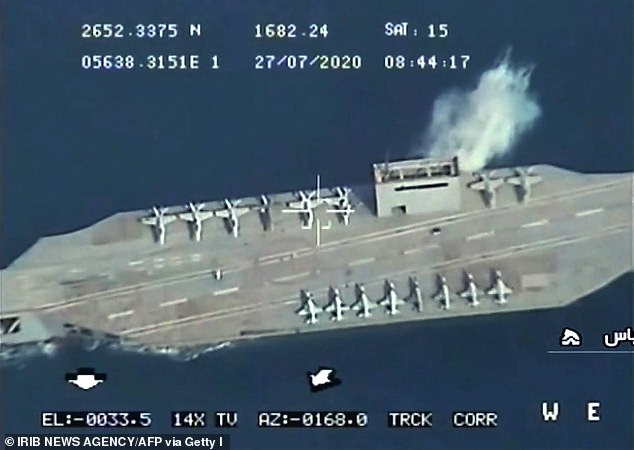 They were staged at a time of heightened tensions between Iran and its decades-old arch enemy the United States.

Footage of the war games broadcast on state television showed the Guards’ air and naval forces readying for an attack off the country’s southwest coast.

Speedboats skimmed across the water in formation before ground forces fired cannons and a missile was launched from a helicopter.

The mock-up of a Nimitz-class aircraft carrier came into view with rows of dummy fighter jets on either side of its landing strip.

The television then cut to rockets being fired out to sea from the backs of trucks, before showing damage to the hull of the mock-up aircraft carrier.

Another missile fired from a helicopter left a trail of smoke before appearing to smash into the side of the fake warship. 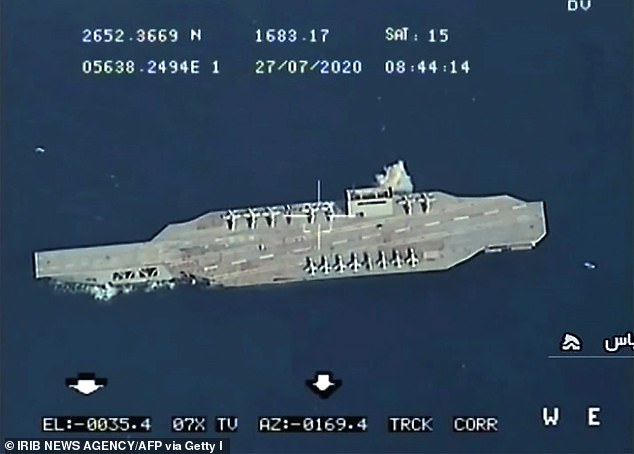 An Iranian mockup imitating a US aircraft carrier being hit during a military exercise near the Strait of Hormuz, pictured above and below

Armed forces were then seen rappelling onto the deck of the vessel, before around a dozen speedboats circle around it.

‘What was shown today in these exercises, at the level of aerospace and naval forces, was all offensive,’ Guards commander Major General Hossein Salami told state television.

The drill, in a waterway through which 20% of all traded oil passes, underlines the lingering threat of military conflict between Iran and the U.S. after last summer saw a series of incidents targeting oil tankers in the region.

While the coronavirus pandemic has engulfed both Iran and the U.S. for months, there have been increasing signs of a confrontation as America argues to extend a years-long U.N. weapons embargo on Tehran that is due to expire in October. A recent incident over Syria involving an American jet fighter approaching an Iranian passenger plane also has renewed tensions. 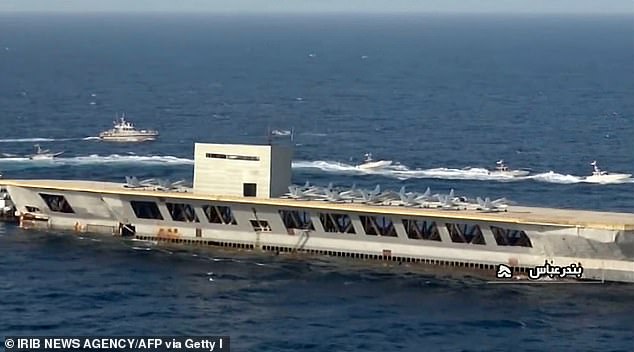 The drill, in a waterway through which 20% of all traded oil passes, underlines the lingering threat of military conflict between Iran and the U.S. 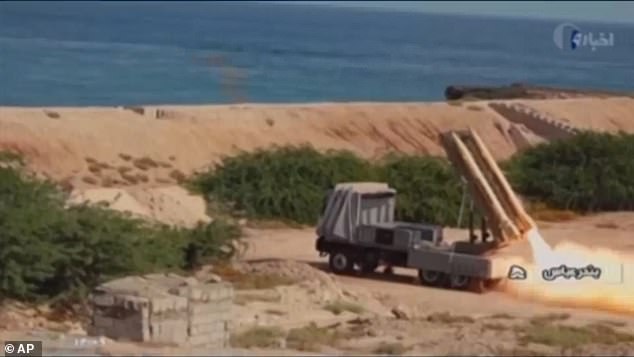 Troops also fired missiles launched from trucks on land and fast boats at sea, as well as shoulder-fired missiles (pictured above)

Iranian commandos fast-roped down from a helicopter onto the replica in the footage aired Tuesday from the exercise called ‘Great Prophet 14.’ Other footage showed fast boats encircling the mock-up, kicking up white waves in their wake.

Iranian troops also fired anti-aircraft batteries at a drone target in the exercise from a location that state television described as being near the port city of Bandar Abbas. Troops also fired missiles launched from trucks on land and fast boats at sea, as well as shoulder-fired missiles.

The Guard will use ‘long-range ballistic missiles with the ability to hit far-reaching aggressor floating targets’ during the drill, said Abbas Nilforoushan, the Guard’s deputy commander for operations, according to Guard website sepahnews.com. 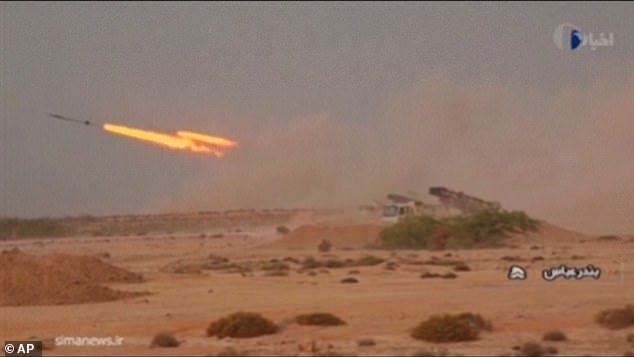 That suggests the drill could see a repeat of what happened in 2015, when the Guard mock-sunk a replica.

It wasn’t immediately clear if all the footage was from Tuesday, as one overhead surveillance image that appeared to be shot by a drone bore Monday’s date.

The replica resembles the Nimitz-class carriers that the U.S. Navy routinely sails into the Persian Gulf from the Strait of Hormuz, the narrow mouth of the waterway.

The USS Nimitz, the namesake of the class, just entered Mideast waters late last week from the Indian Ocean, likely to replace the USS Dwight D. Eisenhower in the Arabian Sea. 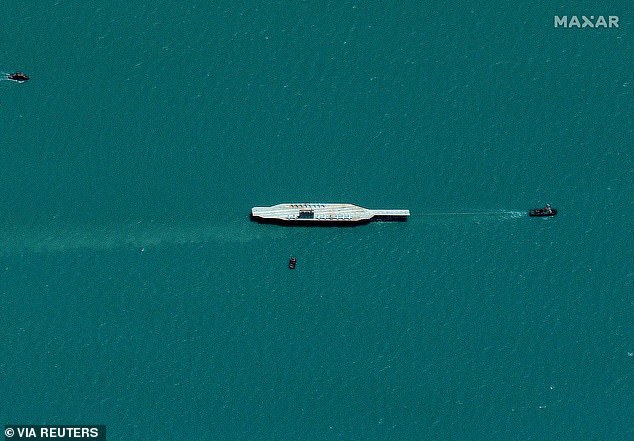 The refurbished mockup aircraft carrier is seen towed by a tugboat near Bandar Abbas, a day before it was used in a military drill in the Strait of Hormuz 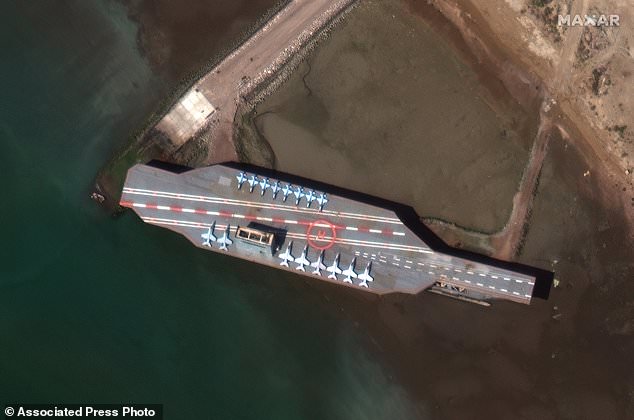 The mockup aircraft carrier built by Iran is seen at Bandar Abbas, Iran, on February 15 before being put to sea

It remains unclear when or if the Nimitz will pass through the Strait of Hormuz or not during its time in the Mideast. The USS Abraham Lincoln, deployed last year as tensions initially spiked, spent months in the Arabian Sea before heading through the strait. The Eisenhower came through the strait early last week.

The U.S. Navy’s Bahrain-based 5th Fleet did not immediately respond to a request for comment. However, a spokeswoman said on Monday the Navy remains ‘confident in our naval forces’ ability to defend themselves against any maritime threat’ after satellite photos showed the fake carrier being moved into place.

‘We cannot speak to what Iran hopes to gain by building this mockup, or what tactical value they would hope to gain by using such a mock-up in a training or exercise scenario,’ Cmdr. Rebecca Rebarich told The Associated Press then. ‘We do not seek conflict, but remain ready to defend U.S. forces and interests from maritime threats in the region.’