The USMNT’s Sunday press conference saw a testy exchange between the team’s director of communications and Iranian reporters, as the latter group reportedly accused the press officer of ‘silencing them’ by ignoring their raised hands.

Tim Ream and Walker Zimmerman answered various questions from media members but it wasn’t until the last question of the session that they fielded one from an Iranian journalist, Yahoo! Sports said.

And when Shervin Taheri did finally get a chance to ask a question (about Ream and Zimmerman’s memories of the 1998 USA-Iran World Cup match), he added a statement on the end.

‘I just want to point it out that the media officer of US national soccer team should respect international media,’ journalist Shervin Taheri said.

‘This is the World Cup. This is not the MLS Cup. Thank you very much.’

Yahoo! described the atmosphere at the press conference as ‘tense’ and said Ream and Zimmerman were asked roughly a dozen questions both about soccer and the team’s social media posts, which have sparked anger in Iran.

The press conference came after team USA’s official social media accounts displayed Iran’s national flag without the emblem of the Islamic Republic, to show ‘our support for the women in Iran with our graphic for 24 hours.’

The absence of the emblem comes as monthslong demonstrations have challenged Iran’s government since the Sept. 16 death of 22-year-old Mahsa Amini, who had been detained by the country’s morality police.

And the decision from the US Soccer Federation has severely angered the Iranian government, with them calling for FIFA to kick the USA out of the World Cup and be banned for 10 games.

Director of communications Michael Kammarman explained the rationale for the decision to remove the emblems earlier in the session.

‘The intent of the post was to show support for women’s rights,’ he said. It was meant to be a moment. We made the post at the time. All the other representations of the flag remain consistent and will continue to.’

Nonetheless, both Zimmerman and Ream made it clear that they stand for women’s rights during the session.

‘We always have been. We are focused a lot on Tuesday from the sporting side as well, you know. So you mentioned it as a distraction. I think this is such a focused group on the task at hand. But at the same time, we empathize and we are firm believers in women’s rights and support them.’

The protests in Iran have seen at least 450 people killed since they started, as well as over 18,000 arrested, according to Human Rights Activists in Iran, an advocacy group following the demonstrations. 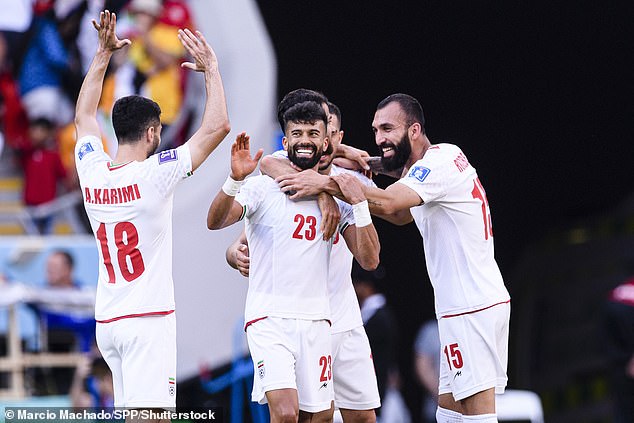 Iran’s semiofficial ISNA news agency quoted Safiollah Fagahanpour, an adviser to the Iranian Football Federation, saying that the ‘measures taken regarding the Islamic Republic of Iran flag are against the law’ of FIFA competitions.

‘They must be held responsible,’ Fagahanpour said. ‘Obviously they want to affect Iran´s performance against the US by doing this.’

The Islamic Republic emblem, designed in 1980, is four curves with a sword between them. It represents the Islamic saying: ‘There is no god but God.’ It also resembles a tulip or lotus.

At the top and the bottom of the flag, there are 22 inscriptions of ‘God is Great’ as well, which honors the date on the Persian calendar when the Islamic Revolution took hold.

The US will play Iran Tuesday, and need a win to advance to the knockout stages of the tournament.