Harrowing footage shows sick people collapsing in streets across Iran, amid allegations that the country’s coronavirus pandemic started in the Chinese embassy in Tehran three weeks before its first official case was announced.

In one of the clips, a man slumps on the kerb in Zahedan, southeast Iran, coughing and clearly in severe pain. In another, a woman lies face-down on the floor of a Metro station while bystanders give her a wide berth.

It comes as distrust grows over the Iranian government’s alleged cover-up of the pandemic, with fears that the death toll may be five times as high as reported.

Ambulance records handed to MailOnline show that three Iranian employees of the Chinese embassy in Tehran were hospitalised with suspected covid-19 symptoms on January 28.

It wasn’t until three weeks later, on February 19, that Iran’s first covid patient, a merchant, was officially identified in Qom, about 100 miles south of Tehran.

Activists accused the Iranian leadership of hushing up the earlier cases, in order not to embarrass the Chinese. Tehran relies heavily on Chinese support as US sanctions continue to bite, they said.

But an Iranian government spokesman hit back, claiming that the embassy workers, who had high fevers and severe coughs, did not have coronavirus. They have since been discharged from hospital. 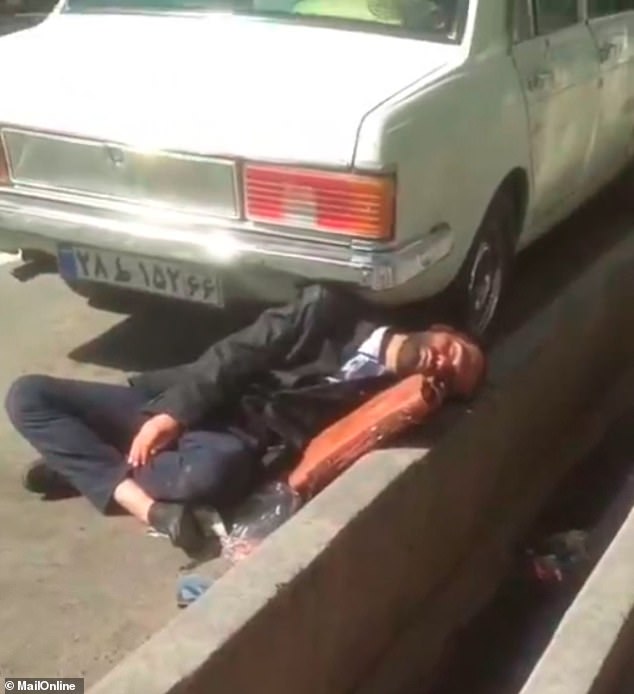 An unconscious man slumps by the side of the road in Khorasan Square, Tehran 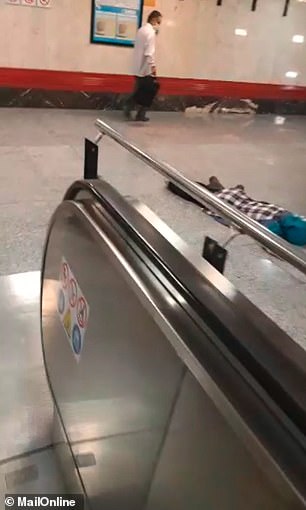 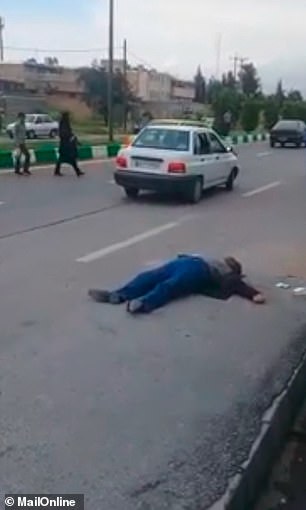 A woman collapses on the floor of Shahid Mahallati Metro station in Tehran, left, while a man lies unconscious in the middle of the street in Tehran 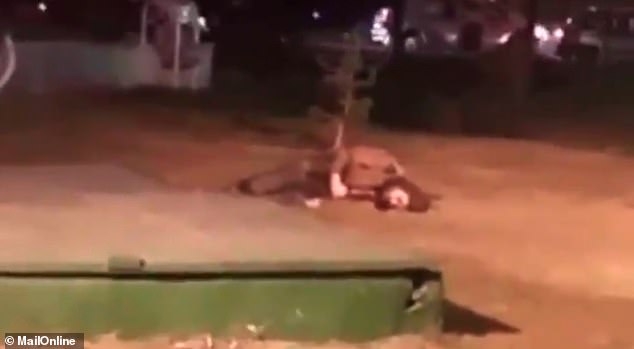 A woman lies unconscious under a tree in Tabriz, northwestern Iran, with suspected covid-19

The leaked ambulance records were handed to MailOnline by the National Council of Resistance of Iran (NCRI), a network of anti-regime activists.

The controversial group made headlines in 2002 when it revealed key details of Tehran’s nuclear programme. It has gone on to leak intelligence regularly, though this has not always been reliable.

The NCRI estimates that deaths from the virus in Iran exceed 43,800 across 320 towns. By contrast, the Iranian government claims that only 7,417 citizens have died from the virus so far.

According to the ambulance service records, or ‘115 forms’, three Iranian employees of the Chinese embassy in Tehran were taken to hospital on January 28 with symptoms of covid-19.

The patients included a 37-year-old woman and two 33-year-old men, one of whom had recently visited China.

One of the first responders’ reports said: ‘[The patient is] 33-years-old, with severe coughing, symptoms of cold.

‘He says he was in China for the past 12 days, and in the first three days after arriving in Tehran, he had high fever, diarrhoea, and severe coughing.

‘He says he works at the Chinese Embassy (in Tehran), and his colleagues have had symptoms of coronavirus. He is hospitalised.’ 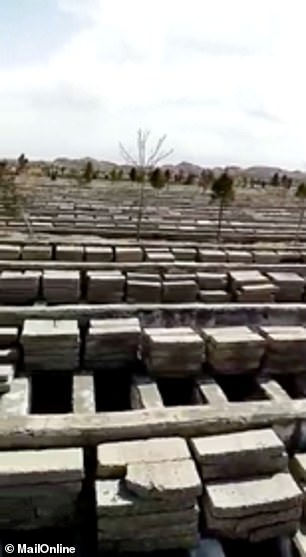 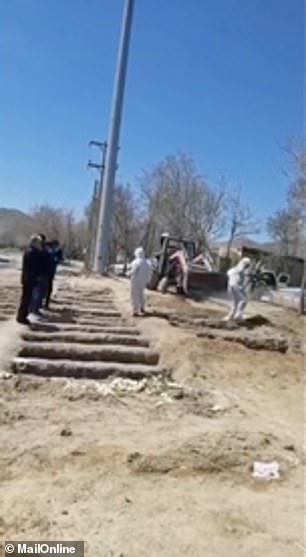 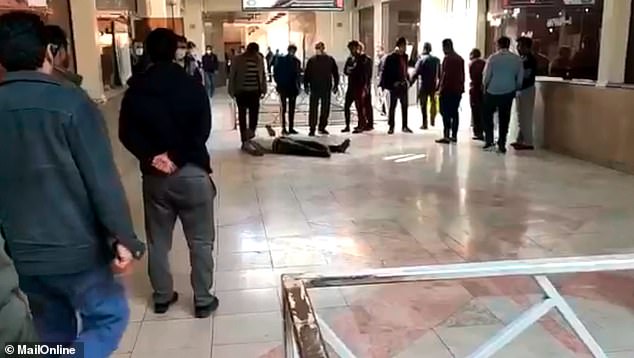 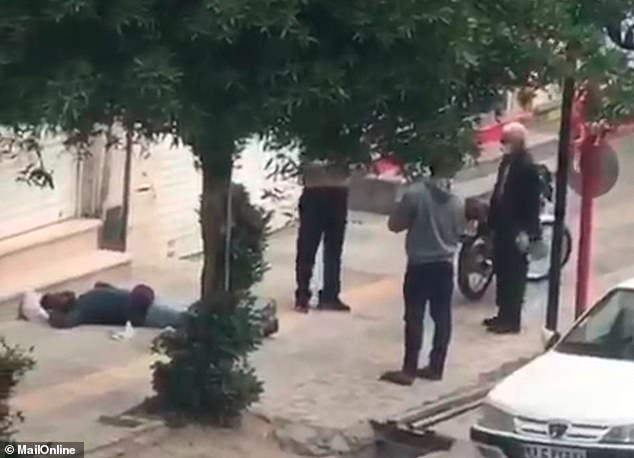 A man lies unconscious on the pavement while passers-by look on in Bushehr, Iran 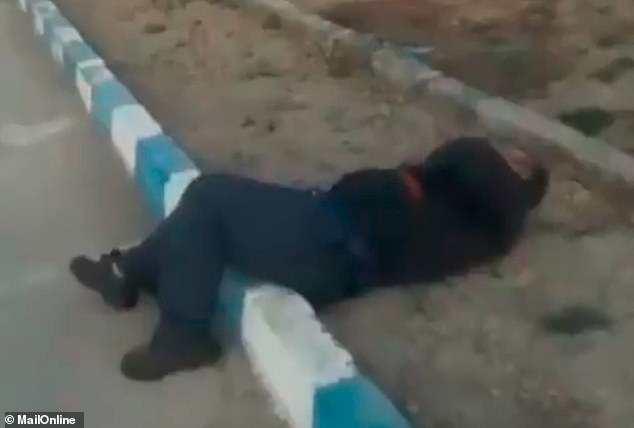 A man collapses coughing in the street in Zahedan, Iran, amid suspicions he has covid-19

Other ambulance records show that a 33-year-old woman was rushed to hospital with symptoms of covid-19 on January 31, after leading a tour of Chinese nationals. She had fallen ill at Imam Khomeini Airport in Tehran.

A spokesman for the Iranian government said: ‘The patients seem to have left the hospital later, as it was proved that the cases were not coronavirus. There are no other records. Statements by patients at the admission stage, before tests, may not be used as proof for any disease.’

Iran has been at the centre of the coronavirus pandemic in the region. In reacting slowly to the threat, and failing to clamp down on air links with China, the leadership has been accused of prioritising its partnership with China over public health.

Disturbing videos show vast coronavirus cemeteries in Tehran, Qom and the western city of Arak, as well as footage of a covid-19 victim being hurriedly buried by uniformed men under cover of darkness.

Experts have accused Iran of a huge cover-up of the scale of the coronavirus pandemic in the country.

David Patrikarakos, non-resident Fellow at the School of Iranian Studies at the University of St Andrews, told MailOnline:

‘Iran is incredibly reliant on China, especially since the re-imposition of US sanctions. So the regime would not do anything to embarrass the Chinese government.

‘Admitting that there was coronavirus within the Chinese embassy in January would have done just that, so it would be no surprise if Iran covered it up.’

He added: ‘Since the beginning of this crisis, Iran has been very reluctant to tell truth to its own citizens. That is because the regime has some culpability because it was so slow to respond.’ 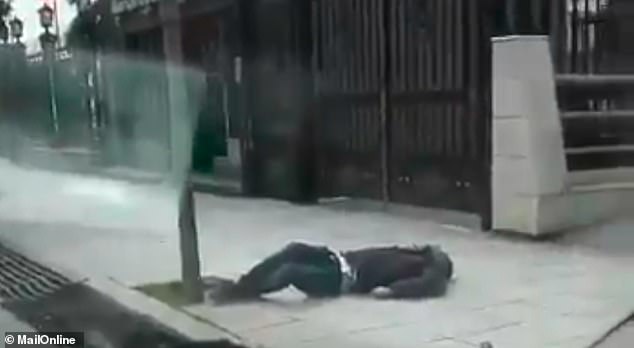 A man lies on the pavement in Sari, northern Iran, with a case of suspected covid-19

Several universities have modelled the true scale of the coronavirus pandemic in Iran. Experts at Massachusetts Institute of Technology (MIT) said that covid-19 deaths had reached 15,485 by the end of March, and would hit 58,000 in June.

Shahin Gobadi, an NCRI spokesman, said: ‘The Iranian regime is engaged in a massive cover-up regarding the spread of the coronavirus.

‘They have been extremely under-reporting the death toll, because the staggering figures would demonstrate their incompetence, ineptitude, mismanagement, and negligence both in terms of disseminating the relevant information in a timely manner and in providing medical care and treatment to those in need of help.’

The NCRI is connected to a group called the People’s Mujahedin Organization of Iran, or the Mujahedin-e Khalq (MEK). It has a radical Marxist-Islamist background and its critics have called it ‘cult-like’.

The group was placed on a terror list by Britain and the United States until the last decade, when it reformed its approach to appeal to European hearts and minds.

The Iranian leadership rejected all criticism from the dissidents, insisting that its handling of the crisis was transparent and responsible.

A spokesman said: ‘There are lot of conspiracy theories around the source of covid-19, including some in Britain about 5G. It is unfortunate that some have engaged in blame game to advance certain political aims, when nations should work together to combat and eradicate such a vicious virus.

‘Iran, as the hub of medical tourism in West Asia, benefits from the best health service in the region. Official figures by this service continue to be the most credible source for information about covid-19 in Iran.

‘Iran and China have helped each other in the fight against the disease, despite the inhuman US sanctions on drugs and medicine. These continue despite global requests for its removal to help Iran’s health service combat the virus more efficiently.’