On Sunday, the Iranian rial plunged to a low of 111,500 against one U.S. dollar on the unofficial market, down from about 97,500 rials on Saturday, according to foreign exchange website Bonbast.com.

The rial has lost about half of its value since April because of a weak economy, financial difficulties at local banks and heavy demand for dollars among Iranians who fear the effects of sanctions.

The government last week replaced the country’s central bank governor Valiollah Seif, whose policies have also been blamed for the rial’s fall, and eased regulations on bringing foreign currencies into the country to combat black market trading.

In May the United States pulled out of a 2015 deal between world powers and Tehran under which international sanctions on Iran were lifted in return for curbs on its nuclear program.

Washington decided to reimpose sanctions on Iran upon its withdrawal, accusing it of posing a security threat, and has told countries they must halt all imports of Iranian oil from Nov. 4 or face U.S. financial measures.

President Donald Trump has called the agreement one of the worst deals ever negotiated but in a bid to salvage the accord, Iran’s European partners in the nuclear deal are preparing a package of economic measures to offset the U.S. pullout.

However, France said earlier this month that it was unlikely European powers would be able to put together an economic package for Iran that would salvage its nuclear deal before November. 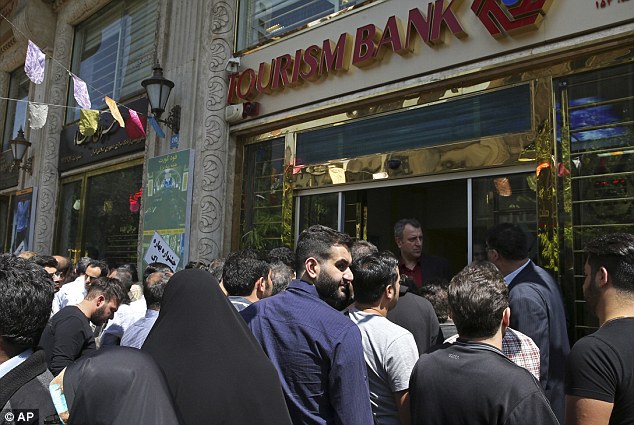 Iranians stand in front of a bank, hoping to buy U.S. dollars at the new official exchange rate announced by the government, in downtown Tehran on April 10, 2018

On Aug. 7, the United States will reimpose sanctions on the purchase or acquisition of U.S. dollars by the Iranian government, Iran’s trade in gold and precious metals, and on the direct and indirect sale, supply and transfer to or from Iran of graphite, raw or semi-finished metals, coal and industrial-related software.

Sanctions also will be reapplied to the importation into the United States of carpets and foodstuffs made in Iran, and on certain related financial transactions.

Iran’s oil exports could fall by as much as two-thirds by the end of the year because of the new U.S. sanctions, putting oil markets under huge strain amid supply outages elsewhere in the world.