An Iraqi court has today condemned a fourth French citizen to death for joining the Islamic State group, as the verdict for a fifth man was postponed after he testified to being tortured.

Mustafa Mohammed Ibrahim, 37, was given a sentence of death by hanging, according to an AFP journalist for a second day of sentencing.

Yesterday, the court handed capital punishments to three other Frenchmen on trial for supporting the extremist terror group.

Security guards stand outside the building where Islamic State militants are being tried in a special counterterrorism court in Baghdad, Iraq. Four have been sentenced to death

France, meanwhile, said the Iraqi court has jurisdiction to rule in the cases, though a spokeswoman reiterated the French government’s opposition to the death penalty.

France’s foreign affairs spokeswoman Agnes Von der Muhll said France’s position is that adults detained in Iraq must be tried by the Iraqi justice system, as soon as it declares itself competent.

‘France respects the sovereignty of Iraqi authorities’ she added, though she expressed her country’s opposition to the death penalty, ‘in principle, at all times and in all places.’

The trials come as questions swirl about the legal treatment of thousands of foreign nationals formerly with the extremist group.

The Frenchmen on trial are among 12 French IS fighters whom the US-backed Syrian Democratic Forces handed over to Iraq in January.

The Kurdish-led group spearheaded the fight against IS in Syria and has handed over to Iraq hundreds of suspected IS members in recent months. 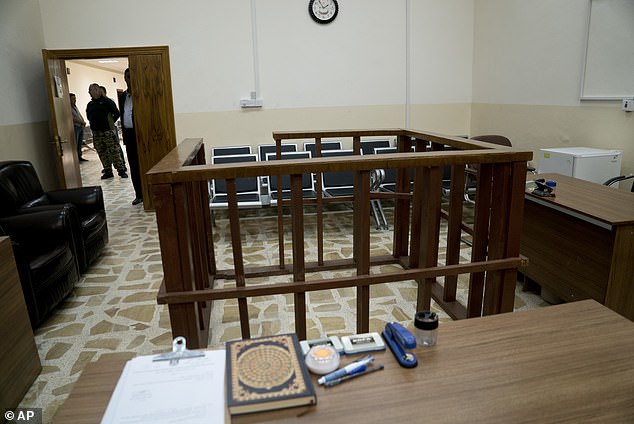 The defendant’s cage in an empty courtroom at Nineveh Criminal Court, one of two counterterrorism courts in Iraq where suspected Islamic State militants and their associates are being tried 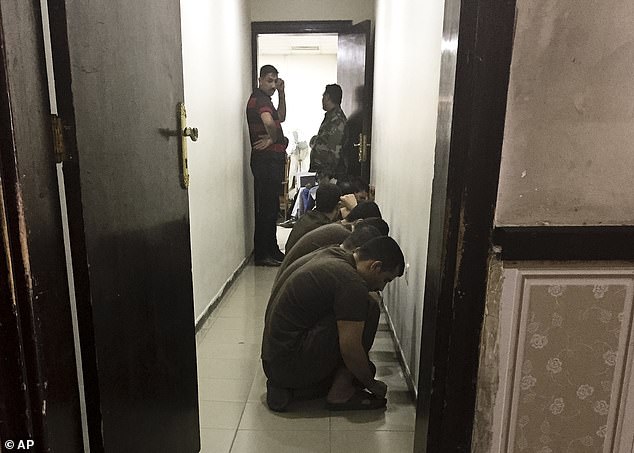 As Monday’s proceedings opened, the first to appear was Mustafa Mohammed Ibrahim, 37, from the Mediterranean city of Nice. Ibrahim, of Tunisian origin, with short hair and a light beard, walked in the courtroom wearing a yellow prison uniform with ‘Reforms Department’ printed on the back in Arabic

‘I ask for forgiveness from the people of Iraq and Syria and the victims,’ Ibrahim said before Judge Ahmed Mohammed ordered he remove his top in order to see if there were any signs of torture on his body. None were visible.

‘No matter what the sentence will be against me I want to go back to my country,’ said Ibrahim. He added that he used to work as a driver back in France before joining IS.

The judge sentenced Ibrahim to death.

The second man brought into the courtroom was identified as Fadil Hamad Abdallah, 33, of Moroccan origin.

Abdallah said he was subjected to torture while in detention and the judge referred to him to a medical committee for investigation and postponed his next session until Sunday.

The judge also postponed the sentencing of three other Frenchmen until next Monday.