Job done. All roads lead to Paris next Saturday night and a shot at the Six Nations title.

Ireland needed a bonus-point win here to stay in the hunt on the final weekend of this truncated championship. It wasn’t perfect. Far from it, but they will have a say on Super Saturday.

They’ll need a win in a city where they have tasted success just three times in 20 years – and will probably need four tries on top of that as well. Easier said than done but they know what it is required. 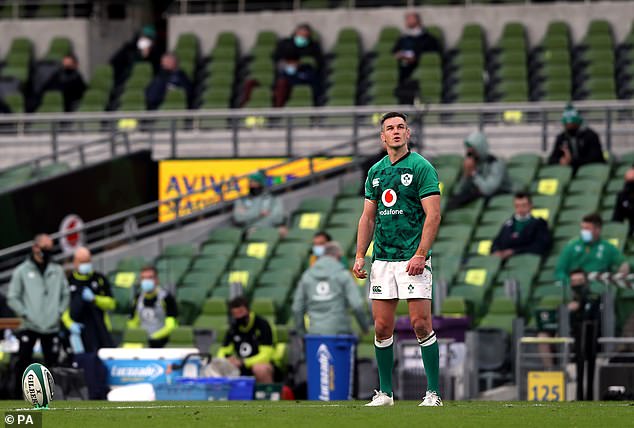 Johnny Sexton scored a try, got five conversions as well as a penalty on a good day for Ireland

Ireland were always going to be a bit rusty on their first outing in eight months and there were plenty of errors, indiscipline and sloppiness throughout, but there was plenty to like as well. Not least the performances of Will Connors and Hugo Keenan – the two new caps.

Connors went home with the man of the match award while Keenan went away with a brace of tries. He could and probably should have had a hat-trick.

Andy Farrell is likely to stick with this backrow where Connors shone along with CJ Stander and Caelan Doris, who were industrious and powerful.

The visitors were up against it yesterday. They always are. This was the 21st meeting between these two sides since the Italians joined the championship in 2000. Ireland have come out the winning side of this clash on 19 occasions – the sole loss occurring in March 2013 when Declan Kidney’s side suffered a spate of injuries in Rome. 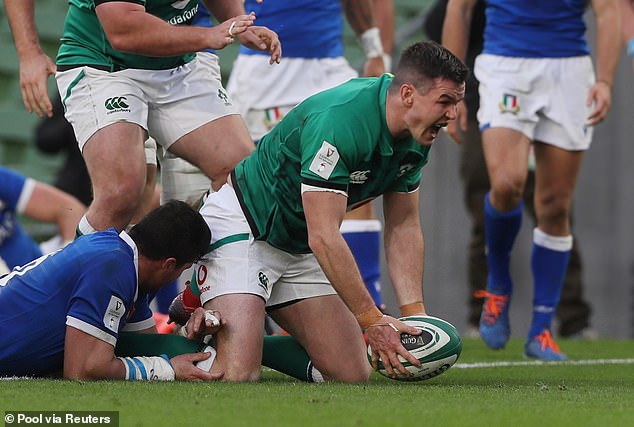 Sexton celebrates scoring a try, as Ireland took the lead in the 2020 Six Nations title race

Italy have claimed just a solitary win in the Six Nations since that historic victory seven years ago. They had a 20-year-old in Paolo Garbisi running the show at No10. It seemed a tall order for a player with just three Pro14 games under his belt, especially with such a callow front five in front of him.

We had pyrotechnics and ‘Dropkick Murphys’ blaring out over the PA system as both sides made their way onto the field. A stony silence followed soon after. We’re never going to get used to this. We even had socially distanced national anthems. No shoulder to shoulder today. Strange times, indeed.

Ireland didn’t get off to the best of starts. Italy’s burly flanker Sebastian Negri cutting a line between Johnny Sexton and Stander before offloading to the onrushing Marcello Violi. Conor Murray got back to bring down his opposite number but referee Matthew Carley felt the Munster scrum-half illegally slowed the whole thing down. Murray was sent to the bin for 10 minutes meaning a cameo for Garry Ringrose at the base of the scrum. 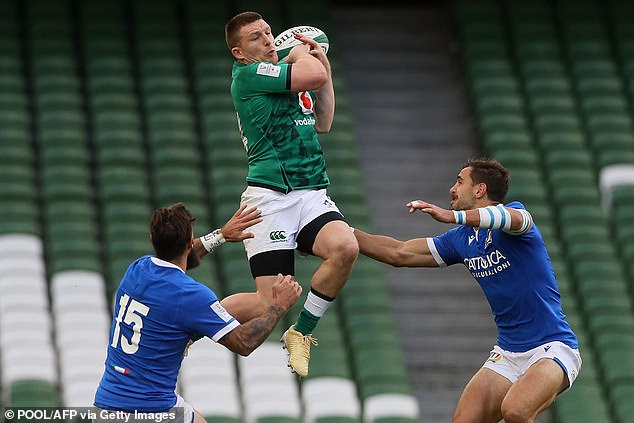 He looked a natural there with a host of sniping runs laying the platform for Stander to barge over for Ireland’s opening try. Johnny Sexton settled things down soon after with a 14th-minute penalty. The hosts would lose Ringrose to a HIA soon after with Robbie Henshaw entering the fray to link up with his old Connacht mate Bundee Aki in midfield.

Aki was making his presence felt. The lack of spectators lets you hear the centre in full voice on the pitch.

He had a point. Andrew Porter was immense here. The power he brings is hard to ignore. It would seem like an awful waste of resources when Tadhg Furlong returns to full fitness that Porter would revert to back-up duties at tighthead. 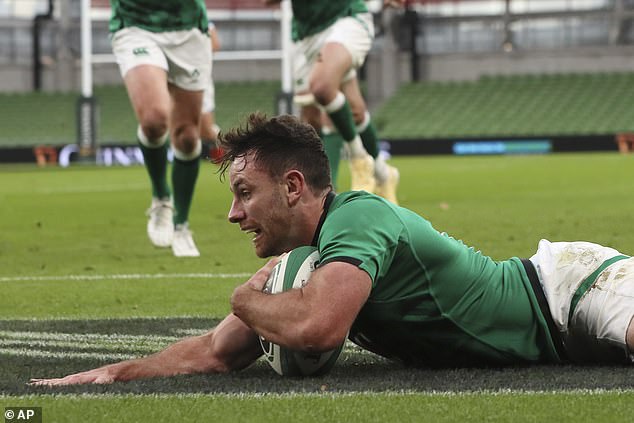 Ireland’s Hugo Keenan touches the ball down, but his try was later disallowed

Porter, after all, was a loosehead all the way through the age grades before the IRFU – looking at the long-term picture – facilitated a shift to tighthead. It seems unlikely but the prospect of rolling out Furlong and Porter together would seem like a logical move heading towards the next World Cup.

Keenan and Connors are likely to be major players by the time that tournament in 2023 comes around. Keenan had his first try after 30 minutes, showing his instinctive finishing ability to ride two tackles and scorein the corner after a nice work from Aki and Henshaw in the build-up.

Go back another few phases before that and you would have seen Connors and Keenan chasing down Jayden Hayward, hitting the Italy full-back before counter-rucking feverishly to win the subsequent penalty. Tougher days will come for this pair but Ireland’s pair of debutants look made for this level. 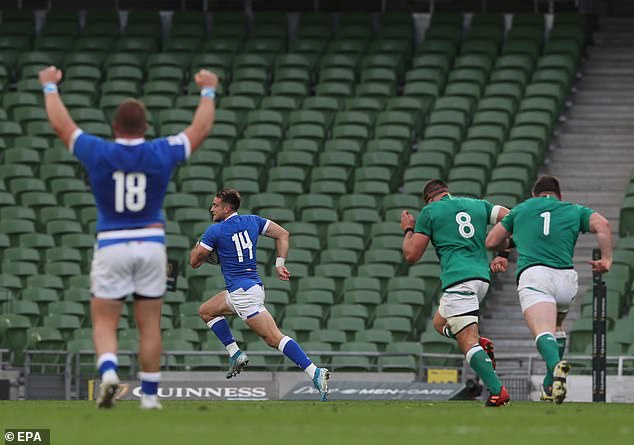 Keenan looked to have bagged a brace in as many minutes when Jacob Stockdale split the Italian defence on the counter before sending the Leinster rookie racing away. That score was chalked off due to some obstruction from James Ryan. Looked like a harsh call, that.

He wouldn’t be denied a few minutes later, however. Keenan got the score but it was the work of Doris – with the turnover and surge out of defence – and Murray with the support line and kick to spot the Ireland wing in miles of space which were the catalysts. 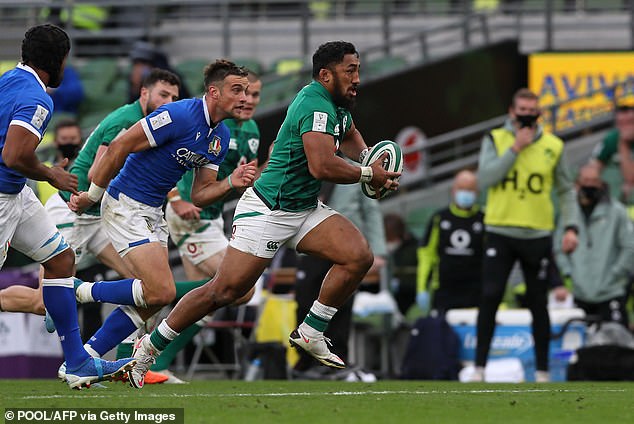 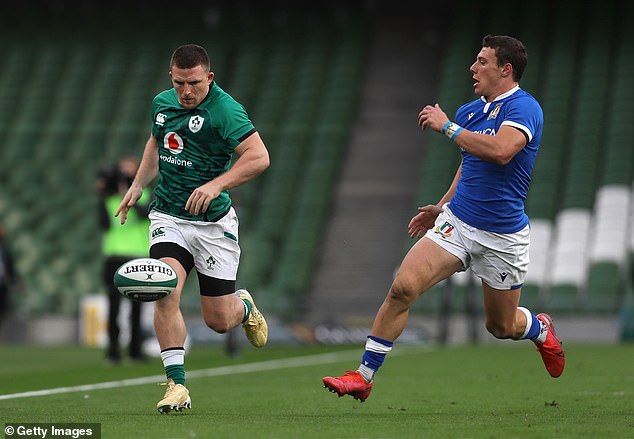 Having a 24-3 half-time lead in the bank, the plan for the second half was clear: secure the bonus-point try and start racking up the scores.

Andy Farrell will be liveid about that listless third quarter. The hosts needed to be ruthless ahead of next Saturday’s race for the title, Instead, they handed a try to Edoardo Padovani who read Sexton’s pass with ease to race away under the posts untouched.

Sexton atoned by finishing off a sweeping move to crash over the line before Aki ran onto a brilliant offload by Peter O’Mahony – just off the bench – as the floodgates opened. Dave Heffernan – another half-time replacement – touched down in the dying minutes as Ireland breached the 50-point mark.

Every point counts now. On that note, letting Garbisi in for the softest of scores in the dying seconds may come back and haunt them.