Michael D Higgins, and his wife Sabina, along with government representative Minister for Culture, Heritage and the Gaeltacht Josepha Madigan paid tribute to the memory of the Irish men and women who died in the First World War.

Over 47 countries were represented at the service, and officials laid wreaths at the Irish military plot, before The Last Post was played and the Irish flag returned to full mast.

Poetry from the First World War was read by the British, French and German ambassadors to Ireland, before prayer and a minute of silence.

Those present included current and former Defence Forces troops, former president Mary Robinson and family members of some of those who served in both World Wars.

During the ceremony, five Victoria Cross Commemorative plaques were unveiled, dedicated to five soldiers from different ranks who showed extreme bravery during the conflict between 1914 and 1918.

Mr Higgins paid tribute to those who fought in the First World War, in particular, the 200,000 Irish men who served and those who died overseas.

“Ours is not a celebration of militarism, nor a valorisation of martial spirit, but a simple recognition of our common humanity, as we recall the destruction of the promise and potential of a generation in the First World War, the lasting damage inflicted on the millions wounded and maimed, and the countless others who would go on to suffer mental anguish as a result of the horrors of their war experience,” he said.

“Despite all the differences of religion, class and political aspiration, they were united by what would be a shared experience of war, with its comradeship, friendship and shared hardship whether it was on the Western Front, at Gallipoli, or in the Middle East.” 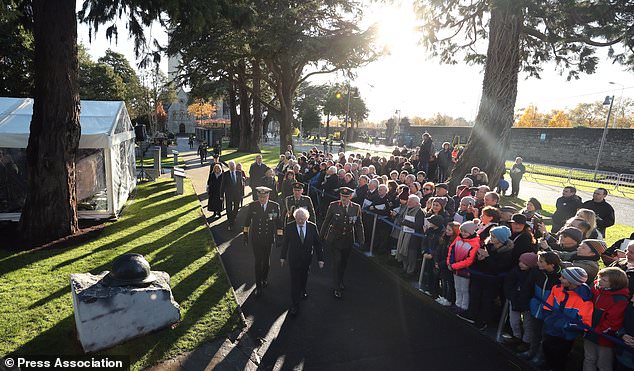 Mr Higgins added that the world today had “the material capacity to abolish all forms of human poverty, to alleviate all unnecessary suffering, we are still devoting so much of our creativity, not to the preservation or achievement of peace, but to the prosecution of and preparation for war”.

“Amidst great human suffering, some nations now seek to embark upon a new arms race, increasing not only their own stockpiles, but exporting weapons of death and destruction to fuel the fires of war in other lands, in Yemen, in Syria, and in the Democratic Republic of Congo,” he said.

Minister Madigan reflected on those who had perished in the conflict, and the lost potential of those who served.

“Over the past four years, we have explored, with respect and compassion, the differing motivations of those from this island, of all traditions, who lost their lives – we will never know how they would have contributed to this land, had they not died before their time,” she said.

The commemoration took place at 9am, hours before Mr Higgins was to be inaugurated for his second term as President of Ireland.

This year, the date of the inauguration coincided with the centenary of the end of the First World War, and the Constitution of Ireland stipulates that the President of Ireland is inaugurated on the day following the expiry of the term of office of the preceding president.