Irma is now a category 2 hurricane, with winds of 100mph

The newly upgraded Hurricane Irma – currently heading westward over the Atlantic Ocean – is now at category 2 strength and is ‘rapidly intensifying’ the National Weather Service has warned.

Irma moved from a tropical storm to a hurricane overnight after winds picked up speed as it moved inland – and it’s still not clear whether it will strike the US.

Having been upgraded from a tropical storm, Irma is officially now a category 2 hurricane, with maximum wind speeds of 100mph – and it’s expected to become stronger as time goes on 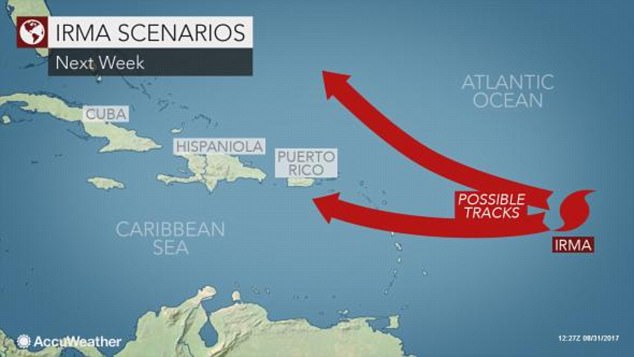 It will take Hurricane Irma a week to cross the Atlantic – at which point it could either head north-west toward the Carolinas, or west and strike Puerto Rice and its neighbors

‘All interests in the eastern Caribbean will need to monitor the progress of this evolving and likely dangerous tropical cyclone.’

Hurricanes are ranked on a sliding scale from 1 – the weakest – to 5. A Category 2 hurricane has wind speeds of 96-110 miles per hour.

Irma is currently located about 1,845 miles east of the Leeward Islands with maximum sustained winds of 100 mph.

It is presently moving toward land at around 10mph.

As storms pick up wind speeds, they increase from tropical depressions to hurricanes. In increasing order, the categories are:

That’s a considerable increase from Wednesday’s midday peak of 60mph winds – at which point it was declared a tropical storm. It wasn’t initially projected to reach hurricane speeds until later Thursday.

It will take at least a week for Irma to make it across from the far eastern Atlantic and reach land – increasing in speed and danger as it does so.

It has two possible tracks at this point. One would take it north-west in a curve, away from land but in the general direction of the US mainland, meaning landfall on North and South Carolina is possible.

The other would see it striking Puerto Rico and the Hispaniola Island countries of the Dominican Republic and Haiti.

‘Steering winds will guide Irma close to the Leeward Islands and then perhaps Puerto Rico and Hispaniola around the middle of next week,’ AccuWeather Meteorologist Brian Thompson said.

National Oceanic Atmospheric Administration forecasters said the Atlantic Ocean’s 2017 hurricane season will likely be above normal, with 11 to 17 named storms, five to nine hurricanes and two to four major storms.

In Houston, Texas, residents are beginning the grim search for bodies and survivors, as floodwaters from Hurricane Harvey continue to recede. 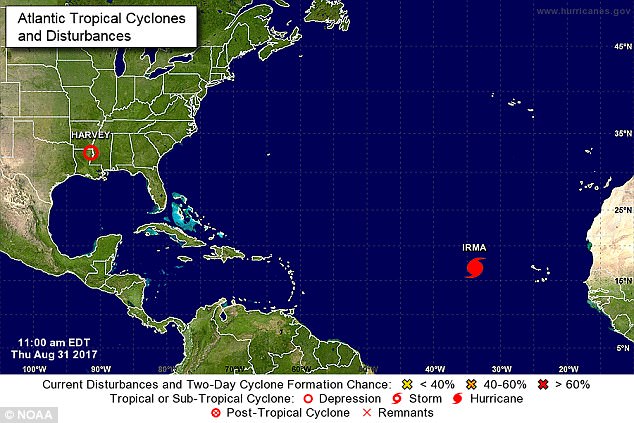 Hurricane Irma still has some way to travel before it makes landfall, but it’s expected to grow in strength. It’s currently moving westward at 10mph

The official death toll across the entire Gulf Coast region is currently 38 but it is likely to become exponentially higher as the bodies of the dead are recovered.

Corpses were seeing floating in the on Wednesday and many more are feared to be inside homes which have been inaccessible until now.

Texas Governor Greg Abbott warned residents that it will take months for the state to recover from its devastating floods.

‘The worst is not yet over as far as the rain goes for southeast Texas. There’s more to come,’ he said at a press conference on Wednesday where he described the catastrophe as being ‘far larger’ than Katrina or Sandy.

In what experts are describing as the worst natural disaster in US history, more than 30,000 people have been left in shelters across the state.

In one area of Houston alone there were another 17 deaths reported on Wednesday.

The cost of the damage, which includes 500,000 ruined cars, is likely to total $160 billion. The Texas Department of Safety revealed on Wednesday that 48,700 homes had been impacted by the floods. 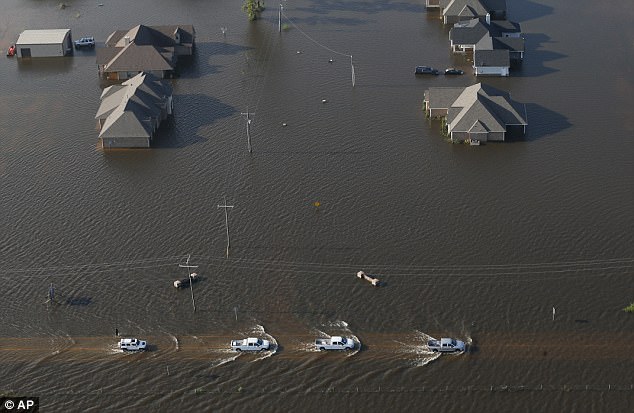 As flood from Harvey waters receded in Houston Thursday, search parties were sent out to look for survivors – and bodies. The death count is now 38 and it’s believed it will rise