Hurricane Maria has landed in Turks and Caicos after lashing Puerto Rico and other Caribbean islands with winds and rain that destroyed homes, flooded streets, crippled economies and left at least 32 people dead.

The storm, which is currently a Category 3 with sustained winds of up to 125 mph, is the second major hurricane to hit the Turks and Caicos this month after Irma swept through and caused mass destruction.

Maria is currently the strongest storm to hit the US territory of Puerto Rico in over 80 years. It knocked out all power lines and caused record flooding throughout the island.

At least 15 people were killed in Puerto Rico, El Nuevo Día newspaper reported, though the island’s Governor Ricardo Rossello told CNN he had reports of at least 13 people on the island being killed.

Hurricane Maria has landed in Turks and Caicos after lashing Puerto Rico and other Caribbean islands with winds and rain that destroyed homes, flooded streets, crippled economies and left at least 32 people dead 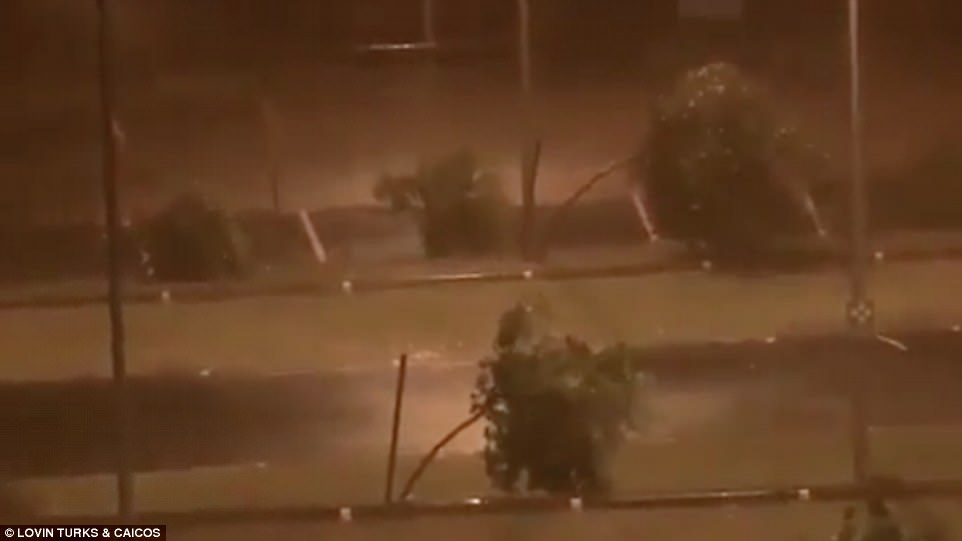 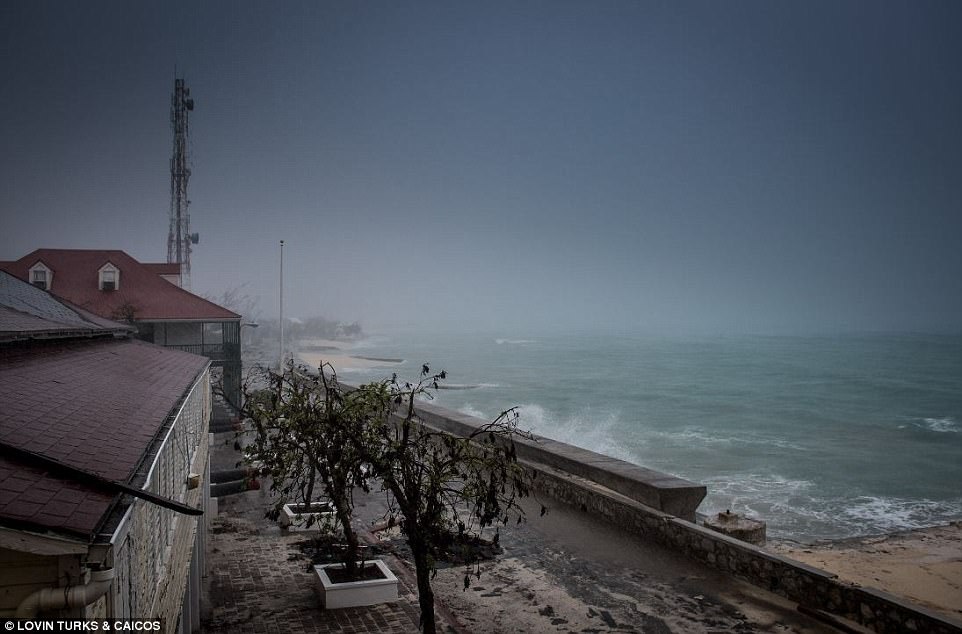 Between eight and 16 inches (20 to 40 cm) of rain was expected on Turks and Caicos, which could cause flash floods and mudslides, the National Hurricane Center said 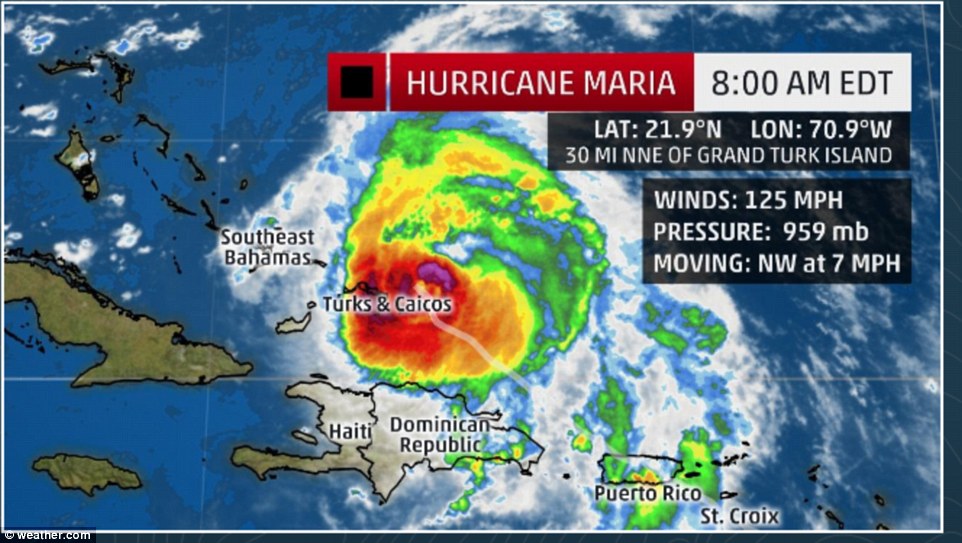 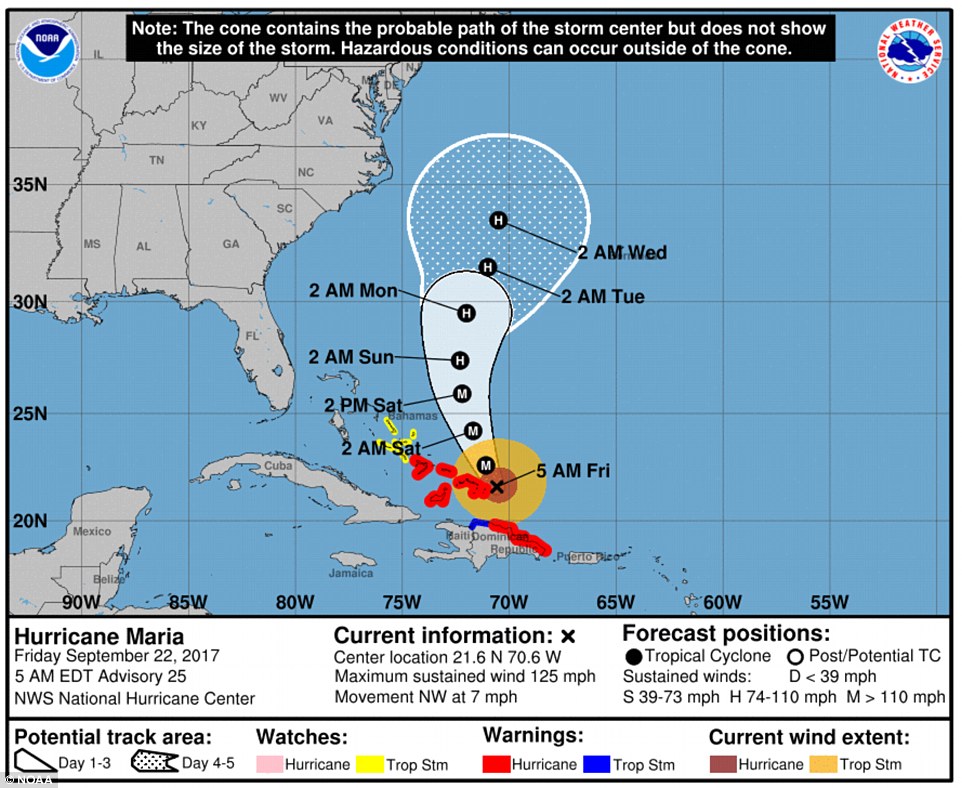 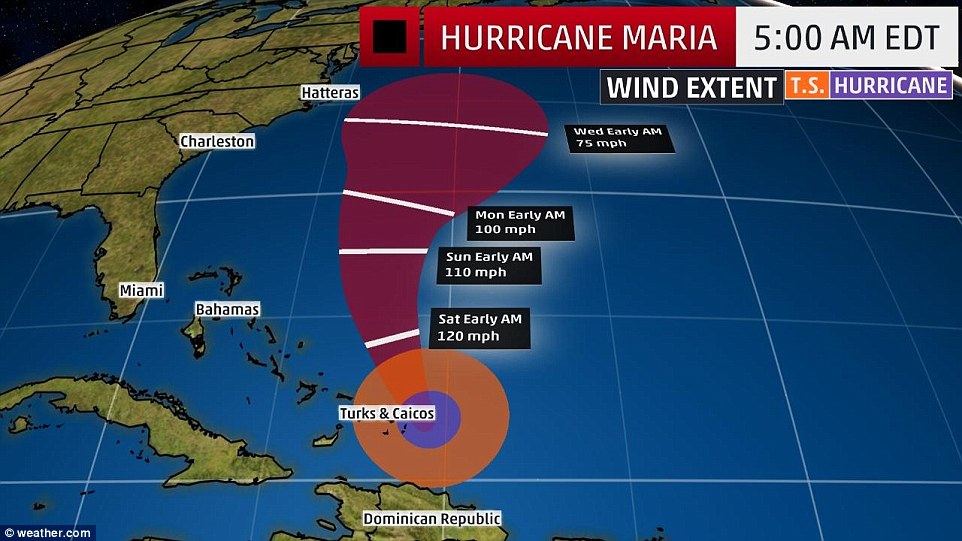 The governor said the storm was a ‘major disaster’ for the island.

‘We have a lot of flooding,’ he said in the interview, adding there ‘was a major disaster here in Puerto Rico.’

Fourteen deaths were reported on the island nation of Dominica, which has a population of about 71,000. Two others were killed in the French territory of Guadeloupe and one on the US Virgin Islands.

The death toll in the Caribbean is likely to rise as searches continue through Friday morning and afternoon.

Maria is forecast to bring storm surges of up to 12 feet to the southeastern Bahamas and the Turks and Caicos on Friday – though it is expected to weaken gradually throughout the next 48 hours as it heads further north in the Atlantic Ocean.

Between eight and 16 inches (20 to 40 cm) of rain was expected on Turks and Caicos, which could cause flash floods and mudslides, the National Hurricane Center said.

Maria looked unlikely to hit the continental United States but its storm swells will reach the southeastern coast from Friday, the NHC said.

‘These swells are likely to cause dangerous surf and life-threatening rip currents along the coast for the next several days,’ it said.

Utility crews from the US mainland headed to Puerto Rico to help restore the power grid and the US military sent ground forces and aircraft to assist with search and rescue.

More than 95 percent of wireless cell sites were not working on Thursday afternoon on the island, the US Federal Communications Commission said. In the US Virgin Islands, more than three-quarters of cell sites are out of service. 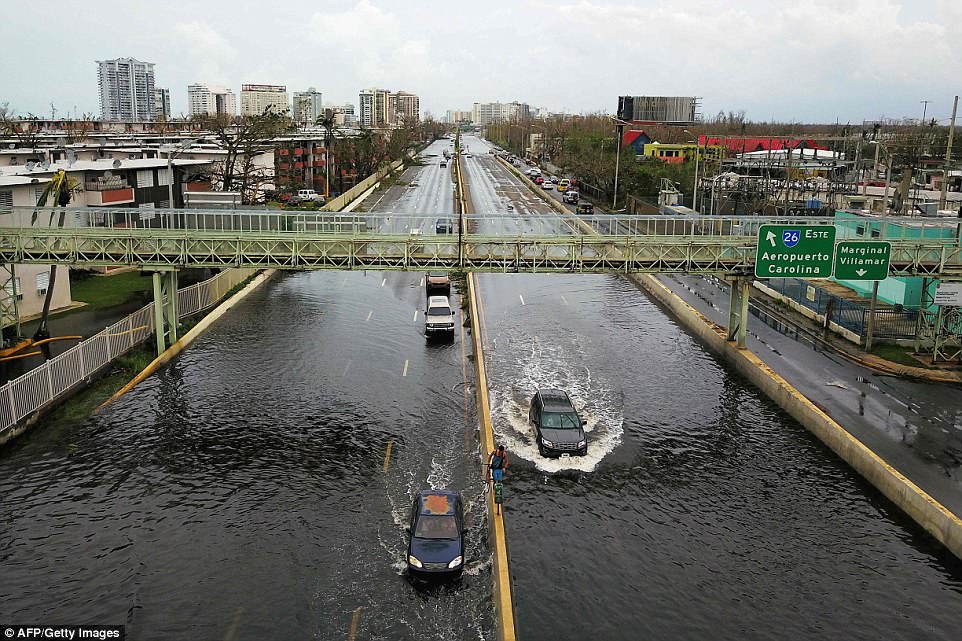 Ravaged: Cars try to drive through deep flood water on a main road on San Juan, Puerto Rico. The island has been warned to brace for yet more downfalls 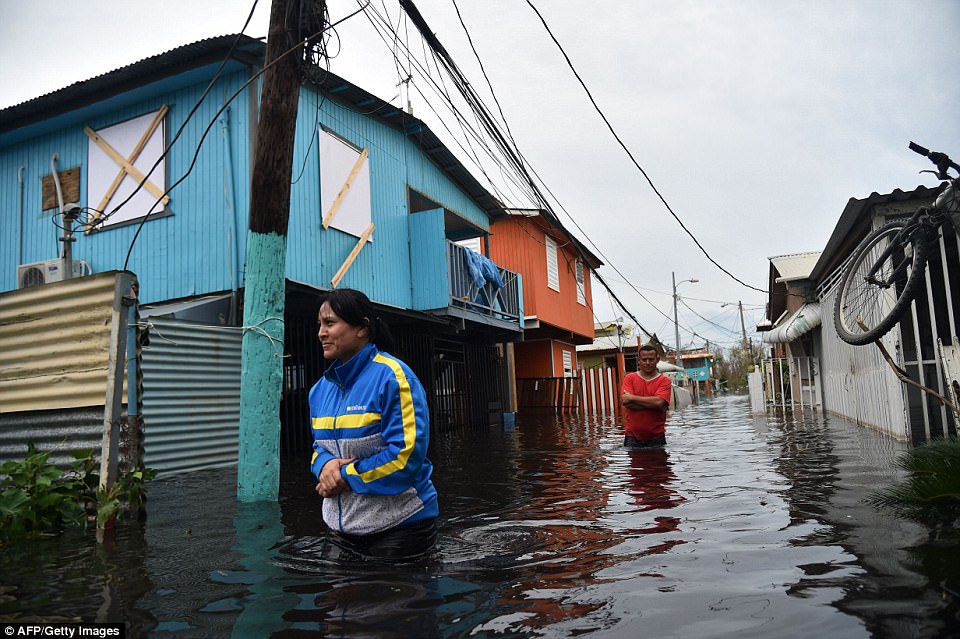 Residents of Juana Matos, Puerto Rico, wade through waist-high water on Thursday after their community was battered by Hurricane Maria – and more misery is to come for them 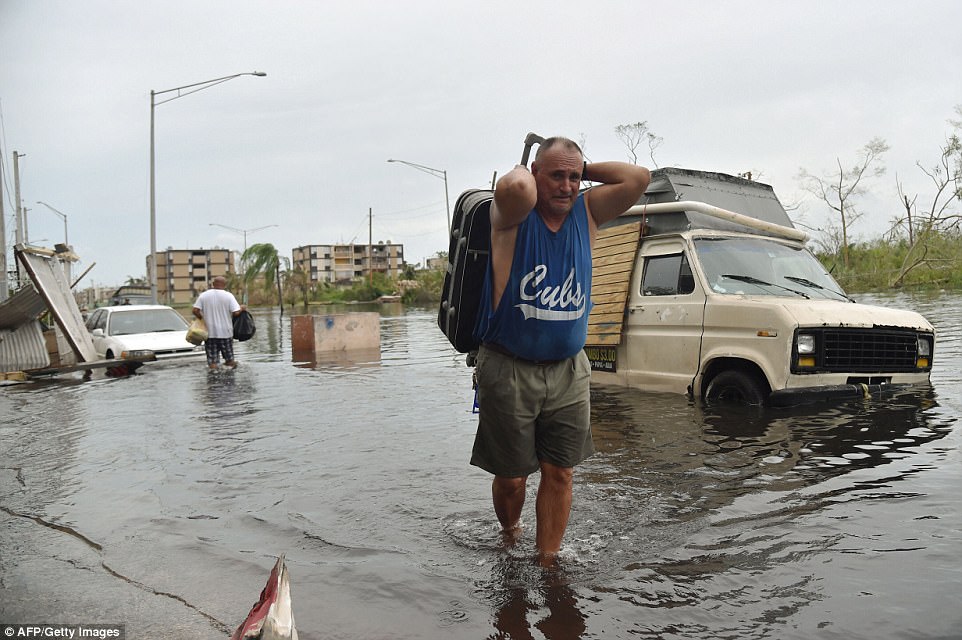 The streets of Juana Matos, Catano in Puerto Rico were already flooded on Thursday after Maria dumped 35 inches of rain onto the island – and now a further 38 inches of rain is expected to fall as Maria’s tail sweeps over it 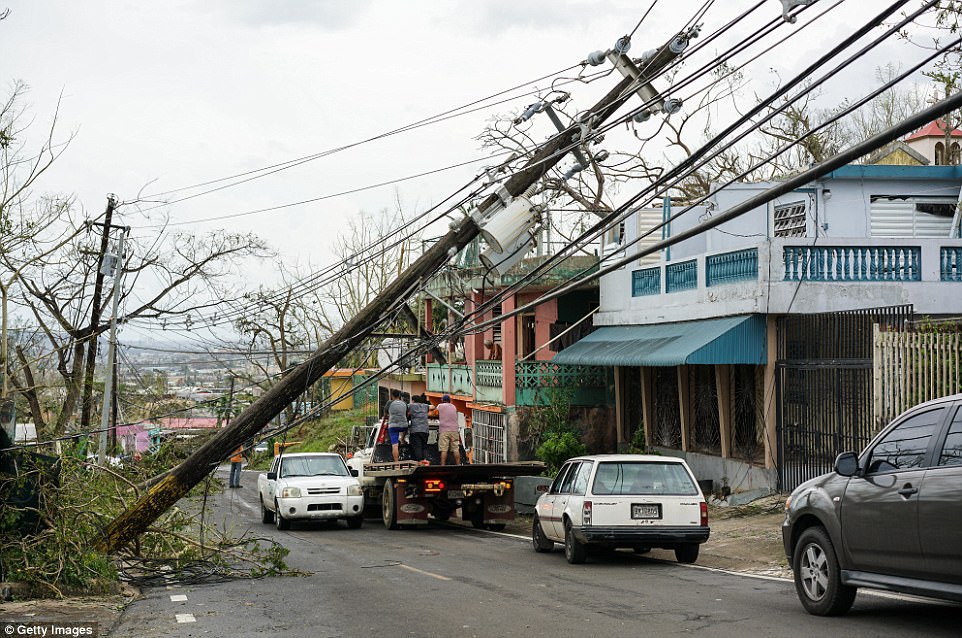 Hazard: Motorists drive past a power line which toppled down during Hurricane Maria near Santa Elena in Puerto Rico

A dusk-to-dawn curfew has been imposed over all of Puerto Rico, and will last through Saturdya.

So far, Governor Rossello said about 700 people have been rescued from floodwaters, but millions more could still be in danger because communication was difficult with the southeastern part of the island.

The storm was expected to bring as much as 40 additional inches of rain and an island-wide flash flood watch is in effect.

Among those killed in Puerto Rico were eight people who drowned in Toa Baja, about 20 miles (32 km) west of San Juan, Mayor Bernardo Márquez told the newspaper.

Three elderly sisters were killed by a mudslide on Wednesday in the mountainous central municipality of Utuado, El Nuevo Día said, citing relatives and the mayor of Utuado.

In the heart of the island’s capital San Juan, which has a fort and buildings from the Spanish colonial era, the storm left a trail of wreckage. Toppled trees cut power lines and streets were turned into rivers.

US President Donald Trump told reporters the island had been ‘totally obliterated’ and he planned to visit.

Puerto Rico was already facing the largest municipal debt crisis in US history.

A team of judges overseeing its bankruptcy has advised involved parties to put legal proceedings on hold indefinitely as the island recovers, said a source familiar with the proceedings.

In Dominica, Maria damaged about 95 percent of roofs, the UN Office for the Coordination of Humanitarian Affairs said. It struck as a Category 5 storm on Monday, ripping foliage off plants and obliterating the island’s vital agricultural sector. 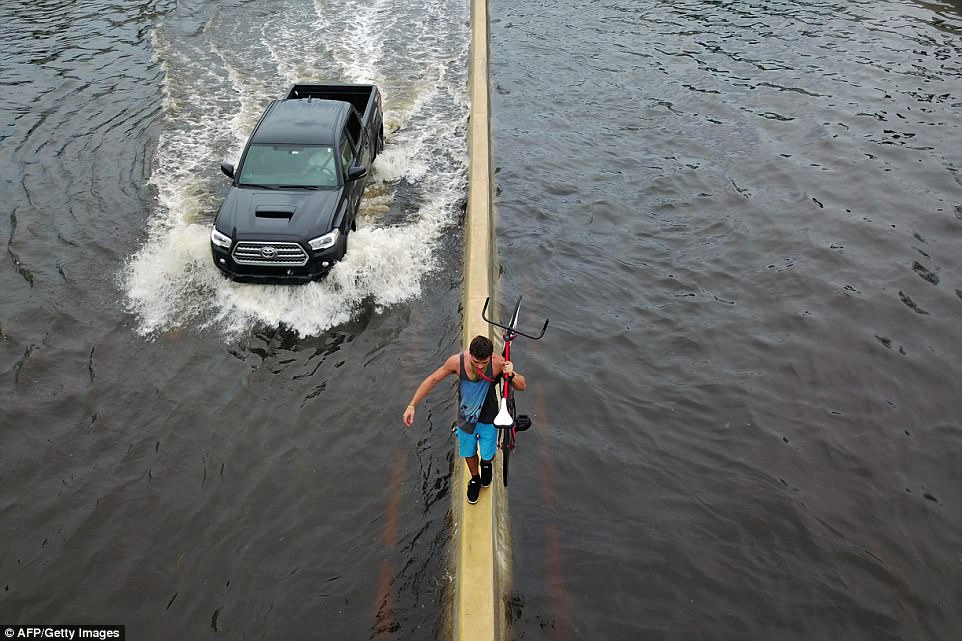 A man walks on a highway divider while carrying his bicycle in the aftermath of Hurricane Maria in San Juan, Puerto Rico 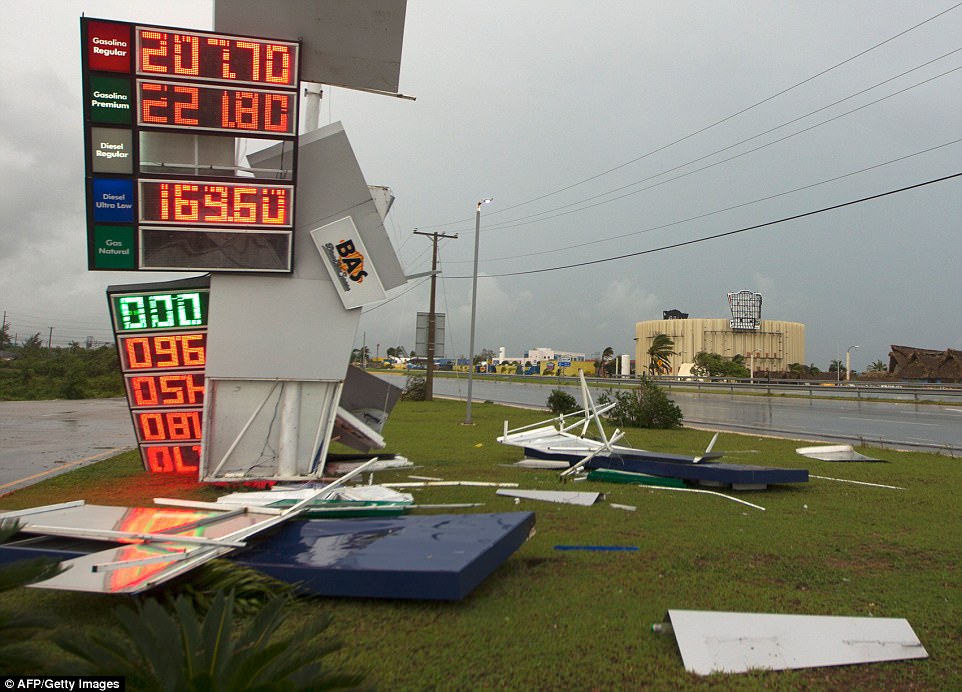 Picture show how signs at a gas station were knocked down by strong winds when Hurricane Maria hit Punta Cana, in the eastermost tip of the Dominican Republic 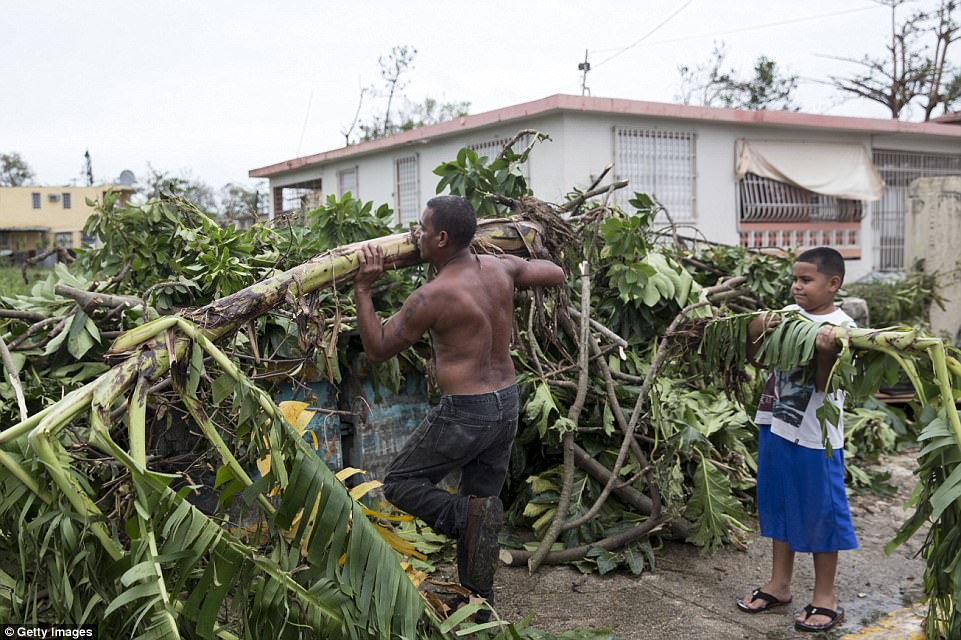 Residents of the Guaynabo suburb of San Juan, Puerto Rico, clear the streets of fallen foliage in the wake of the terrifying onslaught. It could take six months for power to be fully restored to the island 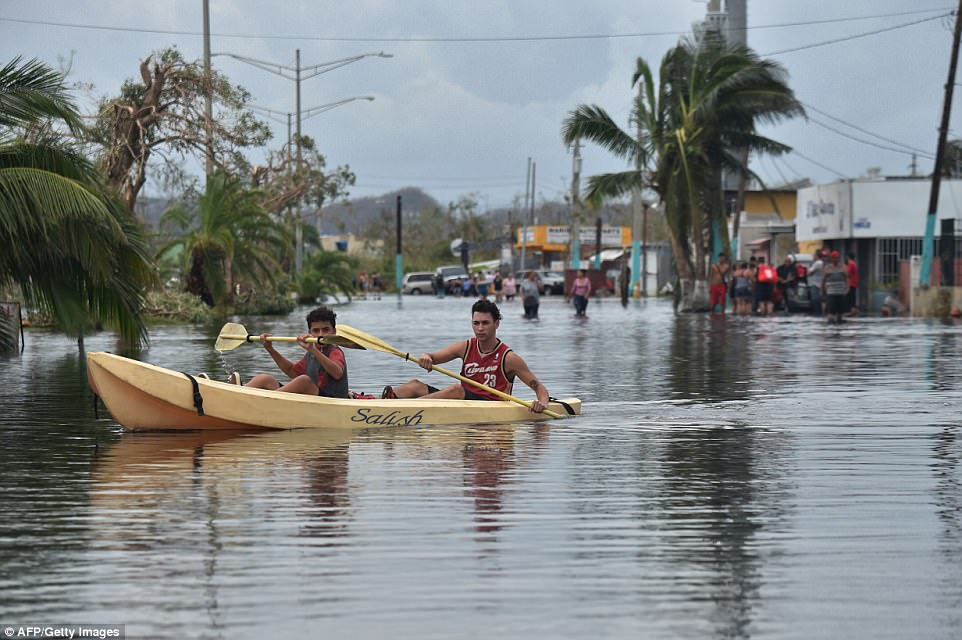 Young people row on a kayak down a street flooded by Hurricane Maria in Juana Matos, Puerto Rico

The storm caused flooding in the Dominican Republic when it passed nearby from Wednesday night.

Maria passed close by the US Virgin Island of St Croix, home to about 55,000 people, early on Wednesday as a Category 5 storm, knocking out electricity and most mobile phone service.

‘The worst is behind us,’ Virgin Islands Governor Kenneth Mapp told reporters on Thursday. The government has imposed a 24-hour curfew until further notice.

About 600 people throughout the US Virgin Islands are in emergency shelters and many parts are without power, Mapp said.

‘It’s going to be a long road to recovery,’ Mapp said. Maria hit about two weeks after Hurricane Irma pounded two other US Virgin Islands: St Thomas and St John.

Irma, one of the most powerful Atlantic storms on record, killed at least 84 people in the Caribbean and the United States. It followed Harvey, which killed more than 80 people when it hit Texas in late August and caused flooding in Houston.

More than two months remain in the Atlantic hurricane season, which runs from June 1 to November 30.