Is being a woman bad for your health? Yes, says one A&E specialist

Yes, says A&E specialist Dr Alyson McGregor, who for years has witnessed women being misdiagnosed or given the wrong treatment. Why? Because medicine is a man’s world and it’s time to start fighting for change…

I’ll never forget the day a 32-year-old woman almost walked out of my A&E department while having a heart attack. She had visited her GP several times, twice within the past 48 hours, before coming to hospital, experiencing discomfort in her chest and shortness of breath which worsened when she became agitated.

The doctors had attributed Julie’s symptoms to a combination of panic attacks and stress to her heart due to her weight. End of story. However, as a specialist in sex and gender medicine, I knew that during myocardial infarction (MI, aka a heart attack) and other cardiovascular events, women often present differently to men. In fact, women’s cardiac symptoms are often described as ‘atypical’ and ‘unusual’ in medical literature.

While men might experience pain radiating down their left arm and chest heaviness, women often present with only mild pain and discomfort, possibly combined with fatigue, shortness of breath and a strong feeling that ‘something isn’t right’.

I ordered an electrocardiogram [a test that checks how your heart is functioning]. The cardiologist rang me, sounding astounded. Julie had a blockage in the main coronary artery. In other words, a condition likely to kill her within weeks, if not days. But it would have been left untreated because her symptoms were inconsistent with the classic male model of a heart attack.

One of the biggest and most flawed assumptions in medicine is this: if it makes sense in a male body, it must make sense in a female one. But in every aspect our current medical model is based on, tailored to and evaluated according to male models and standards.

All our methods for evaluating, diagnosing and treating disease are based on research performed on male cells, male animals and male bodies. There are reasons our system has evolved this way, many of them scientifically valid.

However, recent research is revealing that female bodies are physiologically different from men’s on every level, from our chromosomes and hormones to our bodily systems and structures. Therefore the medicine that works for men doesn’t always work for, or even apply to, women.

In the A&E department, I am on the frontline of medicine. I have a broad view of all aspects of healthcare and the conditions that many women live with every day. From infections to heart conditions, sprained ankles to strokes, head trauma to back pain, I see them all across 26,000 patients or more per year. I also see how male-centric medicine is causing women to receive potentially inappropriate, ineffective or even substandard care, every single day.

We are only just beginning to understand the scope of the differences between men and women, and how those variations might impact everything from how drugs are prescribed to how routine tests are performed, pain is assessed and treated, and how systemic disease is diagnosed.

We need to reinvent medicine, from the ground up, to include the half of the population it has marginalised and left behind.

The gender gap: Not All Bodies Are Equal

A medical model that uses white male bodies as a baseline is going to be biased. There’s no way around it.

Fifty years ago, the world of medical research looked very different. It was, essentially, the Wild West of medicine. Every new drug was seen as likely to be beneficial and safe, so pharmaceuticals were tested and distributed with very little regulation.

As medical research evolved and became more regulated, researchers noticed that monthly female hormonal fluctuations created hard-to-account-for variables in their trials. So many scientists opted to omit women from both human trials and in the initial phase of lab testing using animals. The pervasive belief that women’s bodies and systems are essentially the same as men’s made this male-centric approach seem like a no-brainer in the beginning. But now that we know there is a difference, it’s obvious that excluding half the population from clinical trials and drug safety testing is not only a bad idea but a dangerous one, too.

We can no longer ignore the evidence that a woman’s every organ and system, from her brain to her bones, from her metabolism to her arteries and veins, are physiologically unique and that, as such, she must be offered different and appropriate diagnoses, treatments and preventive care.

However, I and my contemporaries didn’t have textbooks for this kind of thing in medical school. Everything we learned was based on the male-centric model, and every procedure we learned was based on male-centric care. Most anatomy books use only male models, with disembodied breasts and pelvises used when ‘female parts’ are discussed. Even the mannequins used for simulations in academic settings are male. 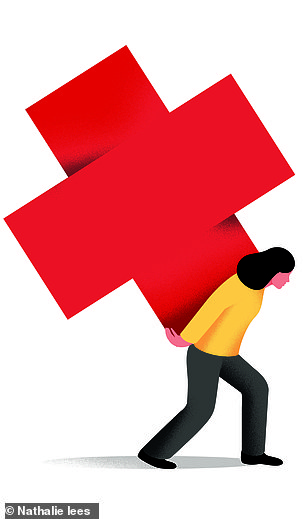 What this means for your diagnosis

The result of our current male-centric medical system is that in order to receive an accurate diagnosis and lifesaving treatment, a woman will often need to convince her doctor that something is actually wrong. Women with microvascular disease may have perfectly normal stress tests but suffer from terrible recurring chest pain; those same women could drop dead of a heart attack a week later with nothing on their medical charts to indicate that they were at risk.

Women having strokes can experience headaches and dizziness without the standard (ie, male-pattern) droopy face and weak extremities. Women with lung and ovarian cancers may show few, if any, definitive symptoms until it’s too late and the cancer has spread. And along the way, doctors – both male and female – without access to critical gender-based information are treating them for the wrong things, unable to diagnose them or, worse, brushing off their symptoms as ‘all in their heads’.

Even the perception of how women experience pain, and how their pain is managed both in and out of a hospital setting, is highly problematic.

While change is happening, it is slow. The best way for you to shift the conversation around your health and ensure you receive sex-specific and appropriate care is to have targeted, productive conversations with your doctor (see opposite).

Why we deserve better – now!

How to talk to your doctor

When you can ask the right questions, you can work with your doctors to get the right care, but communication is a two-way street. We are no longer in the era of ‘doctor knows best’. Yes, medical professionals have dedicated a major chunk of their lives to understanding the human body and how it works – but no one knows your body better than you. You have choices about what kind of relationship you want to have with your doctor. My job is to help patients get the help they need in moments of crisis, but also to help them make informed decisions that will improve or sustain their health. I know that many, even most, of my colleagues think the same way.

Like all relationships, the doctor-patient one goes both ways. Clear lines of communication are imperative. Knowing how to start and steer the conversation can have powerful and even life-saving results.

What to ask your GP

Your GP is the most important healthcare professional with whom to develop a trusting, amiable relationship. This is the doctor you will call when something goes wrong, but also who will help you heal and maintain your health. You need to trust their judgment and feel that they have your best interests at heart. If you feel as though you are not being seen or heard by your GP, that you can’t be transparent in your discussions or that you may be on the receiving end of unconscious bias, I encourage you to find a new doctor.

These are some questions to ask:

What are the latest recommendations for women of my age around… (eg, yearly screenings and blood tests, mammograms, colonoscopy and smear tests, plus other routine testing)?

How often do I need to do the above exams and why?

Are you aware of the latest research on sex and gender in your field?

What to ask your Specialist

During my training, I had the chance to assist several surgeons in multiple disciplines. One was a particular favourite of patients. He had a great bedside manner, was jovial and positive, and always had time to say hello. He was also the sloppiest surgeon I’ve ever seen. On the other hand, another surgeon who was incredibly intimidating and impersonal in his patient interactions was absolutely meticulous in the operating room. If I was going under the knife I’d choose doctor number two in a heartbeat.

When looking for a specialist, don’t be afraid to ask about outcomes. There’s a good chance that they are involved in research of their own and will be happy to answer queries. These are some questions to ask:

Have you studied sex differences in your discipline?

Does this test/procedure you’re recommending take into account my personal biology?

Have you noticed any differences in outcome between your male and female patients?

What are the alternatives if this test doesn’t give us the answers we’re looking for?

Are there side effects of this test/procedure that I should be aware of as a woman?

Will this test/procedure be influenced or impacted by my birth control/pregnancy/breastfeeding/HRT?

One of the biggest challenges that I and my colleagues encounter is patients’ lack of knowledge about their prescriptions. Here are some things you can find out to be sure that you can share the whole picture with any healthcare provider, both in an emergency setting and elsewhere:

Are the drugs I’m taking the right ones for my sex, race/ethnicity and stage of life?

Am I taking sex-appropriate doses or do we need to adjust my prescription?

Is this medication tested on women? If so, are there different dosing guidelines I should be aware of?

Will this prescription affect my birth control or HRT?

Is this medication a generic [a drug known by a general name, rather than a brand name] and, if so, how might that affect me? Has this generic been studied in women?

I’ve noticed that I feel different since I started this new medication. Is there another affordable brand I could switch to?

Sex Matters: How Male-Centric Medicine Endangers Women’s Health and What We Can Do About It by Dr Alyson McGregor will be published on 19 May (Quercus, £16.99)