It would be the BBC’s worst nightmare made real – a fox-hunting, Old Etonian Brexiteer being appointed its chairman on a platform of abolishing the licence fee.

The Mail on Sunday understands that Charles Moore, the former editor of The Daily Telegraph and The Spectator, is Downing Street’s favoured choice to take over at the Corporation when Sir David Clementi’s three-year term expires in February.

It would be a provocative option even by the standards of Boris Johnson’s No 10: Lord Moore, 63, is a vehement critic of the Corporation’s Left-wing ‘woke’ values – and objects to its guaranteed £4 billion-a-year income from the fee.

In 2010, he was fined £262 for not possessing a licence, having donated the equivalent sum to charity in protest at the BBC’s refusal to sack Jonathan Ross for making prank calls with comedian Russell Brand to the actor Andrew Sachs.

BBC staffers will be hoping that No 10 plumps for one of the names lower down the Government’s shortlist: both former Culture Secretary Nicky Morgan and former Chancellor George Osborne are pro-Remain liberals who would represent the business-as-usual option.

The Mail on Sunday understands that Charles Moore, the former editor of The Daily Telegraph and The Spectator, is Downing Street’s favoured choice to take over as BBC chairman

Relations between the BBC and No 10 have been fraught since last year’s Election, with Downing Street saying the Corporation spoke only to a pro-Remain metropolitan bubble.

It prompted a temporary boycott of flagship news programmes such as Radio 4’s Today, and led to the acceleration of its plans to ‘whack’ the £157.50-a-year fee by decriminalising its non-payment.

Tim Davie took up the poisoned chalice of being the BBC’s new director-general this month.

Earlier this year, Lord Moore, who was Mr Johnson’s boss when the Prime Minister worked for the Telegraph, wrote that the BBC could ‘not carry on as before’, saying: ‘It is essential to understand that technological and generational change has already destroyed the BBC’s century-old ‘wider still and wider’ doctrine.

‘It is simply not possible for it to dominate all fields any longer. The BBC must start to decolonise. It needs Government help to do this in a dignified manner – more like British imperial decline than like the fall of the Soviet Union.’

He described the BBC’s bias as ‘not chiefly party political (though it is certainly anti-Tory). It is politico/cultural – woke, pro-Remain, credulously green, anti-market, obsessed with issues connected with ‘diversity’, yet itself not truly diverse at all… if you had watched only the BBC in 2016, it would have come as an almost total shock to you when 17.4 million people voted Leave’.

Most chillingly for BBC staff, he added: ‘The greatest single wrong on which the BBC rests is the licence fee. It is an offence to freedom and a poll tax for anyone with a television (and, nowadays, a computer or mobile phone). Non-payers, almost always poor, clog the magistrates’ courts.’

Nor will Lord Moore have endeared himself to most BBC staff by suggesting last year that actress Olivia Colman was a poor choice to play the role of the Queen in the Netflix drama The Crown because she had a ‘distinctly Left-wing face’.

Despite being described as ‘the incarnation of intellectual Conservatism’, Moore, who wrote an acclaimed biography of Margaret Thatcher, comes from a family of Liberal Party members, only switching to the Tories after graduating from Cambridge. 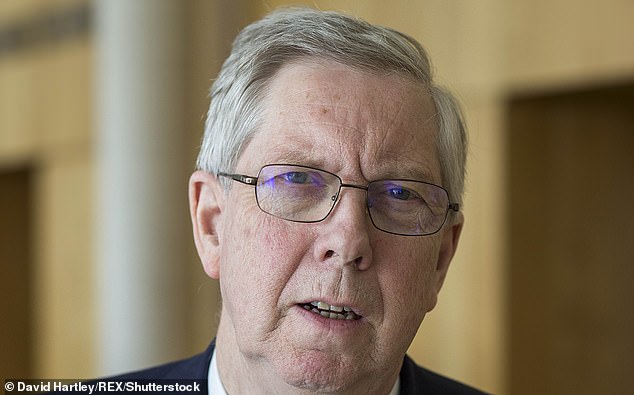 But he displayed flashes of his liberal roots in 2001 with a signed editorial in the Telegraph which argued in favour of hunting, pornography and the legalisation of cannabis.

He converted to Roman Catholicism following the Church of England’s decision to allow the ordination of women as priests in 1992.

Lord Moore – an expert on parsonages who was nicknamed Lord Snooty by Private Eye – was critical of David Cameron’s efforts to modernise the Tory Party and failure to address the inefficiencies of the National Health Service, which he described as ‘a terrible organisation’.

Father-of-two Moore, whose wife Caroline is a former English don at Cambridge, attracted criticism five years ago when he questioned whether Labour leadership contenders Yvette Cooper and Liz Kendall had ‘got the looks for a leadership contest’, adding: ‘There is an understanding that no leader – especially, despite the age of equality, a woman – can look grotesque on television and win a General Election.’

He has described being Mr Johnson’s boss at the Telegraph as ‘a nightmare’, because he was always ‘so late – and I mean terribly late – with his copy’.

Lord Moore has also marvelled at Mr Johnson’s ability to bounce back from repeated scandal and setbacks. A Government source said: ‘Charles would shake things up, which is exactly what the BBC needs.’