There’s no denying that Cartier is one of the most exclusive names in the world of luxury jewellery.

Although the fine jeweler – which is stocked in high-end retailers such as Harrod’s and Selfridges – has been known to sell bracelets for as much as £395,000, it’s their ‘Love’ collection which achieved cult status in the fashion world.

Over the years, celebrities including Khloe Kardashian, Hailey Bieber and Kylie Jenner, who was just 15 when she received her ring, have been spotted wearing the classic engraved gold band – which starts from £1k.

Earlier this month, TikTok user Savannah Mukeshi went viral when she had her designer ring valued by a local jeweller – who claimed it only contained £115 worth of gold.

Cartier Love wedding bands start from £1,000. TikTok user Savannah Mukeshi went viral this month when she had her ring valued at a London jeweller 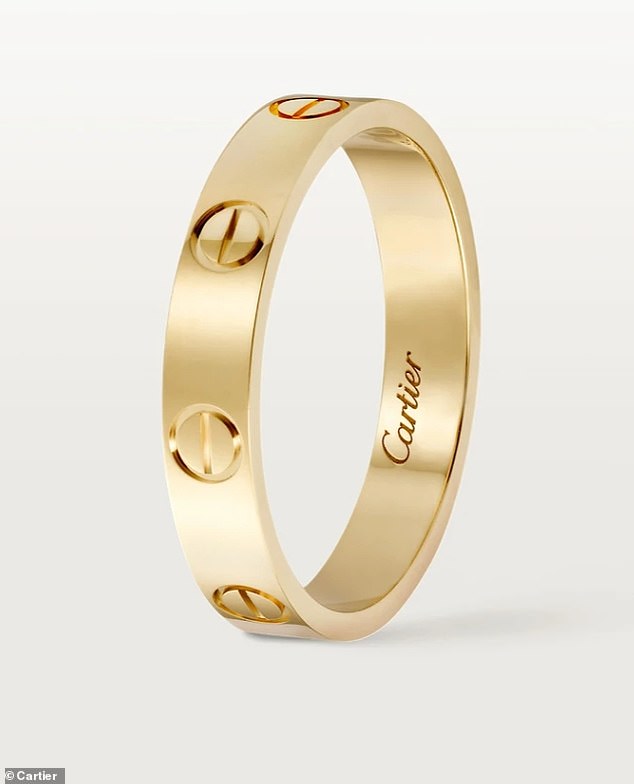 The social media star says she ‘begged’ her boyfriend to buy her the expensive ring for her 28th birthday. 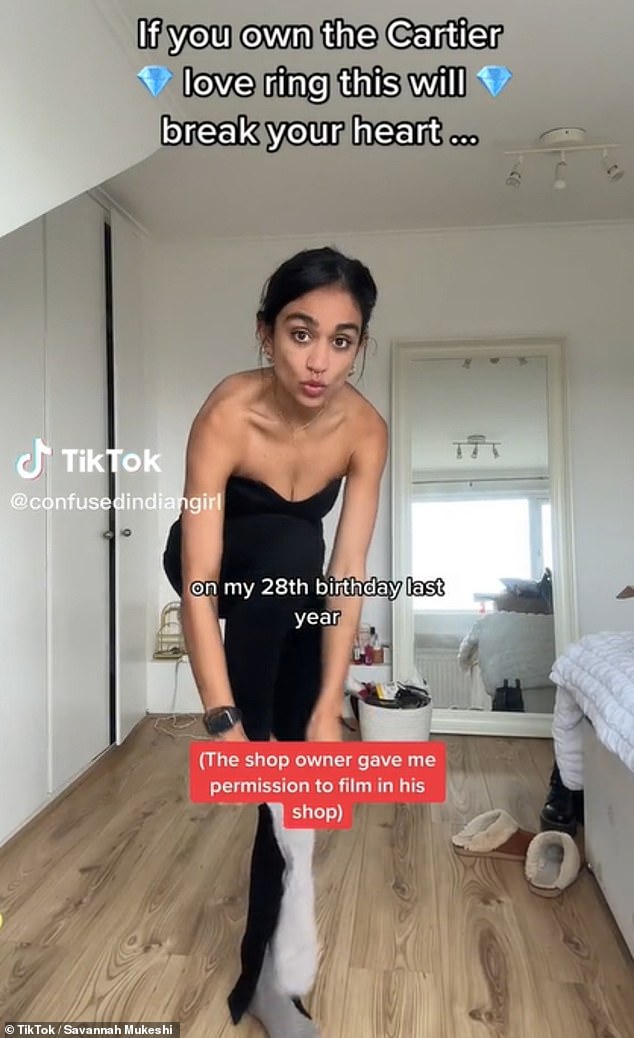 Savannah’s video has racked up over 1.7m views. She told viewers that it would ‘break Cartier ring owner’s hearts’

In her video, which has racked up over 1.7m views, Savannah explained how she had ‘begged’ her boyfriend to buy her the designer ring for her 28th birthday last year.

Filming herself getting ready for a shopping trip, the social media star said: ‘My mum went absolutely berserk because she’s wiser and less swayed by brands.’

Ahead of her 29th birthday, Savannah said how her mother made a point of purchasing her a ring that was ‘actually worth its weight in gold’.

Vlogging her shopping experience, the TikToker – who boasts 61,300 followers – filmed herself going into an Indian-owned London jewellery store with her mother and boyfriend. 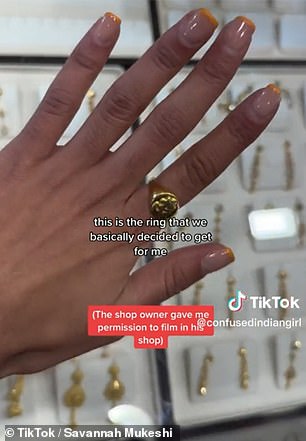 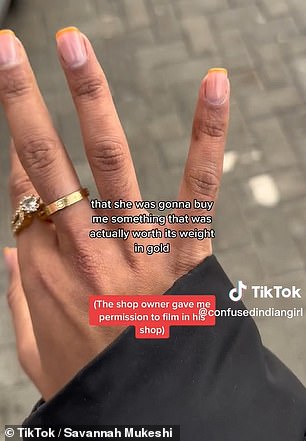 Left: Savannah’s mother has bought her this 10g gold ring for her upcoming 29th birthday. Right: Savannah’s mother said she wanted to buy her something that was ‘worth its weight in gold’. The TikToker showing off her Cartier ring before going into the shop

While they were picking out a new 10g gold ring, Savannah handed over her designer one – which weighs 3.4 grams – to the store’s owner.

She continued: ‘The man in the shop weighed my Cartier ring while we were in there and told me the gold value of it […]

She explained: ‘The gold price the jeweller would be referring to is 3.4 grams multiplied by the scrap price for 18 carat gold for that particular day (and really that particular minute).

‘So that would be if you wanted quick cash and you went to Hatton Garden -knowing then it would be melted down and recycled. This would also apply to something like the value of gold metal in the Imperial Crowns; there is a gold value but that doesn’t make the piece somehow not priceless of course.

‘This also does not correspond to what jewellers manufacturing pay for gold. Scrap places pay less, then refine the metal, and sell it back to the jewellery industry at a higher price.’ 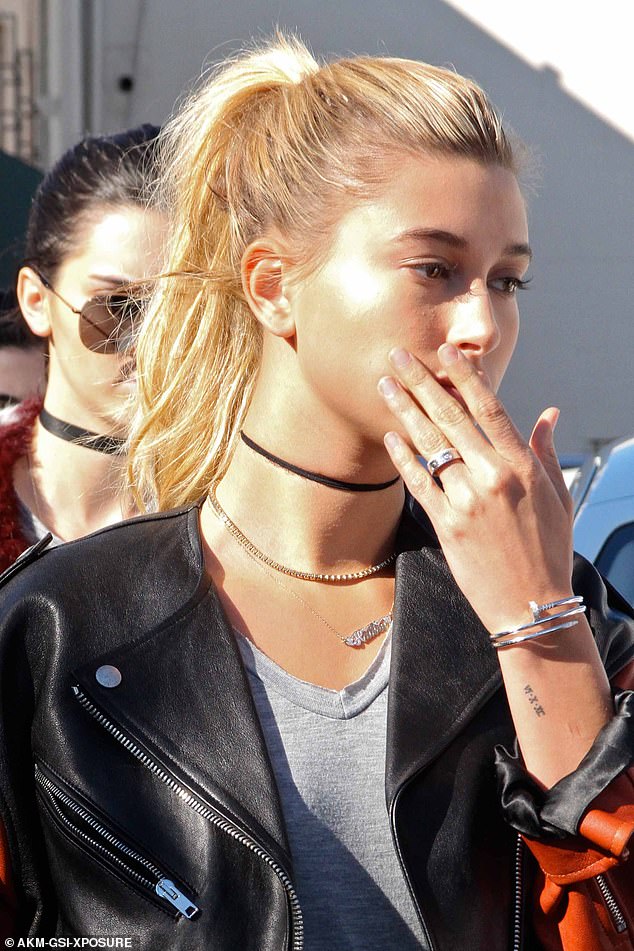 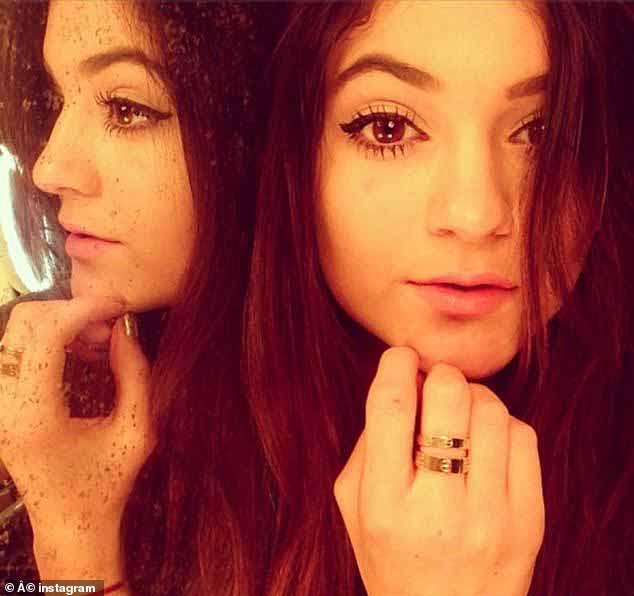 That said, Elise estimated that the ring itself probably only costs up to £300 to make – but that excludes the high-quality packaging and overhead.

She added: ‘The luxury brand obviously increases the value associated with the piece. Similarly to say Louis Vuitton, no one thinks that there is £2,000 worth of leather in a bag, however there is the association with luxury, the design, the craftsmanship (which for Cartier is all in Switzerland), the packaging, the stores, the logistics and operations, the solicitors who help them fend off fakes.

‘The third point I think to remember is that the high and fine jewellery industry is quite literally trying to make jewellery pieces worth more than their weight in gold!’

What’s more, jewellery expert James Constantinou rubbished the claims – and says you can’t overlook the value of the designer name.

Shedding light on the designer’s eyewatering price tags, the expert – who founded Prestige Pawnbrokers – said: ‘When you put the stamp Cartier onto something, it’s more to do with the brand and nothing to do with the weight of the gold or the jewels within it.

‘This shop is merely weighing the gold value without a proper understanding of leading brand names which have much more value in the secondary market. They are weighing a Cartier ring in the same way as any other gold ring.

‘The same would apply for other leading brands such as Tiffany, Bulgari, Van Cleef & Arpels where you pay for craftmanship and brand name. Ignoring the weight, the quality is far more superior from these leading brands.’

Referencing how Cartier is ‘easily resold’, James said that Cartier owners can expect to get ’50 to 70 per cent of the original price back’ if they choose to sell.

He continued: ‘As soon as an item has a certified branded stamp, the value immediately goes up. [Ignore the weight and take into] consideration the craftmanship and quality material used.’