Is it a good time to sell your home? Sellers are setting unrealistic prices, experts say

As house prices begin to go down according to many measures, the property market is at an impasse.

There are increasing numbers of sellers setting unrealistic asking prices, perhaps buoyed by higher valuations received in months past. And meanwhile, prospective buyers are standing by and waiting for the cost of a home to fall.

Seven in 10 estate agents say home sellers are being unrealistic about what their properties are worth, according to estate agent membership body, Propertymark.

Agents say sellers are overvaluing their homes, either because they think they have the best house on the street, or because they want to sell at a price which will enable their next move.

It means many are listing for more than their property is actually worth.

High expectations: 71 per cent of estate agents believe sellers are being unrealistic in how they price their properties, according to Propertymark

Sellers might get away with that in a hot market, but at the moment demand among those buying homes is on the wane.

According to Zoopla, home buyer demand fell by 50 per cent in the final three months of last year. The number of sales agreed was also down by 28 per cent year-on-year.

This chimes with what estate agents have been reporting to Propertymark.

Propertymark also reported that the average number of viewings per property fell by 71 per cent between April and December 2022.

This is not stopping sellers from listing their properties for sale, however. Propertymark found that estate agents saw a fairly steady stream of available properties over 2022, with no change recorded year-on-year between December 2021 and December 2022.

The year 2022 started as a seller’s market, and ended the year back to normality as a buyer’s market

Nathan Emerson, chief executive of Propertymark said: ‘The largest shift we have seen in the sales market is prices agreed, compared to normal asking prices.

‘The year 2022 started as a seller’s market, and ended the year back to normality as a buyer’s market.’

Emerson urged sellers not to pay too much attention to how much other homes in their area were being listed for, as those homes may have been lingering on the market, or could fail to actually sell for the advertised price.

‘The best price is usually achieved in the first four to six weeks of marketing, so we urge sellers not to compare their property to other homes on the market which may not have sold yet, and ensure they receive valuations from a qualified and accredited estate agent,’ he said.

When will sellers accept the new reality?

Higher mortgage rates combined with wider economic uncertainty have forced many Britons to place their home-buying or moving plans on hold.

Demand for mortgages to purchase a home fell sharply in the final three months of last year, according to data from the Bank of England.

It found that new mortgages for property purchases dropped 75 per cent compared with the previous three months.

Starved of buyers, sellers are having to come to terms with the reality that their house price may no longer be worth what it was six months ago.

Mortgage shock: ONS and Bank of England data shows the rapid rise of mortgage rates over the past year

House price indices are beginning to suggest that prices are turning. Halifax and Nationwide both recorded consecutive falls in the final months of last year. However, the data tends to lag behind what is actually happening in real time.

Consequently, it may take time for many sellers to accept the reality of what their home is now worth.

Henry Pryor, professional buying agent says: ‘Usually about 1.2million homes are sold every year, but I am expecting a few as 800,000 this year as sellers sit on their hands waiting to see if they can hold out for the price they had hoped they would have got last year.

‘The housing market is like a supertanker – it takes a long time to change direction or speed, and most of 2023 will be taken up with sellers holding out for last year’s price before realising that what they want to move to has fallen in value just like theirs.

‘So, I’m not yet seeing a Mexican standoff, but I expect to. At the moment, it’s just too early, but the penny will drop by the summer.

‘As always some will get it sooner and some will take until Christmas. Others will cling on for too long as some estate agents try to buy new business by being optimistic for longer.’

Sellers need to be careful how they price their property, according to experts.

It can be tempting to match what other properties in the area are on the market for, but the advice is to speak to local estate agents to ensure the house goes on the market for a price that will attract interest, rather than one that’s purely speculative.

‘Sellers need to listen to their agents’ advice and price accordingly,’ says Henry Pryor. ‘The best are still selling and selling well, but you are likely to be punished if you are over-ambitious. Price is what you ask. Value is what you get.

He adds: ‘Sellers would do well to remember that an asking price is not a statement of value. It’s part of the marketing, there to attract potential purchasers to view.

Rob Dix, co-founder of the property forum, Property Hub, suggests sellers might be wise to hold firm or delay selling until later in the year.

‘The market isn’t bad enough that the big sellers are dropping prices,’ says Dix. ‘If you look at the major housebuilders in the UK, they’re not talking about reducing prices.

‘They’re sticking to their guns and carrying on selling at the same price point, so sellers should feel boosted by this.

‘If you can afford to hold off selling in the first quarter, I can see things improving throughout the year.

‘You’re probably going to do better in the second and third quarters of the year than you are now.’

Know what’s happening in your area

It’s worth understanding what buyer demand and house prices are doing in your local area, rather than focusing on the country as a whole.

House prices are not determined by a single market, but rather a plethora of markets across the UK, and the experience can be different right down to the very street or road you live on.

The property market in the UK’s more expensive areas can be less attractive when buyers budgets are constrained – as they are now by rising mortgage rates.

Liana Loporto-Browne, a London based estate agent, said a four-bed terraced house had been unsuccessfully marketed by several other agents before it landed with her. 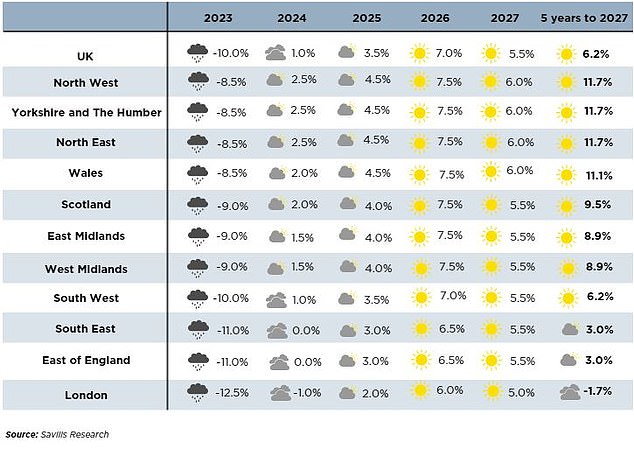 Grey skies in the housing market: Savills expects double-digit house price falls in 2023, in a year when discretionary movers will sit on their hands

However, quieter and more affordable areas such as the North West are holding their value, according to Propertymark.

Bolton based estate agents Miller Metcalfe reports that 99.5 per cent of its properties are being sold at the asking price.

It sold a two-bedroom terrace house in Bury, Lancashire at the initial asking price of £127,000 in early January, just three days after it went on the market.

However, it conceded that this month’s sales thus far have on average taken 16 per cent longer from instruction to sale agreed compared to last year. 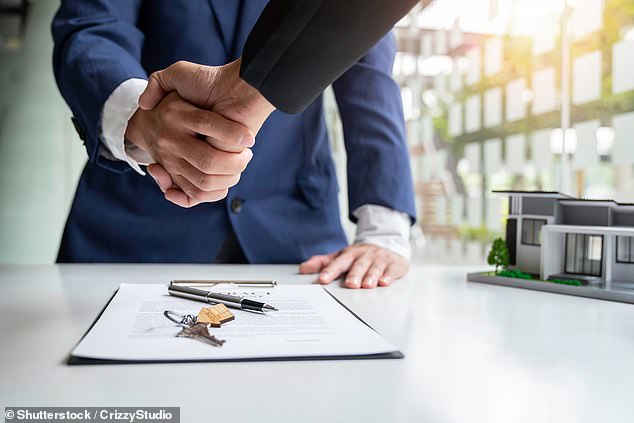 Zoopla estimates that close to half of all UK homes increased in value over the final three months of last year, highlighting differences in trends between local markets.

‘Housing markets vary by geography and price band. The value of a home is important in unlocking that next home moving decision.

‘While the headlines might talk of UK house price falls in 2023, each home will have its own trajectory – so speaking to an agent or tracking your home value online are ways households can stay in touch with the value of their largest asset.’

What’s the advice for buyers?

Most predictions for 2023 have house prices falling anywhere between 5 and 20 per cent.

The advice to buyers is therefore simple – good things come to those that wait. However, that doesn’t mean putting their lives on hold in order to try and time the market.

‘My advice to buyers is to be patient,’ says Henry Pryor, ‘if you have to buy now then you will have to pay more to do so as it will take time for sellers to understand the new norm.

‘If you want to move later in 2023, start looking now and when you find the right thing, buy it if you can afford it.

‘It may be cheaper in 12 months’ time, but I expect that in three years time it will be worth what you paid for it.

‘Don’t put your life on hold. Judging the top or the bottom of a market is usually down to luck, not expertise.’