Is it wrong for a married woman to feel floored by death?

The urgent buzzing of my mobile phone as I stood by the luggage carousel in Heathrow airport was the first indication something awful had happened. It had been switched off for a week (oh, the luxury) while I enjoyed a holiday in the sun on the Greek island of Ithaca.

A casual squeeze on the ‘power on’ button as I waited for my suitcase to appear, and it was as if a dam had burst. Text after text tripped over themselves to land in my inbox.

Geoffrey was dead. He’d collapsed a few days earlier at home. Had I heard? Wasn’t it terrible, everyone asked?

The best way to describe that shock is like having a heavy weight land on your chest. You try to breathe in, but the gasp gets snagged.

Tears get jarred, too. I don’t remember much about the taxi ride home. Who’d died? Geoffrey Thorwald James, a fellow presenter-producer in local radio in Bristol in the mid-Seventies — and one of the greatest loves of my life.

Jenni Murray (centre) with Geoffrey Thorwald James (right) in 1978, a fellow presenter-producer in local radio in Bristol in the mid-Seventies

Grieving the death of a long-lost lover is strange. There’s no standard rule book on its ethics.

Is it really permitted, or indeed appropriate, for a happily married woman and mother, of some years’ standing, to feel so utterly floored by the death of someone you’d loved so many years before?

It was this very moral perplexity that was raised recently by the actor Ian McShane, who revealed how deeply he’d been affected by the death of the first of his three wives, Suzan Farmer, at the age of 75.

The relationship had clearly been short lived. McShane said he had hardly seen her for two years of their marriage as he was out partying and trying to make his name. It was, he explained, the Sixties, but her passing, all these years later, had had a profound effect. I completely understand his deep sense of loss.

I met Geoffrey Thorwald James as my far-too-early marriage to Brian Murray — we were wed when I was 21 — was in the process of disintegration. Like McShane, I was busily working hard to build up the foundations of a career as a broadcast journalist.

Unexpectedly, into my life, came GTJ and what the French would describe as a ‘coup de foudre’ — a bolt of lightning — or, rather less romantically, in English, ‘love at first sight’.

He was proud of the unusual middle name, although I never discovered the origins of it, but it was the least of the peculiarities and precious delights that made him the man I have always described as my ‘one’.

He was tall with an unfortunate tendency to gain weight, generally around the middle and largely due to his unquenchable fondness for Waddington’s beer. He could sniff out a Waddies pub within a ten-mile radius.

You couldn’t have called him handsome, with his unruly, dark curly hair and spectacles which were in a constant state of disrepair. But attractive, charming, witty, clever, kind, generous, joyous, attentive were all words designed to define him.

I have no doubt we both fell quite hopelessly in love and our fate was sealed by a slightly drunken encounter in the basement gramophone library at BBC Radio Bristol as a Christmas party came to an end.

We worked and lived together, jointly producing and presenting the station’s mid-morning, three-hour programme.

Our professional talents complemented each other perfectly — mine the more politically aware and serious end of what the programme required, his the fun and endless warmth with listeners who phoned in.

It was Geoffrey who put through the call to me during a phone-in on pet care with a local vet that was replayed for years afterwards. A Mrs Burgess from Clifton had called for advice about a pair of toads that were mating in her garden. As the tale unfolded and she explained it had been going on for several days and the toad on the bottom appeared to be upside down, my giggle became so uncontrollable I had to disappear under the desk and let the vet take over. 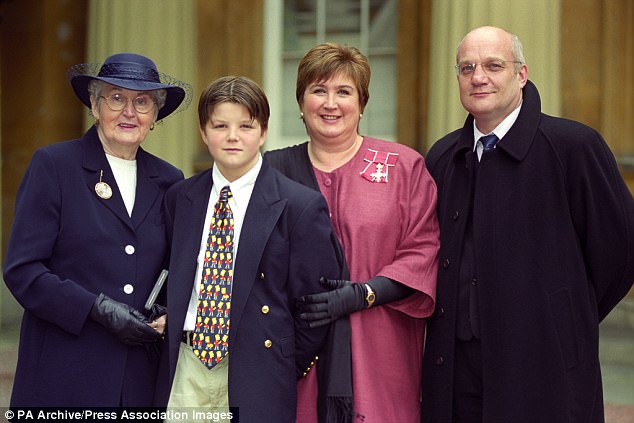 Jenni Murray, presenter of BBC Radio Four Woman’s Hour, with her family after receiving an OBE for services to Radio Broadcasting from the Queen at Buckingham Palace in 1999

Geoffrey found the whole incident hysterically funny. I paid him back soon after with another pet call, this time concerning a budgie who, the caller explained, had a little toy in his cage around which he would wrap his wings and bounce up and down.

‘I’m afraid,’ she shrieked, ‘he’s pleasuring himself!’ Geoffrey’s turn to hoot with laughter and disappear under the desk.

Our work and social lives were inevitably intertwined and for nearly three years we were inextricably joined at the hip. I doubt there’s ever been a time in my life when I have laughed and smiled so much. We discussed, but never argued or fought. Marriage and a future together were frequently talked about.

Our only minor disagreement was his fondness for country music. I thought it mawkish and old fashioned. Strange that, many years later, I too would see the pleasure in Emmylou Harris and become a devoted fan of the TV series Nashville. I regret all the whingeing I did about being dragged along to country concerts at Bristol’s Colston Hall.

My most vivid memory of our time together was a holiday we spent in Greece. I longed to visit an island called Ithaca, as I’d been greatly moved by a poem of that name by C.P. Cavafy and, of course, by the story of Odysseus’s struggles to return there to his faithful wife, Penelope.

It was, as I had imagined, the most perfect romantic trip. First, a few days in a remote and quiet part of Corfu, a boat to the island — there was only one a week in those days —and back to Corfu to fly home.

We were completely wrapped up in each other in the sun and the startlingly still clear blue sea. Back home, our careers gathered pace. The manager of the station was keen that we should progress through the BBC. I was encouraged to try television and Geoffrey became a producer on the Today programme. Geography drove the first wedge between us.

It was the occasion of my 29th birthday that produced the first serious cracks. I arranged a Friday-night party at the flat in Bristol. He planned to arrive from London around seven.

By ten he was still not there — no mobiles in those days — and when the phone rang it was the wife of one of his closest drinking companions. They’d gone out for a quick one after work and come back to hers in no fit state to drive.

Same story the next day. They had ‘popped out for a quick one at lunchtime’ and returned completely legless. He finally turned up on the Sunday evening and I was so hurt and angry I virtually had to be scraped off the ceiling.

His response? ‘I really don’t understand why you’re so angry. You claim to love me.

‘If I turned up late at my mother’s or my sister’s, they’d just be pleased to see me!’

I was never quite sure he could see there might be a difference in what was expected in such different relationships.

The break-up was prolonged and extremely painful, as we both ended it, started it again and then ended it once more. 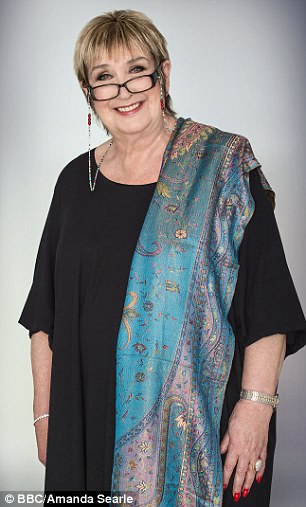 Grieving the death of a long-lost lover is strange. There’s no standard rule book on its ethics, writes Jenni Murray (pictured)

Always in the back of my mind was the question of whether I could trust this wonderful man to make my needs more important than his love for alcohol. Would I ever be sure he would turn up at school on time to pick up any children we might have?

It was then that I learned, I suppose, that I would always let my head rule my heart and never the other way around.

I was 30 when I met David Forgham Bailey. Handsome, charming, fun, gainfully employed and dashing in his naval officer’s uniform. Most importantly he hardly drank alcohol, always turned up when he said he would and even ironed a shirt for me one morning when I was rushing to get ready for work.

There was a short period where I vacillated between the two and I did learn it is possible to love two men at the same time, but David’s sobriety and reliability won out in the end. David and I set up home and had our two boys, Ed and Charlie, before finally marrying in 2003, after 23 years together.

Geoffrey went on to marry and had a couple of children, a few years younger than my two.

I never stopped feeling weak at the knees at the prospect of seeing Geoffrey. For a short while we worked together on the Today programme and for the rest of time we would occasionally meet for lunch or dinner and speak often on the phone.

Neither of us believed that the end of a love affair should mean bitterness and recrimination when two people had shared so much.

We were scrupulously faithful to the partners with whom we’d chosen to build our families, but we were never able to contemplate cutting each other out of our lives.

But, finally, it was the drink that ended our relationship and then, tragically, his life. I began to be aware of the toll the booze was taking on his health some seven or eight years ago.

His calls to me, often at work as Woman’s Hour came to an end before lunchtime, were slurred and muddled. Then I learned from our many mutual friends that he was in hospital, seriously ill, his liver shot to pieces.

That time he recovered, swore he would never drink again and friends tell me he pretty well stuck to his decision.

But the damage was done. His calls became less frequent and when he did ring he was confused — with clear memories of events from 40 years ago, but nothing of what he’d done yesterday.

How ironic that I should be in Ithaca, sunning myself on that very island (actually, it was a cruise, on which I’d been hired as a guest speaker) where we’d spent our blissful holiday together all those years ago, when Geoffrey finally died.

His poor son had heard a thud from his parents’ bedroom above just after breakfast, his wife had already left for work

Back home, I think David struggled to understand my grief. When I announced Geoffrey had died, his attitude was very much of the ‘so what?’ kind. Yes, it was sad, but it was 40 years ago . . .

A few people got it. Friends urged me to attend the funeral. I couldn’t do it. I told myself and everyone else that it would be inappropriate and unfair to his wife and children for a weeping former lover to intrude on their grief.

In truth, I felt I couldn’t bear to see the man I had loved for more than 40 years enclosed in a box and hear others extol his virtues in their eulogies when I had no right to say a word.

Instead, I spent the day in tears — apart from when I was on-air, of course. Work, as always, provided an infallible distraction.

I still have dreams of the morning I woke up alongside him as the sun shone through the window and felt a rush of overwhelming happiness.

I think of him almost every day and have to pinch myself as a reminder that it’s true — I live in a world without his humour and passion in it.