Rumors abound that Facebook founder Mark Zuckerberg is looking to hire a jet-setting nanny to care for his two daughters.

Last week a posting was made on a nanny-hiring site offering to pay $110,000-130,000 per year for a nanny to work for a San Francisco-based ‘young, entrepreneurial family’ with ‘multiple residences’.

But it was the need for the nanny to be fluent in Mandarin that led to many believing that Zuckerberg and his Chinese-heritage wife, Priscilla Chan, were in the market for help,The Shanghaiist reported.

The ad, which has now been deleted, described the family as having ‘several businesses and philanthropic interests’. 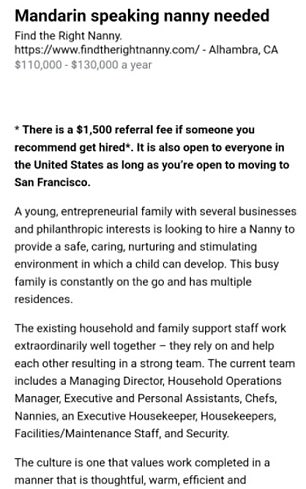 Hiring now: The job ad (pictured) said a ‘young, entrepreneurial family’ were looking for a nanny in San Francisco who may have to work in ‘mulitple residences’

It also said that while the nanny would have to relocate to San Francisco, the family itself is ‘always on the go’ and ‘has multiple residences.’

Other requirements for the prospective carer is having least three years of experience, a bachelor’s degree, a love for children and basic medical training.

The super-nanny would be expected to work from 8am-9pm five days in a row, but would then get the next five days off.

The ad notes that the household already has a team including a managing director, household operations manager, other nannies, a housekeeping team and personal assistants, as well as security.

Zuckerberg returned to work at Facebook Thursday after taking a month’s paternity leave following the arrival of second daughter August, who was also born in August.

He also has another daughter, Max, who is 21 months old. August already has 16 bodyguards.

He has made no bones about his enthusiasm for the Chinese dialect of Mandarin, which Chan – the children of ethnic Chinese refugees from Vietnam – also speaks. 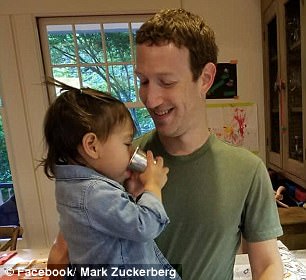 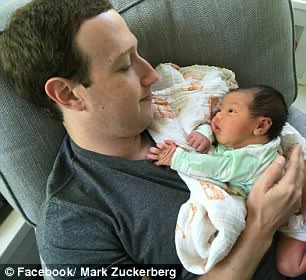 Daddy cool: The now-deleted ad didn’t name Zuckerberg, but speculation still ran rampant. He returned to work at Facebook on Thursday after the birth of August in – appropriately – August

In 2014, he said  that he was motivated to learn so that he could impress her family, Business Insider reported.

‘When Priscilla and I decided to get married, I told her grandmother using Chinese. She was really shocked.’

But he has also likely been inspired by his ongoing attempts to get Facebook past China’s online censors and into the hands of the country’s 1.38 billion people.

That could be a fool’s errand, since the government, which monitors communications within China closely, is unlikely to allow access to a social network it cannot control.

Earlier today, Zuckerberg announced that Facebook would turn over all of the information on Russia-linked advertisements to Congress.

Concerns have been raised that Russian agents paid for Facebook ads to influence American voters in the presidential election.