Is Monarch on the brink again?

The future of Monarch airlines was hanging in the balance last night as it held last-ditch talks over its finances.

Monarch, which has been in turmoil for more than a year, is fighting to retain its air travel operator’s licence.

Regulator the Civil Aviation Authority can deny an airline permission to do business if it believes it does not have enough cash to keep going.

Monarch, which has been in turmoil for more than a year, is fighting to retain its air travel operator’s licence (stock photo)

Monarch, which flies six million passengers to more than 40 destinations, has until tonight to prove it can meet the regulator’s demands. Without an Atol licence, the airline would have to stop offering, booking or receiving payments for package holidays immediately.

Monarch, which is owned by private equity firm Greybull Capital, is understood to be in talks with rival airlines to sell off bits of its business.

Budget carriers Norwegian and Wizz Air are both thought to have already held discussions with the firm. Greybull has hired accountants KPMG to review the airline’s finances and put in place a plan for a possible sale.

Last year, Monarch was forced to turn to Greybull for a £165million rescue package to keep flying. And last month Monarch chief executive Andrew Swaffield hit back after Ryanair boss Michael O’Leary said in an interview: ‘It is an open secret that Monarch and Norwegian will not make it through the winter.’

The Mail understands that the CAA has warned staff they may be called on to help the tens of thousands of Monarch customers who would be left stranded overseas, or who have flights over the next week.

Sources close to the airline said bosses were involved in talks with the CAA which were expected to run into the night. Rumours of the chaos at Monarch have even spread to passengers with two tweeting the firm yesterday about its future. 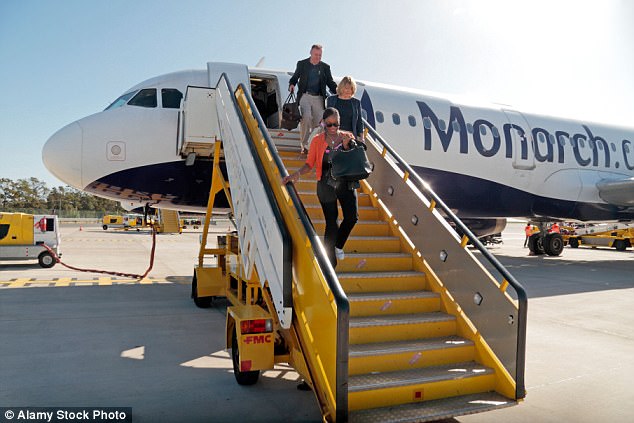 Monarch replied: ‘Nothing has been confirmed and we continue to look at a number of options. We will of course keep our customers updated.’

Monarch is the third major European airline this year to run into financial trouble. Italy’s national carrier Alitalia has already gone bust and earlier this month Germany’s Air Berlin went into administration. And its woes come after Ryanair cancelled more than 20,000 flights, with more than 750,000 passengers affected.

Monarch’s problems will further dent the reputation of the aviation industry, which has also been blighted with complaints that cost-cutting has led to a fall in service standards at British Airways.

Last night a spokesman for Monarch said: ‘We have made an application to the regulator for a standard renewal of our Atol licence. The CAA will publish its renewal notices as normal. In recent months we have undertaken, and continue to undertake, a comprehensive review of Monarch, designed to determine its optimal future shape, size and strategy. We are having positive discussions on a number of options with potential strategic partners and we will announce any material developments, if and when they happen.’

Last September Monarch was forced to beg for a 12-day Atol licence extension from the CAA while it sought emergency funds. This may happen again.

Any airlines that fly package holidaymakers need an Atol licence from the CAA to operate. This protects passengers in the event a company goes bust.

Luton-based Monarch has been operating since 1968 and employs around 2,800 staff. It is understood around 100,000 of its customers may currently be abroad, of which 10,000 are on package holidays.

A further half a million holidaymakers have booked to travel with Monarch in the coming months.

Sources close to the CAA told how staff had been asked to work overtime over the next few days in the event Monarch holidaymakers need to find new flights home.

They have been drafted in to answer the phones when passengers call to ask for advice. Other staff are being despatched to the airports Monarch flies from to advise passengers on the ground.

Last night customers were still able to make bookings for Monarch over the phone and online. A CAA spokesman said: ‘We do not comment on Atol renewals or the financial strength of companies.’