Is the Great Barrier Reef doomed? Up to 99% of coral is at risk of vanishing, new report says

The Great Barrier Reef stretches for 1,429 miles along the coast of Australia and although massive, new data shows up to 99 percent of it could disappear due to climate change.

The Australian Academy of Science revealed that if 2.7F (1.5C) degrees of warming continues, the world’s largest coral reef system will eventually perish.

The natural wonder is expected to shrink, but if the Earth experiences warming of 3.6F (2C) only one percent of coral will remain.

Researchers say that immediate ‘transformative action’ to reverse global warming is the only option for saving the Great Barrier Reef, but reaching the goal seems to be ‘virtually impossible.’

However, the team also notes that with Earth’s current rates of emissions, it is likely we will surpass 2.7F (1.5C) by 2025.

The Great Barrier Reef stretches for 1,429 miles along the coast of Australia and although massive, new data shows up to 99 percent of it could disappear due to climate change

The Great Barrier Reef sits in the Coral Sea, located off the coast of Queensland and is home for more than 2,900 individual reefs.

In March 2020, it was revealed the Great Barrier Reef is now facing its ‘most extensive’ and potentially devastating coral bleaching event following unusually warm recent ocean temperatures – and a recent report suggests it is heading to extinction.

And in October 2020, it was revealed that more than half of the corals had been lost to bleaching over the last 25 years.

When ocean temperatures are too high, corals expel their colorful symbiotic algae that provide them with food — turning them a bleached white. 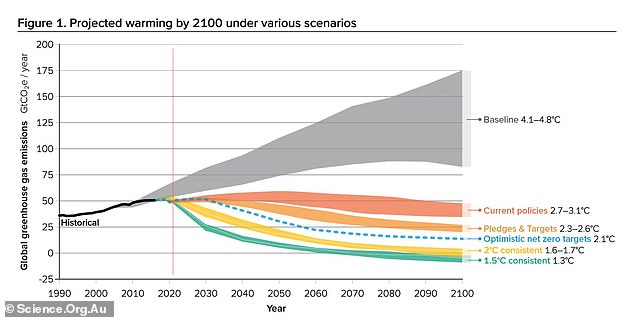 At 2.7F of warming, the natural wonder is expected to shrink by 70 to 90 percent, but if the Earth experiences warming of 3.6F (2C) only on percent of coral will remain 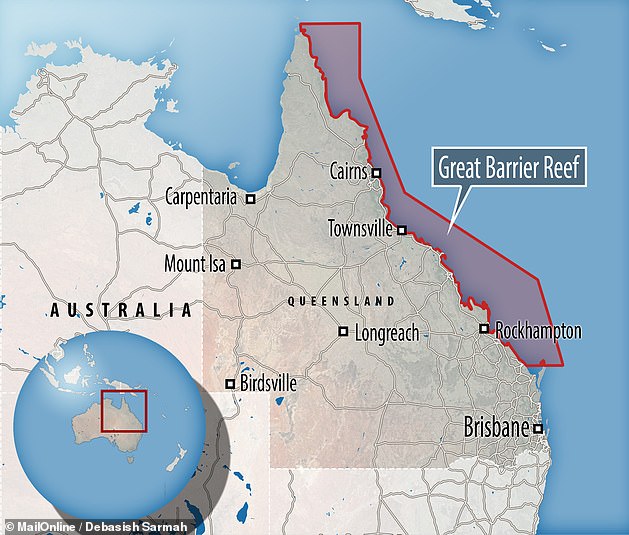 The Great Barrier Reef sits in the Coral Sea, located off the coast of Queensland and is home for more than 2,900 individual reefs

The report, titled ‘The Risks to Australia of a 3C Warmer World,’ suggests Australia is headed for a climate disaster and that it will take the Great Barrier with it.

‘As the driest inhabited continent, Australia is highly vulnerable to the impacts of global warming,’ the report states.

‘The summer bushfires of 2019–20 in a tinder-dry country, or the three severe coral bleaching events within five years that caused a loss of over 50 percent of hard coral cover in the shallow waters of the Great Barrier Reef, demonstrate some of the consequences of a warming planet for Australia’s people, economy and environment.’

According to the researchers, the entire world has already seen a 2F (1.1C) warming increase since the Industrial Revolution, The Sydney Morning Herald reports.

This transformative era began in 1760 and lasted until about 1840, and was the adoption of new manufacturing process in both Europe and the US. 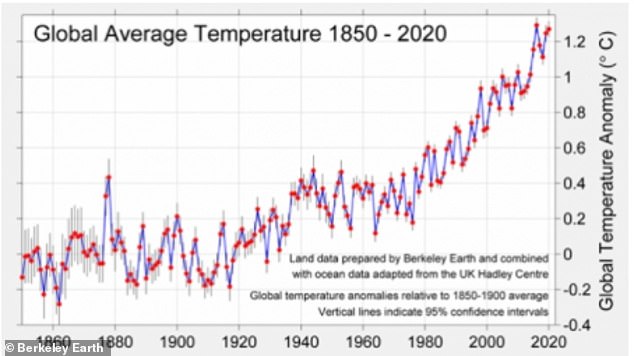 According to the researchers, the entire world has already seen a 2F (1.1C) warming increase since the Industrial Revolution. This transformative era began in 1760 and lasted until about 1840, and was the adoption of new manufacturing process in both Europe and the US

Along with making a shift to more mechanical processes, the world saw an increase in pollution and a depletion of natural resources to power the machinery – and it ‘had an immediate effect on the climate.’

However, Professor Lesley Hughes of Macquarie University explained that warming does not impact Earth equally, as Australia is already facing an increase of 0.8F (1.4C).

Because Australia is warming more and faster than the rest of the planet, its natural wonders, specifically the Great Barrier Reef, are more at risk of being destroyed by climate change.

Ove Hoegh-Guldberg, a biologist and climate scientist specializing in coral reefs, has some hopeful news.

He notes that if humans are able to stabilize warming, the surviving corals could recover and again, expand over the entire reef.

However, Hoegh-Guldberg also explained that if the opposite occurs, the once colorful reef will be replaced with seaweeds, bacteria and other organisms.

Along with being larger the Great Wall of China, the Great Barrier Reef is also home to around 1,625 species of fish, 3,000 mollusks and 30 different types of whale and dolphin.

‘We used to think the Great Barrier Reef was protected by its sheer size,’ commented Professor Hughes said in a 2020 statement.

‘But our results show even the world’s largest and relatively well-protected reef system is increasingly compromised and in decline.’

Corals have a symbiotic relationship with a tiny marine algae called ‘zooxanthellae’ that live inside and nourish them.

When sea surface temperatures rise, corals expel the colourful algae. The loss of the algae causes them to bleach and turn white.

This bleached states can last for up to six weeks, and while corals can recover if the temperature drops and the algae return, severely bleached corals die, and become covered by algae.

In either case, this makes it hard to distinguish between healthy corals and dead corals from satellite images.

This bleaching recently killed up to 80 per cent of corals in some areas of the Great Barrier Reef.

Bleaching events of this nature are happening worldwide four times more frequently than they used to.

An aerial view of Australia’s Great Barrier Reef. The corals of the Great Barrier Reef have undergone two successive bleaching events, in 2016 and earlier this year, raising experts’ concerns about the capacity for reefs to survive under global-warming