Is this Belgium’s ‘Crazy Brabant killer’ who massacred 28 people in supermarkets?

Is this Belgium’s ‘Crazy Brabant killer’ who massacred 28 people in supermarkets? Hunt for menacing man holding a shotgun 40 years after killings

Belgian police today released an old photo of a man carrying a military assault weapon, to try to solve the decades-old mystery of the country’s bloodiest series of murders.

Known as the ‘Crazy Brabant Killers’, the assailants killed 28 shoppers and wounded hundreds more in attacks on supermarket car parks in the Brussels area between 1982 and 1985.

Photographed in a forest, the man is wearing dark glasses and a military-style shirt and trousers and holds a semi-automatic combat shotgun made by Italian brand Franchi.

This handout picture released on June 16, 2020 by Belgium’s Federal Police shows a man holding a weapon in a forest. The man is wanted in connection to a series of murders in Brussels which took place between 1982 and 1985

Federal investigators who took over the case more than two years ago are ‘committed to start from scratch’, said spokesman Eric Van Duyse.

‘The call for witnesses was part of that process, he added.

A tipster who claimed the man was ‘very important’ handed over the photo to investigators in 1986, but never said anything more and nothing came of it, Duyse said.

Over the decades, investigators have considered various theories, including that the group was part of an attempt by the far left or far right to undermine the state.

The gang’s equipment and ability in handling weapons raised suspicions at the time that there was a link to the Belgian security forces.

Investigators have also looked for links to local shooting clubs.

Van Duyse said investigators were taking another look at 3,000 names mentioned in the massive case file and had begun DNA testing for hundreds of them. 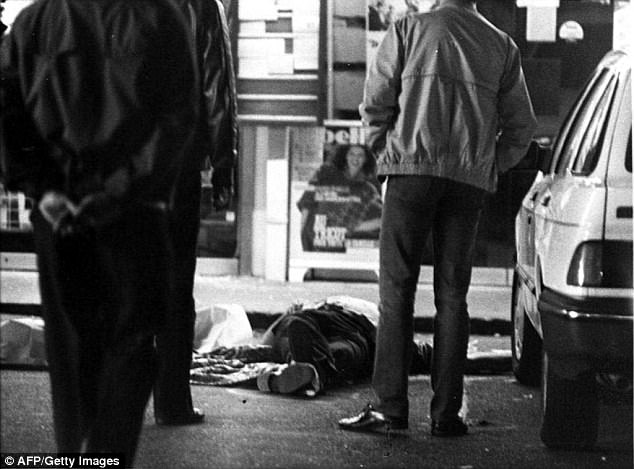 A crime scene picture taken on September 27, 1985 shows the body of a man killed during a hold-up at the Delhaize supermarket in Overijse by the Brabant killers

In 2017, a former policeman revealed on his deathbed that he was the ringleader of the robbery gang.

The retired officer revealed himself to be ‘The Giant’, the gang’s notorious leader.

The identity of the gang’s fearsome members has remained a mystery that has troubled Belgium for almost 40 years.

But officials have now confirmed reports that detectives have been working on the new lead for months and were optimistic about finally identifying the group, also called the ‘Nivelles Gang’.

As well as The Giant, other members included ‘The Killer’ and a getaway driver known as ‘The Old Man’.

Among their crimes, the gang robbed a grocery store at Nivelles in 1983, killing a couple who stopped at an all-night fuel station next door and then shooting police who arrived at the scene.

In November 1985, they stormed into a supermarket in Aalst brandishing pump-action shotguns. The frenzied shooting of people cowering on the floor and a nine-year-old girl waiting in a car outside helped fix the gang’s ‘crazy’ image in the public imagination. But it was also their last.