Is this festive meal plan the secret to a stress-free Christmas?

For many home cooks across the country, Christmas Day is often marred by having to slave away in front of a hot stove for hours and panicking about over (or under) cooking the turkey.

But imagine if you could limit your time in the kitchen to just two hours – during which you could prepare and serve an entire traditional three course festive meal from scratch?

It sounds impossible given the usual roasting time of a large turkey is around three to four hours if you go by the 20 minutes per pound rule.

But if you’d rather spend an extra couple of hours watching classic films or indulging in a few aperitifs, this meal guide courtesy of Ann’s Smart School of Cookery could turn out to be your number one Christmas gift. 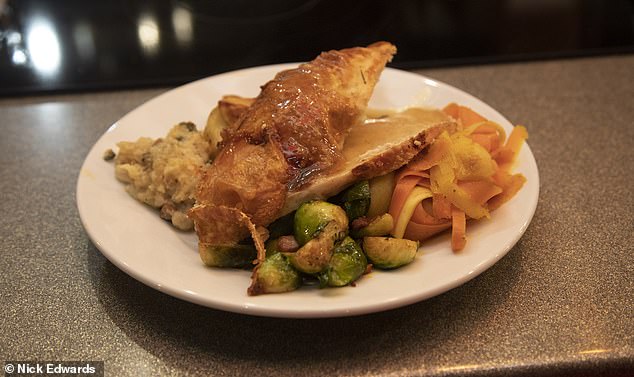 This Christmas, you can limit your time in the kitchen to just two hours – during which you can prepare and serve an entire traditional three course festive meal from scratch. Pictured: turkey dinner with all the trimmings

This year will be my first ever Christmas away from home, and I’m hosting – a scary thought because suddenly, the all-important dinner is my responsibility.

While in years gone by I happily lent a hand to chop a few spuds and wash up the odd dish, I’ve never gone near the rear end of a turkey, never mind its giblets.

So this year I’ve got my work cut out – and naturally I leapt at the chance of learning a few hints to make my Christmas morning less stressful.

Described as an ‘intimate dining and learning experience’, Ann’s Smart School of Cookery claims to provide guests with insider tips and tricks of the trade.

It was started up in Essex by Ann Hood – a former Masterchef contestant – in January 2009, and over the past 10 years has gone from strength to strength, now offering a range of different classes at locations in London, Essex, Windsor and Tuscany.

Up to 20 guests can join each informal class, where you’re provided with an apron, and you receive the recipes afterwards by email.

Our chef was Maggie De Dominicis, who was as enthusiastic and knowledgeable as she was patient.

Our menu consisted of a starter of salmon pate served on crispy crostini, followed by a turkey dinner with all the trimmings, and a bread and butter pudding for dessert with homemade custard. All to be cooked from scratch in just two hours.

The main event – the turkey

We began with the turkey, which Maggie informed us we’d be cooking spatchcock. This involves removing the spine of the bird, which required some ‘CPR’-style manoeuvres (the irony) to crack the ribs to make it easier to cut away. 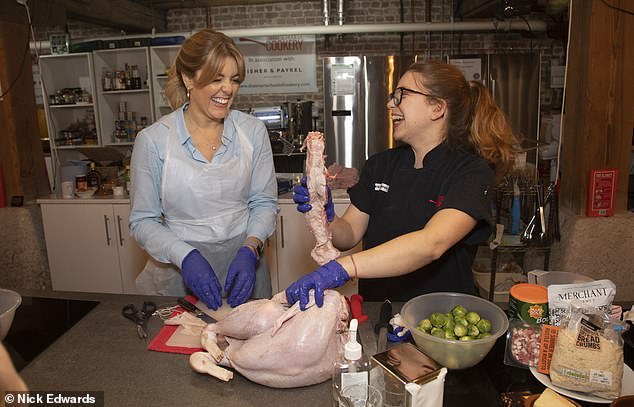 Hayley and chef Maggie began with the turkey, which was cooked using a spatchcock technique which involved removing the spine of the bird and lying it flat

While taking out its backbone was a messy and somewhat laborious task, Maggie reminded us that this 10 minutes of faff would save us around two hours’ worth of cooking time.

This is because the bird sits flatter in the oven, meaning the heat can penetrate it much faster and cook it more evenly. It also cooks at 200 degrees constant, so you don’t have to keep checking it and reducing the temperature.

Starting with the breast side down, use a sharp knife and place it either left or right of the chicken’s spine, starting at the parson’s nose end. Cut through to the other end of the spine. Turn the turkey over and press on the breast and it will lay flat. 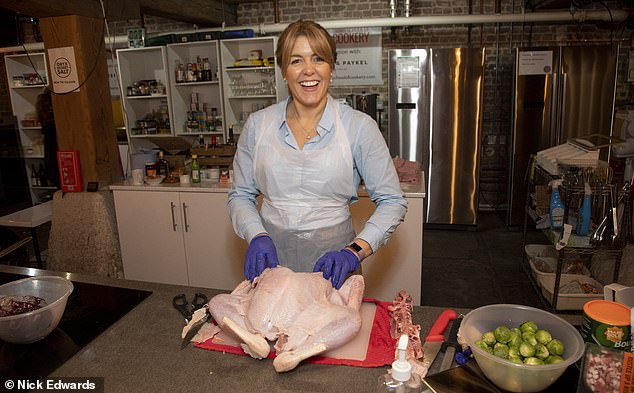 The bird sits much flatter in the oven when it’s cooked spatchcock, meaning the heat can penetrate it much faster and cook it more evenly. It also cooks at 200 degrees constant, so you don’t have to keep checking it and reducing the temperature 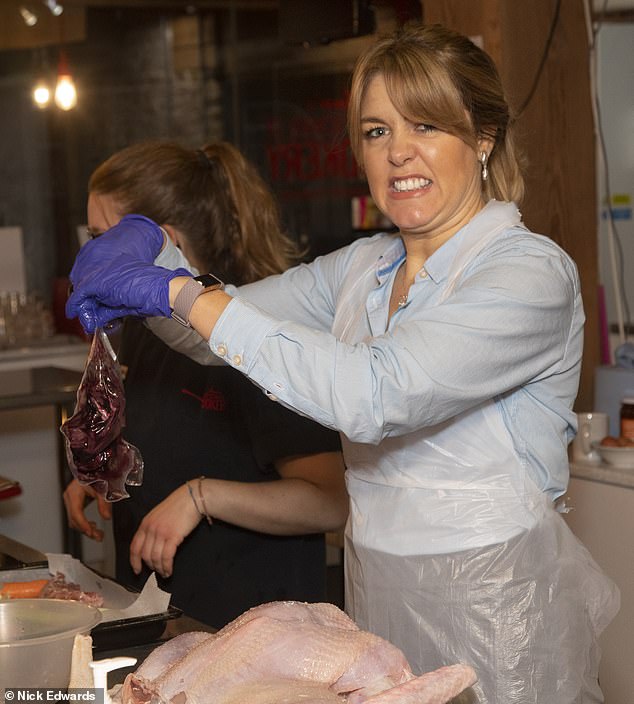 Make sure there’s a tray underneath the turkey to catch the juices, and add an onion (cut into quarters with the skin on), celery, rosemary and chuck in the giblets, neck and spine, as this will help form a tasty broth for the gravy.

Rub salt into the skin of the bird before you put it in the oven, as the seasoning will penetrate into the flesh and the gravy as well as making the skin crispy and golden. Rub it with rosemary before placing it in the oven.

Allow one-and-a-half hours for a 4kg bird, or check it reaches 73 degrees for two minutes with a thermometer in the breast and thigh.

Once the turkey is cooked and resting, make the gravy by adding 250ml of veg stock to a pan with the contents of the tray. Give the giblets and company a press to squeeze out excess juice before putting it through a sieve and add a cornflour paste (a tablespoon of water mixed with a tablespoon of flour) to thicken. 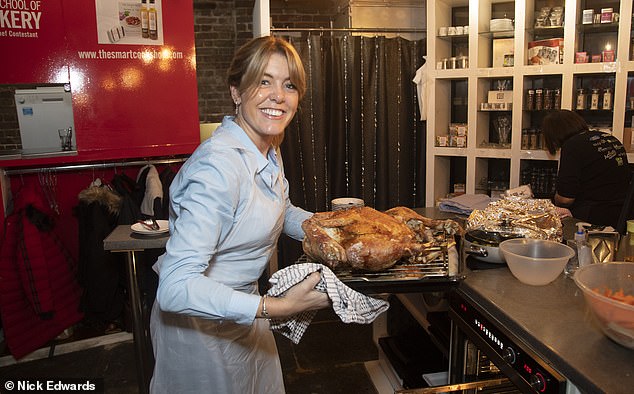 Allow one-and-a-half hours for a 4kg turkey to cook, or check it reaches 73 degrees for two minutes with a thermometer in the breast and thigh

Once the turkey is in the oven, chop the potatoes with the skins on – they’re a great source of complex fibres and vitamins, says Maggie – and place them in a mixing bowl. Season them with salt, pepper, garlic salt, whatever you fancy, then toss them in rapeseed oil.

Doing this in a bowl as opposed to the baking tray makes it easier for each spud to get an even coating of seasoning. These will take around 30 minutes to cook.

To save time and oven space, Maggie suggested serving ribbons of parsnips and carrot instead of roasted veg, which are pan-fried towards the end of the cooking process, minutes before serving. 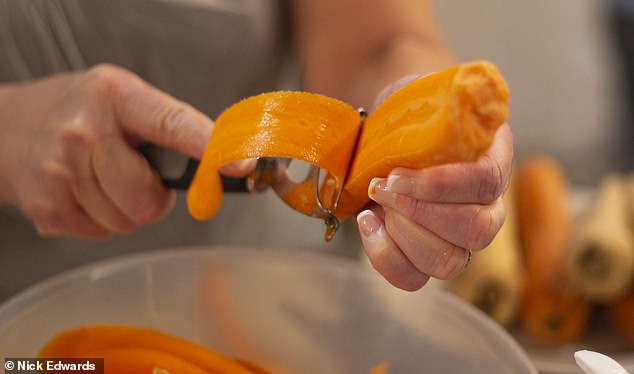 Maggie suggested serving ribbons of parsnips and carrot, which are pan-fried towards the end of the cooking process, minutes before serving 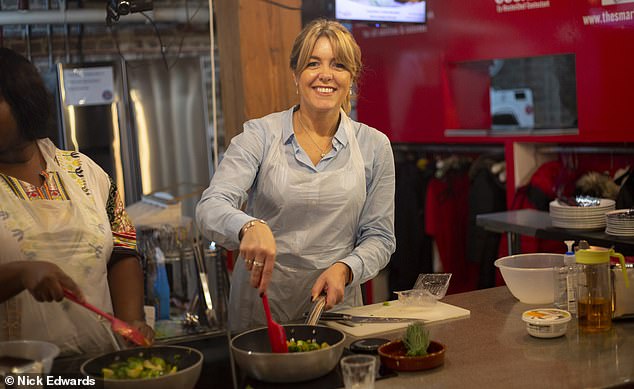 Rather than part-boil the sprouts, Maggie recommended cutting them into quarters, giving them a 30 second blitz in the microwave before frying them with lardons

The sprouts were also a revelation; rather than part-boil them, Maggie recommended cutting them into quarters and giving them a 30 second blitz in the microwave in a bowl before frying them with lardons. This also took little time other than the initial chopping, which can be done the day before.

To make the stuffing, sweat a diced onion in a hot pan with 100-200ml of vegetable stock and and breadcrumbs, a bunch of chopped sage leaves or chopped chestnuts, and add garlic and seasoning to taste. You can even throw in some lemon zest or grated Parmesan to give it a kick. If you like it crispy, place it in the oven for 20 to 30 minutes.

Maggie’s starter was super quick and very simple, but delicious. For the crostini, she thinly sliced a part-baked baguette and seasoned each one with salt and pepper before using a basting brush to apply an even coating of rapeseed oil. 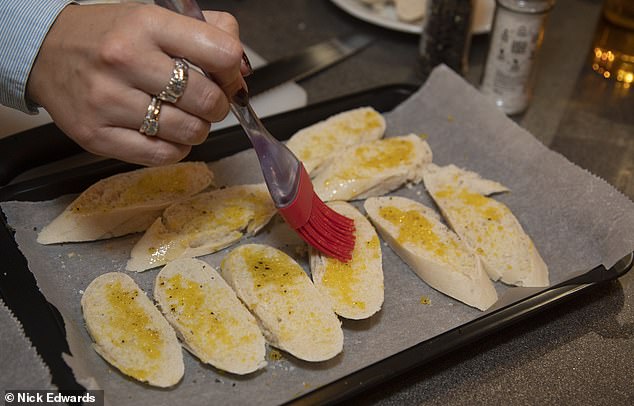 For the crostini, thinly slice a part-baked baguette and season each one with salt and pepper before using a basting brush to apply an even coating of rapeseed oil 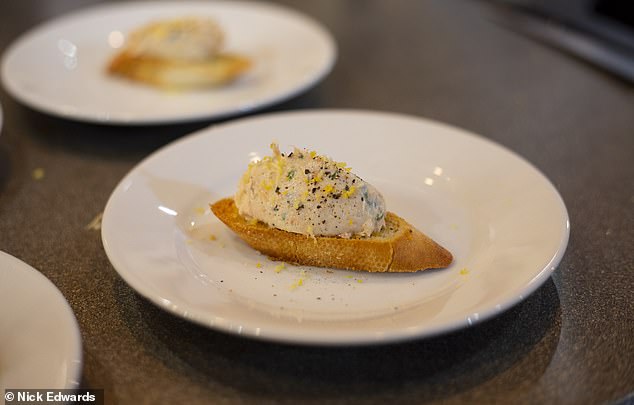 To make your pate, flake the fish into a tub’s worth of mascarpone and add salt, pepper and garlic, grated lemon zest and juice to taste

These went in the oven until golden and played host to the salmon pate, which was made using fish we smoked then and there, using a special ‘smokie’ pouch patented by Ann.

This took around 10 minutes in a pan, and after it had cooled we flaked the fish into a tub’s worth of mascarpone, added salt, pepper and garlic, grated lemon zest and juice.

Place in a cold pan and mix well, then switch the heat on midway through and slowly stir and heat until it reaches a light custard consistency.

If it goes lumpy, add a little cold cream or milk.

Our final task was the bread and butter pudding, for which Maggie used a shop-bought Madeira cake for the base.

This was sliced 1cm thick and placed in an oven-proof dish. We then made a custard, half of which was poured over the cake – the rest was saved for serving.

We then added nuts and raisins and placed it in the oven the 20 minutes at 200 degrees (you could of course cut corners here by using shop-bought custard).

To caramelise the pudding, we added a mix of marmalade, brandy and water and returned it to the oven for eight more minutes. 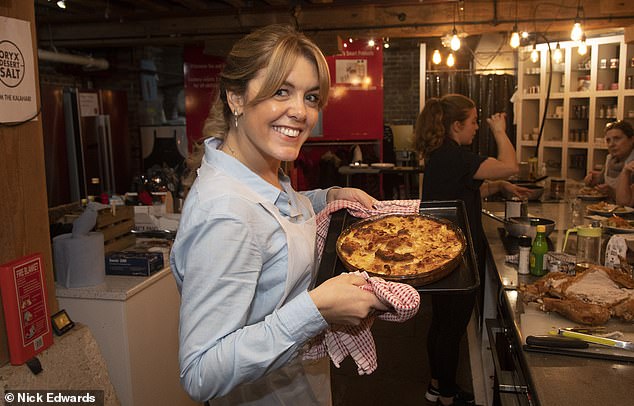 Our final task was the bread and butter pudding, for which Maggie used a shop-bought Madeira cake for her base

OUR VERDICT ON THE MEAL

All in all I couldn’t believe what we managed to produce in such a short space of time – especially given that much of that was Maggie explaining each step and demonstrating preparation techniques.

The salty skin on the turkey was a triumph. I have to admit, when it came out of the oven it was very golden (to the point where I’d be panicking it was burnt) but the meat inside was tender and delicious, and the skin itself was very moreish.

It also helped the gravy, which was full of flavour without needing any additional seasoning. 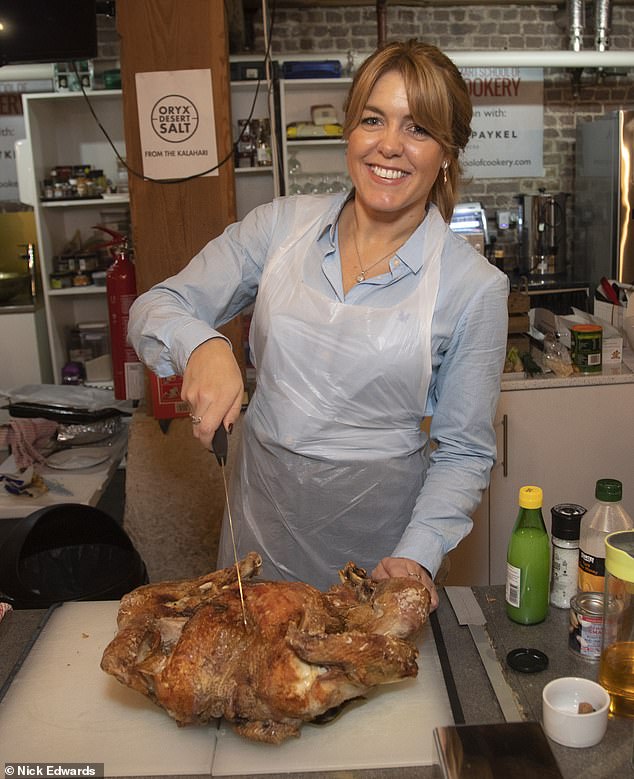 The salty skin on the turkey was a triumph – even though the bird looked a little burnt, it was moist and tender inside

While I’m not sure I’m brave enough to spatchcock a turkey this Christmas (and may cop out with a turkey crown) I’ll certainly give this a go with a roast chicken.

I have to admit I usually detest sprouts, but pan-fried this way with the bacon I actually rather enjoyed them – and they kept their vibrant green colour much better than they do when they’re boiled, so they made an attractive addition to the plate.

I enjoyed the potatoes but personally I do prefer a more traditional roast potato cooked in goose fat – these were a little dry and more Mediterranean in style.

I also missed roasted vegetables – the carrot and parsnip ribbons didn’t do it for me, I missed the chewiness of the honey-soaked parsnips.

I thoroughly enjoyed the starter and the dessert – though I’m not sure bread and butter pudding can overtake traditional Christmas pud in my affections, it’s certainly a great alternative to be able to serve guests who aren’t keen on the boozy fruit cake.

To book a class at the Smart School of Cookery, visit redletterdays.co.uk