‘Is this Meghan Fox?’ Meghan Markle causes confusion after introducing herself by first name only

Meghan Markle was mistaken for Megan Fox after introducing herself by her first name only during a phone call, a resurfaced interview has revealed.

The Duchess of Sussex, 41, caused confusion when personally calling the manager of an LA dog rescue centre to discuss adopting her seven-year-old beagle, named Mamma Mia.

Shannon Keith, an animal rights attorney who runs the Beagle Freedom Project, told the Los Angeles Times in August how she was left wondering whether Meghan was American actress Ms Fox, 36, after talking to her for 30 minutes.

Her interview – in which she explained that Meghan had simply referred to herself by her first name – has resurfaced in Tatler’s latest issue, in an article titled ‘What do Americans really think of the Sussexes?, by Ben Widdicombe. 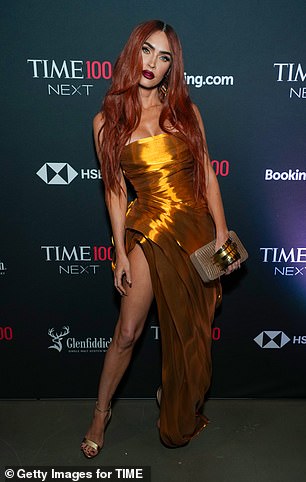 Meghan Markle (left in September) was mistaken for Megan Fox (right in October) after introducing herself by her first name only during a phone call, a resurfaced interview has revealed

The journalist wrote: ‘Meghan clearly feels she has a role to play in American public life – even if the mononym status she enjoys in the UK has not yet transferred to her home country.’

Ms Keith’s comments are used as an example of this, with the manager recalling: ‘She calls on my cell with no caller ID and says, “Hey Shannon, this is Meghan.” We talked for 30 minutes, and I thought, “Is this Megan Fox?”‘

Meghan and Prince Harry, 38, adopted one of 4,000 beagles that were rescued from an animal testing centre in the US.

They took in seven-year-old dog, Mamma Mia, who now lives with the Duke and Duchess of Sussex and their children Archie, three, and Lilibet, one, at their $14m, seven-acre mansion in Montecito, California. 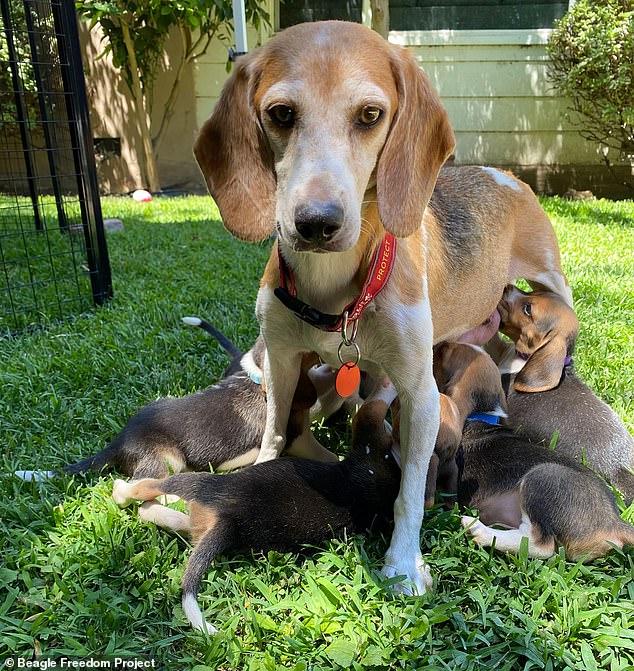 The Duchess of Sussex, 41, caused confusion when personally calling the manager of an LA dog rescue centre to discuss adopting her seven-year-old beagle, named Mamma Mia (pictured above with some of her puppies)

The dog joined their other pet beagle, Guy, and a Labrador named Pula. The family also have chickens, which were allegedly rescued from a factory farm.

Mamma Mia was one of 4,000 that had been bred at the Envigo breeding and research facility in Virginia, so they could be sold for use in pharmaceutical and biotech research.

Several inspections of the Envigo facility over the past two years found dozens of violations of US federal regulations.

The animals were rescued in July and taken in by organisations including the Beagle Freedom Project, who looked after 25 of the dogs.

Meghan and Harry are said to have made an after-hours visit and played with Mia, who had been brought there with eight of her newborn puppies.

Ms Keith recalled: ‘The duchess is holding Mia and was like, “We’re adopting her.” She was like, “No, we don’t want a Christmas puppy. We want ones we can help who are older.”‘ 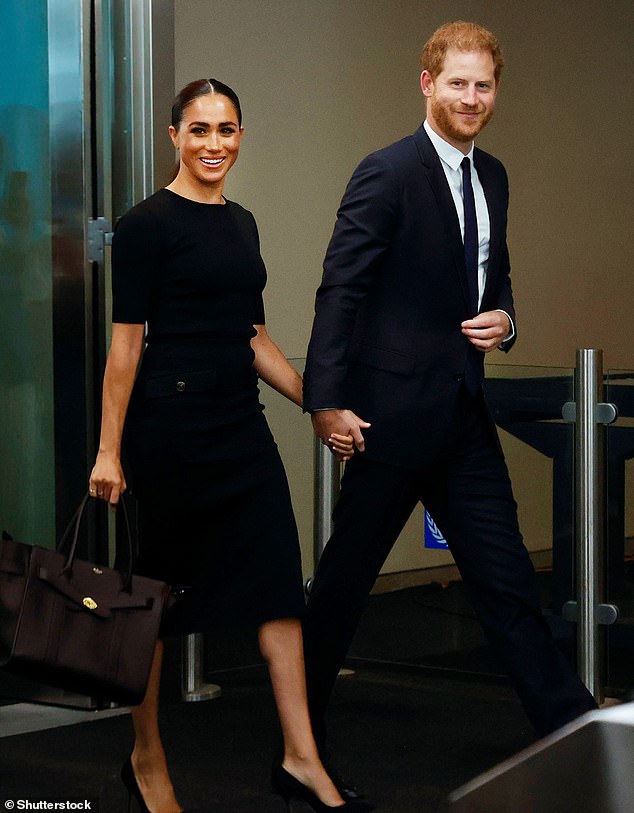 Shannon Keith, an animal rights attorney who runs the Beagle Freedom Project, told the Los Angeles Times in August how she was left wondering whether Meghan (pictured with Prince Harry in July) was American actress Ms Fox, 36, after talking to her for 30 minutes

Animal-lover Meghan has adopted a number of rescue dogs over the past few years and brought her American rescue beagle Guy to the UK when she married Harry.

The former actress chose animal welfare charity Mayhew as one of her first patronages.

When she moved to England to be with Harry she had to leave Bogart – a Labrador-shepherd mix – in the US.

Meghan has previously said the pair of rescue dogs ‘mean the absolute world’ to her and has referred to them as ‘my loves’ and ‘my boys’.

Guy and Bogart regularly featured on her Instagram account, with Guy even appearing in a patriotic knitted Union flag jumper.

Meghan often used the ‘adoptdontshop’ hashtag in her Instagram posts.

It was American comedian and chat show host Ellen DeGeneres who convinced Meghan to adopt Bogart, her first pet, after she bumped into her in a shelter.

The couple share an intensely personal collection of never before seen photographs in the teaser.

They include an emotional Meghan becoming tearful and the Prince and his wife posing up a storm in candid holiday snaps from their time in Botswana in 2016.