Is this the final twist of the Madeleine McCann mystery I’ve investigated for 13 years?

During my 40 years as a reporter I have covered countless epoch-defining events.  Yet the question that most people ask me is invariably the same: ‘What really happened to Madeleine McCann?’

For 13 of those years I have striven vainly, like many others — Portuguese and British policemen, privately hired detectives, investigative journalists — to provide the answer.

The trail has taken me from Praia da Luz — that far-flung Algarve holiday resort whose name will be forever associated with the most disquieting and astonishing child abduction case in history — all across Europe, and even to North Africa.

It has led me, sometimes literally, down countless blind alleys, and thrown up more red-herrings than a capsized trawler.

But perhaps significantly, given last night’s dramatic Scotland Yard briefing, one of the myriad oddballs whose name came up repeatedly during my inquiries lived in a battered camper-van, and had a young German girlfriend with whom he shambled around southern Portugal.

Gerry and Kate McCann talk to the Press after attending a church service in Praia da Luz, days after Maddie disappeared in 2007

I will return to him later.

If, by some miracle, Madeleine is still alive, she will now be 17 years old.

From those early photographs, and computer-enhanced images that have since been created, we can envision a strikingly beautiful girl, slender and blonde.

Given that her parents are both physicians, we can suppose she would be taking her A-levels and applying for a place at a good university.

However, the Madeleine whose disappearance has given rise to countless films, books and articles, and continues to capture international headlines, has been frozen in time.

Certainly, I still think of her the way she looked when I was first dispatched to Portugal, a few days after she was apparently plucked from her bed in Apartment 5A at the Ocean Club resort, as her parents ate a tapas supper in the nearby restaurant: a very pretty girl, nine days away from her fourth birthday, with apple cheeks and an unusual brown ‘flash’ over the iris in her right eye.

Arriving in the resort, dubbed ‘Little Britain’ by locals because so many expats kept apartments and villas there, speculation was rife, and it seemed that everybody had a theory.

The most obvious was that she had been abducted, perhaps by a child sex-fiend or someone who intended to sell her into paedophilia — for the westernmost tip of Europe was well known as a magnet for such unsavoury types. 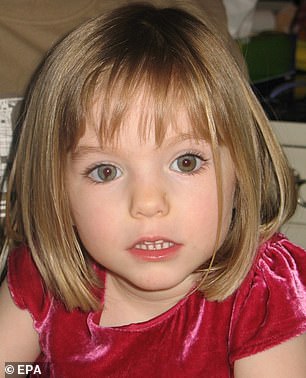 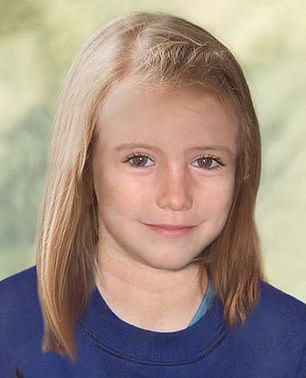 A photo of Maddie issued by the Metropolitan Police is left, and an e-fit (right) shows her aged nine

Since the McCanns and their holiday friends — who quickly became known as the Tapas Seven — were dining at a restaurant which, though only 80 yards from the apartment, was hidden behind a high wall, this seemed a very real possibility.

As there was a large rubbish skip beside the apartment block, which was emptied into a nearby landfill site, some suggested that the kidnapper might have been disturbed by Kate, when she returned to make a half-hourly check on Madeleine and her twin siblings, then killed her in panic and dumped her body.

Then again, perhaps the little girl had been bundled into a car and driven across the border to Spain, less than an hour away, before the unforgivably slow and inept Portuguese police had started to make frontier checks.

Either that, or she had been carried down to the beach and ferried across the Mediterranean to Morocco (a theory that saw me following the same path several months later, when it was claimed that a small, fair-haired girl had been seen being marched along by a middle-aged woman of Arab appearance).

Others offered less macabre explanations for Madeleine’s disappearance in those early days.

At the time major roadworks were underway in Praia da Luz, and a deep trench ran along the road close to Apartment 5A. 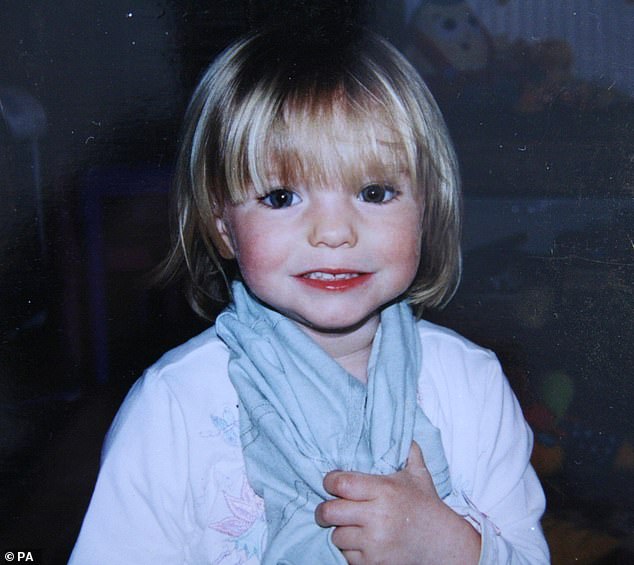 As the months rolled by, and clue after potential clue was explored, the McCanns dealt with their unimaginable torment in very different ways. Above, a photo of Maddie dated May 2005

Suppose that Madeleine — who had been heard to complain, the previous day, that her parents had failed to heed her night-time cries — had woken up frightened and alone, and wandered into the street to look for her mummy and daddy.

Could she have fallen down the manhole and been rendered unconscious?

The theory might sound outlandish, yet it was taken seriously enough for heat-seeking equipment to be used to explore the by-then Tarmacked road several years later.

Some observers — journalists and residents — rushed to judge Robert Murat, an innocent British-Portuguese man, then in his early 30s, who lived with his elderly mother in a house just a couple of minutes’ walk from the apartment.

Mr Murat, the first person to be named as an ‘arguido’, or suspect, by the Portuguese police.

Soon after Kate McCann alerted the Tapas Seven that her daughter was missing, he had joined some 60 locals in a street search.

Then, when the investigation began, he offered to interpret for the McCanns.

All this aroused the suspicion of a female British tabloid reporter, and when she went to the police he was duly arrested.

It wasn’t long before some people’s suspicions began to turn on the couple themselves. Kate is pictured above reporting to a police station in Portimao

I was the first reporter to interview Mr Murat after his release.

After 90 minutes in his admittedly unusual company I was convinced of his innocence and reported my fears that he had become ‘a scapegoat’.

In time, he successfully sued a plethora of other journalists for libel, winning a very substantial pay-out.

As the months rolled by, and clue after potential clue was explored, the McCanns dealt with their unimaginable torment in very different ways.

Gerry, then a spry 39-year-old Leicester heart specialist, seemed to adopt a clinical and business-like approach to the search.

He spent his time travelling the world to meet missing person experts and lobby statesmen for their assistance — he even secured an audience with the Pope.

He also wrote a blog, which many thought unduly chipper.

When First Lady Laura Bush’s Scottish terrier slobbered over him, he joked that the pooch must have known he was a fellow Scot.

Meanwhile, Kate remained in Praia da Luz, staying in a friend’s villa and cared for by family members.

Already pencil slim when the holiday began, she cut a skeletal figure as she jogged over the cliffs above the resort, knelt in prayer at the Roman Catholic church, or spent hours simply gazing out at the Atlantic.

Always she clutched on to Madeleine’s favourite soft toy, a pink animal called Cuddle Cat, which had been beside her in bed on the night she was taken.

On one occasion, I met her as she sat on the rocks and wished her well. Her mouth opened but it took a titanic effort for her to utter a few words of thanks.

Perhaps partly because of Gerry’s refusal, or inability, to show his emotions, it wasn’t long before some people’s suspicions began to turn on the couple themselves.

Public criticism of their parenting standards had started within hours of the abduction.

On radio phone-ins and the nascent social media platforms, many had berated them for leaving their children unattended, and as the months wore on a cruelly orchestrated vendetta was waged against them by internet trolls.

The McCanns, it must be said, didn’t help themselves by courting publicity for their cause at every opportunity, setting up a charity that raised funds by offering £2-a-time bracelets, and had as its signature tune Bryan Adams’ slushy rock anthem Everything I Do, I Do It For You.

They also hired a string of questionable media representatives, including an aspiring Lib Dem politician who thought it would be a good photo-op if the couple visited an orphanage.

Thankfully, the couple were not persuaded.

Behind the scenes, however, the Portuguese police — led by an out-of-his-depth and misguidedly ambitious inspector named Goncalo Amaral — were also coming to the opinion that Kate and Gerry were probably implicated in Madeleine’s disappearance.

So, as the summer season drew to a close, Madeleine’s parents were shockingly arrested and accused of being suspects.

To my lasting shame, having listened to what Amaral and his cronies had to say — about traces of Madeleine’s blood supposedly being found in the couple’s hire car, and other fallacies — I briefly shared their doubts, and wrote as much.

It was only later, when the full extent of their bungling ‘detective work’ was exposed that I penned a humble mea culpa.

And so, as the years passed by and little girls resembling Madeleine were reportedly sighted on every continent, this seemingly unsolvable saga rolled on. 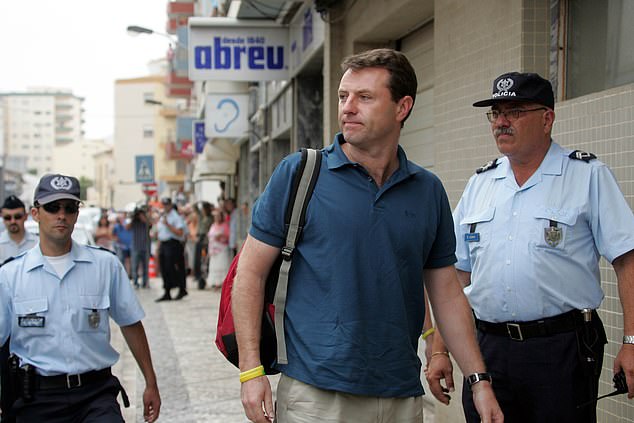 In the light of last night’s news, the most intriguing breakthrough may have come in 2009, when sources told me how, when staying in a flyblown town near Praia da Luz, they had met father-of-four Raymond Hewlett, then 64.

A thrice-jailed child sex attacker, the scraggy-haired and unshaven Hewlett travelled around Portugal and Spain in an old blue Dodge, converted into a camper, van with his German girlfriend, then in her 30s, and, according to the source, he had been staying near the resort when Madeleine was taken.

When this tip-off was relayed to two former British police officers hired by the McCanns to probe the case, they duly sought him out in a German hospital, where he was being treated for cancer of the oesophagus, and described him as their most promising suspect.

However, the wheelchair-bound Hewlett screamed obscenities at the private investigators, and declined to answer any questions. The following year he died.

Given that the new suspect lived a transient lifestyle in the seedy camper-van community that treks around Europe, however, and given that he is in prison in Germany, we must wonder whether he and Hewlett were somehow connected.

For the sake of two much-maligned and forever tormented parents, we must hope that the truth is about to emerge at long last.