Is this the most glamorous photo album ever? Jack Morris and Lauren Bullen share their snaps

There may well be lies, damn lies and statistics, but 4.8 million followers is a number that definitely widens the eyes.

That is the combined following on Instagram of travelling couple Jack Morris (aka @doyoutravel, 2.8million followers), from the UK, and Lauren Bullen (aka gypsea_lust, two million), from Australia.

And why? Because they post some of the most jaw-dropping travel shots you’re ever likely to see. Ever. 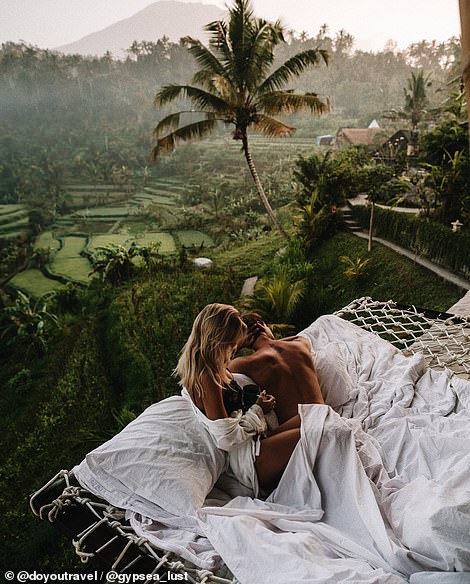 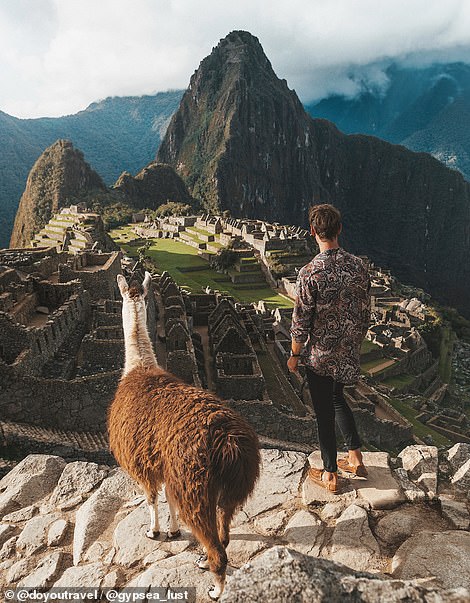 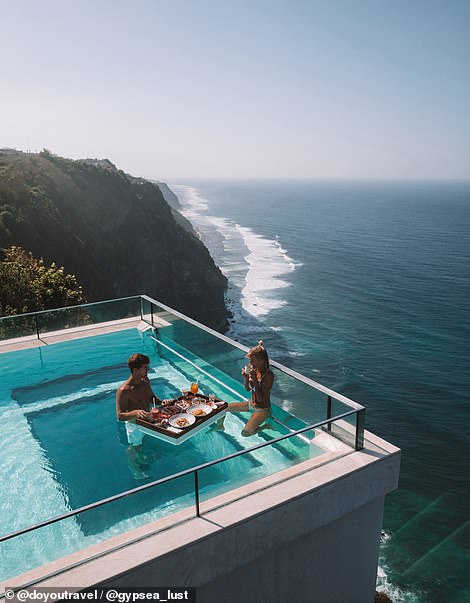 On the left is Jack taking a look at Machu Picchu. On the right he’s pictured relaxing with Lauren in Bali in a rather stunning pool

And no, they don’t get a pro to snap them.

If they’re both in the shot it means they put the camera on a tripod and took the image using a timer.

The couple aren’t new to MailOnline, but we couldn’t resist the opportunity to publish a new batch of their images, with their kind permission.

MailOnline Travel asked them by email what the secret to their success is. 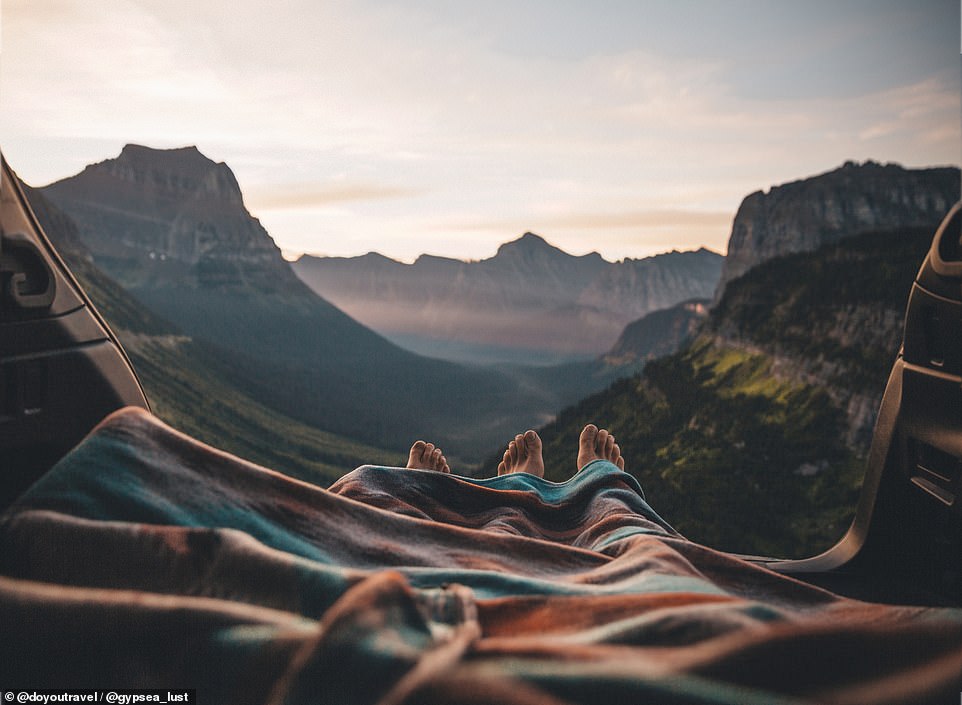 Jack and Lauren have been signed up by Brand USA to snap the country in all its glory for its #UnitedStories campaign. Here they are having a toe-tally awesome time in Montana 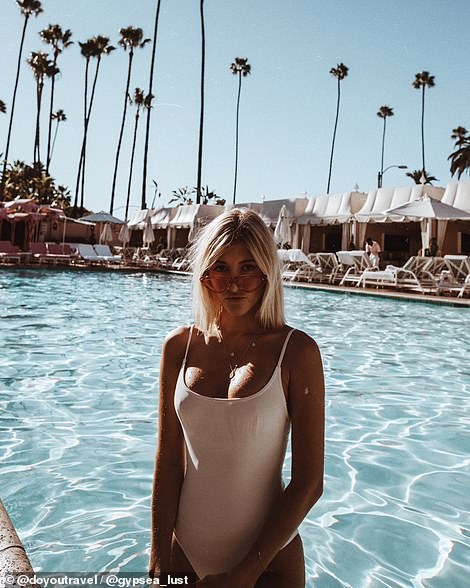 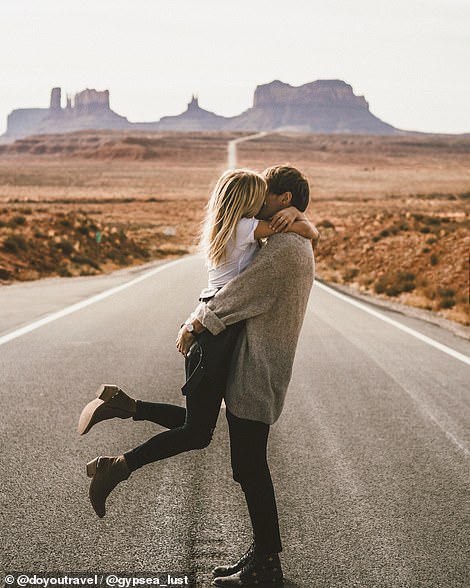 Lauren soaks up the rays in LA (left) and has a kiss and a cuddle with Jack in Monument Valley, Arizona, on the right 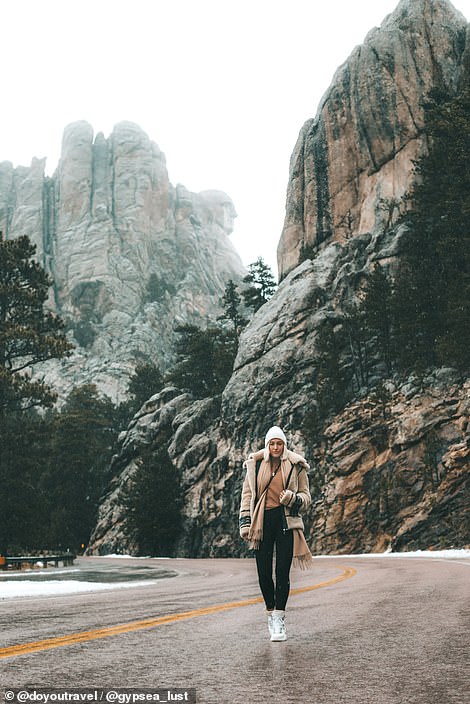 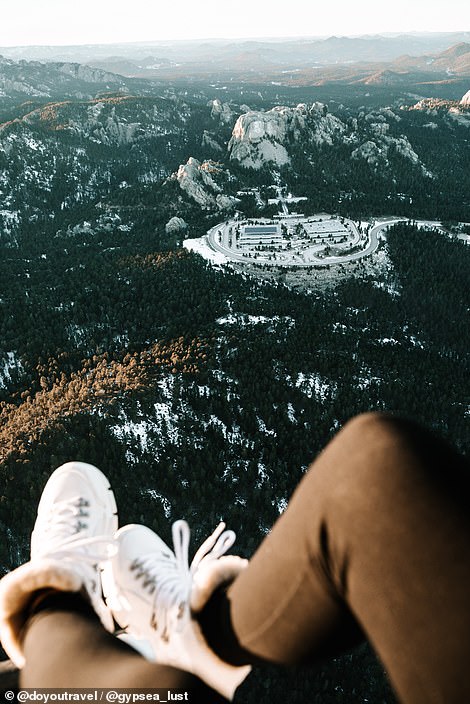 Lauren goes for a stroll by Mount Rushmore in South Dakota (left) and gets an aerial view of it (right), too 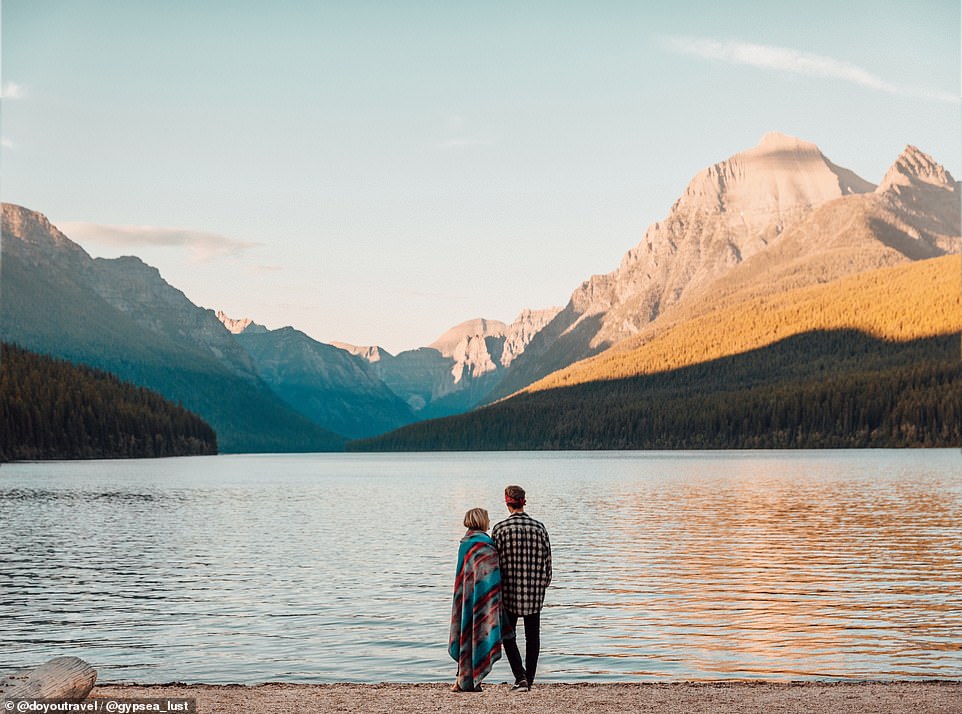 Wonderful wilderness: The couple take in the epic scenery at Glacier National Park in Montana

They replied: ‘We both had different stories in the very beginning but it came from the same passions – I guess there’s no “secret” as such and everyone will grow differently and to different levels.

‘With that said consistence, originality, and following a passion are three major aspects to growth. You’ve got to enjoy what you’re doing, too. Growing a following is fun and opens a lot of doors but that shouldn’t ever be the main goal.’

And do they ever get jealous of each other’s shots?

Jack said: ‘I wouldn’t say we ever get jealous because we’re always trying our best to help each other. Naturally there’s been a few occasions where we’ve had disagreements on who gets to post a “banger” first, but most of the time we try to mix things up and create two different shots out of the same scenario.’ 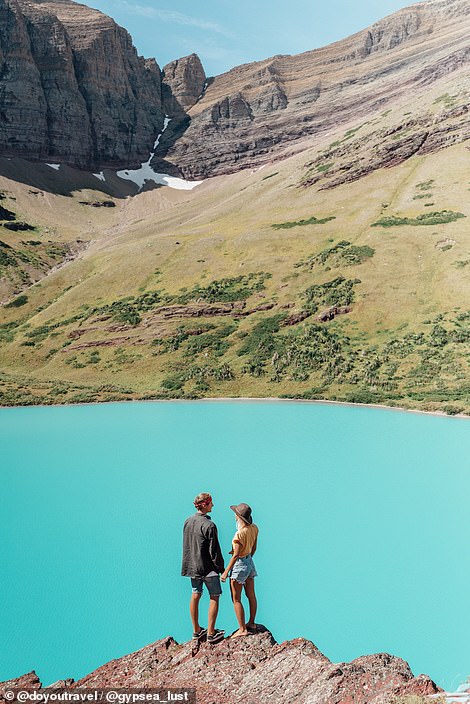 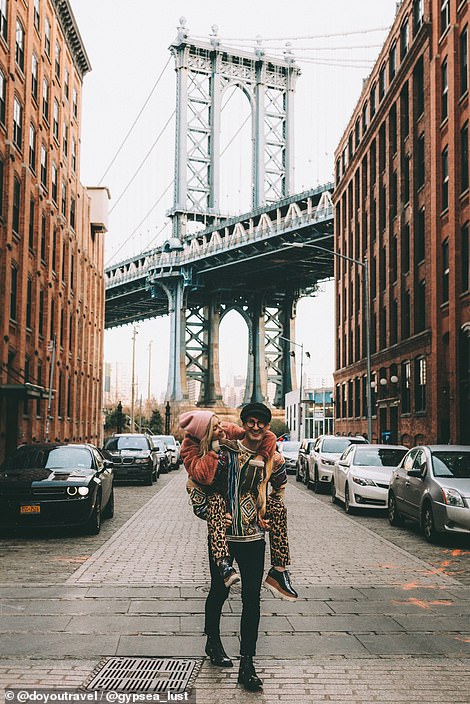 If it’s eye-bulging scenery you want, Montana is the place to go (left). Lauren hitches a ride in New York (right) 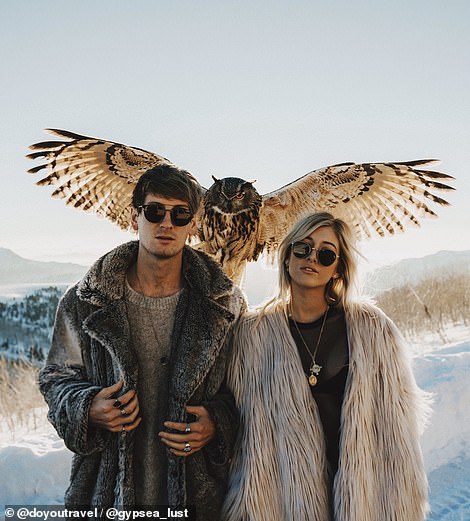 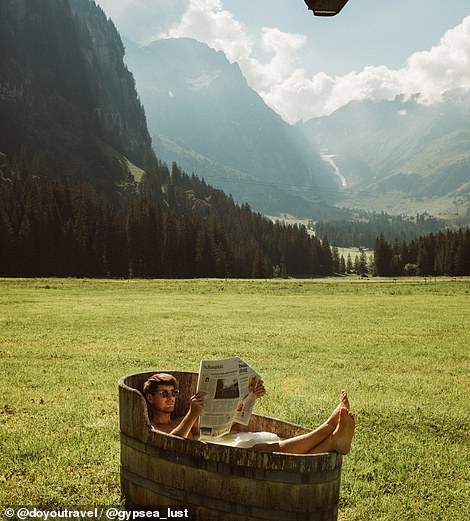 In Utah Jack and Lauren had a hoot – with this owl (left). Jack relaxes in a wooden tub amid the mind-boggling scenery of the Swiss Alps (right) 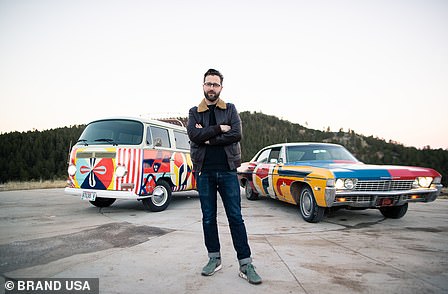 He said: ‘As a nation, we want to share our stories with the world and invite them to experience our people and destinations first-hand. United Stories will help travellers understand places more deeply, meet real people, and uncover local perspectives to activate their wanderlust.

‘Global travellers are increasingly looking for local experiences that can’t be found in travel brochures. This campaign is an open invitation to visit the USA, experience the warmth of the American people, and engage with the vast diversity of our destinations. A trip to the United States is perpetually new.’

To get travellers’ wanderlust fired up, Brand USA is driving influencers like Jack and Lauren around in various eye-catchingly painted vehicles – the designs are by French street artist Etienne Bardelli – so they can hop out at points of interest, take amazing pics, then upload them from in-vehicle computers.

The couple met in March 2016 while on a job together in Fiji.

They were both already Instagram-famous at that point.

Jack, from a small village just outside Manchester, has been travelling since 2012. Before that he was a carpet cleaner for four years.

Lauren, meanwhile, from Lennox Head, was a dental assistant before she became one of the world’s most influential influencers after she began posting in 2013. 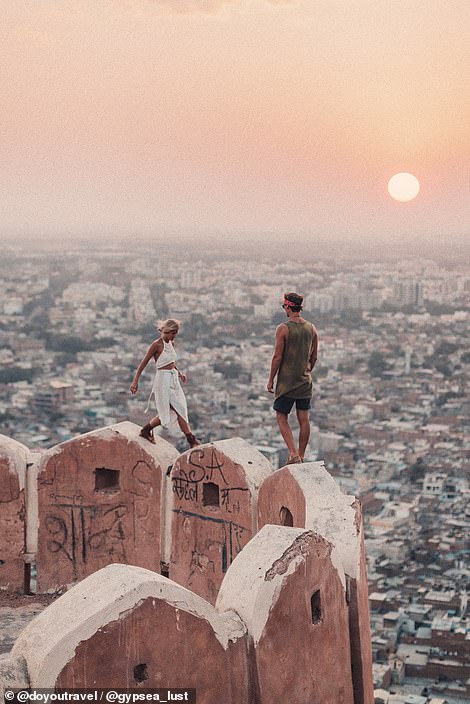 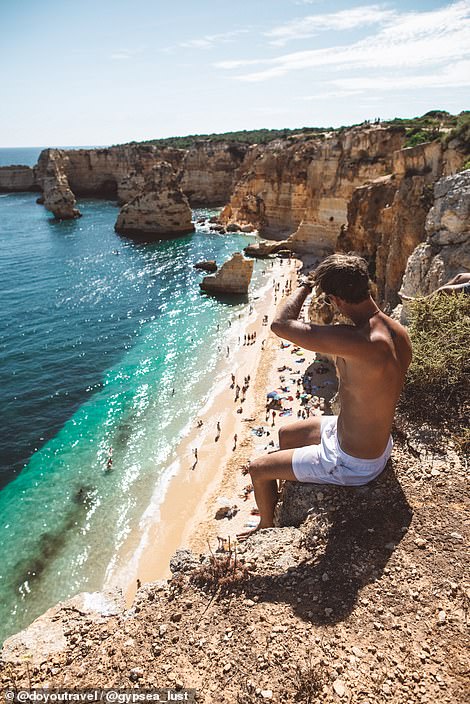 In Jaipur in India the couple displayed their derring-do (left). Jack peers down at sunseekers in the Algarve (right) 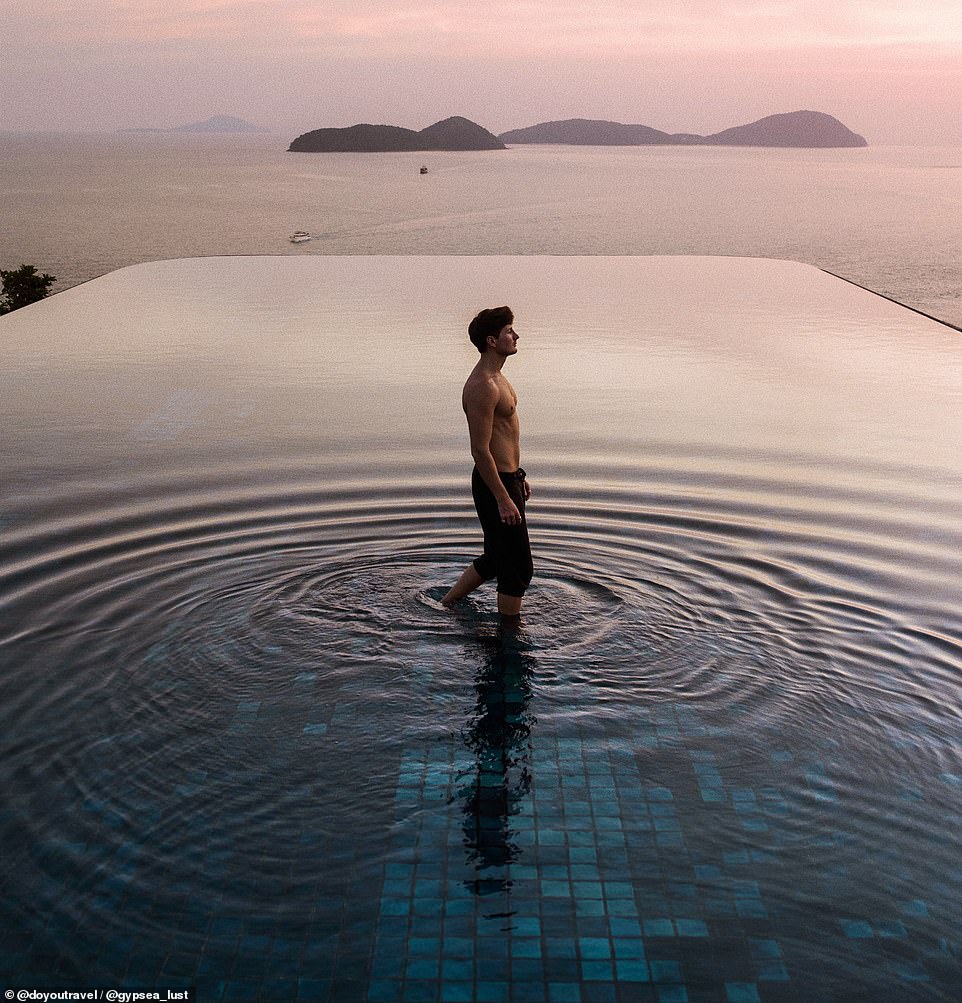 Jack said that they never get jealous of each other’s shots and that they generally try to help each other out. Here’s Jack in Thailand strolling around a rather tempting-looking infinity pool 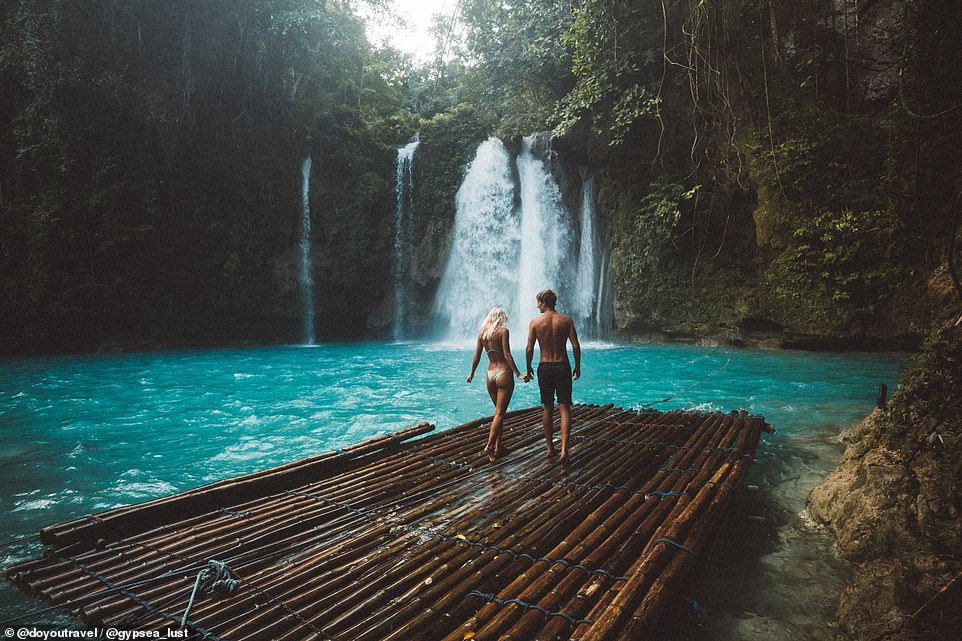 Paradise found: The pair walk hand in hand in a beautiful lagoon in the Philippines

They now often get paid big bucks for their snaps and their online clout is such that they have been signed up by Brand USA for its ‘United Stories’ tourism campaign, alongside actress Alyssa Lynch and other Instagram stars.

The aim is for the influencers to generate content and showcase the breadth and depth of the USA ‘like never before’.

So off to the USA they went.

The project launched in South Dakota, home to Belle Fourche, the geographic center of the United States.

‘There are so many parts of the country we love,’ they said. ‘It’s so diverse, from the tropics of Miami and Hawaii, the cities of LA and NY which are both so opposite but incredible, and then there’s the inner states we have explored like Utah, Montana and now South Dakota!

‘South Dakota really surprised us. We hadn’t heard much about it prior to this trip so didn’t have a whole lot of expectations. We had heard of Mount Rushmore but had no idea where exactly it was. We were really surprised at how beautiful the Mid-West can be! I think especially since we visited during the off season and not many tourists were around it was super relaxing. It almost felt like we had all these incredible spots to ourselves. The people were also really friendly which always makes a destination more memorable.’

For more on United Stories visit www.visittheusa.com/UnitedStories and look for the #UnitedStories hashtag online.