Is THIS the most luxurious chicken coop EVER?

Which is how, earlier this week, I found myself lying prostrate on the grass attempting to construct the latest, most high-tech hen house on the market.

Where once your typical chicken coop was a ramshackle affair knocked together from a few planks of wood and some wire, the growing flock of modern-day poultry keepers – David Cameron included – demand something a little more in keeping with the times.

Which is where the flat-pack Eglu Cube designed by the clever folk – or should that be yolk – at a cutting-edge British company called Omlet comes in to play.

Tom Rawstorne (pictured) gives his verdict on the flat-pack Eglu Cube designed by the clever folk, after spotting former Prime Minister David Cameron assembling one for his chickens

Fashioned largely from colourful, moulded plastic, not only does it look good, it promises to protect your flock from everything from foxes to frostbite.

Which is just as well given that the number of novice chicken keepers has absolutely exploded during the coronavirus lockdown; Omlet’s sales alone are up a staggering 250 per cent.

While some are desperate to guarantee a supply of eggs in the face of empty supermarket shelves, others are turning to chickens to keep themselves and their children entertained during lockdown.

At Easter, Samantha Cameron posted pictures of herself on a sofa at home with half a dozen gorgeously fluffy chicks perched on her arms and shoulders.

‘My daughter Flo persuaded us that she would be tormented in the potential lockdown by her older siblings and so needed chicks to hang out with as she couldn’t see any friends,’ Mrs Cameron revealed. ‘We are all obsessed. They’re really adorable.’

Ever since, the couple and their three children – Nancy, 16, Arthur, 14 and nine-year-old Florence – have been raising the baby birds in the hall of their Oxfordshire house. The trouble is, as any parent knows, there comes a time when your little ones have to spread their wings and move to a home of their own. 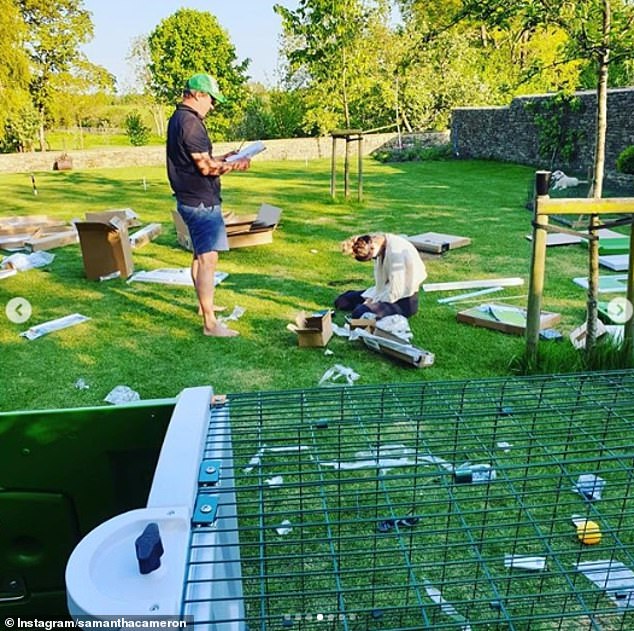 All cooped up! David Cameron, 53, was photographed building a flat-pack chicken coop with daughter Nancy, 16. Pictured: In the garden of the family’s Oxfordshire home

But judging by a string of hilarious Instagram photos posted by Mrs Cameron earlier this month, the former PM would do well to steer clear of ‘self-build’ projects in the future.

‘Flat pack hell?’ she wrote. ‘Dave and Nance trying to construct new high tech chicken coop. Moving them this weekend from sleeping in our hall to their coop. Children suffering from separation anxiety at the thought of the chicks leaving home!’

With packaging and parts strewn across his garden, the pictures show 53-year-old Mr Cameron struggling to get to grips with the project. One image even shows him lying on his back on the grass inside the wire cage of the coop, while Nancy offers guidance from above.

‘Maybe it shows his creative mind, but his approach seems to have been to unpack literally everything, throw it around the garden and then start trying to assemble it like that,’ Omlet co-founder Johannes Paul observed when we spoke. ‘Generally we recommend getting the manual out, doing page one, then two, then three – and that works quite well. 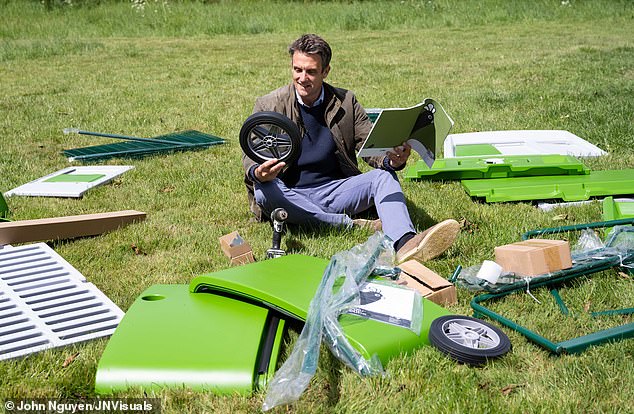 Tom (pictured) who has kept chickens on and off for more than a decade, attempted to assemble the £749 Omlet coop with his ten-year-old daughter Martha

‘There is nothing particularly skilful about putting them up – they just clip and screw together. And when you have finished you get such a sense of achievement.’

And so it was with some trepidation, but great excitement, that earlier this week I took delivery of the same £749 Omlet coop that caused so much head-scratching among the Cameron family. I have kept chickens on and off for more than a decade, and our three hens’ current accommodation has been long overdue an upgrade.

Following Johannes’ advice, I began by closely studying the instructions.

First up was the construction of the part of the hen house where the chickens sleep at night. Made of double-walled plastic for insulation against the elements, it also boasts a separate section in which hens can lay their eggs, a near-daily occurrence for most standard breed chickens.

Aided by my ten-year-old daughter Martha, we set about screwing together the metal frame on which the ‘house’ would sit. As Johannes warned there are plenty of parts but fitting them together was straight forward – as was slotting in the pre-made ladder, complete with non-slip steps, up which the hens will head to bed.

Next up was a bit of work on the wheels, designed to allow you to move the contraption onto fresh grass whenever needed. Because as Mr Cameron will no doubt discover, hens may be lovely to look at, but they also love a good scratch – so say goodbye to your carefully-manicured lawn. 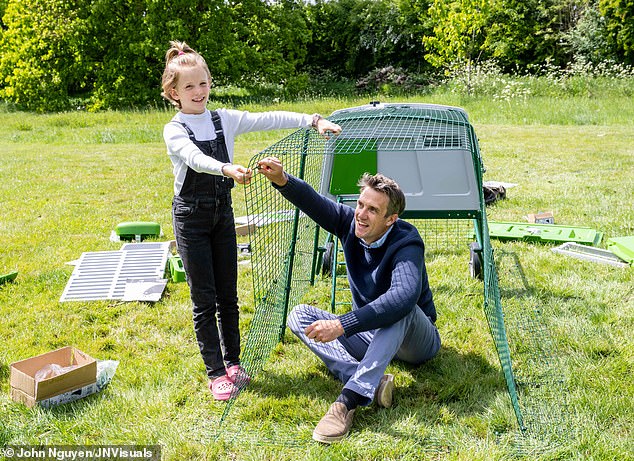 Tom said the coop features two external openings, which are crucial for collecting the freshly-laid eggs. Pictured: Tom and Martha

With the skeleton of the house in place, the next rather fiddly task is to construct the mesh run. To stop foxes digging beneath it, the Eglu comes with mesh ‘skirts’ that stick out horizontally all around. The idea being that when Mr Fox comes along he hits the side of the run and then starts to try to dig underneath it – only to hit more meshing.

With the run in place, we finish off the house, constructing the walls and the roof – a process that, like Mr Cameron, sees me adopt a recumbent position to tighten a couple of hard to reach screws.

The coop features two external openings. The one at the front is for the hens to come and go, via the natty little ladder. Another to the side allows easy access to the egg-laying compartment. This is crucial – after all, the best bit about keeping hens is collecting the freshly-laid eggs. Both doors close with cleverly designed handle mechanisms.

After a bit of further fine-tuning, in goes the removable tray on which the chicken’s droppings will fall as they roost at night. Then, with the food and water holders in place, the cube is ready to welcome its first guests. I even install a chicken swing on which the girls can hang around on if they feel so inclined. 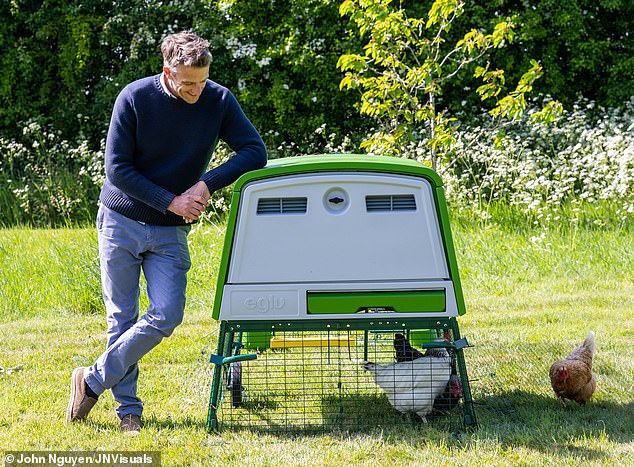 Tom (pictured) revealed the complete assembly of the chicken coop took over three hours, but everything slotted in to place as directed

In all, construction has taken a touch over three hours. Quite a chunk of time, but everything slotted in to place exactly as it was supposed to so my flat-pack frustration remains at manageable levels.

‘It’s very luxurious,’ says Martha. And, hopefully, the Camerons’ hens will feel equally pampered. If not, they can always seek alternative accommodation.

Soon after the Camerons moved back to their Cotswolds cottage following his resignation as PM, Mr Cameron revealed he had purchased a £25,000 shepherds hut for the garden.

With sheep’s-wool insulation and mod cons including dimmer light and classic Bakelite switches, the hand-crafted outbuilding – in tasteful Farrow & Ball shades Clunch, Old White and Mouse’s Back – could also double as the perfect hen house.

Still looking for the perfect home for your feathered friends? From the modest to the egg-stremely luxurious, we have an option to cater to every budget… 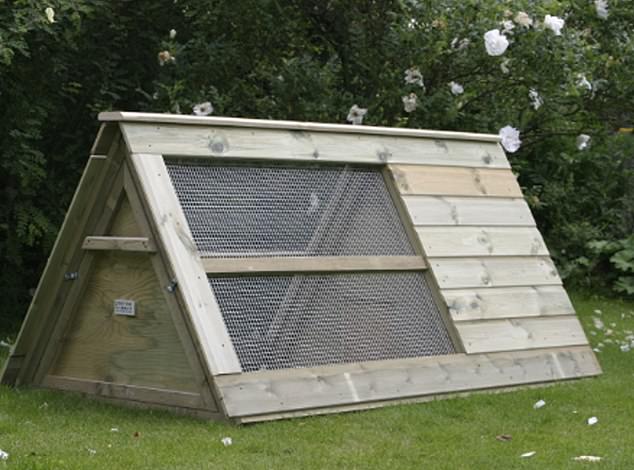 Big enough for three birds, this traditional wooden ark features a galvanised mesh run to keep birds safe and protected during the day whilst the sliding pop hole means they can be shut into their sleeping quarters for extra security at night.

Measuring 6ft long by 3ft high, the house and run doors are easily removable to provide access for cleaning and the non-protruding handles make moving your house to fresh pastures quick and simple. Just pick up and go. 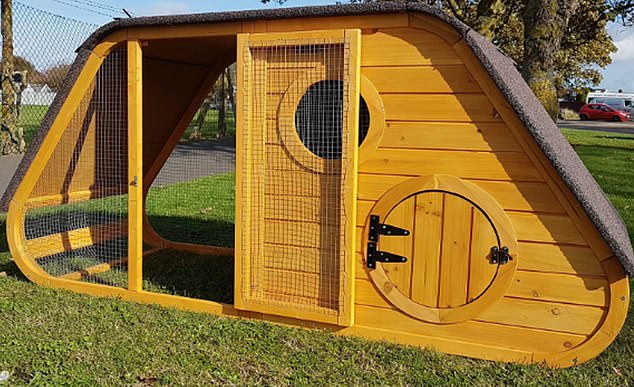 With room for four medium sized chickens, the curves of this coop, which is just under 6ft long and three foot high, are like something out of hobbit land.

Featuring a removable, thick plastic liner for easy cleaning it combines a nest box and integrated run, with a closing door between the two for extra night-time security. Comes flat-packed. 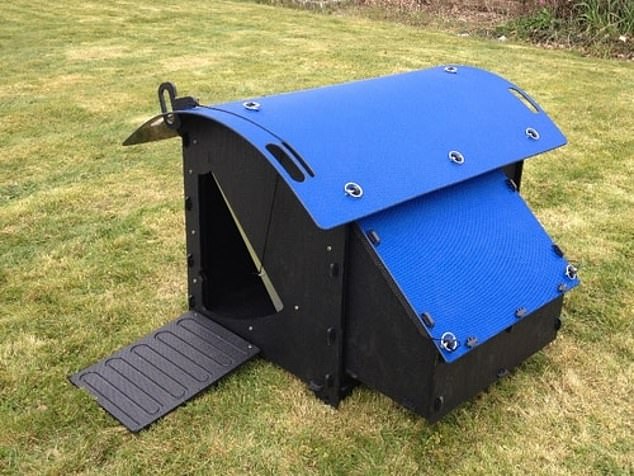 Tom claims Medium chicken house (pictured) has no hiding places for unwelcome insects and pests, with it’s modern take on a traditional design

A modern take on a traditional design, this hen house has room for up to five large chickens and is made from recycled plastic. It features two nest boxes with access to inspect the birds via a full width back door which detaches using quick release pins. Measuring 4ft 6in long and 3ft 3in high, it is designed to be easy to clean and crevice free – meaning no hiding places for unwelcome insects and pests. 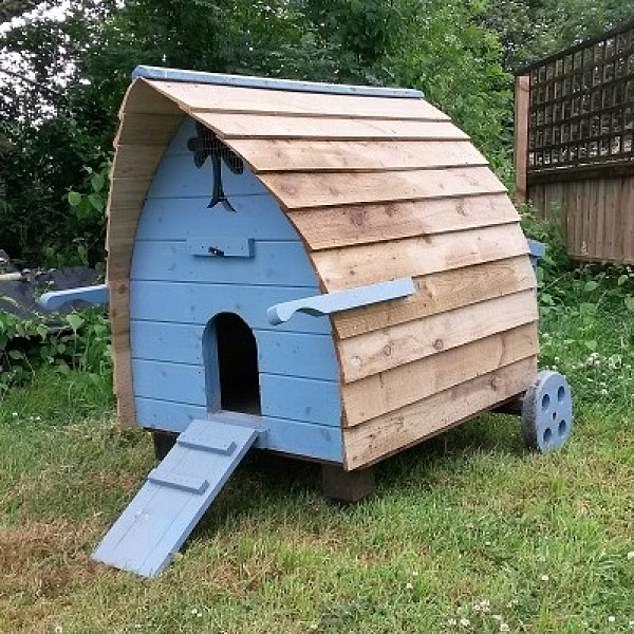 Suitable for up to eight chickens and ideal for those keen for their ladies to enjoy a touch of stylish living. Mounted on the back are two laying boxes with a hinged external door for egg removal while the drop-down ramp for the poultry to access the house also acts as a door that can be locked off to prevent foxes gaining access at night.

The handles and two substantial wheels make it easy to move around the garden.

HOUSE YOU’LL WANT TO MOVE INTO 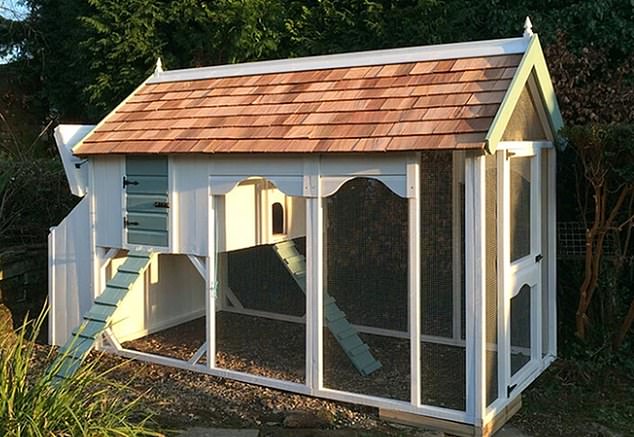 Measuring 10ft x 5ft, this large-walk in chicken house boasts a nesting area to the rear and a large, secure run in the front.

Painted in pastel colours and boasting a tiled roof it’s almost too good for chickens, something that happy customer and TV personality Natasha Kaplinsky bears witness to: ‘We couldn’t be more thrilled with it and would be perfectly happy moving in to it ourselves!!’ 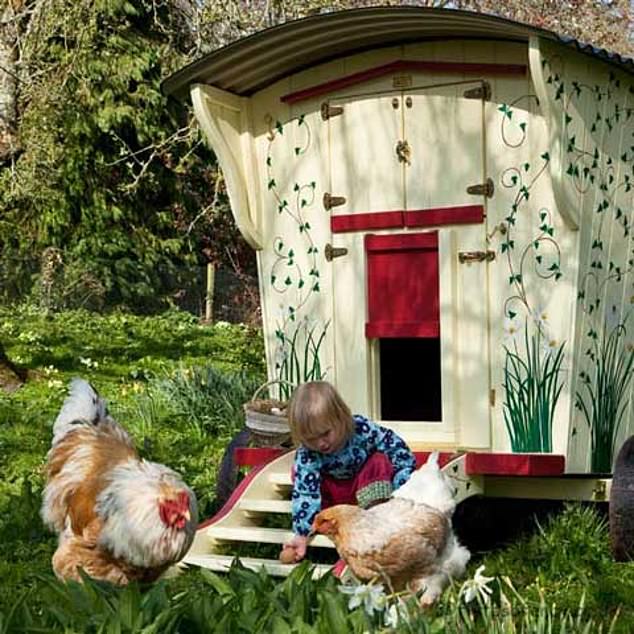 Bespoke luxury for up to 15 lucky ladies, this wagon can be finished with a hand-painted decorative design of the customer’s choice. Individually hand-made by craftsmen in Dorset, it’s built to last a lifetime with a heavy gauge galvanized steel roof with trim-finished edges and brass hinges, locks and latches.

Despite measuring 8ft 7in in length and 5ft 6in high, it can be easily moved thanks to its handmade solid steel, steerable wheels and axles.