ISIS mastermind Abu Bakr al-Baghdadi’s youngest son has been killed in a Russian airstrike, it has been claimed.

Baghdadi’s son died in a bombing raid on a ‘terrorist hideout’ in a Syrian village on September 22, according to an Iraqi commander.

It comes just months after ISIS said another of the terror chief’s five children was killed fighting for the jihadists as a group of fanatics stormed a thermal power plant in Syria.

The youngest son of ISIS mastermind Abu Bakr al-Baghdadi (pictured) has been killed in a Russian airstrike, it has been claimed

Sunday’s claim that another of Baghdadi’s sons had been killed was made by Jabbar al-Ma’mori, a commander in the paramilitary Popular Mobilization Forces, Iraqi News reported.

He is said to have told Baghdad Today: ‘We received certain information that the youngest son of IS chief Abu Bakr al-Baghdadi was killed in an airstrike conducted by Russia on a terrorist hideout in a Syrian village two days ago.’

The commander did not name Baghdadi’s son or give his age.

In July, ISIS claimed another of his sons,  Hudhayfah al-Badri, was killed during an attack on a power plant in Homs.

Al-Badri was killed in an ‘operation against the Nussayriyyah and the Russians’ the group said in a statement alongside a photo of a young man holding an assault rifle. 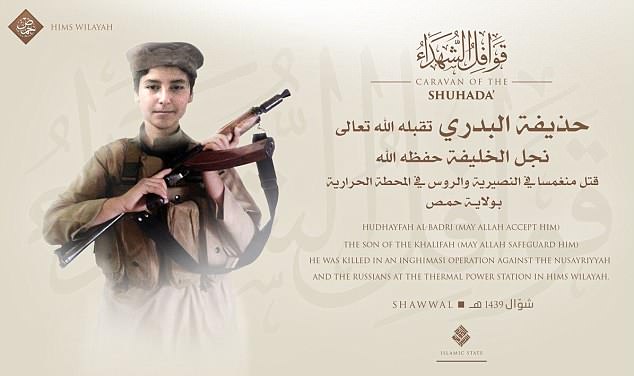 Nussayriyyah is the term used by ISIS for the Alawite religious minority sect of President Bashar al-Assad.

ISIS declared a cross-border ‘caliphate’ in Syria and Iraq in 2014, seizing a third of Iraq during a sweeping offensive.

The jihadists have since lost much ground to separate counter-offensives by Syrian and Iraqi forces as well as US-led operations, and the jihadist presence is now confined to a few holdouts.

The group’s leader Baghdadi, who has been pronounced dead on several occasions, is understood to be hiding in Syrian territory close to the Iraqi border, an Iraqi intelligence official said in May.

Originally from Iraq, Baghdadi has been dubbed the ‘most wanted man on the planet’ and the United States is offering a $25 million reward for his capture.

Last September, in the last voice message attributed to Baghdadi, the ISIS leader called on his fighters in Syria and Iraq to ‘resist’ their enemies.

He had four children with his first wife and a son with his second wife.