She’s never been one to shy away from flaunting her amazing curves.

And Iskra Lawrence was looking sensational in a bright coloured ensemble on Saturday as she joined the arrivals at the Paris Fashion Week Elie Saab show.

The 28-year-old British model looked incredible in a rainbow striped jumper and flared yellow trousers with a thigh split as she headed to the fashion event in the heart of the French capital.

Beautiful: Iskra Lawrence was looking sensational in a bright coloured ensemble on Saturday as she joined the arrivals at the Paris Fashion Week Elie Saab show

Never one to shy away from confidently flaunting her figure, Iskra was strutting her stuff as she exited the car to head into the fashion show.

The model – who’s also been a strong advocate for body confidence – was rocking a striped jumper with a rainbow of bright colours, perfect in the blazing Paris sunshine.

She teamed the top with bright yellow thigh-split trousers, which showed a hint of her amazing legs.

Iskra added some height to the look in the former of heeled sparkling sandals, and made sure to add some simple accessorised in the form of a baby pink Lulu Guinness SS19 chain-strap bag.

Dramatic: The model – who has always been a strong advocate for body confidence – was a ray of sunshine in her bright coloured look as she arrived for the fashion show 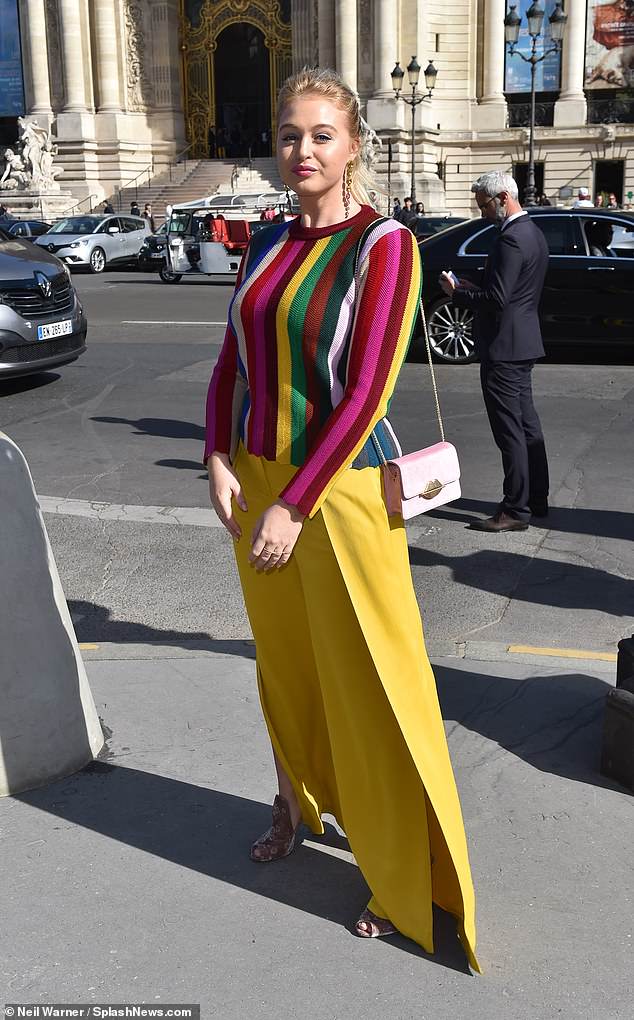 Pretty: Iskra was rocking a striped jumper covered in an array of different coloures with mustard yellow trousers with thigh-high splits

Dressed to impress: Her outfit was accessorised to perfection, as she teamed with peep-toe heels and a cute pink cross-body bag 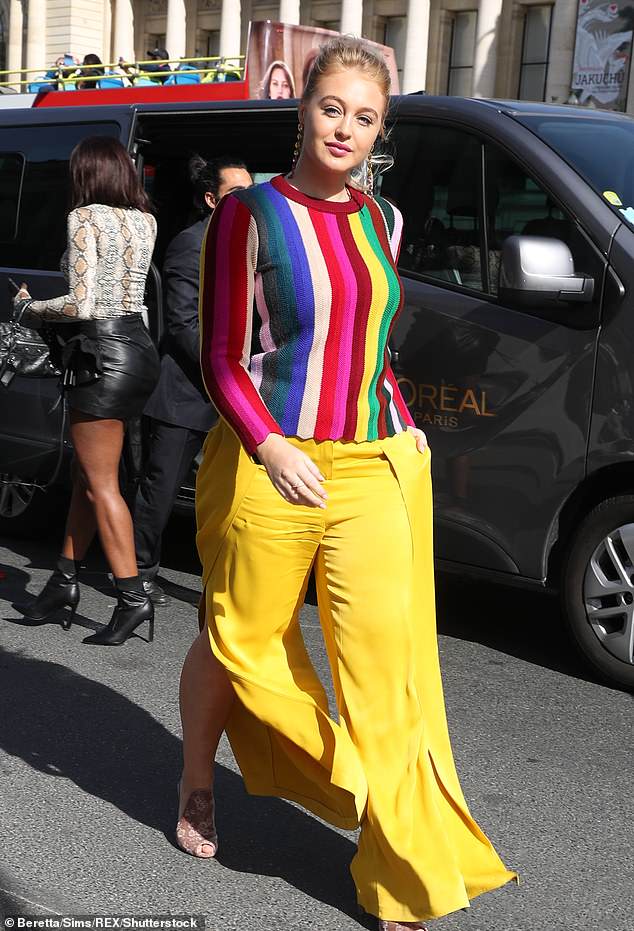 Beaming: Iskra pulled her blonde tresses in a voluminous ponytail and added to the bright look by going for a sparkly smoky eye and nude lip

Last week, Iskra told Femail that she hopes to see all kinds of beauties being celebrated at this year’s Fashion Week.  She said: I want it to be a celebration of all women and a celebration of empowerment’.

‘Fashion is a statement. Every time you get dressed in the morning you decide who you want to be and how you want to feel, and I think that New York Fashion Week is a celebration of that.

‘I love that it ties together so many other things as well including music and culture. I really enjoy coming to Fashion Week and seeing everyone who worked so hard get this time to just shine.’ 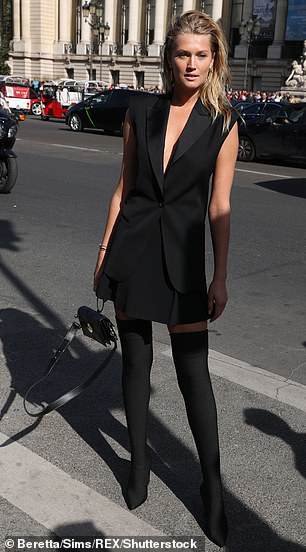 Looking good: Among the star-studded arrivals for the fashion show was supermodel Toni Garrn, who showed some leg in a plunging black waistcoat and thigh-high boots 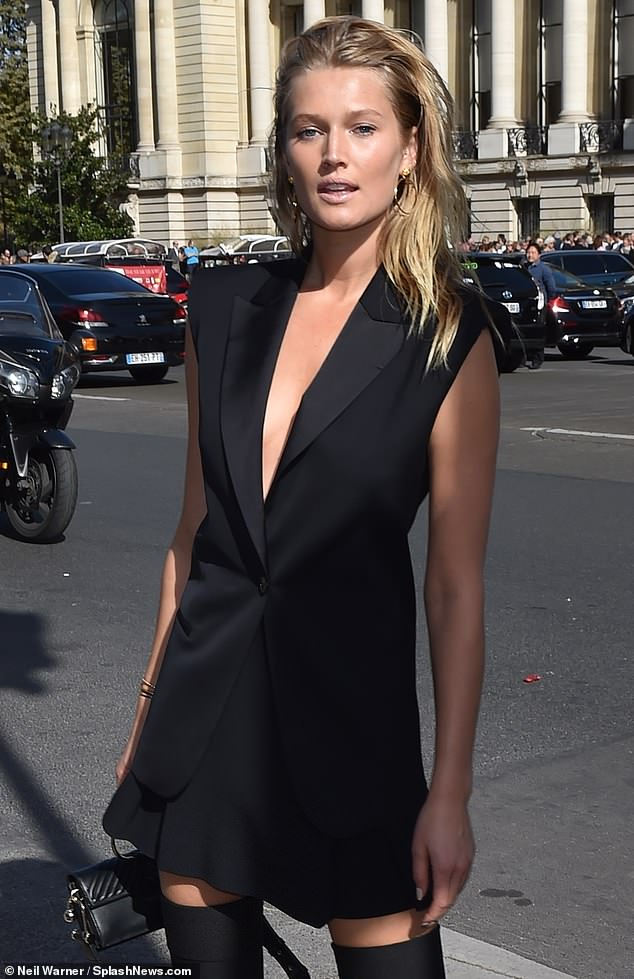 Tousled: The German supermodel had her blonde tresses in a voluminous style swept over the top of her head 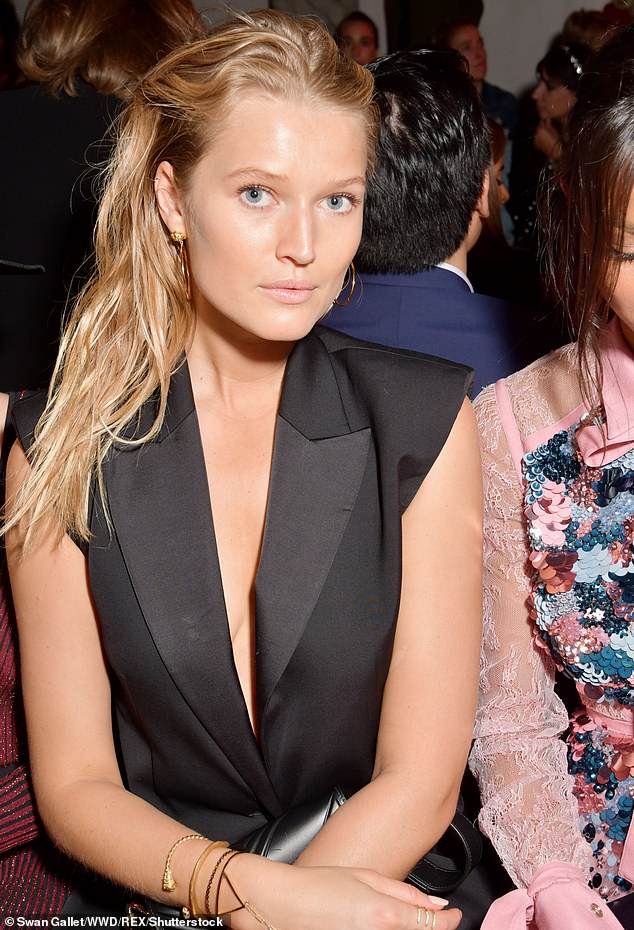 Busty: Toni also showed off her plunging cleavage in the low-cut waistcoat as she took her place front row at the fashion show 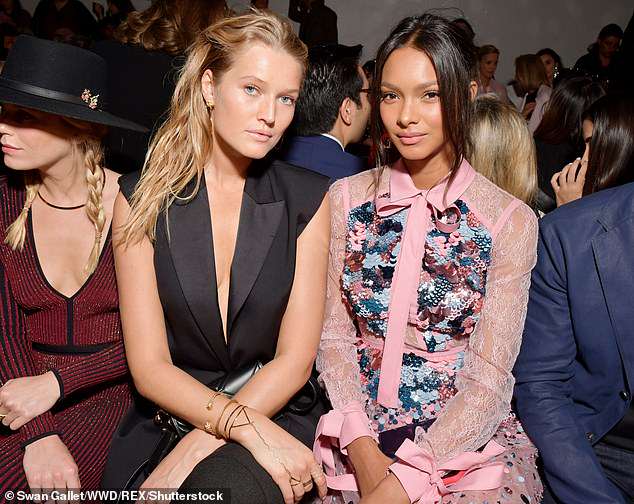 Best of friends: She was perched next to Brazilian model Lais Ribeiro, who was chic in a baby pink lace dress

Iskra, who made her NYFW debut in 2016 for Chromat, doesn’t expect to hit the catwalk during this year’s event, though she’s got a busy Paris Fashion Week between the end of this month and the beginning of October.

Paris Fashion Week is the last of this year’s catwalk season to showcase the Spring/Summer looks, with the series of shows finally coming to an end on Sunday 30th September.

Other designers still to unveil their looks include Balenciaga, Valentiono and Givenchy.

Plenty of the biggest names in modelling have also been seen making their mark onto the runway this year, including Cara Delevingne, Winnie Harlow and Kaia Gerber. 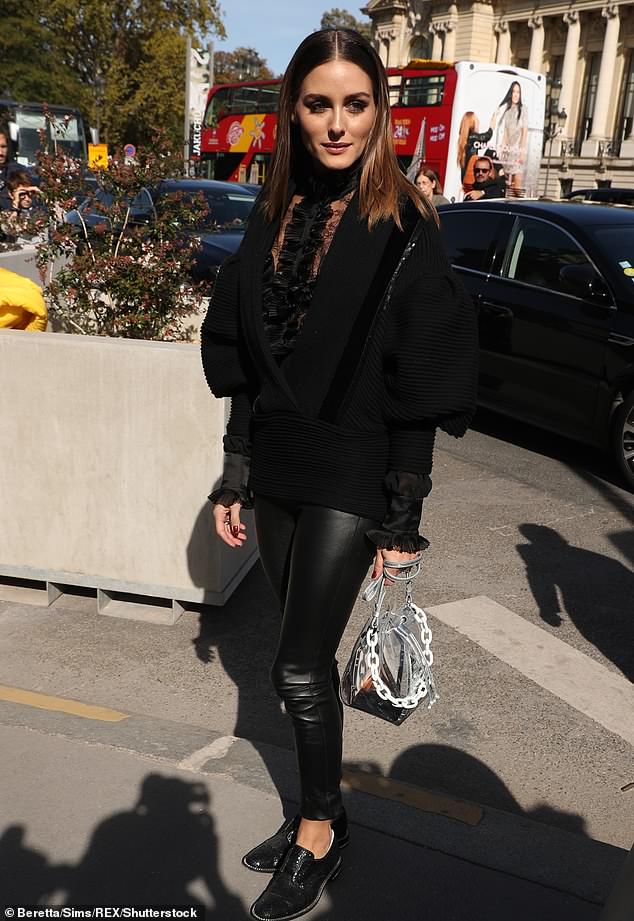 Vixen: Olivia Palermo was a vision in all-black as she teamed a high-neck ruffled blouse with skinny leather leggins as she made her arrival 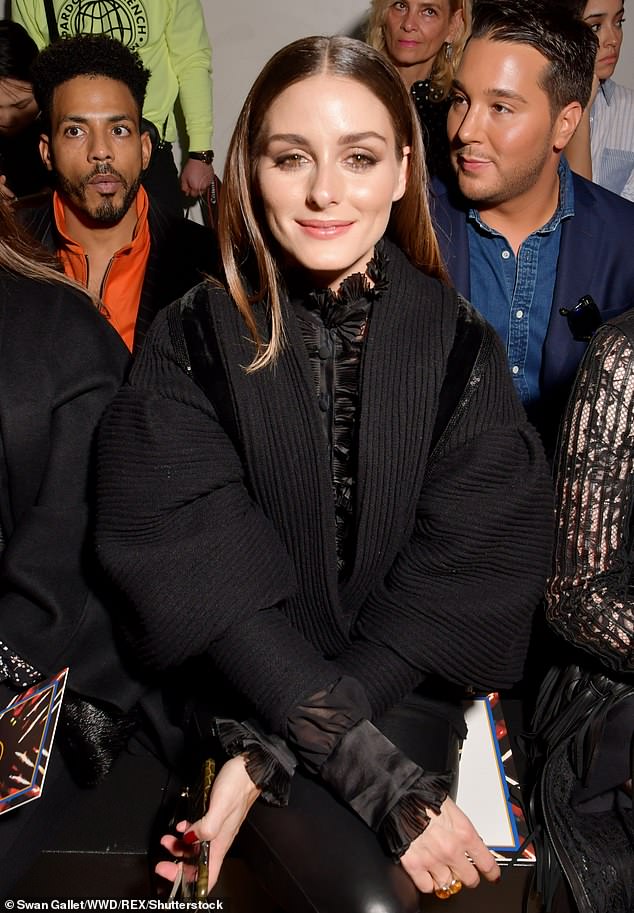 Happy: The entrepreneur was covered up in a ruched black cardigan as she beamed on the front row