This is the incredible image which shows the destruction that fell upon the Isle of Sheppey on Friday night, as a cliffside collapsed into the sea leaving many residents needing urgent evacuation.

The crumbling of the cliffside immediately sent panic through the community and sparked fears of properties crashing down into the sea below.

Local residents of the Kent village have reportedly been left stressed by the situation, with one nearby homeowner telling the BBC that a building was left ‘hanging’ precariously over the edge of the cliffside.

Residents in Eastchurch on the Isle of Sheppey had to be evacuated from their homes after a cliff suddenly collapsed on Friday night, putting properties in immediate danger 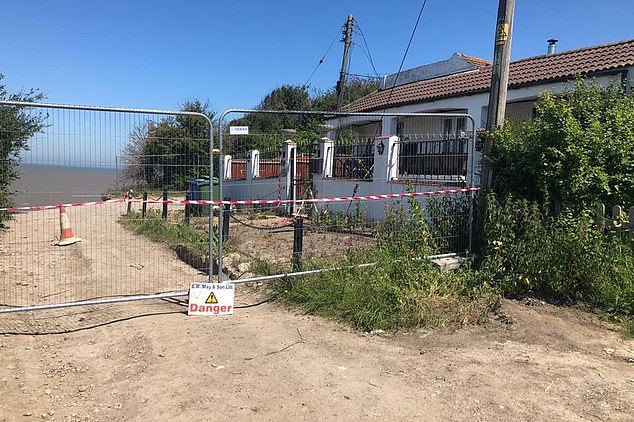 The same resident, named as Malcolm Newell said he first warned authorities in 2015 that action was needed to prevent further erosion.

He added, in conversation with the BBC: ‘This should have been dealt with a long time ago.

‘It’s not right to have people’s home and their livelihoods falling into the sea.’

A fire service spokesman said: ‘Firefighters arrived at the scene to find a large section of the cliff edge had fallen away, leaving a number of properties at potential risk.

‘Members of the public have been asked to stay away from the area due to the direct danger of further cliff collapse.’ 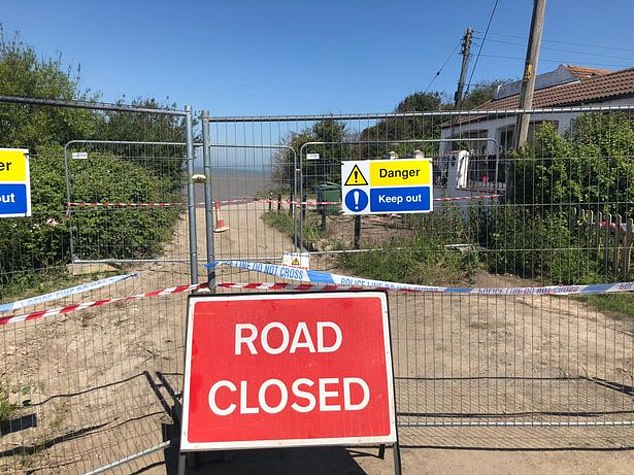 The surrounding area has been closed by local authorities, with footpaths now blocked off and large parts of the beach below inaccessible

One house on the outermost edge of the residential area remains in the firing line – and people are now protected from getting too close by a metal gate and a police cordon.

A small sign at the foot of the fence warns of danger ahead and stops anyone from getting into the house.

Just a short distance ahead is the cliff’s new edge, which now juts inwards and gives a frighteningly steep view down toward the sea.

The residents of the affected house have been offered emergency accommodation by Swale Borough Council.

Kent Fire and Rescue Service said: ‘Around 20 homes were quickly and safely evacuated as a precaution and the occupants were placed into a temporary welfare centre set up in New Road Residents Community Centre. 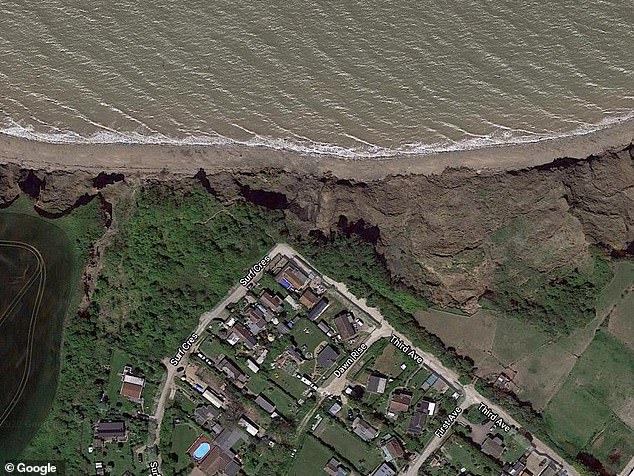 A Google map view shows how close the residential area, known as Surf Cresent, sits to the sea below the cliffs

Kent Police and the local coastguard also attended the scene, with large parts of the beach being completely shut off in the aftermath.

Footpaths in the general area have also been cordoned off, as local services bid to start a safety and clean up operation.

There were no injuries and those evacuated from their homes were given shelter overnight at New Road Residents Community Centre.

Swale Borough Council has since returned most of the residents to their homes – though 13 people from two households have not yet been able to go back and are still awaiting further action.

Cllr Roger Truelove, leader of Swale Borough Council, said: ‘This is shocking news, and we will do all we can to help people.

‘Along with our own officers, I would like to thank Kent Fire and Rescue Services, Kent Police, HM Coastguard and the utility services as well as our own council officers for their prompt response and trustees from the New Road Community Centre for their help in temporarily accommodating the affected families overnight.’