An Israeli military court extended the custody of a Palestinian teenager and her mother on Thursday after a video showing her slap two soldiers went viral and sparked heated debate.

Ahed Tamimi, 16, was ordered held until Monday along with her mother Nariman, 43, a military spokeswoman said.

Her cousin Nour, 21, is to be released on Sunday if no new evidence is presented by then, according to the spokeswoman.

A few dozen Palestinians protested against their detention near the gate of the military prison in the occupied West Bank where the court is located, with Israeli forces dispersing them with sound grenades and tear gas.

Palestinian Ahed Tamimi, 16-year-old prominent campaigner against Israel’s occupation, appears at a military court at the Israeli-run Ofer prison in the West Bank village of Betunia

Ahed Tamimi and her mother were arrested on December 19, while her cousin was taken in by security forces the next day.

Tamimi has been lauded as a hero by Palestinians after a video from December 15 went viral showing the teenager slap and kick two Israeli soldiers in her village of Nabi Saleh in the occupied West Bank.

She has been involved in a series of previous confrontations, leading Israelis to accuse her family of using her as a pawn in staged provocations.

Palestinians however say she is engaged in legitimate resistance against Israel’s 50-year occupation of the West Bank.

The video appears to have been filmed next to the Tamimi house in Nabi Saleh near Ramallah. 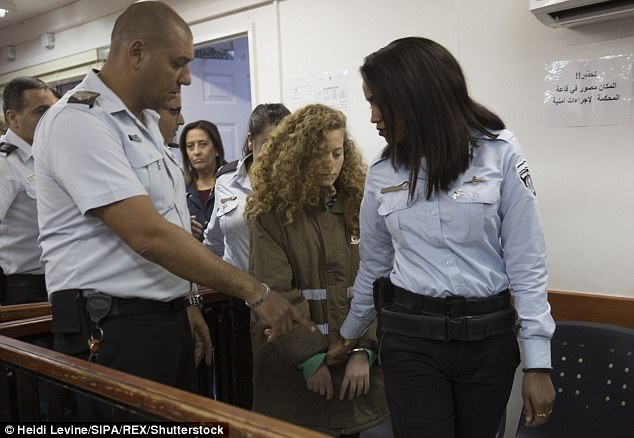 The incident occurred during a day of clashes across the West Bank against US President Donald Trump’s controversial recognition of Jerusalem as Israel’s capital.

Violence since Trump’s decision has left 12 Palestinians dead, with most killed in clashes with Israeli forces.

The Tamimi family says a relative was shot in the head with a rubber bullet during protests the same day the video was filmed. 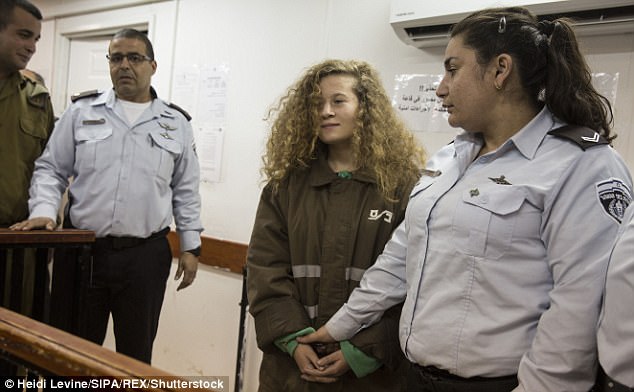 Some Israelis hailed the restraint of the soldiers, but others said the Tamimis’ actions merited a tougher response and called for a heavy sentence

The footage shows Tamimi and her cousin approaching two Israeli soldiers and telling them to leave before shoving, kicking and slapping them.

The heavily armed soldiers do not respond in the face of what appears to be an attempt to provoke rather than seriously harm them.

They then move backwards after Tamimi’s mother Nariman becomes involved.

Some Israelis hailed the restraint of the soldiers, but others said the Tamimis’ actions merited a tougher response and called for a heavy sentence.

Ahed Tamimi has become something of an icon for Palestinians.

She was photographed biting the hand of an Israeli soldier in 2015 to try to stop the arrest of a brother.

A years-old photograph of her raising her fist at a soldier led to her being received by then Turkish prime minister Recep Tayyip Erdogan in 2012.