The Israeli military said it intercepted four rockets being fired into its territory, from Syria, moments before ‘retaliatory’ explosions were heard in Damascus.

‘Four launches were identified from Syria towards Israeli territory which were intercepted by the Israeli air defence systems,’ the military said in a statement.

‘No hits on Israeli communities were identified.’

Israeli army tanks are pictured in the Israeli-annexed Golan Heights on the border with Syria on November 12, 2019. On November 19 the Israeli military reportedly intercepted four rockets fired from Syria

There was no immediate official comment from Syria, but the SANA state news agency reported explosions were heard near Damascus International Airport, indicating a potential Israeli retaliatory strike.

The Israeli military would not comment on the latest reports of explosions in Syria’s capital, but Defense Minister Naftali Bennett was convening the top military brass in Tel Aviv to discuss the latest developments.

Speaking on Israel Army Radio this morning, Israel’s foreign minister Israel Katz was equally vague, saying only that ‘Israel will act in the way it sees fit.’

The Syrian Observatory for Human Rights said the rockets were fired from positions around the capital held by groups loyal to the Damascus government.

It also reported ‘missile fire by Israeli aircraft on positions south and southwest of Damascus’.

It did not elaborate on which group had launched the rockets or whether there had been any casualties in the retaliatory strikes. 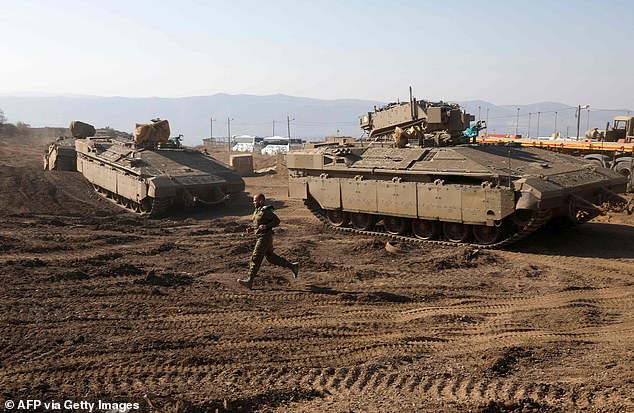 An Israeli soldier runs past army tanks stationed in the Israeli-annexed Golan Heights on the border with Syria on November 12, 2019. The photo was captured on the same day of the Israeli strike on Damascus which hit the home of a leading Palestinian figure, killing his son and granddaughter

The latest flare-up in the region comes a week after an Israeli strike targeted a top Palestinian militant in the Syrian capital, in what appears to be a failed assassination attempt.

Akram al-Ajouri, a member of the leadership of the militant Islamic Jihad group who is living in exile in Syria, survived the attack – but his son and daughter were killed.

The attack on the militant member came the same day as Israel’s targeted killing of Baha Abu al-Ata, a commander of Palestinian militant group, Islamic Jihad, which is allied with Damascus.

In response to the killing of its commander, Islamic Jihad, which is allied with Gaza’s rulers Hamas, fired around 450 rockets towards Israel, which struck back with more air strikes.

The flareup saw 34 Palestinians and no Israelis killed.

A ceasefire between Israel and militant groups including Islamic Jihad was agreed after 50 hours of clashes, but the deal remains precarious.

Israel has carried out frequent air and missile strikes against targets inside Syria since the country descended into civil war in 2011.

Most have been against what Israel said were Iranian targets or positions of Iran’s Lebanese ally, Shiite militant group Hezbollah.

Both are sworn enemies of Israel and both have backed Syrian President Bashar al-Assad’s forces with advisers or fighters.

The latest flare-up comes amid heightened tensions between Israel and Iranian proxies along its borders. Israeli Prime Minister Benjamin Netanyahu has issued a series of warnings recently about Iranian aggression throughout the Middle East. 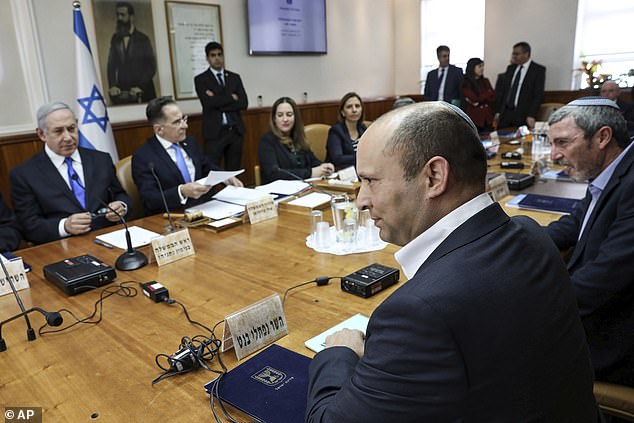 Iran has forces based in Syria, Israel’s northern neighbor, and supports Hezbollah militants in Lebanon. In Gaza, it supplies Islamic Jihad with cash, weapons and expertise.

Netanyahu also has claimed Iran is using Iraq and far-off Yemen, where Tehran supports Shiite Houthi rebels at war with a Saudi-led coalition backing the government, to plan attacks against Israel. Hamas also receives some support from Iran.

At the same time, Iran’s regional influence is being challenged by unprecedented, economically-driven mass protests in Iraq and Lebanon – two countries where Tehran wields major influence. The protests are creating unrest that Tehran fears would spark a backlash against Iran-backed proxy militias in those countries.

Iran’s Supreme Leader Ayatollah Ali Khamenei has accused the US and its regional allies of fomenting the Iraq and Lebanon unrest.