An Israeli flight attendant has died of measles.

Mother-of-three Rotem Amitai, 43, died on Tuesday after conducting the virus in March, according to Beilinson Hospital in Petah Tikva, Israel.

The El Al airline employee had flown from New York to Tel Aviv just days before developing a fever, but is not known if became fell ill on the flight, in the US or in Israel.

Mother-of-three Rotem Amitai, 43, died on Tuesday after conducting the virus in March, according to Beilinson Hospital in Petah Tikva, Israel

Rotem was vaccinated against the viral illness as a child ans was otherwise healthy.

In a statement her family described her as a ‘wonderful woman’ and ‘a devoted mother’.

‘We are grieving and mourning her passing before her time’ they added.

Just five days later she fell into ill and went into a coma, due to swelling of the brain, a complication of measles.

In a statement, her employer said: ‘El Al mourns the death of a member of the airline’s flight crew. 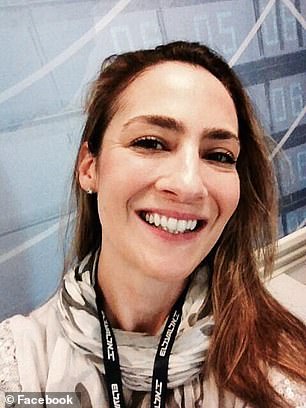 Rotem was vaccinated against the viral illness as a child ans was otherwise healthy. In a statement her family described her as a ‘wonderful woman’ and ‘a devoted mother’.

‘We have taken steps to have our air crews inoculated’.

‘We extend our deepest condolences to the bereaved family and will continue to stand by them.’

Everyone has a slight risk of developing measles because being vaccinated does not guarantee full immunity.

So far this year, 360,000 have contracted the illness globally.

Measles is common in many developing countries, particularly parts of Africa and Asia.

More than 95 percent of measles deaths occur in countries with low average incomes.

It’s very rare in the US and Israel,  there have been 4,300 cases of measles in Israel in the last 18 months.

Measles was declared eliminated in the US in 2000, but there have been more than 1100 case this year, three-quarters of which were in New York.

Outbreaks can be particularly life-threatening in countries experiencing or recovering from natural disasters or conflict.