Winemakers in northern Italy have been setting their vineyards ablaze – but for a very good reason.

Unseasonably frosty weather in the South Tyrol region has been threatening to destroy this year’s crop of grapes.

To save them, winemakers have been warming them up in dramatic fashion by positioning hundreds of flaming torches among the vines, making the landscape look like something out of a fairy tale.

A sweeping shot of the Abbazia di Novacella monastery in South Tyrol in Italy, with hundreds of torches in its vineyards creating a magical landscape

One winery that used the torches was the Abbazia di Novacella, a monastery that is among the oldest active wineries in the world.

Here, temperatures dropped as low as minus nine degrees celsius last week – its lowest May temperature in 32 years.

Stunning pictures show hundreds of torches amid its vines, creating a magical landscape.

Andreas Huber, a winemaker from the South Tyrol region, told Ansa: ‘Any more than one degree below zero and you’re really in trouble.’ 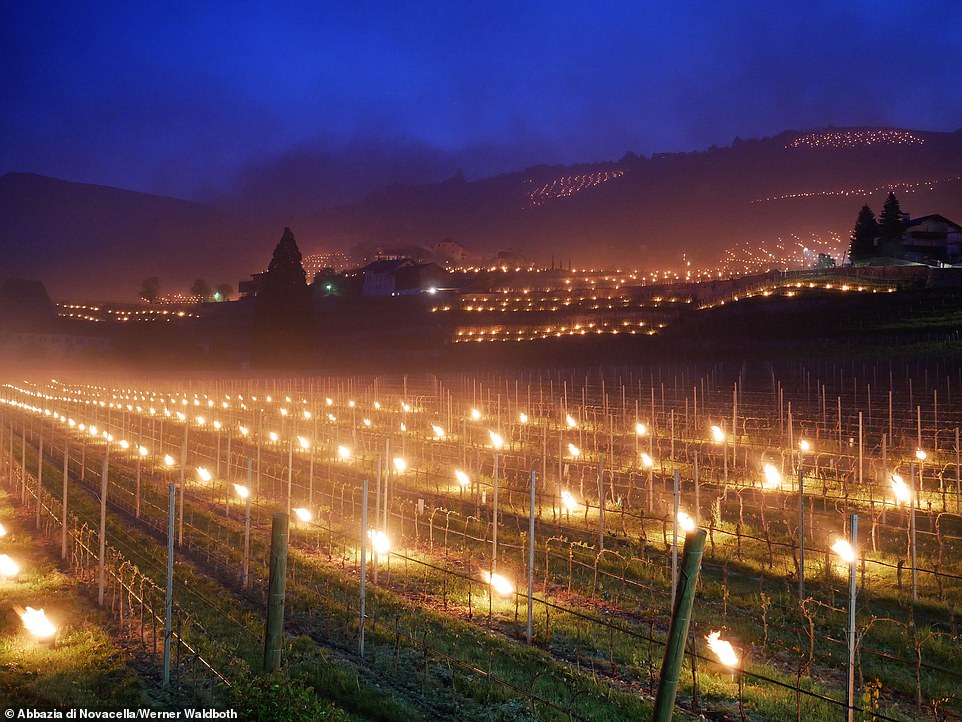 Temperatures dropped as low as minus nine degrees celsius last week in northern Italy – its lowest May temperature in 32 years. Pictured are the anti-frost torches as Abbazia di Novacella 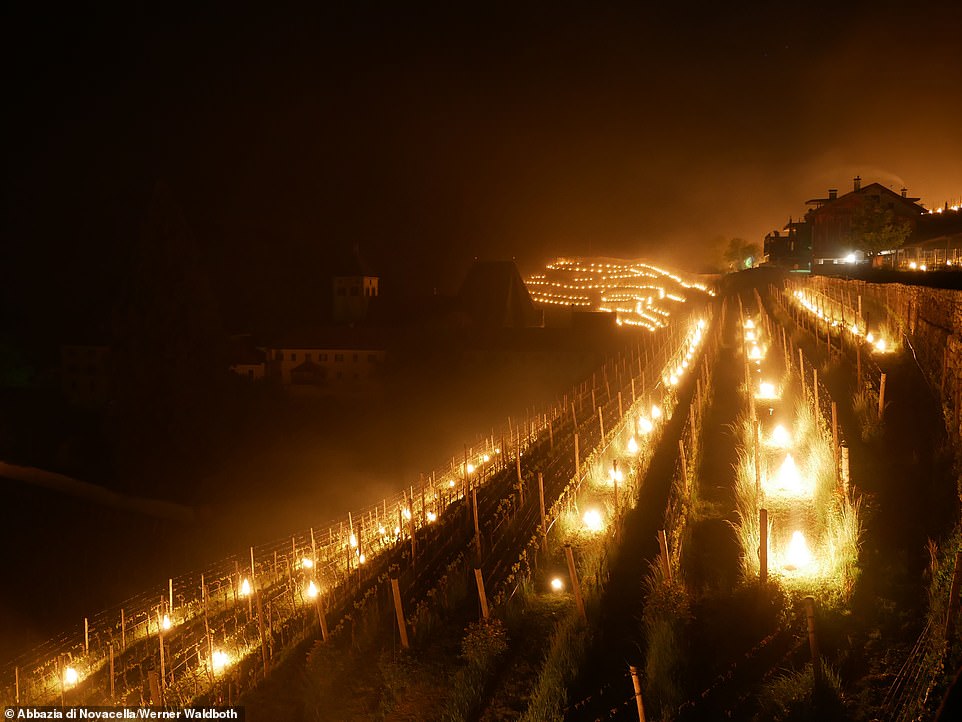 However, he added that lighting 300 of the torches across one hectare of land could raise the temperature by three degrees – enough to salvage the crops.

Wine expert Emily O’Hare, who contributes to Decanter magazine and used to be the sommelier at Michelin-starred restaurant The River Café, in London, told MailOnline Travel that placing torches among vines is a fairly common practice.

She said: ‘It’s not such an unusual thing to do – in Chablis they have been using similar techniques for years. They suffer from late spring frosts and so will place “smudge pots” – oil burners –  in between rows of vines to prevent temperatures from dipping into dangerously freezing temperatures that can cause great damage to young buds and shoots.

‘In Siena the topic of conversation is the weather – and normally it is more food oriented. But it is a real shock this May, temperatures are low – the coldest May in 60 years I have heard, and rainfall is high. Though, as one winemaker pointed out to me, because the rainfall is so high, it is rather a blessing that the temperature has stayed consistently on the cooler side as there is at least no humidity, and the risk of rot that comes with that.’

Despite the fiery efforts of wine-makers, Italian farmers union Coldiretti estimates that millions of euros worth of crops could still be destroyed due to the recent cold snap.

The Abbazia di Novacella monastery makes 700,000 bottles of wine per year – 70 per cent of them are white wines and 30 per cent are red wines.

It currently has 14 acres of vineyards as well as 30 acres of fruit orchards.

Also belonging to the monastery are 1,700 acres of forest as well as 1,000 acres of Alpine pastures.