Italians take to streets ahead of bars, restaurants and hairdressers reopening tomorrow

Italians have taken to the streets today ahead of the reopening of shops, bars, restaurants and hairdressers tomorrow, after nine weeks of lockdown.

Premier Giuseppe Conte acknowledged reopening the economy brings a risk of new outbreaks of coronavirus, but said ‘we must accept it’.

He said the nationwide lockdown that began in early March had brought ‘the expected results’, putting the country in a position to expand economic activity in the second phase of reopening.

People walk in the streets during the Covid-19 coronavirus’ emergency Phase 2 in Rome, Italy, 17 May 2020 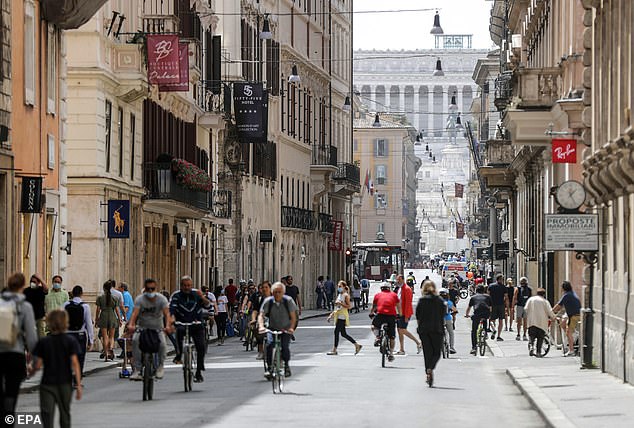 Daily life during the Covid-19 Coronavirus’ emergency Phase 2 in the centre of Rome, Italy, 17 May 2020

Shops, bars, cafes, restaurants, hairdressers and museums are among the business and cultural activities that can resume from Monday.

Gyms and swimming pools can reopen a week after. Travel between regions and into Italy from abroad will be permitted from June 3.

Mr Conte said the country must accept the risks and open before the availability of a vaccine. But he said an extensive monitoring system is in place and the government will intervene to close areas if there are new outbreaks. 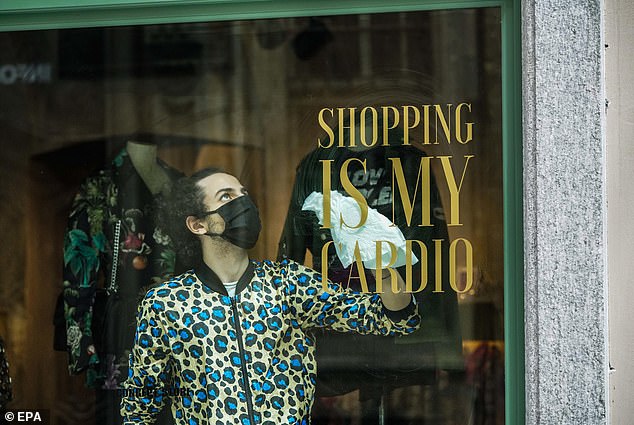 Business owners are pictured cleaning their premises ahead of opening tomorrow, Turin, Italy, 17 May 2020 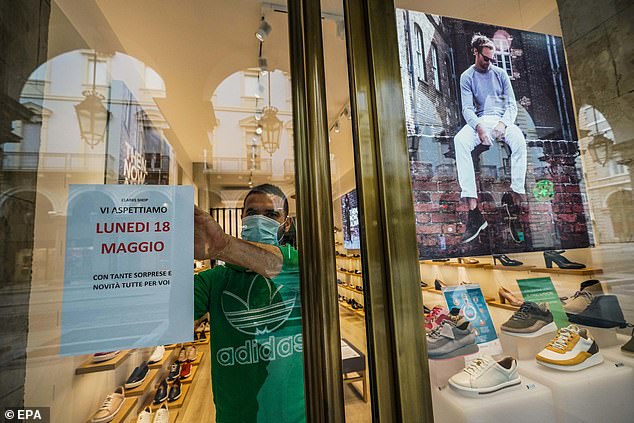 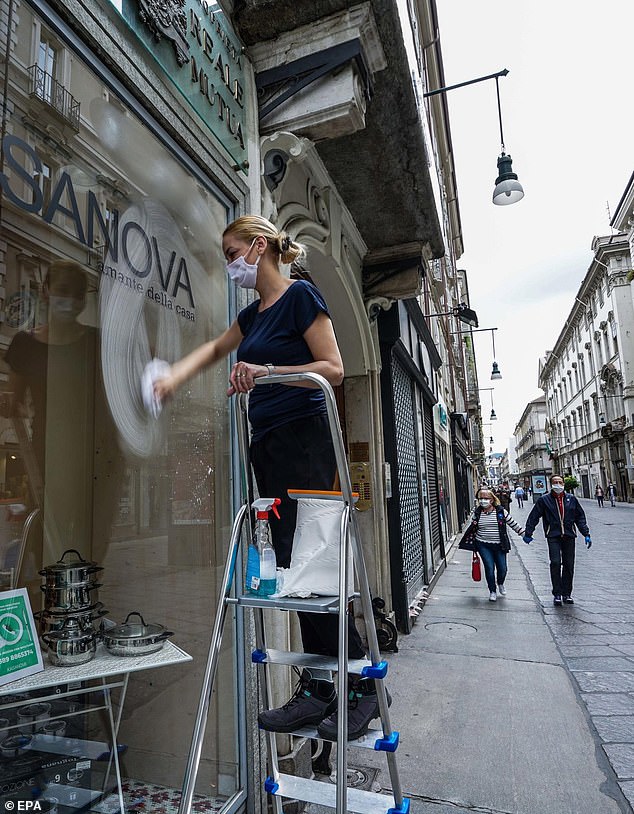 Shopkeepers prepare for the reopening of their shops on 18 May 2020 during the Covid-19 Coronavirus’ emergency Phase 2 in the centre of Turin, Italy, 17 May 2020 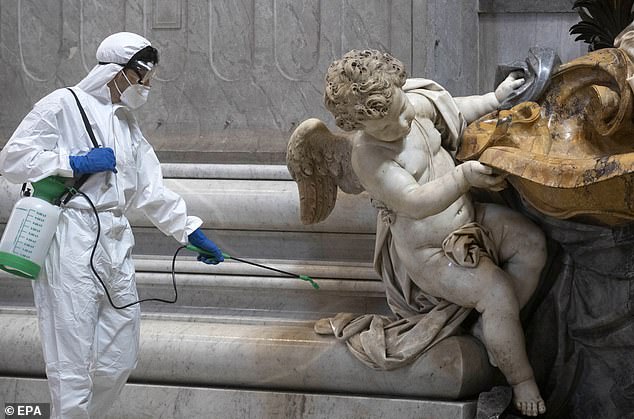 A worker clad in a hazmat suit sprays disinfectant liquid inside the iconic Saint Peter’s Basilica in the Vatican City, 17 May 2020

Over the weekend parasols and sun-loungers are starting to appear on coastlines in Italy.

‘It moves me to see these sunshades,’ said Simone Battistoni, whose family has been running the Bagno Milano beach concession in Cesenatico on Italy’s east coast since 1927.

The hunt for a vaccine for a disease that the World Health Organization (WHO) says may never disappear has also threatened to become a source of tension between the globe’s haves and have-nots, with trials underway in various countries.

Some European countries cannot afford to wait, however, and this weekend marks the first tentative steps of bringing public life back to a more recognisable level. 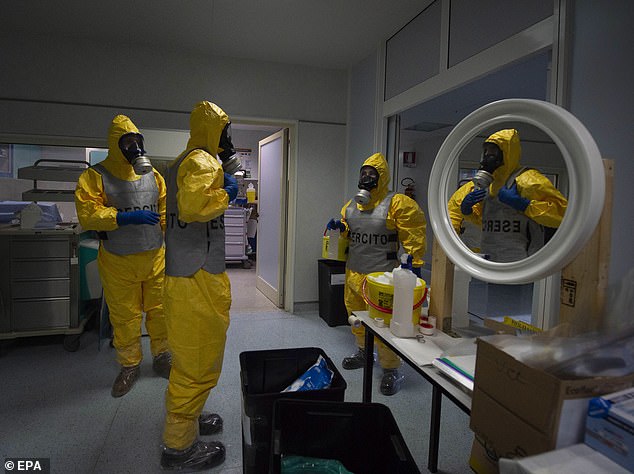 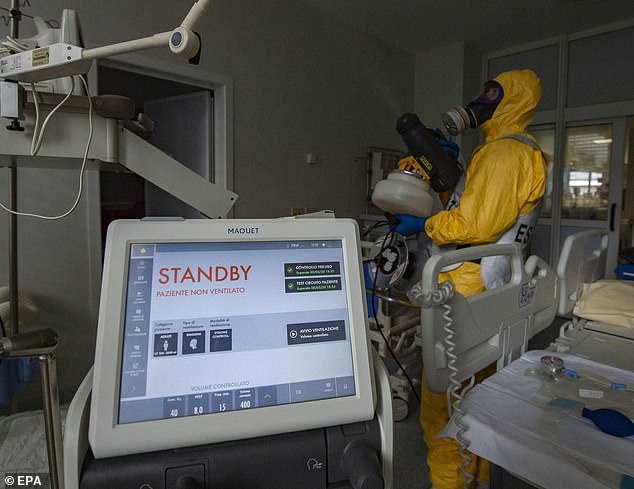 An unused ventilator machine can be seen as a  soldier clad in a hazmat suit disinfects the now-empty intensive care unit in Saronno Hospital in Saronno, northern Italy, 17 May 2020 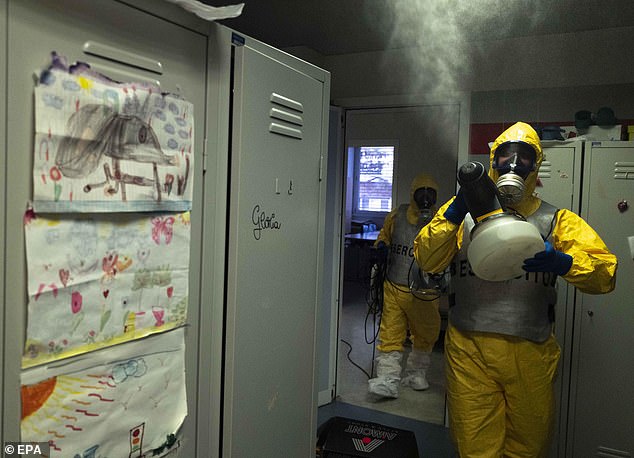 Soldiers disinfect staff lockers, some with children’s drawings, in Saronno Hospital, 17 May 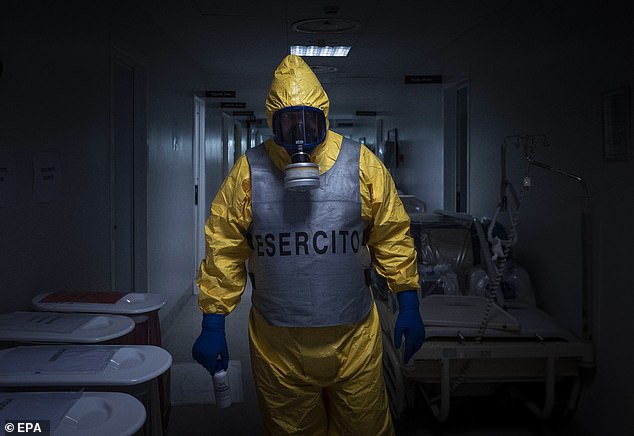 In France, the first weekend after the strictest measures were lifted saw many venture out into the spring sunshine – and hit the beach.

The country called for self-restraint ahead of this weekend warning that police would break up any large gatherings.

In the Riviera city of Nice, keen swimmers jumped into the surf at daybreak.

‘We were impatient because we swim here all year round,’ said retiree Gilles, who declined to give his full name. 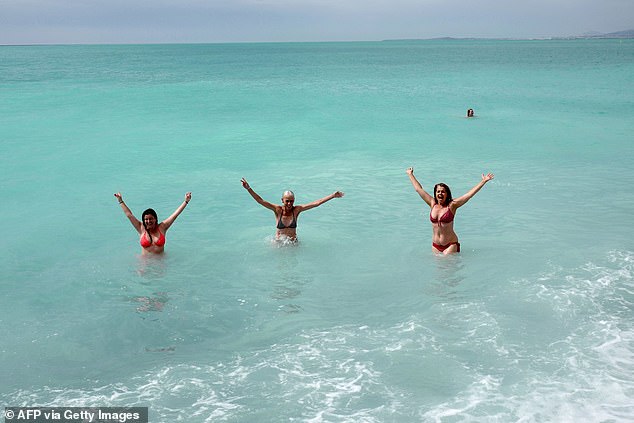 Women react as they stand in the sea during the re-opening of some Mediterranean beaches along the French Riviera city of Nice, southern France, on May 16, 2020 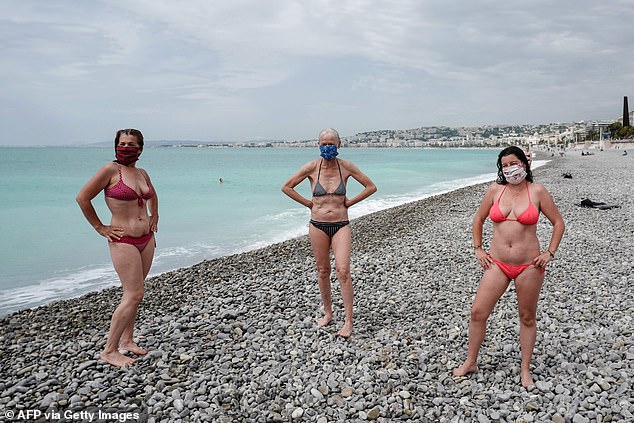 Women wearing protective face masks pose on the beach after a swim during the re-opening of some Mediterranean beaches along the French Riviera city of Nice, France, on May 16 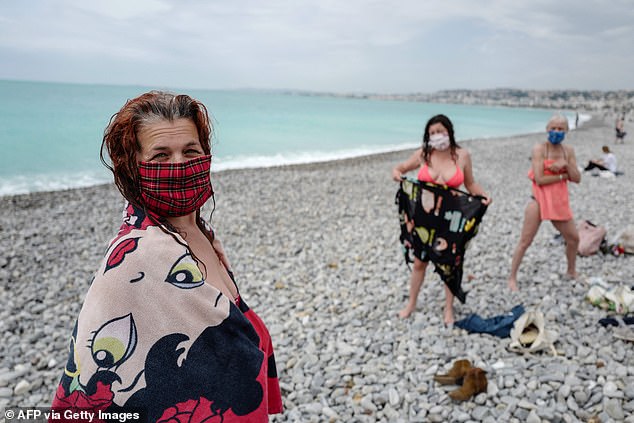 Women dry off after a swim during the re-opening of some Mediterranean beaches along the French Riviera city of Nice, southern France, on May 16, 2020 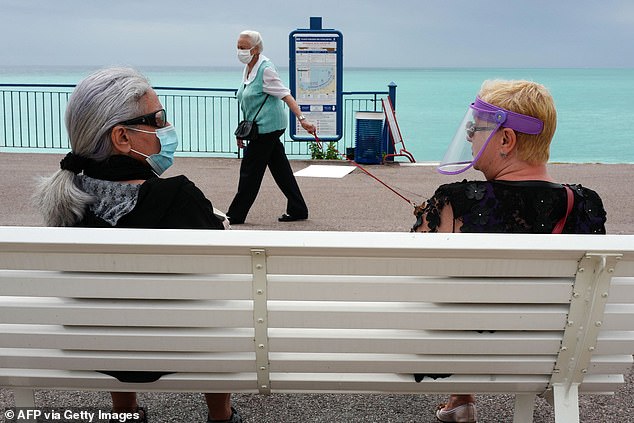 Women wearing a protective face mask or visor chat while sitting on a bench at the ‘Promenade des Anglais’ in the French riviera city of Nice, southern France, on May 16, 2020

With the threat of a second wave of infections on their minds, authorities in many countries have asked people not to throng public spaces like beaches as they are made accessible again.

Sweden urges Denmark not to discriminate when opening borders

Denmark is set to announce how it will reopen its borders with Germany, Norway and Sweden from June 1.

The Danish government’s leading Social Democrat party has called for a synchronised reopening of the borders with Sweden, Norway and Germany.

While Danish opposition parties have said they do not want to open borders to Sweden until it is ‘justifiable from a health point of view’, reports The Local, Sweden.

Danes are still able to travel across the border to Sweden but are asked to spend 14 days in isolation on arrival.

Sweden’s Minister for Nordic Cooperation Anna Hallberg told Sydsvenskan newspaper: ‘We do not think it is acceptable for one country to discriminate against another in terms of open borders in the internal market.’

On Thursday, Danish foreign minister Jeppe Kofod told DR: ‘We have a dialogue with our neighbouring countries about entry restrictions and the border issue.

‘We are still very concerned and very cautious. We are in the process of new phases of the reopening, so there are a number of elements around it. But we will come up with an answer to that before June 1.’

On Saturday some of the country’s most famous surf spots on the south coast resumed business as usual, with the public taking back to the sands despite general apprehension.

With the European summer fast approaching, the key tourism industry is trying to salvage something from the wreckage.

In a statement, France’s health ministry said the figure had fallen slightly from 104 fatalities on Friday. This brings France’s total to 27,625, the fourth-highest tally in the world, after the United States, Britain, and Italy, and just ahead of Spain.

Both numbers – key indicators for the French health system’s ability to cope with the epidemic – have been on a downtrend for four to five weeks and peaked at over 32,000 and over 7,000 respectively in early to mid-April.

In Spain  Prime Minister Pedro Sanchez said he will ask Parliament for what he hopes will be the last extension of a state of emergency to battle the pandemic, until around late June.

Tourism, which accounts for 12% of GDP, looks set to lose its critical summer season.

Meanwhile Russia, who has the world’s second highest number of cases, has relaxed border restrictions for athletes and coaches in a move that will help football to restart in the country next month.

Since March, Russia has barred most foreign arrivals in a bid to stem the spread of the coronavirus. 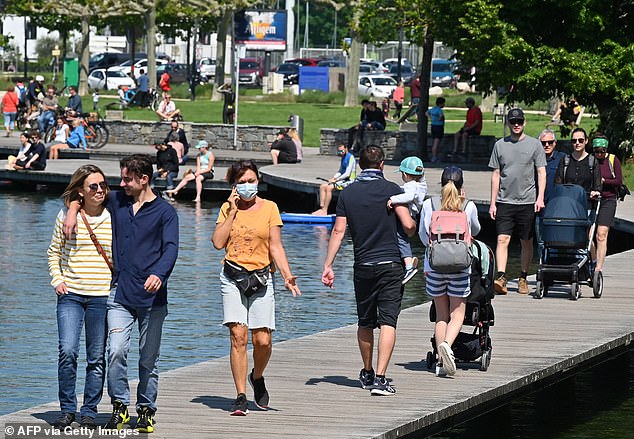 People walk along the banks of Lake Annecy on May 17, 2020, in Annecy, as France eases lockdown measures taken to curb the spread of the COVID-19 pandemic 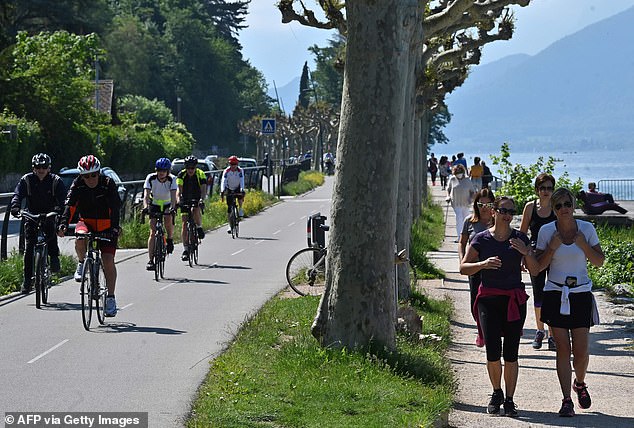 People walk and ride their bicycles along the banks of Lake Annecy on May 17, 2020, in Annecy, as France eases lockdown measures 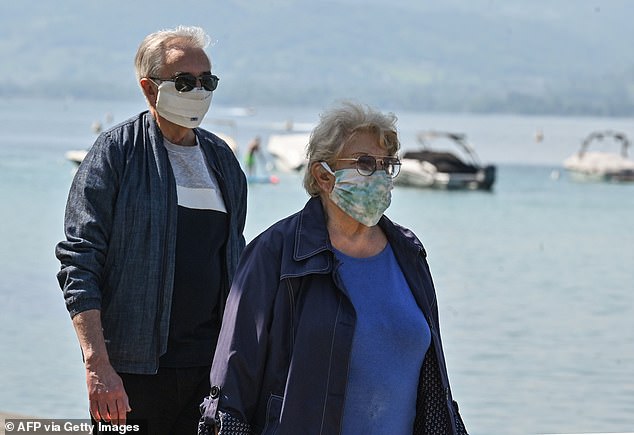 Two senior citizens wearing protective masks walk along the banks of Lake Annecy on May 17, 2020, in Annecy, France 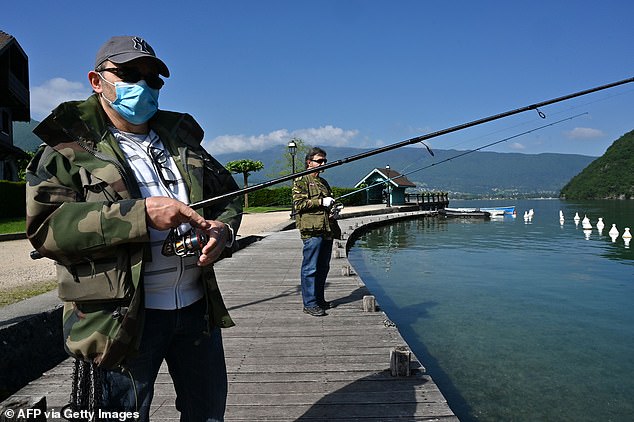 On Monday Vladimir Putin, 67, announced that Russia’s six week lockdown was over, sending workers back to factories and building sites  – Putin is himself in isolation in his residence outside of Moscow, reports The BBC.

Now the government says athletes and coaches will be allowed in if they have a contract with a Russian sports team or organisation. Anyone who returns will have to spend 14 days in isolation on arrival and will be observed by doctors.

The Russian Premier League aims to restart on June 21, although some of its foreign stars headed home during the outbreak and have yet to come back.

By Rita Sobot for The MailOnline

Spain is to be hit by SALES fever tomorrow after the government finally gave the go-ahead but shops have been warned: ‘Avoid creating CROWDS!’

The annual sales campaign is always a massive part of the Spanish economy and becomes even more so since businesses have been unable to open since the State of Emergency was declared on March 14th. However, there has been criticism of ‘unclear advice’ from the government with the Ministry of Commerce saying the sales could go-ahead on May 18th as part of the de-escalation plan, but the health department saying they couldn’t because of the health risk.

Now, the government has published an order which confirms the sales CAN start on Monday in all regions of the country. Appointments won’t be necessary and it doesn’t matter what phase of the de-escalation phase they are in. This allows the inclusion of Madrid and Barcelona which are not yet fully in phase one. 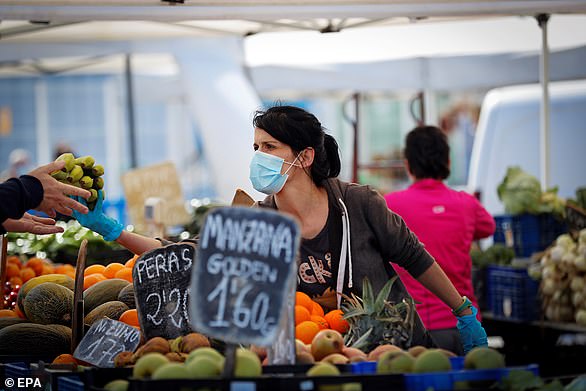 A vendor wearing a facial mask sells fruits at Landaben street market in Pamplona, Spain, 17 May 2020

However, the Ministry of Health has expressly banned any hint of a crowd and sales the shops would need to close their doors immediately if the number of customers got out of control.

They say there will still have to be limits in the shops, social distancing measures and stewards on the door to allow only a few people in at a time.

Massive bargains of up to 80 per cent are being anticipated and if queues form outside the doors, they too will be two metres apart. A priority one hour period will have to be allocated for shoppers over the age of 65.

Business organisations had lodged strong protests at the first ruling, saying they had two months of accumulated stock to get rid of and desperately needed the income.

Spain has four de-escalation phases to take the country up to its ‘new norm’ by the end of June. Different regions are entering specific phases at different times, depending on the evolution of the coronavirus pandemic within those zones. Most are now in phase one.

Today’s coronavirus death toll in Spain is 27,650, which showeda 24-hour increase of 87, the first time the figure has been below 100 since March 9th.